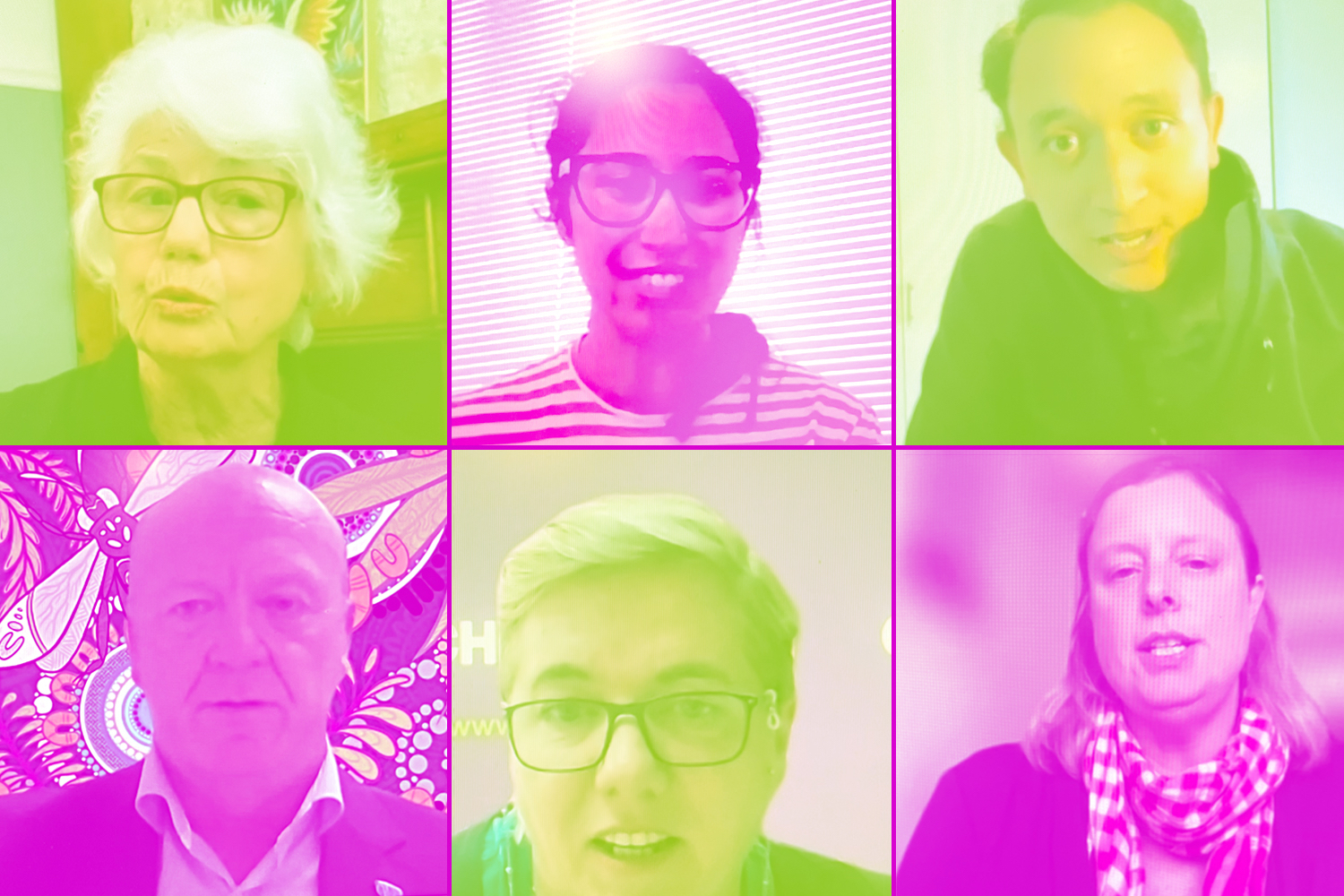 Introduction by Croakey: In reflecting on the recent federal budget, health experts have sent a strong message to the Federal Government that it cannot ignore the urgent need for structural and systemic change to address the fragmentation of health and social services.

They also highlighted the need for a greater investment in prevention and a focus on social determinants, according to a lively discussion at a Croakey webinar this week.

Genuine structural health reform and investment in prevention were two of the main talking points at a Croakey webinar on the Budget, healthcare and health policy this week.

Panel moderator and Croakey editor Jennifer Doggett suggested that governments had a habit of “kicking the can” of real health reform down the road.

Croakey columnist and Adjunct Associate Professor Lesley Russell issued a challenge to Health Minister Mark Butler, asking whether he is up to the task of leaving a legacy as solid as that of former Labor Health Minister Dr Neal Blewett, who receives a number of honourable mentions in ‘Top 10 public health successes over the last 20 years’.

The panel of community and public health experts who spoke at the webinar were largely in agreement that while the Albanese Labor Government’s first Budget held some promising news for health, they hoped it was a precursor to a 2023 budget that was stronger on health reform and prevention.

Russell emphasised that “this Budget is in fact unique” and we need to view in the context it was delivered – promptly after being newly-elected, addressing election promises and as an assessment of the financial situation Labor were left from the Coalition Government.

Dr Elizabeth Deveny, the new CEO of Consumers Health Forum, suggested that in “very challenging global economic times”, it was difficult to predict the likelihood of “real outcomes, real results in the main Budget” next year.

Abe Ropitini, Executive Director of Population Health at the Victorian Aboriginal Community Controlled Health Organisation (VACCHO), told the webinar that the commitments in the Budget for First Nations initiatives and specific allocation of funds were promising.

However, a move to a “wellbeing economy” would require a lot of reconfiguration and partnership-building, Ropitini said.

The current piecemeal and fragmented approach to delivering health services was “one of [VACCHOs] big frustrations” as funding for different services comes from different jurisdictions.

VACCHO’s 32 member organisations in Victoria deliver primary healthcare as well as address social and political determinants of health in a family-oriented and culturally safe manner, according to Ropitini.

Ropitini told the webinar that investing in cultural determinants of health is really important, particularly to equip young people “with a really strong grounding” and connection to where they come from.

Ropitini added that the cultural determinants are not specific to Aboriginal and Torres Strait Islander communities – “everyone has culture” and “strengthening connections to these expressions of culture is linked to improved outcomes in nutrition, physical activity, overall health literacy and so on”.

Doggett acknowledged that the broader health system can learn a lot from the holistic model of Aboriginal Community Controlled Organisations.

Health in all policies

True health reform is likely to require a “whole of government response”, said Deveny, who is also chair of the Australian Digital Health Agency.

“Wellbeing is impacted by almost every policy and portfolio,” Deveny said.

Consumer experiences and voices also need to form a significant part of reform discussions. Deveny told the webinar that consumers want a “single voice” to listen to them.

Supporting consumers and communities will reduce pressure on the health system, she said. An important aspect of this is urgent investment in health literacy and prevention.

“I believe that education is the most significant social determinant,” she said.

The consultation on the National Health Literacy Strategy Framework as part of the National Preventive Health Strategy 2021-2030 closed today.

Scott Willis, national president of the Australian Physiotherapy Association, added that the “whole process of the consumer journey” needed exploring. He described challenges that allied health professionals have accessing patients’ My Health Records.

Willis told the webinar that health reform should explore options for an allied health workforce strategy as integrating allied health with primary healthcare could make a big impact on reducing the burden of chronic diseases in society.

“I think it’s a no brainer for me that you need that multi-disciplinary care, especially with GPs saying that they’re under so much burden and strain and stress,” Willis said.

True reform did not involve “just pumping more money into healthcare”, he added.

Public health physician Dr Laksmi Govindasamy discussed the importance of reorienting the health system towards preventative models, which would help reduce the burden on acute healthcare.

“Although I work in the hospital system, I know that one of the major challenges we face in the emergency department is the fact that patients remain admitted for too long because they don’t have access to the services they need for safe discharge and also that ultimately the most effective way to prevent people from needing emergency services is through preventative health measures and health promotion in the long term,” Govindasamy said.

Both Govindasamy and VACCHO’s Ropitini emphasised that health promotion activities and preventative health would not work unless an appropriate workforce was trained to address broader determinants of health.

Govindasamy told the webinar that she saw two opportunities for public health in the October budget, with funding for NACCHO and consultation on Australia’s centre for disease control.

However, “the most important thing is to ensure that it’s going to address health inequity and address social determinants of health,” she said. 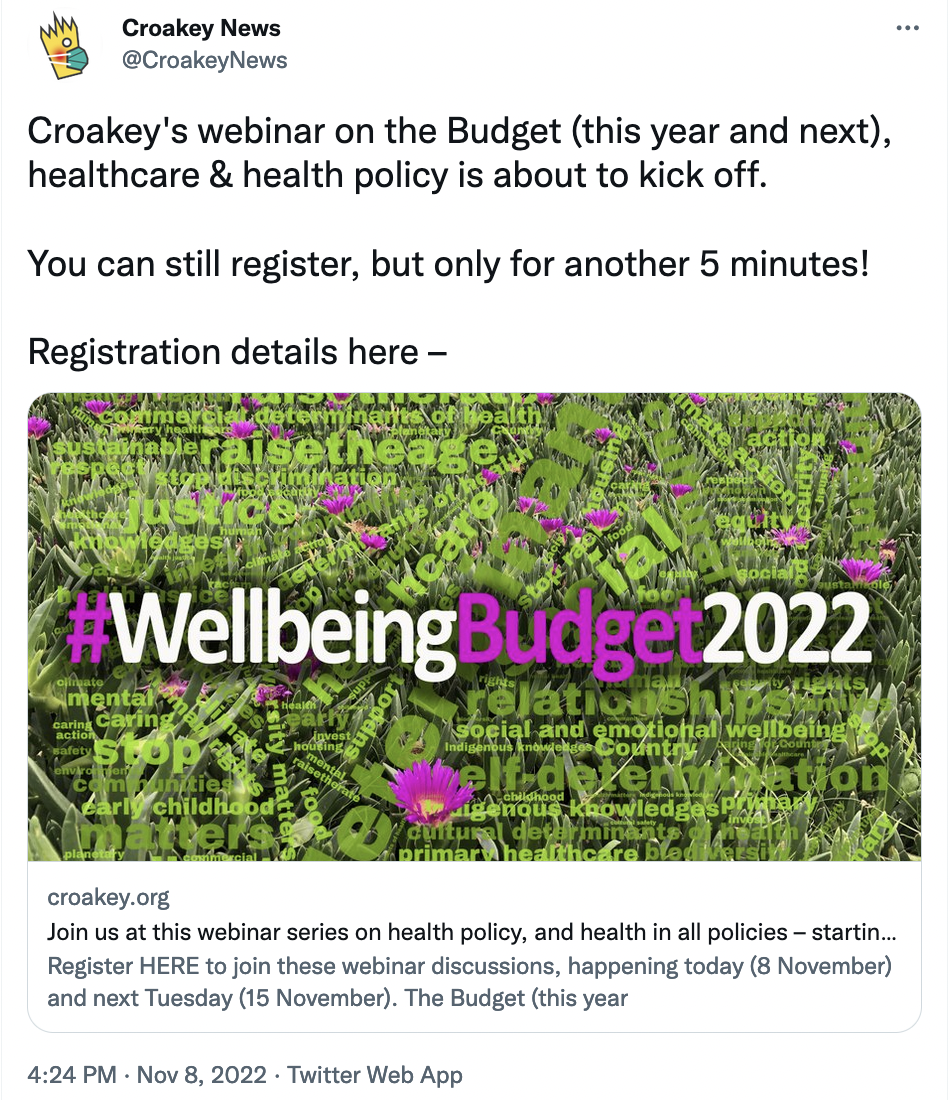 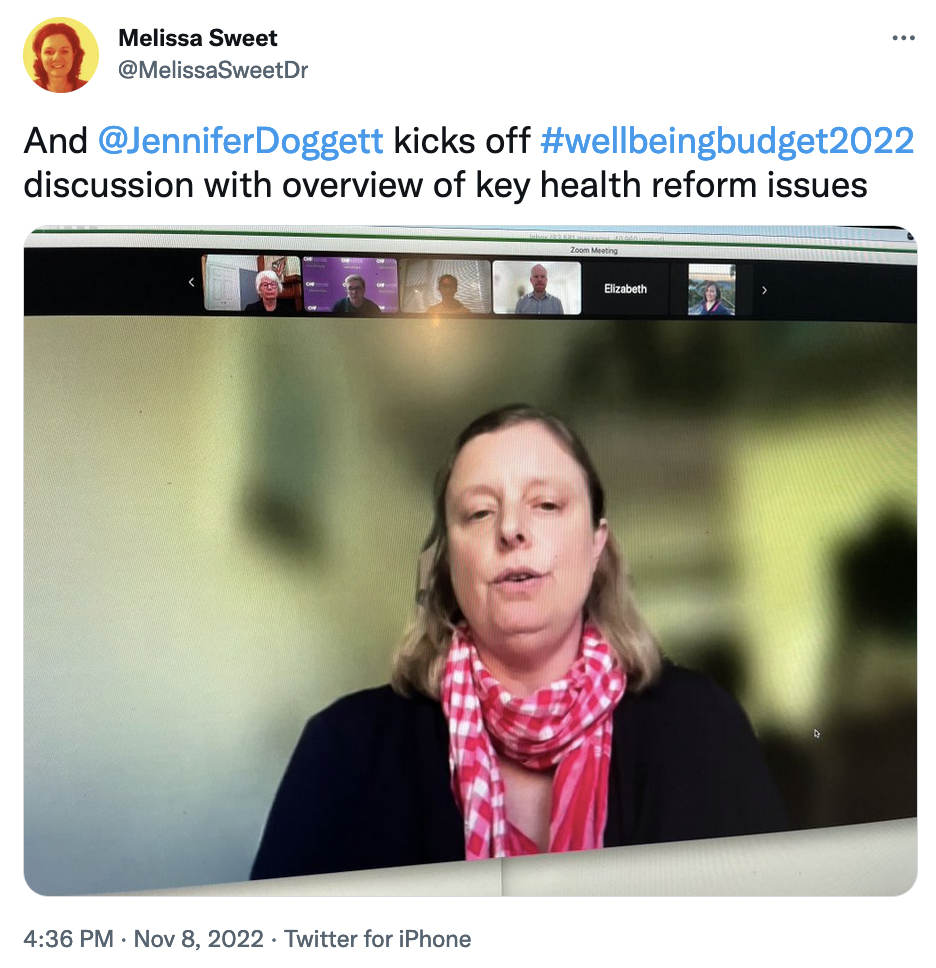 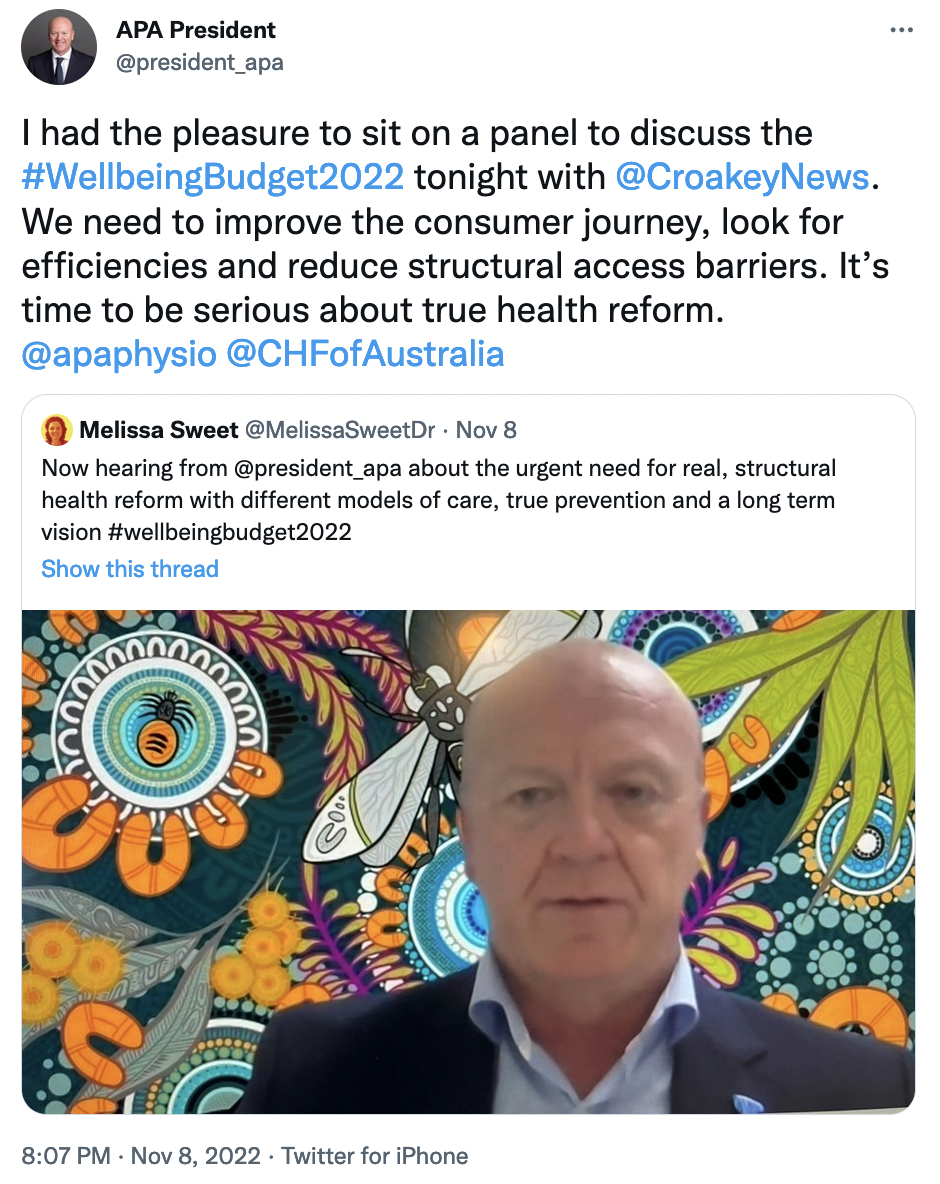 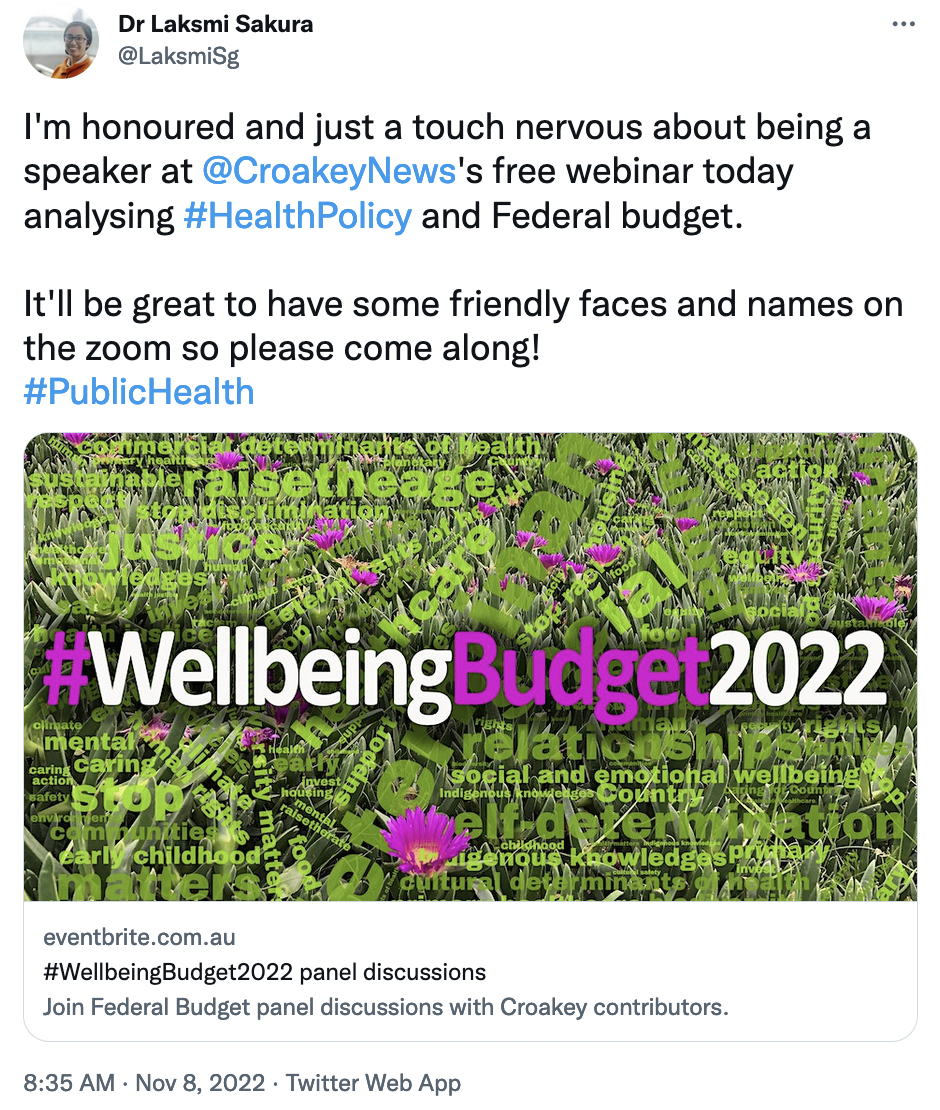 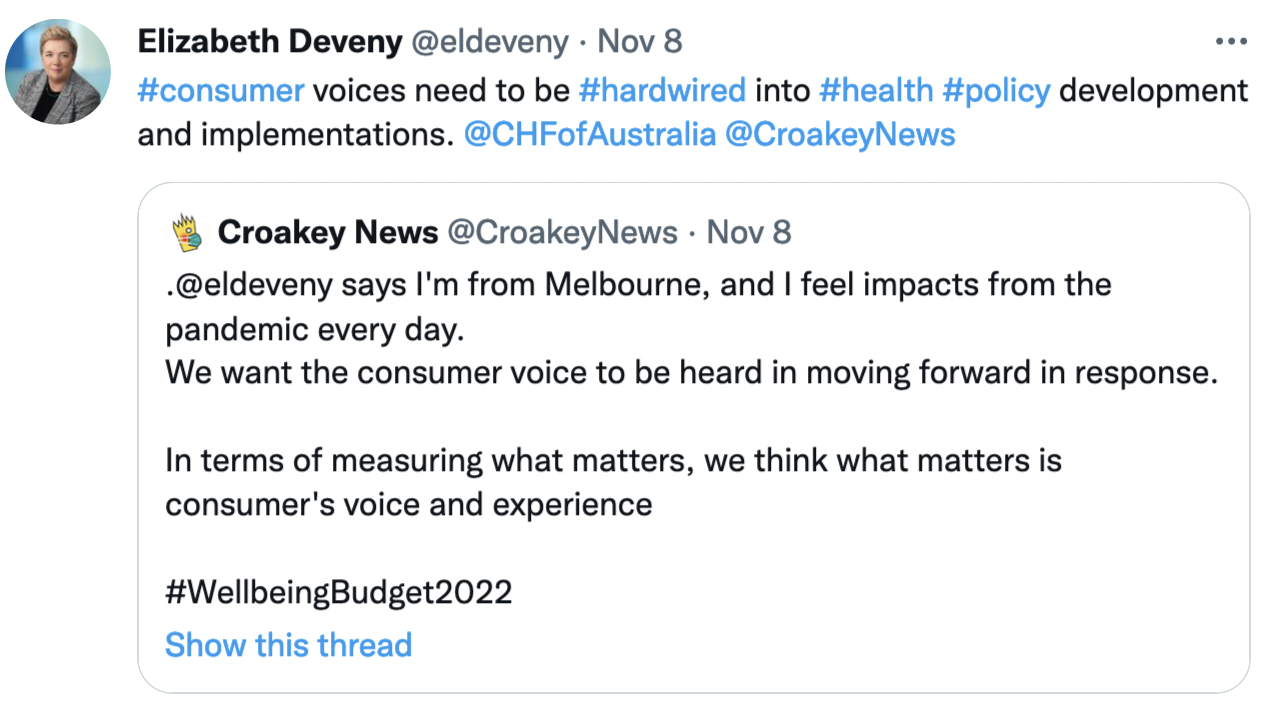 Register HERE to join next Tuesday’s (15 November) webinar discussions on health in all policies and the Federal Budget.

See Croakey’s archive of articles on healthcare and health reform.