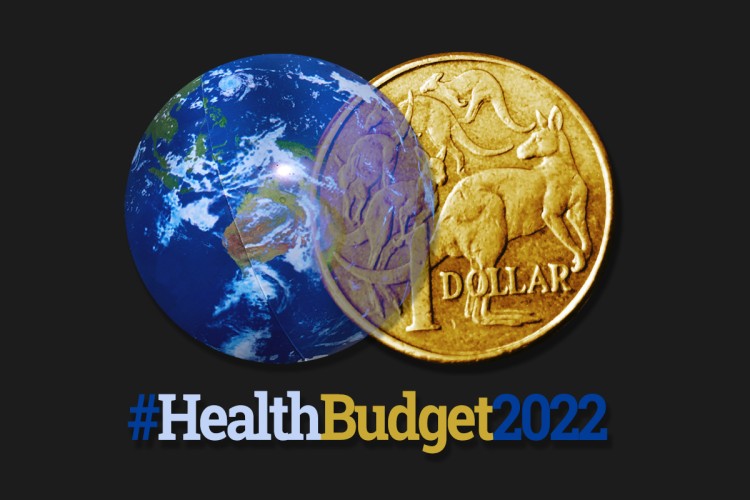 It’s time, this Budget shows, to ensure health is an election priority

On the eve of an election, many Australian voters are worried about family budgets, healthcare costs, climate change and the future of their children and grandchildren, writes health policy analyst Associate Professor Lesley Russell.

Given the Budget’s failures to address these concerns appropriately, Russell urges readers to engage with the upcoming election campaign “to let your issues and demands be known”.

The 2022-23 Federal Budget has clearly been designed to buy votes for the Coalition in the upcoming elections.

Two years of the pandemic and a series of widespread national disasters have highlighted the growing socioeconomic, health and wellbeing disparities, the importance of universal and publicly funded health and healthcare systems, that a well-supported and well-trained workforce is essential, and that prevention must be the paramount approach to improving social and health outcomes.

None of these approaches is obvious in this Budget: billions of dollars have been committed in short-term spends with an eye more on the polls than on the need to address the underlying problems. There are lots of short-term Band-Aids and a scarcity of long-term solutions.

The Morrison Government in general, and the Ministers charged with overseeing the health and aged care portfolios in particular, have shown themselves to be impervious to the evidence that the social determinants of health are as important to health outcomes as doctors and prescription pads. And there is no willingness to see investments in health and welfare as boosts to productivity and social justice.

So it’s no surprise that this Budget does nothing to address entrenched poverty, affordable housing, the impacts of climate change and social isolation. The one bright light in this area is the significant funding ($1. 3 billion) to drive change under the next National Plan to End Violence against Women and Children 2022-2032.

Even this bright spot comes with caveats: the final National Plan to govern spending is yet to emerge; there are concerns about the under-funding and under-staffing of Indigenous family violence and legal services; and the fate of the pilot program that provides support for women and children on temporary visas who experience domestic violence is unclear.

In fairness, the Health Budget is better than I anticipated. It cleverly enables the Morrison Government to claim that they have addressed the key issues such as mental health, aged care, primary care and prevention, even dental care and out-of-pocket costs.

But scrutiny shows how superficial and short-term these budget commitments are.

Morrison’s implacable refusal to respond to the States’ pleas for help for public hospitals and staff under enormous pressure means that there is nothing in this Budget for this, over and above the funds for the COVID-19 response. The Budget Papers reiterate that the Commonwealth will only meet 45 percent of usual hospital costs and the 6.5 percent cap on hospital funding growth will remain (See Budget Paper #3).

The COVID-19 public health response funding for the 2021-2022 financial year has been increased from the $410 million allocated in last year’s Budget to $4.9 billion, reflecting the huge hospital costs of the Delta and Omicron waves of infection. A further $934 million is provided for 2022-2023.

The Budget includes $468.3 million over five years for what is described as part of the ongoing response to the Aged Care Royal Commission and a further $458.1 million (most of this for 2021-22 and 2022-23) to address the ongoing impacts of the pandemic.

While there is an investment in aged care training places, there is nothing to improve aged care wages, which are crucial to attract and retain well-qualified staff. The only new announcement was $340 million to embed pharmacy services in aged care homes with the aim of improving medication management.

The Budget announces that, beginning from 1 October 2022, the Aged Care Funding Instrument will be replaced with the new Australian National Aged Care Classification funding model.

On the surface, this is good news. However, recent reports of the failure of many facilities to spend the $10 per resident per day Basic Daily Fee supplement on residents’ food and other needs highlights the lack of transparency in the sector and the consequences of simply handing over additional funds with no subsequent monitoring as to how they are spent.

It is very clear that much more resourcing – dollars, staff and oversight – than currently provided is needed to ensure that our frailest, oldest citizens can live out their final years in safety, comfort and dignity.

The media releases about these provisions all spend many words lauding the Morrison Government’s spending on mental health since 2012-13. There is no mention of the fact that the majority of funding from last year’s budget, to be allocated to the states under the National Mental Health and Suicide Prevention Agreements, is yet to go out – only NSW, the ACT and the Northern Territory have reached agreements with the Commonwealth.

My initial reaction to the announced provisions is that there are no mechanisms to ensure that people with the greatest need are able to access affordable mental health services in a timely fashion.

There is a heavy reliance on current delivery approaches such as headspace, phone help lines and the Better Access program, and there is nothing to address the shortage of acute care beds and the need for more rehabilitative and step-down care.

The Morrison Government has very belatedly tipped out the final version of the much-vaunted 10-Year Primary Care Plan with the Budget.

This timing makes it difficult to quickly check that the initiatives delivered under the heading “Strengthening Primary Care” ($230.7 million over five years) are in fact responsive to the Plan. They appear as a hodge-podge collection lacking strategy, sustainability and supports, with no attempt to introduce new models of care as recommended.

The accompanying media release is equally confusing. It bundles together a raft of earlier initiatives in an attempt to look like money has been spent and presents the telehealth Medicare items introduced in response to the pandemic (now made permanent) as the key effort at primary care reforms.

The draft Plan recommended voluntary general practice enrolment as a way to ensure better management in the community of patients with chronic and complex conditions, and the 2019-20 Budget committed $448 million to do this. Mark this down as yet another unaddressed announcement.

As noted in my introduction, the Morrison Government has a blind spot when it comes to primary prevention to improve community health. This is perfectly exemplified when you examine what is funded under the rubric of “Preventive Health” (see Budget Paper #2 pages 75-77).

There is $170.2 million over five years for a raft of secondary preventive health measures such as cancer screening, men’s health programs, health checks, and drug and alcohol interventions. Many of these are continuing programs so it is not clear how much is new funding.

There is also $30.1 million over four years for the implementation of the National Preventive Health Strategy 2021 – 2030. This includes $8.6 million in 2022-23 to continue initiatives preventing and treating blood borne viruses and sexually transmissible infections (it’s not clear what the driver is here).

In reality this leaves $5.5 million a year to implement this much-needed Strategy.

The scope of the current Government’s ambitions are shockingly small and seemingly confined to committee work: $0.7 million to develop a National Nutrition Policy Framework; $0.6 million for a feasibility study of non-medical prescribing in Australia; $0.5 million to undertake a feasibility study on safeguarding children from unhealthy food and drink advertising; and $0.2 million to update physical activity guidelines for adults and older Australians.

Affordable access to dental care is a long-standing problem worsened during the pandemic. In typical form, the Morrison Government has renewed the National Partnership Agreement for Adult Public Dental Services for just one additional year at current funding levels.

It’s ironic that this is listed under actions to support the 10-Year Primary Care Plan! But it does mean the Coalition can say they have addressed dental care. 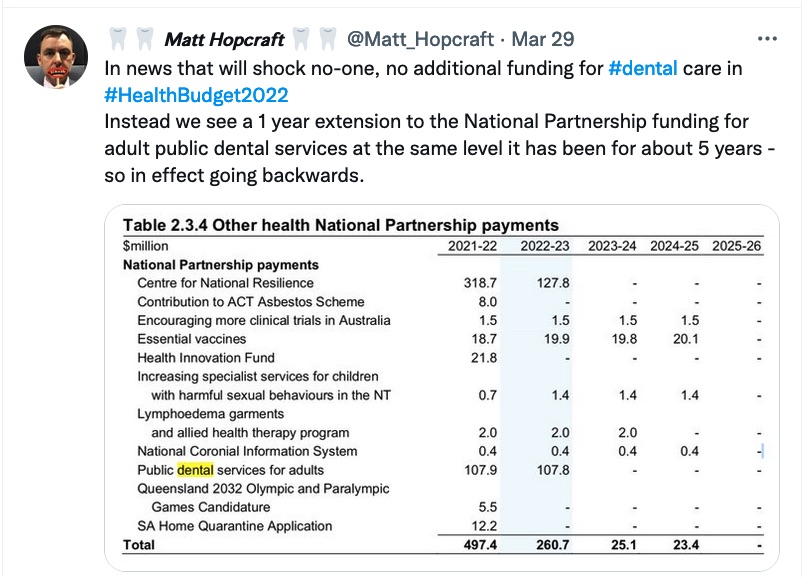 The Budget has responded to reports that many people are unable to afford their prescription medicines by reducing the safety net threshold of the Pharmaceutical Benefits Scheme. While the reduction of the threshold by 12 scripts for concession card holders should make a real difference, the threshold for general patients is reduced by only two scripts.

At the risk of looking a costly gift horse in the mouth ($525.3 million over four years), this type of initiative would have been better targeted to those who routinely require multiple medications and for whom even one month of prescriptions is a financial burden.

The funding gap in Aboriginal health is estimated to be $4.4 billion ($5,042 per Aboriginal and Torres Strait Islander person), with the Commonwealth’s share of this shortfall at $2.6 billion.

In the face of the continuing lag in addressing the goals and targets to Close the Gap, a Budget that offers only continued funding for Puggy Hunter scholarships (a scheme established twenty years ago) and $2.4 million for flood-affected Community Controlled Health Organisations (presumably funded from the $254.4 million CTG health infrastructure measure announced by Morrison in August 2021) is unconscionable.

There is nothing in the Budget for Indigenous housing, for Indigenous legal services, to address rates of Indigenous incarceration and to mitigate the impact of climate change on living conditions in remote communities.

The pandemic has highlighted the strong links between inadequate housing and poor health outcomes related to the transmission of infectious diseases – not just COVID-19 but also trachoma, rheumatic fever and otitis media. None of these diseases can be controlled and eliminated in the absence of appropriate housing and sanitation measures. 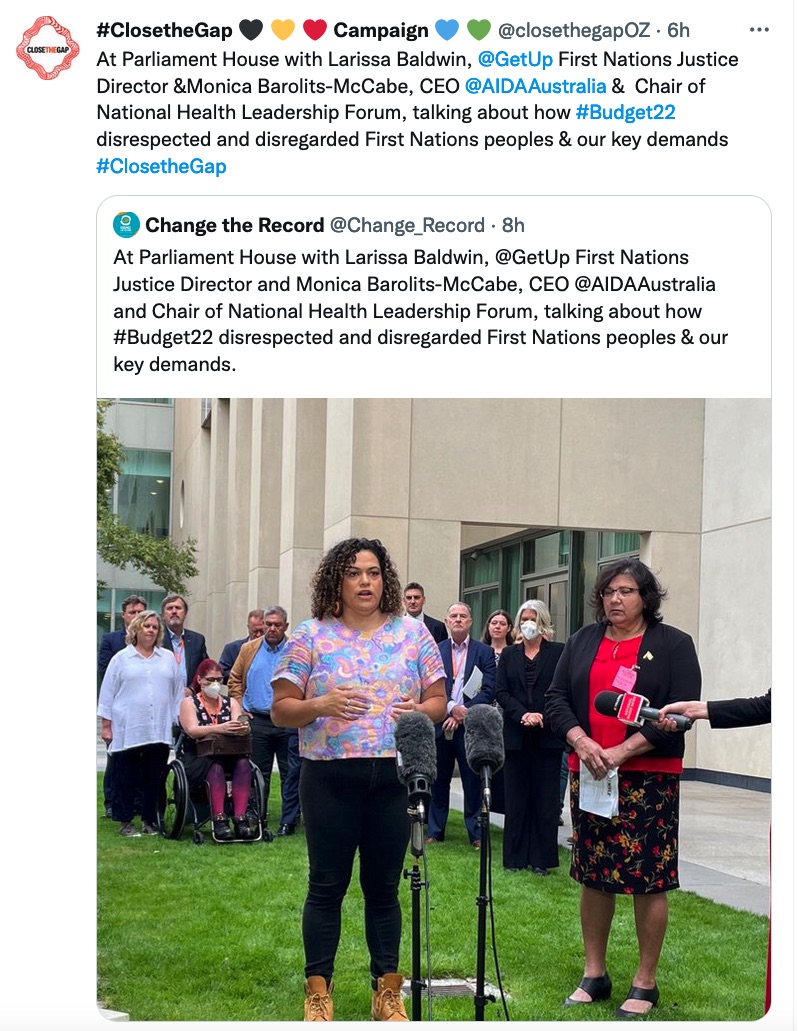 There’s a current theme echoing in the Budget comments compiled by Croakey and the article from my Croakey colleague Charles Maskell-Knight: this Budget is a lost opportunity in health to take what has been learned during the pandemic, along with the raft of expert recommendations for meaningful reforms (many of these in reports and review commissioned by the Morrison Government), and turn them into action.

This moment, on the eve of an election, sees Australian voters worried about family budgets, healthcare costs, climate change and the future of their children and grandchildren.

This is an ‘It’s Time’ moment – as so many Independent candidates have grasped – and it’s now up to the major parties to outline how they will respond to voters’ concerns and invest in health and the healthcare system.

If you are among those who feel let down by the 2022-23 Federal Budget, the next few weeks of the election campaign provide your opportunity to let your issues and demands be known. Then the parties and their leaders can expect voters’ judgement on their responses at the ballot box in May. 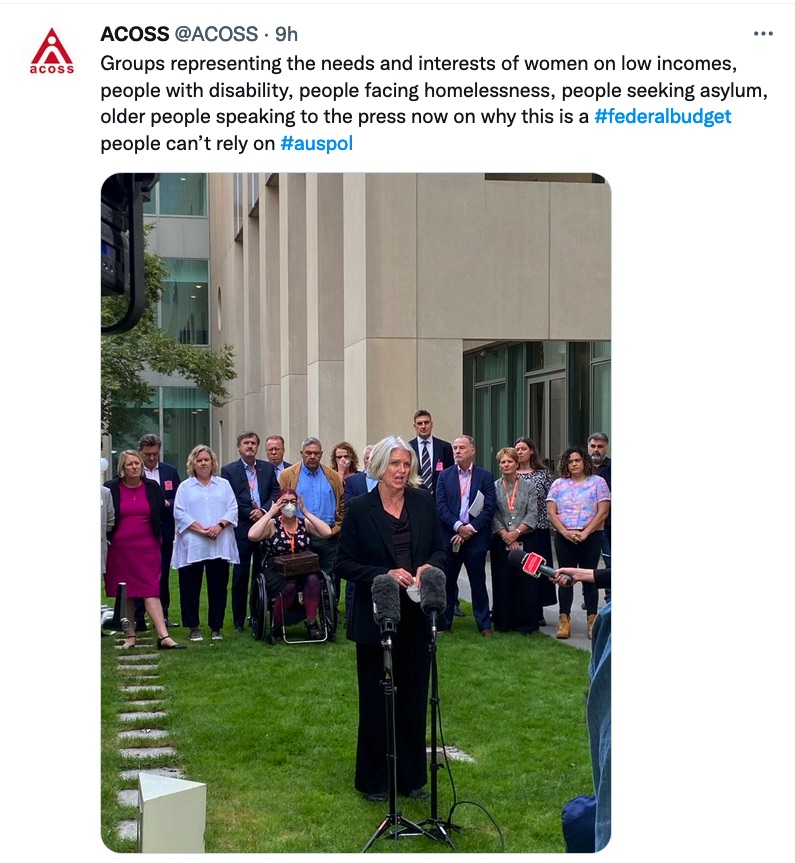 See Croakey’s extensive coverage of the Federal Budget and health

PrevPreviousPart three of wrapping reaction to Federal Budget; it fails so many health tests
NextFederal Budget under fire from those at the front-lines of climate changeNext