Jean Kittson on laughing, dying and the importance of palliative care

Palliative care and comedy may not seem like a natural partnership – but attendees at the upcoming 12th Australian Palliative Care Conference will get a dose of humour, along with a wealth of information on key current palliative care issues, courtesy of one of Australia’s best known comedians, Jean Kittson.

Croakey moderator Jennifer Doggett caught up with Jean Kittson as she prepared her material for this year’s conference, and found out why she is looking forward to spending another three days talking (and laughing) about dying.

What does comedy have to do with palliative care? 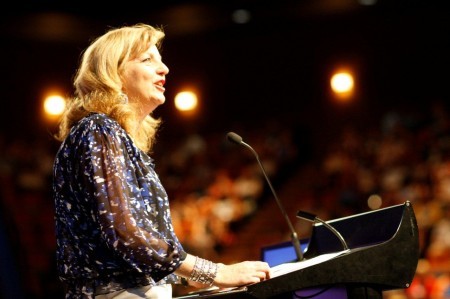 Actually palliative care and comedy are much closer than you might think.

The people I’ve met who work in this area all have a wicked sense of humour.

But having a sense of humour about dying doesn’t mean trivialising or being flippant about serious issues but rather seeing them in a humorous light.

Grief and humour are actually very closely related – it’s the ‘if you don’t laugh you’d cry’ syndrome.  We can be very uncomfortable talking about death and comedy can help cut through that discomfort and reveal some important truths.

In fact, humour can often be used to deliver serious messages that would be rejected if communicated in other ways.  Humour helps people relax and can break down the barriers we have around difficult issues.

What were the highlights for you of the last Palliative Care Association Conference?

I had an amazing experience at the last conference as three days beforehand my mother-in-law died unexpectedly. So I came to the conference in a state of shock and grief and dealing with the very same issues that were being discussed. I hadn’t had much experience of death prior to this and didn’t know much about palliative care or the dying process. During the conference I went through my own personal journey as I dealt with the death of my mother-in-law and the people I met and talked to at the conference helped me so much on this journey.  There are some amazing people working in this sector and I learnt so much from them.

Why is palliative care ‘everyone’s business’?

I do remember as a child my family cared for my grandparents while they were dying and how little support and education we had about the process. I don’t remember anything like palliative care being provided in those days, in fact, it was very primitive.  I think we’ve come a long way since then and know much more about how to provide appropriate care for people who are dying and how to support their families. The more we know the better prepared we can be when we have to deal with death and dying in our own lives.

But despite this, there is still a need for more communication and education about palliative care for everyone in the community.  For example, I also didn’t know much about how pain relief works until I attended the last conference. I always thought that you should hold off asking for pain relief for as long as possible and that the longer it was put off the better. This is often what people from the older generation do – they have been taught to that it’s good to be stoic.  But I learned that it’s actually best to have pain relief early and that the longer people put up with pain the harder it is to deal with.  That is something that patients really need to understand and communicate to their doctors.

It’s also really important that the health system as a whole becomes more focussed on palliative care issues and that health care providers are prepared to respond to consumers’ needs in this area. For example, hospitals need to be aware of advanced care directives and ensure they follow them.  I know of cases where people have been subjected to quite traumatic and interventionist treatments despite having made a clear decision that they just want palliation. I know from personal experience that it is still hard to get big hospitals to talk about advanced care plans and this is something that we need to change.

Should we laugh more about dying in our society?

Death is a scary issue for most of us. We all have to deal with it at some stage but we often don’t want to talk about it. But there are some amazing people who work in this area who can help demystify it for the rest of us.  They are extraordinary people who work on an issue that the rest of society tried to avoid.

I think it’s important that we all try to get more comfortable talking about dying so that we don’t pass on this fear to our children.  Finding the comedy – even if it’s black comedy – in dealing with death and dying can help everyone confront what is a very natural part of life.

Jennifer Doggett will be covering the 12th Australian Palliative Care Conference, from 3-6 September in Canberra, for the Croakey Conference Reporting Service.

For further information and registration see the conference website.

Part three of wrapping reaction to Federal Budget; it fails so many health tests