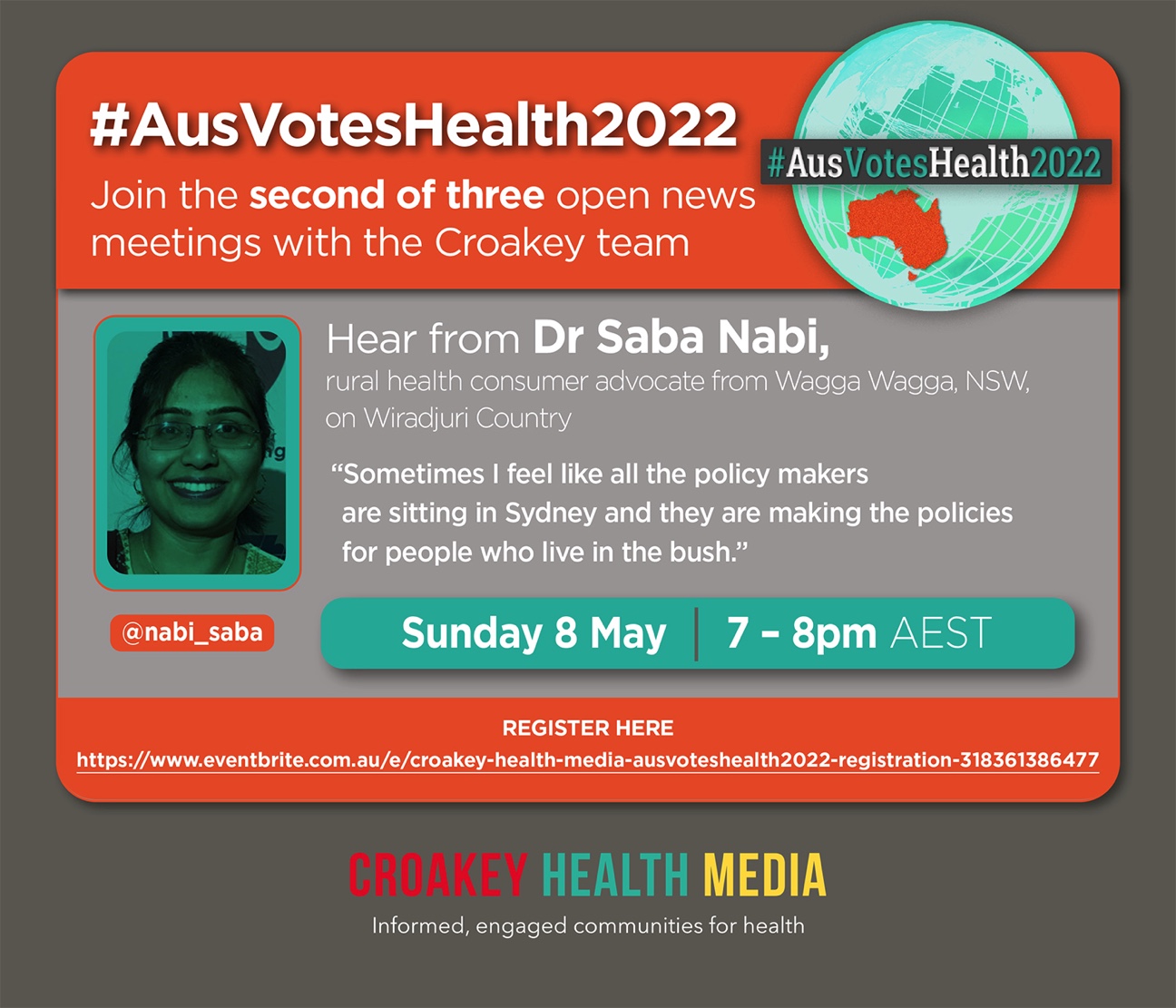 Please join us to talk #AusVotesHealth2022

Join the Croakey team this Sunday evening, to talk election and health matters

This Sunday evening, please join members of the Croakey team for the second of three open news conferences in the lead up to the Federal election.

We will begin with a short presentation by a rural health consumer advocate, Dr Saba Nabi, who lives in Wagga Wagga, NSW.

We want to hear from contributors and readers about the important health issues this election campaign, and are especially keen to hear about local developments and concerns.

Register here to join the Zoom discussion, from 7-8pm AEST, on Sunday, 1 May.

At the first of these meetings, on 1 May, Associate Professor Lesley Russell gave an overview of the major parties’ policies so far, concluding that “so far as healthcare is concerned, it’s a bit of a policy vacuum”, although she was hopeful that a Labor Government would act on the social determinants of health and prevention, noting their support for the Uluru Statement from the Heart, and gender equity.

Participants had varying views about the implications of the Independent candidates. Russell saw their emergence as hopeful with their collective focus on climate action, transparency in government, addressing corruption in government, managing the impacts of the pandemic and on more compassionate policies. She noted their potential to take votes away from the Greens and Labor. She expected Independent candidates would be an ongoing feature of the Australian political landscape beyond this election. Russell thought the election outcome “too close to call”.

An allied health advocate said the Independents had shown more interest than the major parties in engaging with allied health workforce issues, and hoped that a “good cluster of Independents” would be elected “because I think that is the only way we are going to break this huge silence on the future of allied healthcare for older people”.

Another participant expected the Independent candidates would be unlikely to support a Labor Government if elected, given the nature of their constituencies. Rather, they were more likely to bring some ‘small l’ Liberal values back to the Coalition. However, Russell disputed this assessment, asking how an Independent candidate advocating for climate action could align with a Liberal Government.

Sharon Friel, Professor of Health Equity at the Australian National University, raised concerns that the Independents were not paying sufficient attention to structural issues, that instead they were “orienting a discourse towards addressing the needs of particular topics and particular populations”. She said: “I do worry that the way that the discourse is happening and the embrace of the Independents will keep us much further downstream of the sorts of actions to address social and health problems. Please tell me I’m reading that all wrong!”

Professor Jon Wardle, from Southern Cross University, highlighted many issues facing communities in the aftermath of bushfires and floods and the disconnect between the media and the politicians, versus what is important to communities. “The pandemic is not over,” he said, raising concerns about the exacerbation of socioeconomic disadvantage in the wake of these traumas. He also described the leadership of the Indigenous community in response to the floods in Lismore.

Professor Bronwyn Fredericks, from the University of Queensland, who is guest tweeting for @WePublicHealth this week, spoke about the importance of the Uluru Statement from the Heart, and its widespread support amongst representative Aboriginal and Torres Strait Islander organisations. “We have so very much to lose, not just Aboriginal people, not just Torres Strait Islander people – all people in Australia have so much to lose if we don’t get this up,” she said.

See Croakey’s archive of stories on the election and health.

The Health Wrap: as National Cabinet sets a course for health reform, here are some key issues to address