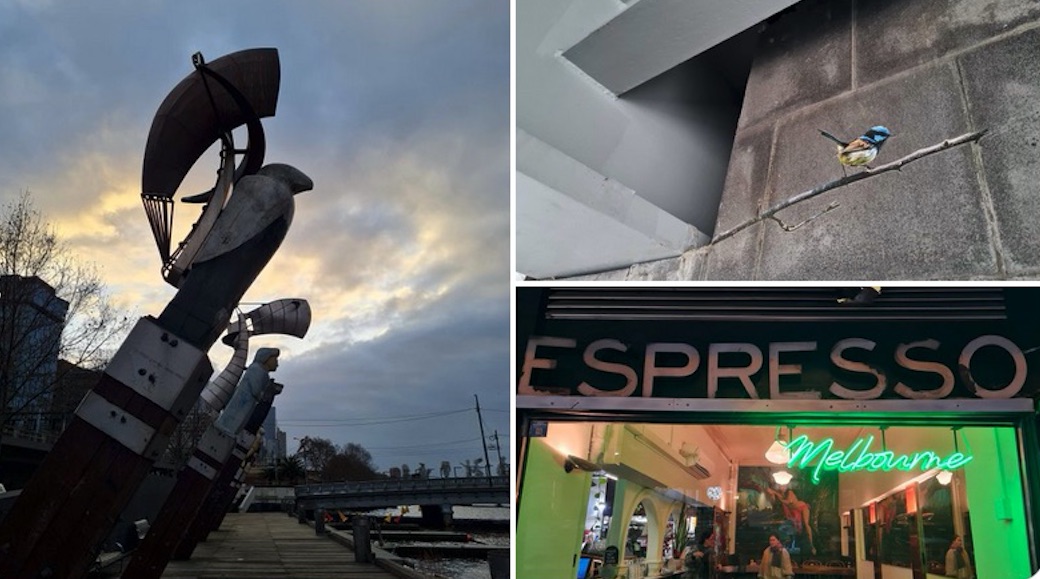 Join her journey below… 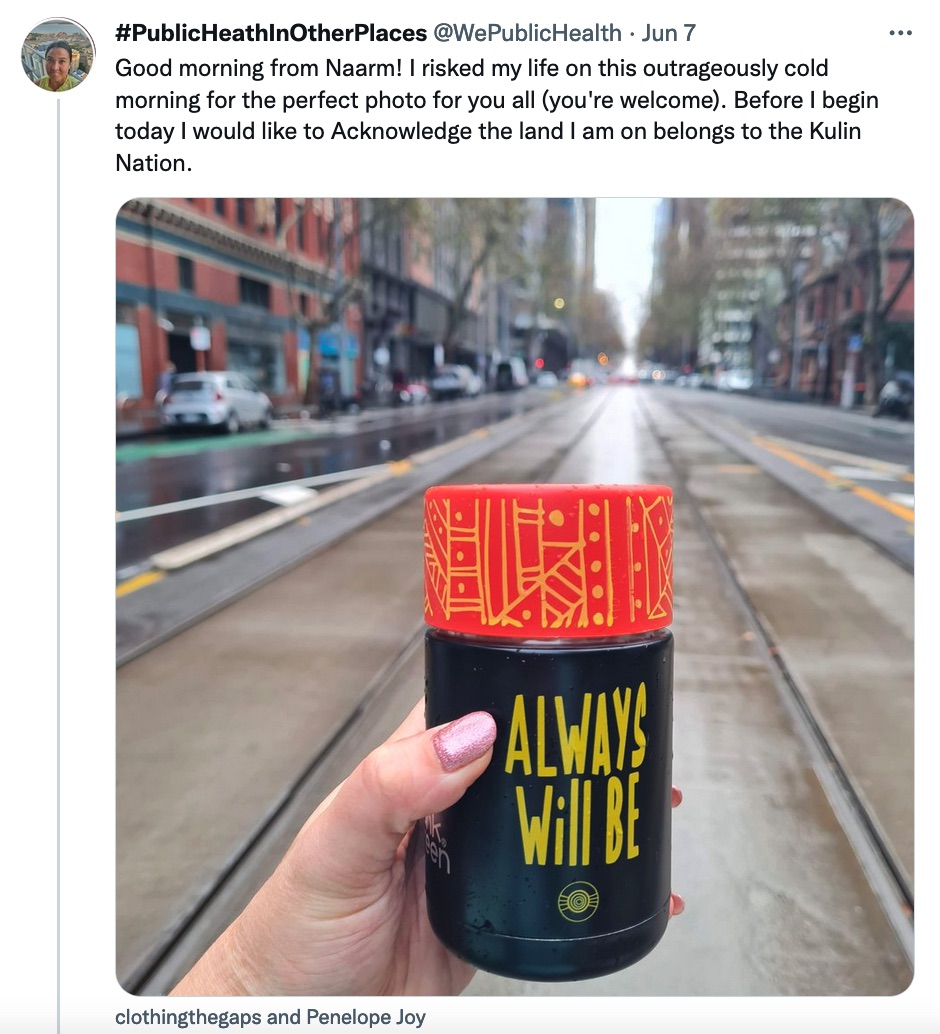 Before I begin my hosting of this excellent account for the week I would like to acknowledge that I am on Naarm, the traditional land of the Kulin Nation. This statement is more than a token starting point for me but my way of showing my respect for I am on stolen land.

So over a decade ago when I did this Masters of Public Health unit at the University of Melbourne, Professor Rob Moodie brought in different people for us to hear from.

At first, I was like, why a chef? Why a person from the music industry? But it was this unit which ignited my interest in the value of Public Health looking beyond…

So buckle in friends and join the ride… I have one single goal: that a handful of you will watch, listen, read something I share and that you will share it with the people in your life. And all of us will be just a touch more thoughtful, inclusive, open.

First, with a First Nations focus, I explore how self education gives us access to the lived experience of others and enable us to challenges our own worldview, standpoint and bias.

A play not to miss

And listen to this excellent interview by Jacinta Parsons with the actors Jimi Bani and Guy Simon about the play, The Return, co-commissioned by Rising and the Malthouse Theatre. It is important to note that the content of play focuses on repatriations. It is often confronting. Details here.

Also listen to this RRR interview: “The Return is an extraordinary new production inspired by Yorta Yorta man Jason Tamiru’s work repatriating the bodies of his ancestors to Country.” 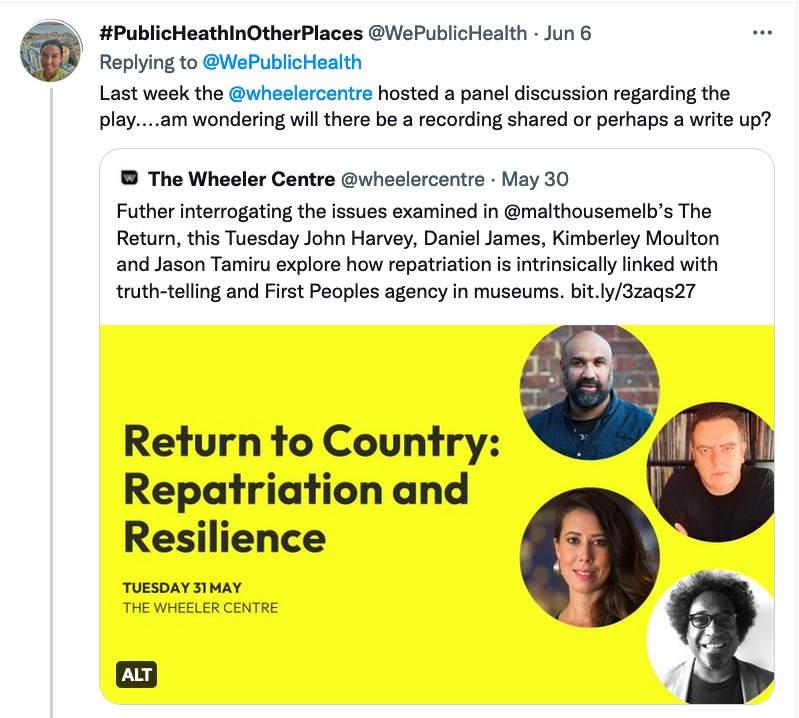 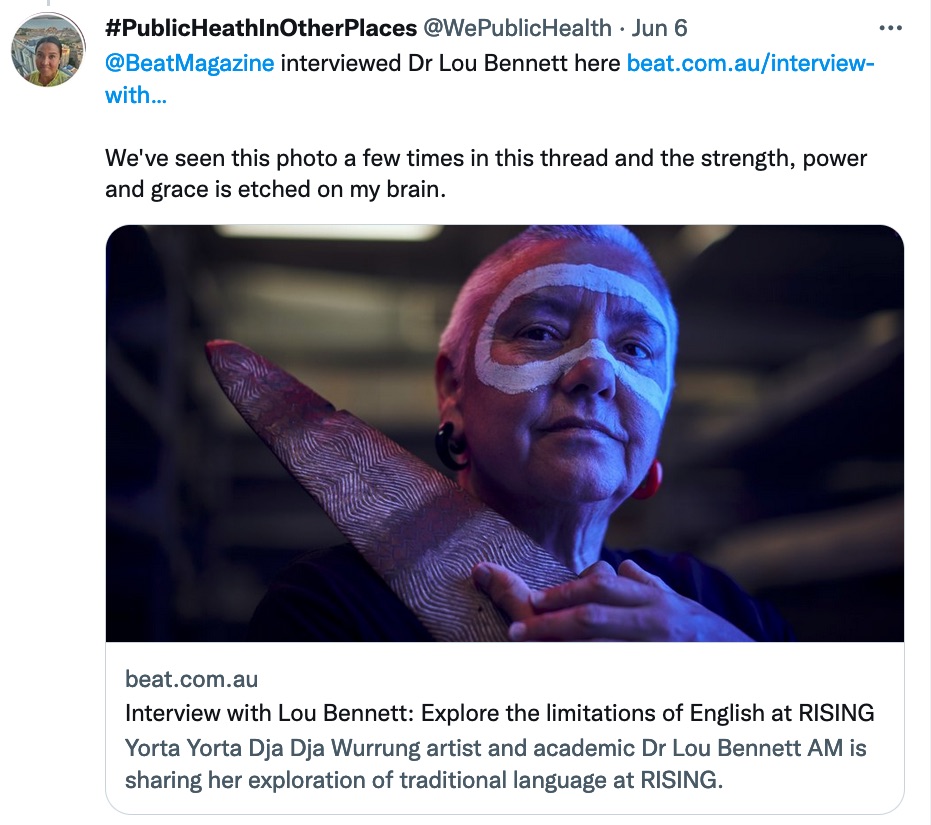 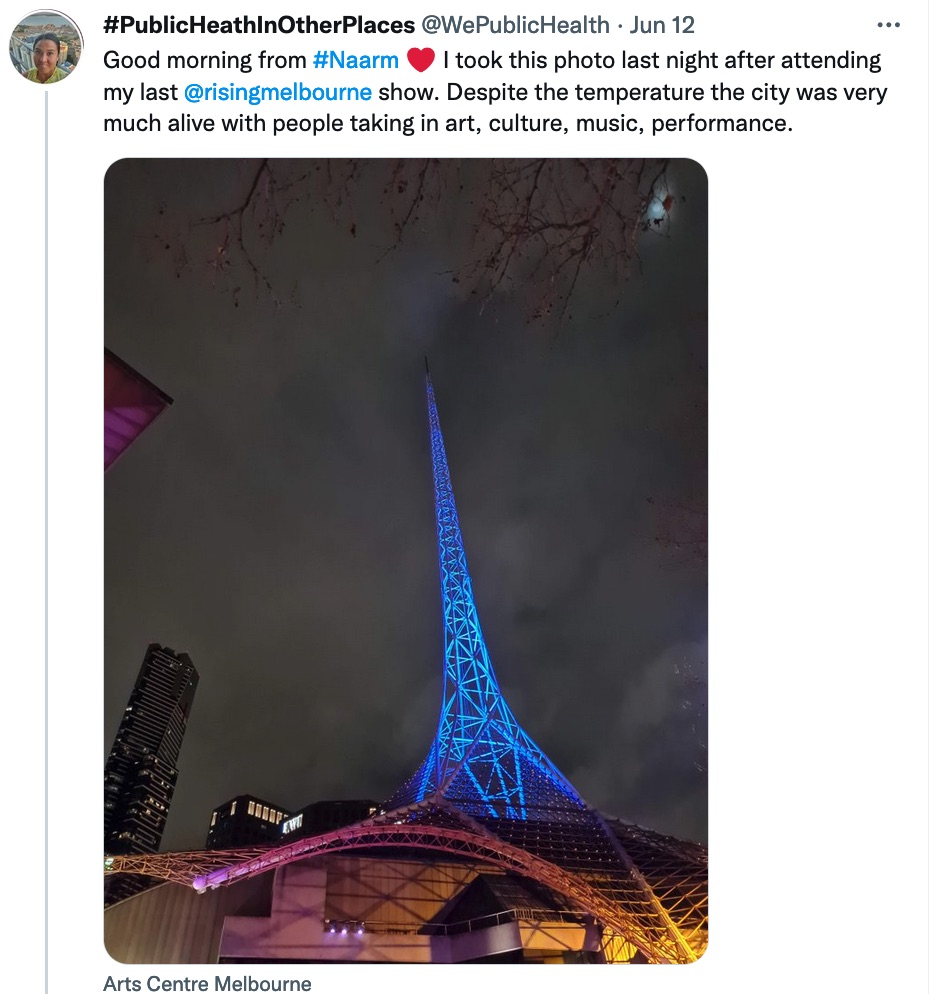 Podcasts have enabled me to explore the nuances of racism and oppressionas a non-Indigenous woman of colour and began to answer my questions regarding my own lived experience.

Film festivals can play a role in giving a platform to the silenced, and elevating the voices of the oppressed. They are the ideal place to undertake self education, listen to the lived experience, broaden our worldview and be entertained!

While I lived on Larrakia land, the @DeckchairCinema was committed to films outside of the mainstream.

By exposing myself to stories from First Nations people across Australia and across the globe I feel that a deeper understanding of the meaning of the place-based approach can be achieved. By doing this you can efficiently transform the way you work in Public Health.

Short films – now this inclusion in my decision making is all about economics, entertainment and exposure. It’s a cost efficient way to see more films, the length of film changes the dynamic of entertainment and this increases the amount of film makers and actors you are exposed to.

@MIFFofficial @sydfilmfest @humanrightsfest all include short films in their programs.

I could spend hours tweeting all the films that have had an impact on me, changed the way I work in Public Health, altered my worldview but whose got time forthat (although if you want recommendations please DM @lopeypen).

Instead I would say this: if you can afford it put these film festivals into your yearly schedule, make it a tradition. If you are stretched for time enjoy their digital versions (one of the few gifts from the pandemic which I do hope keep going).

Supporting film, particularly local film, to tell the untold story, to give time and space to those who haven’t been heard or listened to, is surely part of a public health approach?

Quick side note with #HomeToBilo trending for wonderful reasons I would argue that the @AustralianStory episode about the Murugappan family is a powerful example of the role that the film, television etc… can play in advocacy. Watch it here. 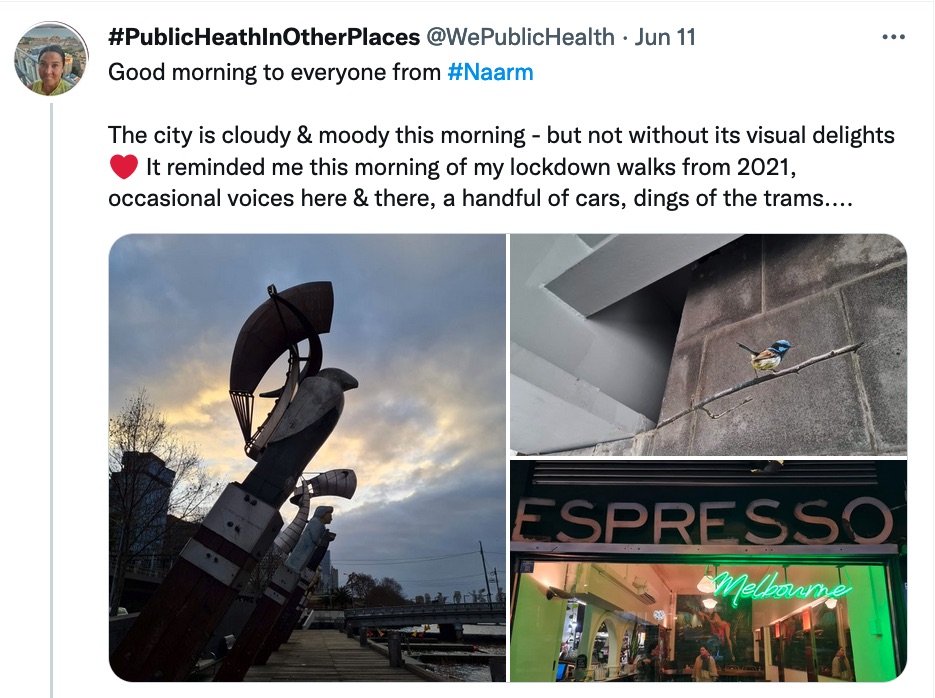 The Intercultural Framework – @MarkYettica @collabforimpact – taught me that understanding my own story was important to my Public Health professional life.

While working for @MarkYettica in #IndigenousEducation with @li_hsia, we would often have discussions about the Intercultural Framework, and how understanding as non-Indigenous people our own story supports our ability to be not only anti-racist, but also be a true accomplice.

These conversations and then my utilisation of the Intercultural Framework and @collabforimpact Deep Collaboration site in my work triggered in me a new, deeper desire to understand not only my Filipino heritage but also the impact of both my mother’s and my own adoption.

This (unfinished) process of exploration of self, guided by the Intercultural Framework, supported by the incredible array of film, theatre, music, podcasts, books and more, has transformed the manner in which I undertake both Public Health and education.

When I was talking to @MrsBriskelly about hosting @WePublicHealth and my approach, I reflected that the quiet act of exposing people to things to watch and listen to that just might change their worldview, deepen their understanding, create connection, trigger empathy is excellent.

Growing up without my Filipino family, I found that film is one way to connect to culture, to history for me.

The 2020 film @thousandcuts, which follows Maria Ressa’s work, along with her team at Rappler in Philippines during Duterte presidency, is essential viewing, not just to understand Philippines but to be aware of the value, importance of public interest journalism.

I was disappointed that the @netflix film The Great Hack only briefly touched on the role that Cambridge Analytica played in Philippines elections. The film gave the impression that UK & USA were the only countries affected but the damage done elsewhere is significant.

@MIFFofficial often includes films by #LavDiaz in the program, with the first one I saw being Storm Children: Book One.

This outstanding film gave me insight into the period after a disaster for the people left behind Typhoon Haiyan. The time when building hadn’t started, clean up wasn’t complete, people weren’t accountable, but the world wasn’t interested anymore.

The closing film for @humanrightsfest this year was the incredible film: @FannyTheMovie.

A rock film about an amazing #Queer #Filipino #Feminist band.

It might surprise you but this film is all about intersectionality.

It was quite something listening to the band talk about the experience of being Filipino, Asian, Female, Queer and the direct impact that had on their careers, opportunity, record sales 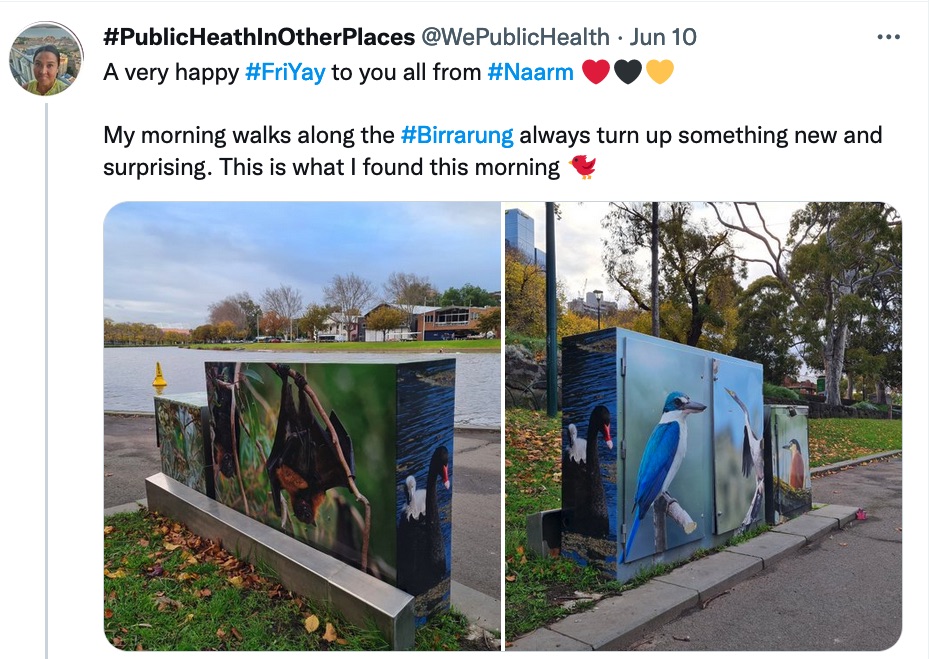 And to sing you out…