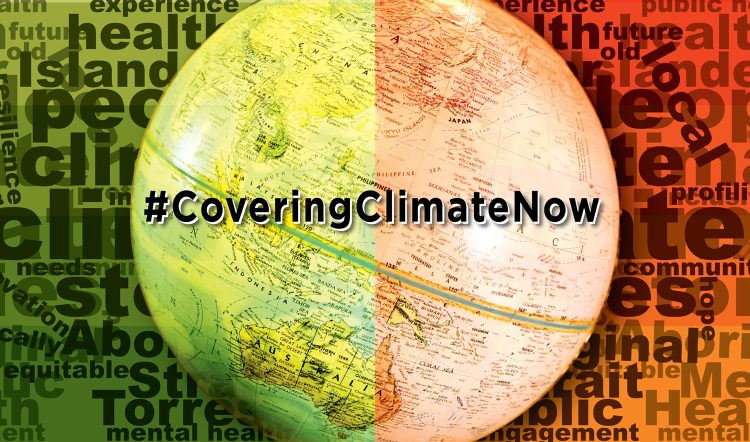 Join us in #CoveringClimateNow – an ambitious global media project

Croakey is one of a handful of Australian media organisations to join a global media initiative putting a sustained focus on the climate crisis ahead of a landmark international Climate Action Summit in New York on 23 September.

The Covering Climate Now initiative is co-founded by The Nation and the Columbia Journalism Review (CJR), in partnership with The Guardian.

It is aimed at “breaking the climate silence that has long prevailed within too much of the news media” and doing “justice to the defining story of our time”.

As one of more than 170 media outlets joining the initiative (the list of participants is below), Croakey invites our readers, contributors and social media followers to engage with these critical discussions, using the hashtag #CoveringClimateNow.

As outlined below, we are hosting a range of activities as part of our #CoveringClimateNow contributions, and we welcome your suggestions for these.

The climate crisis demands that we all transform how we work and live, and shift our priorities.

At Croakey we are committed to stepping up our coverage of climate and health but we need your help to do this.

We have launched a crowd-funding campaign via the Patreon platform so we can provide regular, in-depth coverage of the health impacts of climate change, taking a local, national and global approach.

Funds raised through this Patreon account will go to a dedicated public interest journalism fund to put a sustained focus on the health impacts of climate change.

Please help us to produce stories that will help inform the health sector, policy makers, communities, families and others about how best to respond to this public health crisis.

More than 170 news outlets from around the world have now signed up for Covering Climate Now, a project co-founded by CJR and The Nation aimed at strengthening the media’s focus on the climate crisis.

All outlets have committed to running a week’s worth of climate coverage in the lead-up to the United Nations Climate Action Summit in New York on Sept. 23. At that meeting, the world’s governments will submit plans to meet the Paris Agreement’s pledge to keep global temperature rise “well below” 2 degrees Celsius.

“The need for solid climate coverage has never been greater,” said Kyle Pope, CJR’s editor and publisher. “We’re proud that so many organizations from across the US and around the world have joined with Covering Climate Now to do our duty as journalists—to report this hugely important story.”

Covering Climate Now now ranks as one of the most ambitious efforts ever to organize the world’s media around a single coverage topic. In addition to The Guardian—the lead media partner in Covering Climate Now—CJR and The Nation are joined by major newspapers, magazines, television and radio broadcasters, and global news and photo agencies in North and South America, Europe, Africa, and Asia.

Among the outlets represented are: Bloomberg; CBS News; El País; the Asahi Shimbun; La Repubblica; The Times of India; Getty Images; Agence France-Presse; national public TV broadcasters in Italy, Sweden, and the United States; most of the biggest public radio stations in the US; scholarly journals such as Nature, Science, and the Harvard Business Review; and publications such as Vanity Fair, HuffPost, The National Observer, and The Daily Beast. Covering Climate Now also includes a wide array of local news outlets and non-profit websites reporting from Rhode Island, Nevada, Turkey, Togo, and dozens of places in between.

“Collaboration with like-minded colleagues makes both journalistic and business sense in today’s media environment, and The Nation is happy to encourage such collaboration and proud to share our climate coverage as part of this exciting initiative,” said Katrina vanden Heuvel, publisher of The Nation.

All of the news outlets participating will decide for themselves how many climate stories to run during the September week of coverage, and what those stories say.  The only requirement is that the participating outlets make a good faith effort to run as much high-quality climate coverage as they can—and thereby signal to their audiences the paramount importance of the climate story.

Some of the outlets participating in Covering Climate Now will share their climate coverage with one another, though this is by no means obligatory.  Many outlets will publish or broadcast only stories they themselves produce. This decision is entirely up to each participating outlet.

The Varsity (The University of Toronto, Canada)

The Times of India (India)

The i Paper (The United Kingdom)

Bulletin of the Atomic Scientists

The Chicago Review of Books

Journal for the Planet

The Conversation (The United Kingdom)

The World, by PRI and the BBC (The United Kingdom)

The Lancet Countdown on Climate Change and Health (The United Kingdom)