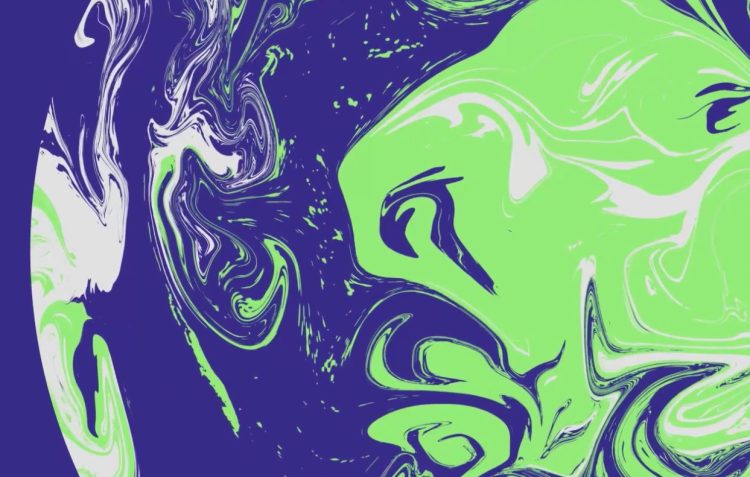 In just over five weeks’ time, Glasgow will host what has been billed as one of the most important diplomatic meetings in history, the COP 26 global climate summit.

In the lead up to COP26, scheduled from October 31 to November 12, a stack of events will take place that may be of interest to Croakey readers, including:

22 September: For Climate Night, seven late-night comedy shows in the United States have committed to broadcasting programming about the climate emergency.

23 September: Untold stories: climate activism and the brutal realities of loss and damage: an online event with activists from activists from the Solomon Islands, Rwanda and Sierra Leone. Hosted by the International Institute for Environment and Development.

24 September: An Asia Pacific webinar on climate justice will hear from First Nations people in Australia and Aotearoa/New Zealand, and Pacific Island States.

25 September: Global Citizen Live, a rolling series of live concerts with the aim of defending the planet and defeating poverty will take place in major cities, including London, Paris, Seoul, Lagos, New York, and Los Angeles.

28-30 September: A UN Youth Summit, in Milan, Italy, will offer people aged 18 to 29 a chance to develop climate proposals in advance of COP26.

October 16: Climate Live, a series of simultaneous concerts in 40-plus countries, developed by Fridays for Future activists to call for climate action.

In the US, the Biden Administration has announced an inter-agency plan to address the risks of extreme heat. It involves the Departments of Labor, Health and Human Services, Homeland Security, and Agriculture; the Environmental Protection Agency (EPA); and the National Oceanic and Atmospheric Administration.

The White House announcement notes that during the heatwave in the Pacific Northwest in June, hundreds of excess deaths and thousands of emergency room visits were reported for heat-related illness.

It also cites a recent EPA report, ‘Climate Change and Social Vulnerability in the United States: A Focus on Six Impacts’, as outlined below. 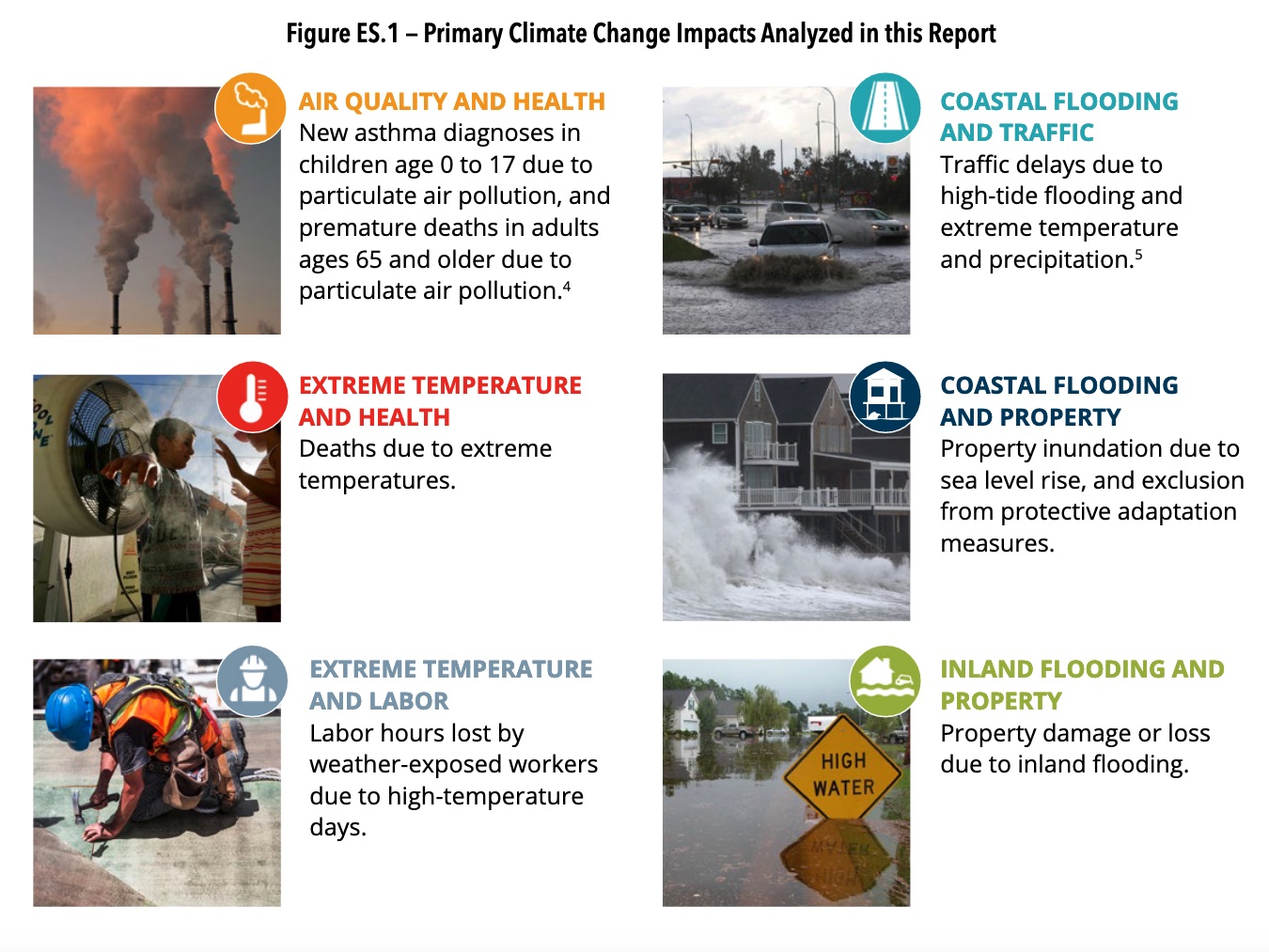 Engage with media and public spheres

In advice to journalists covering COP26, the global media collaboration Covering Climate Now suggests that the three key issues to focus on are: 1.5 C is the most important number; climate justice is both imperative and self-interested; and solutions abound, but so do political barriers.

The advice for journalists may also be of interest to health stakeholders – read more here.

The collaboration has previously produced tips for journalists covering the climate crisis, and these may also be helpful for Croakey readers wanting to engage with media and wider public spheres around climate action for health.

The tips include the importance of focusing on environmental justice, avoiding “doom and gloom”, ditching the jargon, avoiding political dogfights, and “for God’s sake, do not platform climate denialists”.

Let’s just repeat that for those media reps at the back:

For God’s sake, do not platform climate denialists.”

Meanwhile, in the lead up to COP26, let’s also acknowledge those in the health sector who’ve been working hard for many years for climate action, and also in recent days at the AGL annual general meeting. 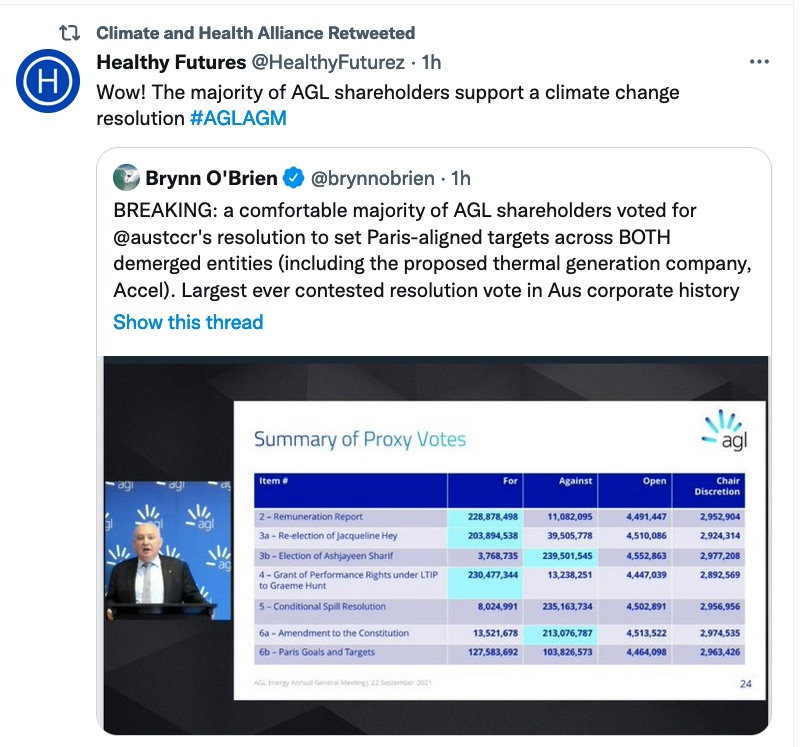 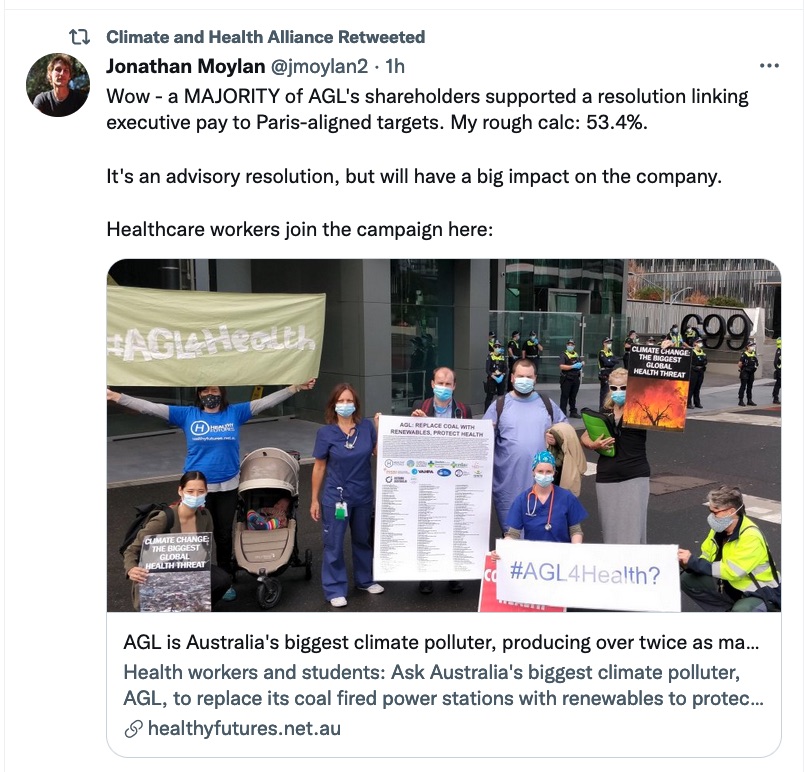 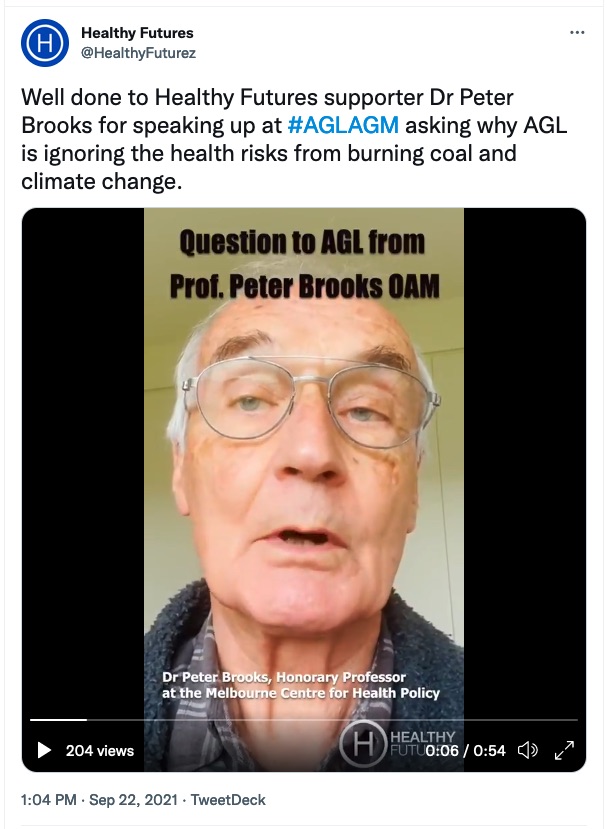 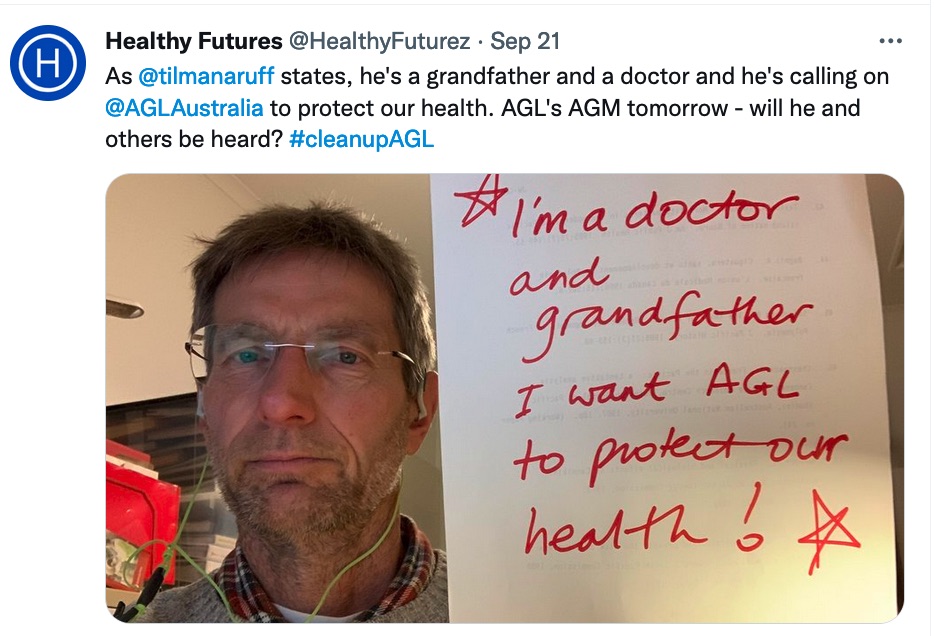 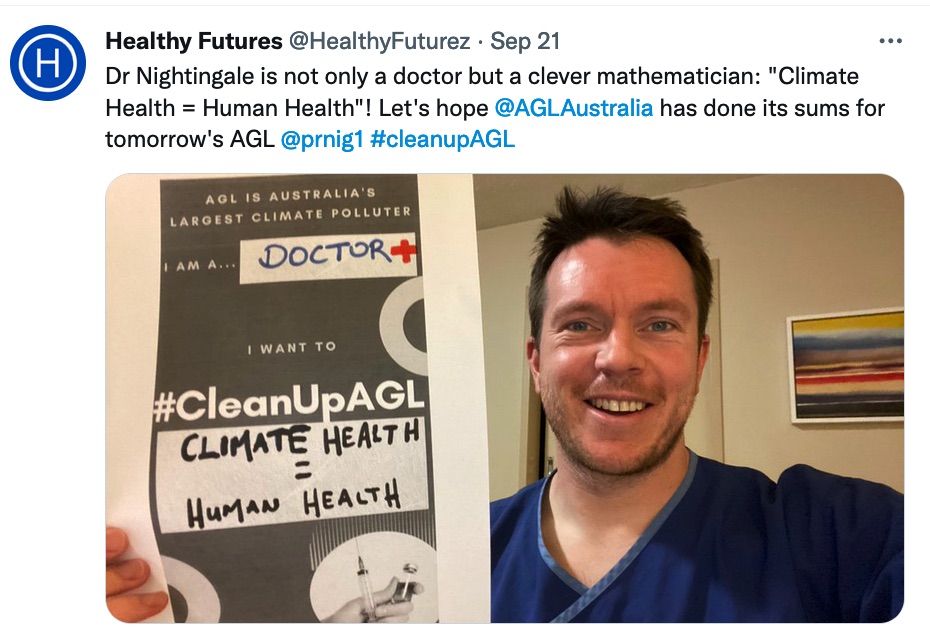 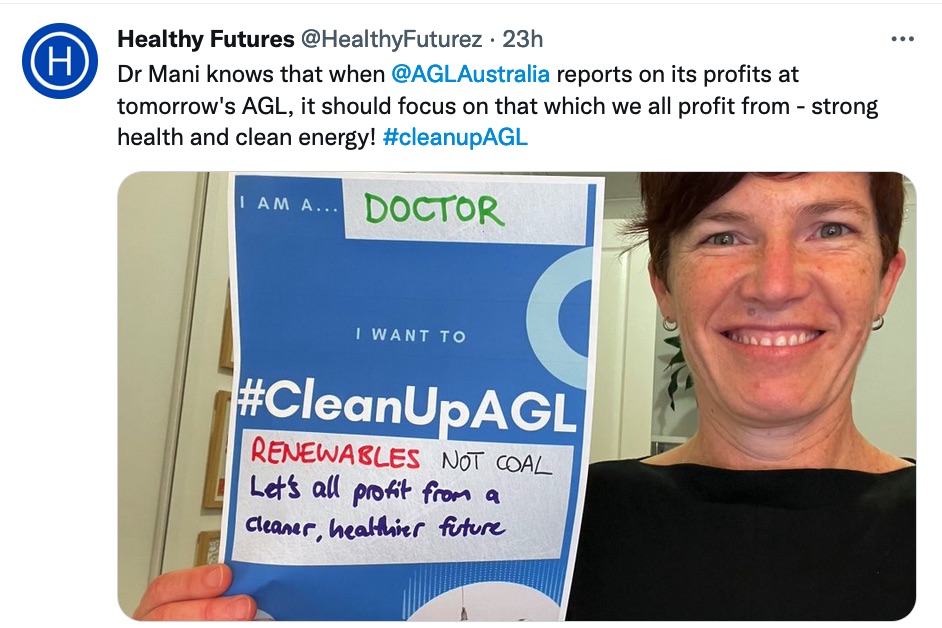 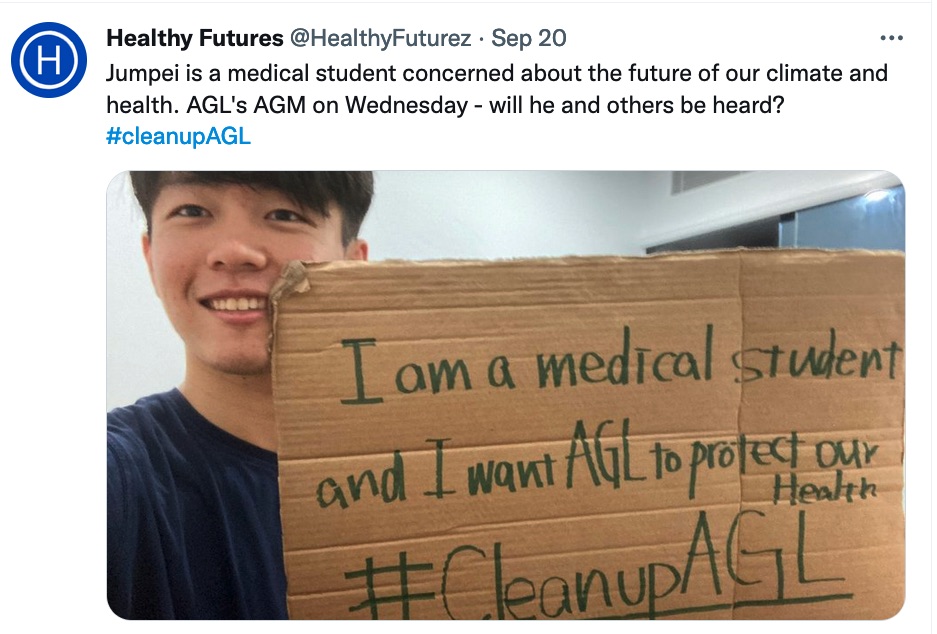 PrevPreviousDespite audit findings, many questions remain about the Medical Research Future Fund
NextOut of the shadows and into the spotlight: the role of expert advice in public health emergencies  Next