Late last year, Croakey published an article in which some of our contributors nominated the highs and lows of 2015 for public health, amongst other things.

I was then rather chuffed to see this post inspire a survey of Scottish public health professionals, organised by Dr Graham Mackenzie, a Consultant in Public Health Medicine, NHS Lothian, Edinburgh.

(See the bottom of this post for a summary of the survey’s findings).

As a result of that online connection, I am delighted that Graham will be the first guest tweeter for @WePublicHealth this year.

Please follow him at @WePublicHealth this week, and join the conversation by tweeting a selfie showing your Public Health priority for 2016, using #PublicHealthTag.

Below is some more from Graham, about his plans for the week. 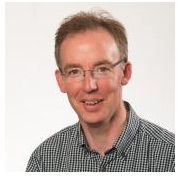 I am a Consultant in Public Health Medicine, NHS Lothian, Edinburgh, Scotland. I graduated 1995, working initially in general medicine and cardiology.

In 2001 I started in Public Health training, taking up my current post in 2008 with a remit for women and children. I have had a wide range of research interests including cardiovascular disease and statins, hip fracture and thromboembolism (the subject of my MD thesis) and more recently food vouchers in child poverty (paper submitted for peer review Dec 2015).

I am married, with 3 children. Interests outside work include music (plays saxophone and clarinet in a band), cycling, reading and travel (though he’s never been to Australia).

I tweet using @gmacscotland, and have recently been experimenting with setting up a social media network for Public Health in Scotland (http://www.scotpublichealth.com  )

A second #scotpublichealth #publichealthhour will be 3 Feb 2016, 11AM-noon UK time.

While guest editing @wepublichealth, I plan to look at four themes: “something old, something new, someone followed, and a hint of #ScotPublicHealth”.

Tweets on these four themes will be labelled with:

#PublicHealthArchive (something old – see https://storify.com/gmacscotland/a-public-health-century-aphcentury-full-version … … – expanding this to look at public health progress across the world from the past 2 centuries)

#PublicHealthNews (looking at Public Health stories from around the world)

#PublicHealthTag (like the playground game, in an attempt to network with public health colleagues across the world)

#ScotPublicHealth (stories from public health in Scotland, or shared by the Scottish Public Health community – http://scotpublichealth.com/  )

Please join us during the week by tweeting a selfie showing your Public Health priority for 2016. Use #PublicHealthTag in your tweet.

So let’s try to meet some new people with common interests around the world.

Mention a colleague, inviting them to take part. Include a link to this blog.

I’ll collect the tweets by public health theme in a Storify.

If the idea works, we can treat this as a Public Health directory for 2016. Tweet, take part, think broadly about people you’d like to involve and invite them to take part.

Search Twitter for #PublicHealthTag to see who else is engaged.

Ebola, Public Heath and NHS cuts in England and austerity more generally featured prominently during 2015. Respondents reported progress and opportunities in integration and collaborative working, but also potential threats to public health both in terms of reducing resources, and the apparent shift away from prevention and upstream measures, often in direct contradiction to government’s stated priorities. The pace of health and social care integration has also caused frustration.

The debate about e-cigarettes continues, with responses reflecting a range of views, a discussion that will continue into 2016. There was, however, good progress on reducing health related harm of tobacco through legislation and some progress on pricing measures for alcohol.

There is greater awareness of mental health issues and increasing focus on health inequalities, not least because of Michael Marmot’s work this year (he was mentioned twice by different respondents). There were several mentions of potential progress on physical activity by respondents, including the Scottish Academy report and Chief Medical Officer infographic; there was one note of concern about changes to the Quality and Outcomes Framework.

• Read rest of the post here, for some interesting suggestions for good books, as well as reflections on using social media for public health. 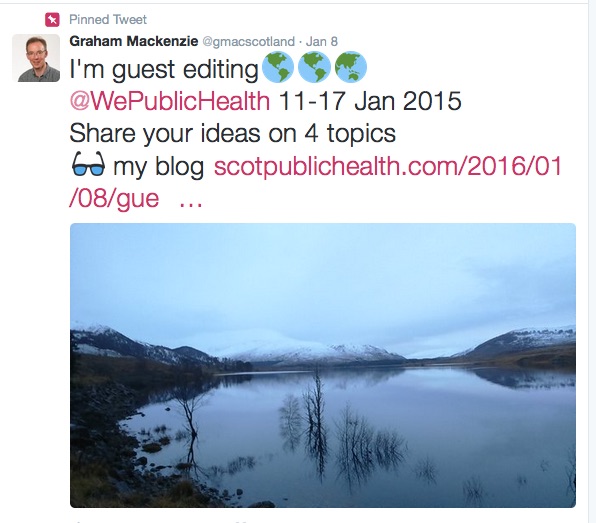 • And here is the @WePublicHealth archive for 2015.