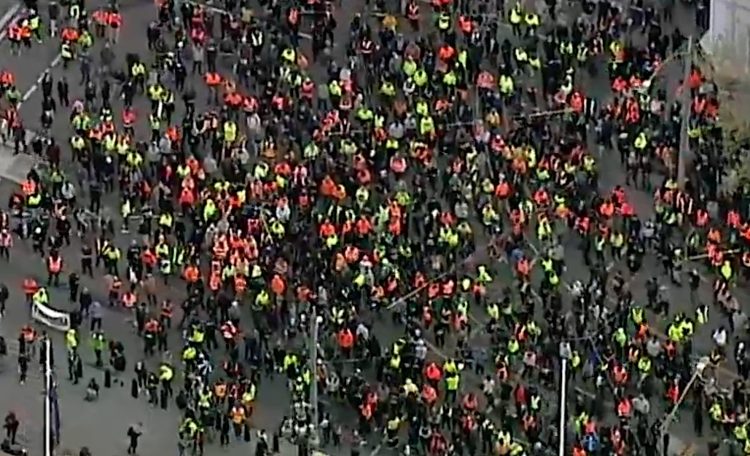 Violent protests in Melbourne during September, 2021. Image via ABC TV

Introduction by Croakey: Far-right and corporate interests are converging to undermine public health responses to the pandemic through the unchecked spread of disinformation and misinformation, reports Linda Doherty.

Her article highlights an urgent need – at local, national and global levels – to develop systematic, whole-of-society strategies for addressing the toxic spread of disinformation and misinformation.

Violent protests in Melbourne this week, led by far-right extremists against the mandatory vaccination of construction workers, produced a slew of demands, ranging from the resignation of Victorian Premier Daniel Andrews to the “mass distribution of ivermectin, vitamins C, D and zinc”.

It was clear from the list of demands that these ugly mob skirmishes were not just about jabs for tradies. The demands called for the abolition of pandemic control measures, echoing the so-called “freedom” marchers, Qanon activists and anti-vaxxers, opposing lockdowns, masks, vaccine passports and mandatory vaccinations.

“Australians are facing an organised campaign by anti-vax and far-right activists to undermine confidence in life-saving medicines and a public health response which continues to save lives every day,” Sally McManus, Australian Council of Trade Unions Secretary, wrote in The Age yesterday.

Fed up Victorian nurses, who have been on the COVID-19 frontline for 18 months, called on the protestors “to stop thinking only of themselves, stop the violence and put the health and welfare of the Victorian community first”.

“Nurses, midwives and carers are exhausted and frustrated as they watch protesters fight for their right to overwhelm our health system,” Lisa Fitzpatrick, Victorian Branch Secretary of the Australian Nursing and Midwifery Federation, said in a statement

“We condemn those who created fake protest posters using our name, incorrectly, to create fraudulent legitimacy.”

These tactics of false and twisted messages are just the latest in the infodemic of misinformation, disinformation and conspiracy theories about the coronavirus.

And it seems there’s an information tug-of-war in play, as governments and health authorities increasingly struggle to cut through with public health messages and are forced to shout louder than the trolls on social media, vested interests, right-wing media, anti-vaxxers, the far right, and the politicians and celebrities who stoke the fire.

Martin McKee, Professor of European Public Health at the London School of Hygiene & Tropical Medicine, told Croakey that “disinformation as a threat to health” was explicitly identified in the recent pandemic report he produced for the Pan European Commission on Health and Sustainable Development.

Yet so far a cohesive and consistent public health response – by governments and health organisations – was “conspicuous in its absence in many countries”.

“It does point to a failure to develop a truly comprehensive pandemic strategy,” he said.

“It is also concerning when some [UK] government advisers have become involved with these [disinformation] groups, have retweeted their messages, or have allowed their comments to be exploited by these groups without challenging them.”

McKee said there was often a reluctance to confront conspiracy theorists as any response could be seen as confirming their views.

“However, there is extensive expertise in how to manage cognitive biases that can be incorporated into public health messaging,” he said. “Indeed, we need to see communication in the face of bias as a core public health skill.”

More could be done to expose the networks promoting disinformation and reveal their “often opaque funding”, close connections and overlapping membership, he said. “There is a great deal we can learn from research methods developed to study the commercial determinants of health,” he said.

McKee is chair of the Scientific Advisory Board of the Pan-European Commission on Health and Sustainable Development and its review of COVID-related evidence, released last week, makes wide-ranging recommendations about how countries can better respond to COVID and prepare for future pandemics.

Australia only has to look at the United States to see what happens when governments and health authorities lose the trust of voters on their handling of pandemic public health measures.

President Joe Biden last week announced sweeping COVID-19 vaccination mandates and other restrictions after Republican legislators in more than half of the American states – spurred on by community anger at pandemic restrictions and mandates – removed the powers of state and local officials to protect the public against infectious diseases.

“My plan also takes on elected officials in states that are undermining you and these lifesaving actions,” Biden said.

An investigation by Kaiser Health News found the legislative actions of the states included limiting or removing the authority of public health officials to order mask mandates, quarantine and isolation; laws banning COVID-19 vaccine mandates or passports; and, in some states, giving local elected politicians the authority to prevent the spread of infectious diseases.

“We really could see more people sick, hurt, hospitalised or even die, depending on the extremity of the legislation and curtailing of the authority,” Lori Tremmel Freeman, head of the National Association of County and City Health Officials, told KHN. 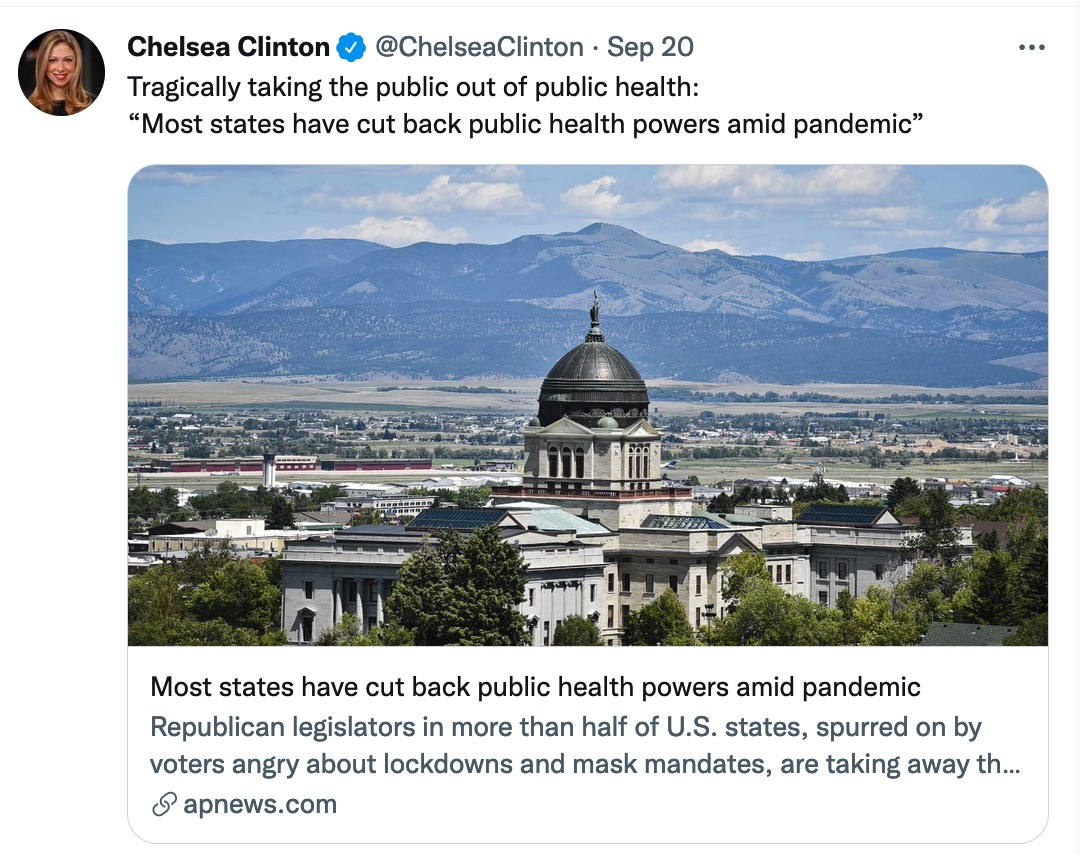 In Australia, Sally McManus from the ACTU made a similar point, despairing at “the void left by the lack of a coherent public health advertising campaign” from the Federal Government.

“We need our leaders – all of them – to stand up because it is people’s lives at stake. It is the unvaccinated who are dying in the United States and the unvaccinated who ignore health advice on masks like they are right now in Melbourne who spread the virus which can kill others,” she said.

“We need the Morrison Government to denounce misinformation and fear-mongering – online, in the media, in Parliament, even in its own ranks.”

Standing up against threats

At the same time as the Melbourne protesters were hurling projectiles at police, the Public Health Association of Australia issued a joint statement with 30 health and medical organisations and more than 60 scientists and academics to voice serious concern at “threats, intimidation and harassment aimed at TGA [Therapeutic Goods Administration] leadership and staff”.

Some of the threats were later confirmed by PHAA CEO Terry Slevin as “death threats”.

Slevin told Croakey there was “a disturbing trend” where health officials – not just at the TGA – were being harassed and abused by the public for their role in the pandemic response.

The public statement said an essential role of the TGA was to “challenge, and where necessary, prosecute those who seek to mislead the Australian public” about important health information to pursue their own interests.

But Kelly, a serial peddler of pandemic misinformation – and his billionaire backer, Clive Palmer – have repeatedly snubbed their noses at demands by the TGA and other regulators to stop spreading misinformation, paying for advertising opposing the vaccination rollout program in major media and bombarding Australians with unsolicited text messages.

Liberal National Party MP George Christensen has also targeted the TGA, using the encrypted message service, Telegram, for a campaign of mass phone calls to the TGA to protest its restrictions on prescribing the ant-parasitic drug Ivermectin.

The Melbourne protests led the Victorian Government to shut down construction in lockdown parts of the states for two weeks to contain a rise in COVID-19 transmissions. On the same day the NSW Government reversed its vaccine restrictions on construction sites, leading to speculation it was capitulating to the powerful property and construction industry.

Australian Constructors Association chief executive John Davies told the ABC his organisation supported vaccination but it was ironic that “the day we’ve been shut down in Victoria, is the day the NSW Government announces the end of all caps and restrictions”.

“But what that also shows is that when industry comes together and collaborates with [NSW] government, when the government has a real proper level of engagement with industry, that we can sort these problems out,” he said.

Epidemiologist and World Health Organization adviser Professor Marylouise McLaws said the NSW about-turn to allow vaccinated and unvaccinated people to work alongside each other was “a bit dangerous“.

“It’s not safe enough, not with the Delta [variant] and not with young people,” she told the ABC. “For young people aged 16 to 39, only 33 percent have been totally vaccinated, and only 39 per cent have had one dose.”

Show me the money

The strategies of the anti-pandemic control brigade are very similar to those used by anti-health industries as outlined in the seminal book, Merchants of Doubt, from climate denialism to efforts to undermine tobacco control.

In a recent BMJ article, Covid-19 and the new merchants of doubt, global health and medical professors David Gorski and Gavin Yamey document the billionaires behind the Great Barrington Declaration, which promotes herd immunity – and the influence the declaration has had on the UK Government of Boris Johnson and the Trump Administration in the US.

The article reports on the April 2021 revelation by openDemocracy that Professor Sunetra Gupta, one of the epidemiologists who wrote the Great Barrington Declaration (GBD), was bankrolled by a Tory donor, the Georg and Emily von Opel Foundation.

The declaration was also sponsored by the American Institute for Economic Research (AIER), a climate denialist free market think tank that receives “a large bulk of its funding from its own investment activities, not least in fossil fuels, energy utilities, tobacco, technology and consumer goods”. The AIER, in turn, receives funding from right-wing American billionaire Charles Koch, one of the world’s largest funders of climate science denial.

“The GBD, AIER and their corporate funders are using strategies straight out of the climate denial playbook,” Gorski and Yamey wrote, describing how the Merchants of Doubt revealed how the fossil fuel industry had long used conservative think tanks to sow doubt about climate science while funding contrarian scientists, a tactic first pioneered by tobacco companies. 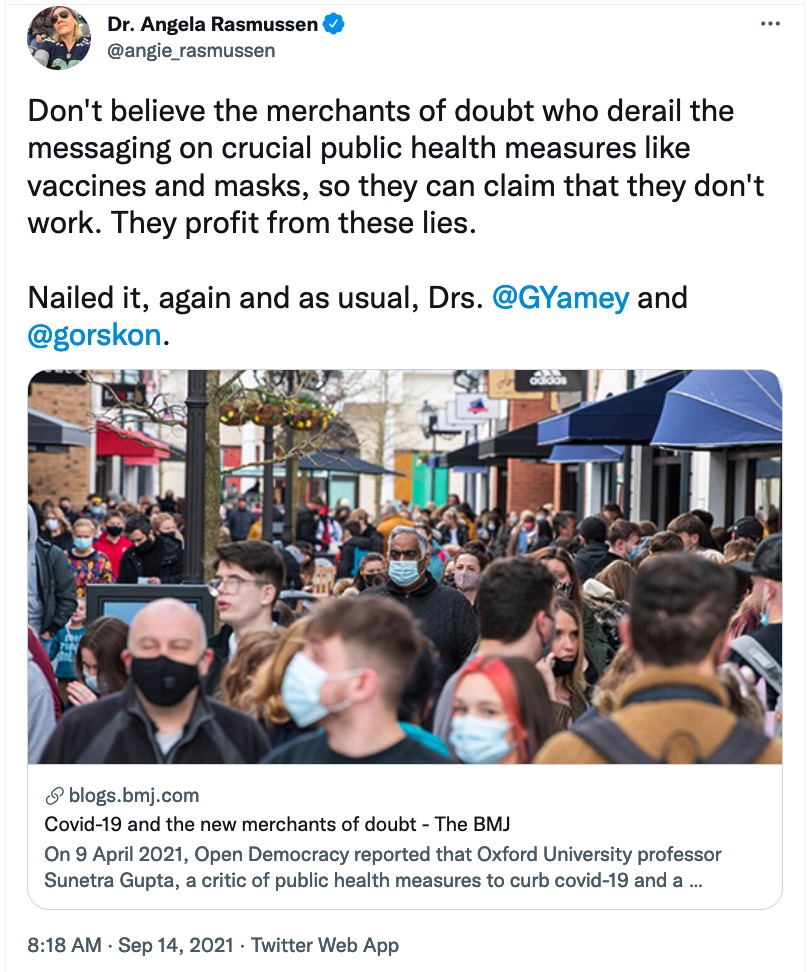 “Continued restrictions and border closures despite relatively low Covid-19 cases has continued to fuel the perception that restrictions are primarily a tool for authoritarian control, rather than for prevention of the spread of Covid-19,” the police submission said.

In the US, The Wall Street Journal revealed this month how Facebook users who oppose vaccines or doubt the threat of COVID-19 flooded comments under factual posts with misinformation and destructive health information, undermining the pro-vaccination goal set by media magnate Mark Zuckerberg.

“We have seen examples of influencers promoting extremely damaging conspiracy theories  and undermining public health orders, and providing financial advice which they are not  licensed for,” said the report by The Australia Institute’s Centre for Responsible Technology.

During the pandemic anti-vaccination sentiment was running rampant on social media by “misinformation superspreaders” with millions of followers.

“These influencers come in all shapes and sizes, using disparate topics and angles to spread confusion about the pandemic and facilitate distrust on official information,” the report said.

“‘TikTok guy’ Jon-Bernard Fairouz, who rose to his 5 seconds of fame by accurately ‘predicting’ the NSW Health daily case numbers for a time was revealed to be an anti-lockdown advocate who attended an illegal rally and encouraged anti-health behaviours.”

The chaotic and unregulated world of social media has sparked calls for new platforms to share accurate information and prevent misinformation.

“The problem is that the whole idea of unregulated platforms, powered by engagement and anger is designed to encourage excessive online behaviours – engagement gets rewarded from the algorithm,” said Peter Lewis, Director of Essential Media, and a Director of Croakey Health Media.

“There needs to be some thought about alternate platforms, designed for civic purposes not commercial ends. The incentives to misinformation would be mitigated if the profit motive wasn’t driving the way information flows.” 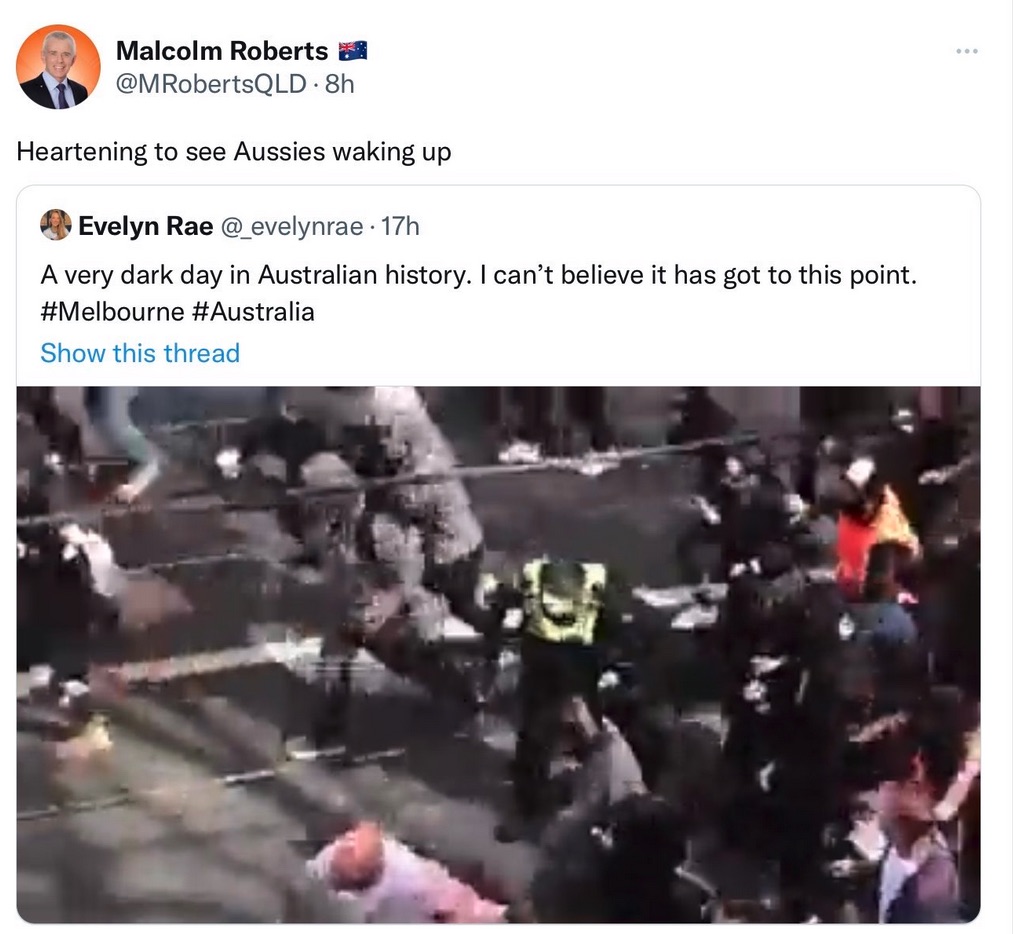 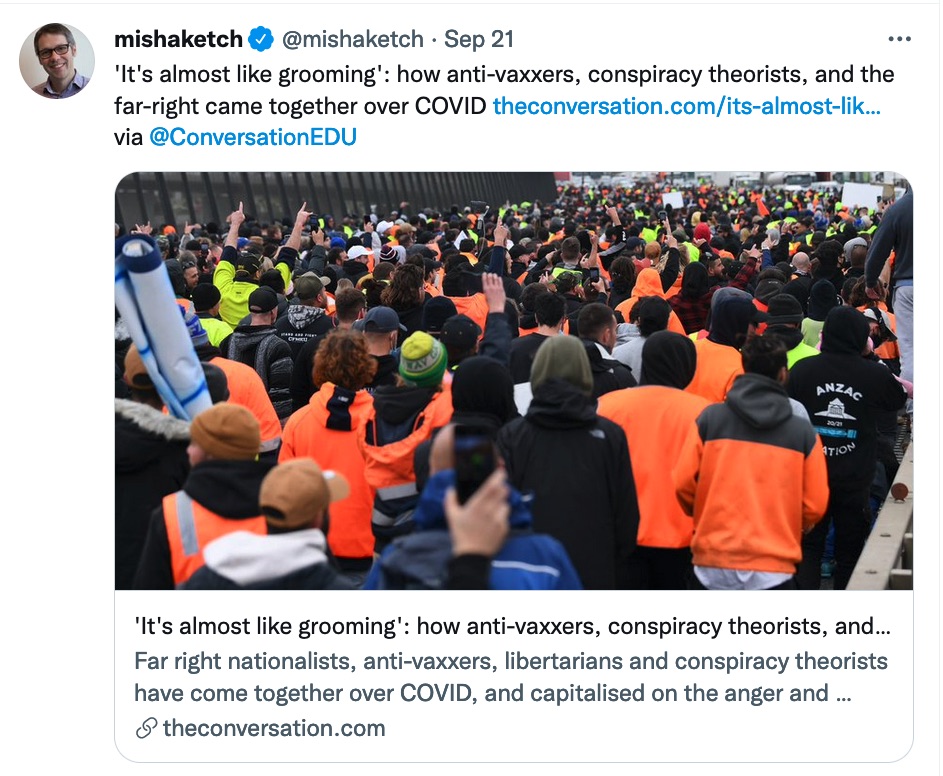 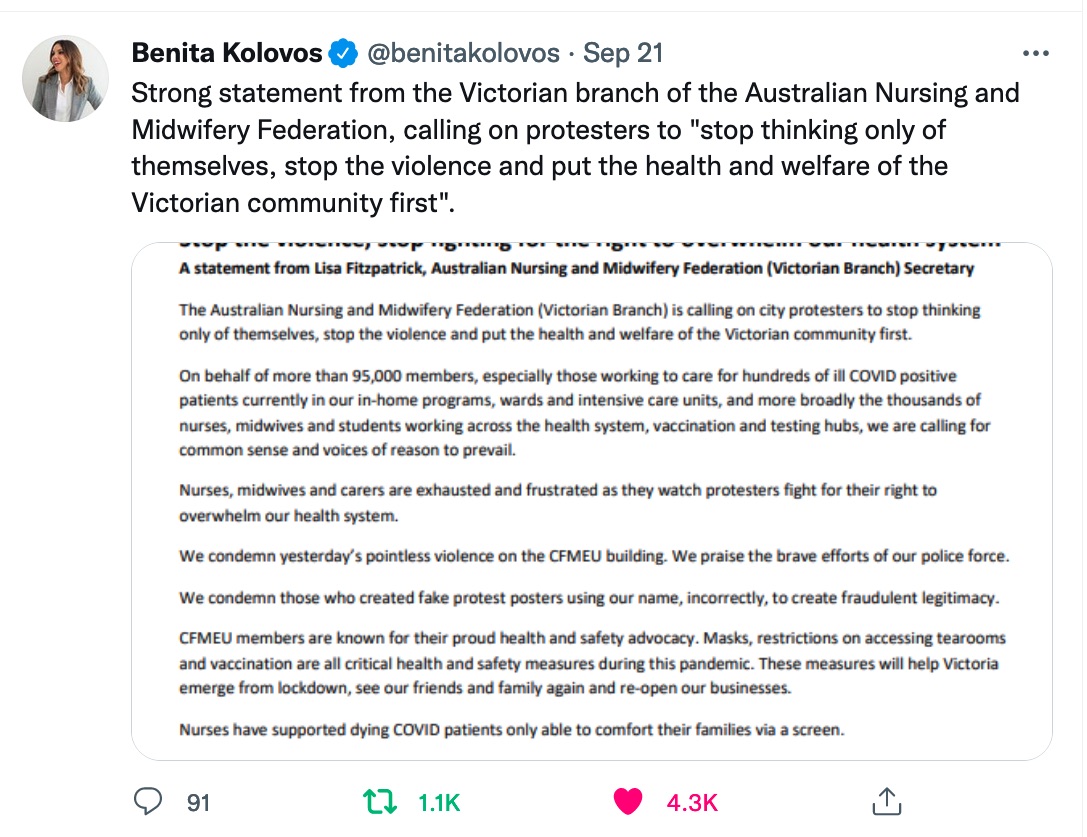 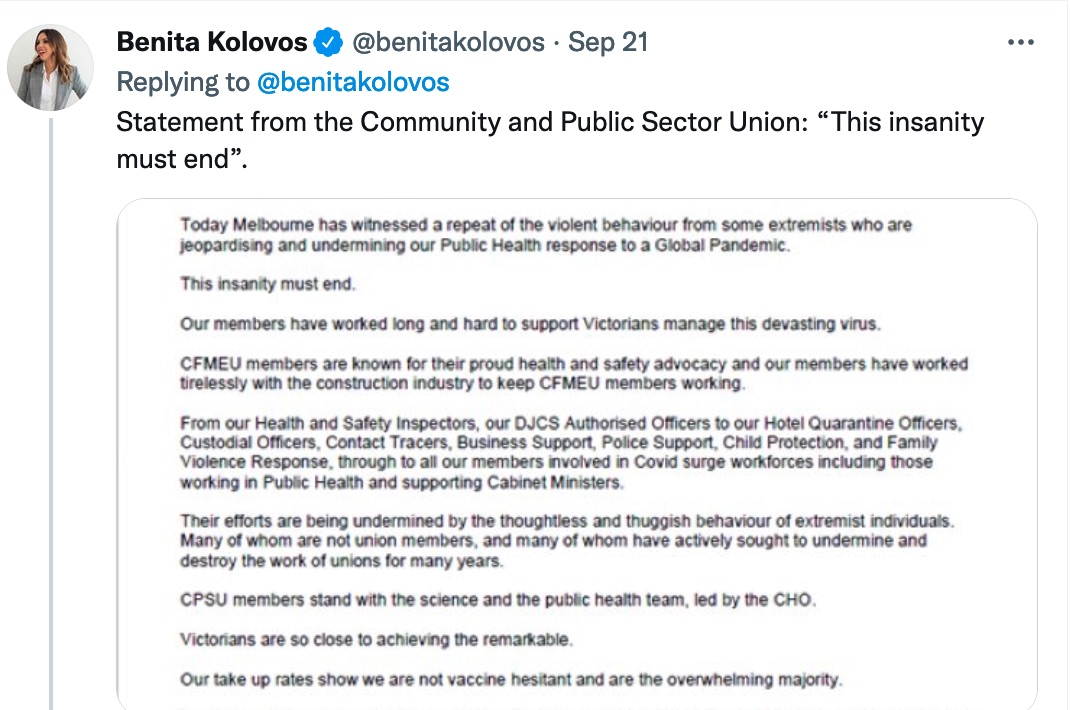 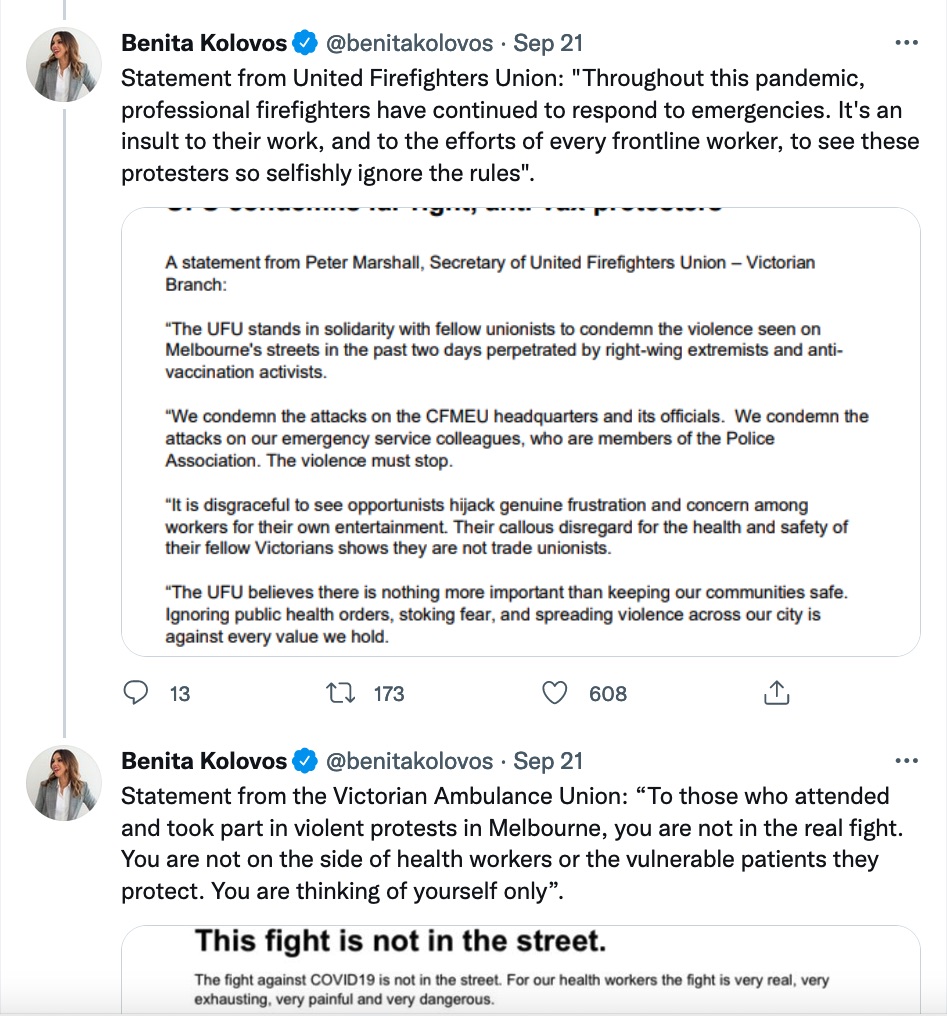 See our extensive archive of stories on public health.

PrevPreviousOut of the shadows and into the spotlight: the role of expert advice in public health emergencies
NextHow Cuban medical training has helped Pacific nations face the pandemic challengeNext