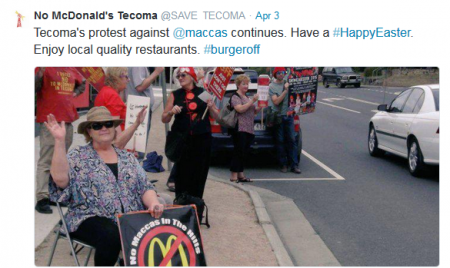 If it’s easier to influence land-use policies on the grounds of aesthetics or reducing litter and traffic than on whether fast food restaurants should be located close to hospitals or schools, do public health advocates have to rethink their tactics? That’s the question arising out of this latest instalment of Journal Watch from Dr Melissa Stoneham and the Public Health Advocacy Institute of Western Australia.

Most Australians would have seen and heard about the fight in the rural community of Tecoma, in the Victorian Dandenong Ranges to keep McDonalds out. The residents have been fighting against the fast food restaurant since the initial application was lodged in 2011. The imagery from this ongoing battle has been beamed across our televisions, in the print media and on social media forums. Even the well-known chef Jamie Oliver sent the Tecoma community a message stating:

“We congratulate the community of Tecoma on being standout advocates for ongoing health and wellbeing and we send our best wishes to you in your efforts to maintain such a special and beautiful area”.

Yet even after protests, camping out on roofs, flash mobs, enormous social media petitions and 1100 written objections to the Council about the proposed development, the McDonalds store opened its door in Tecoma in April this year.

So how does this happen? Is it about local jobs? Is it about multinationals power and profit margins or is it simply that the local government planning laws are so inadequate that they cannot stop developments such as this? In South Australia, the Charles Sturt community faced a similar issue with a McDonalds proposed close to a primary school. Charles Sturt Mayor Kirsten Alexander was against the development but said Development Act changes in 2006 meant councillors were denied a voice when planning matters went before the independent Development Assessment Panel (DAP). She made the following statement:

“As elected members, we have absolutely no power to influence a decision of the DAP, whereas until five or six years ago council could call in a decision of the DAP if they didn’t agree with that.  As councillors we no longer have the power to do that. Therefore council is forced into … defending a decision using ratepayers’ money when a resident appeals it, so whether we like it or not we are defending that decision, so it’s a very difficult position.”

With Australia’s obesity rates rising steadily, PHAIWA along with many public health advocates have suggested zoning and other land-use policies as a promising approach to foster healthy food environments,including land-use policies to restrict fast-food restaurants. We have advocated for planning policies that allow total bans on the construction of new fast-food outlets and/or partial bans that prohibit construction of new restaurants in specific areas such as exclusion zones around schools and hospitals.

A study led by Laura Nixon from the Berkeley Media Studies Group- Public Health Institute and published in the American Journal of Public Health, addressed this very issue. This group of professionals are clearly worried by this inability to act, so they identified land-use ordinances to restrict fast-food restaurants proposed around the United States between 2001 and 2013. The team analysed news coverage and legislative documents to assess the public debates around these documents. The analysis included news coverage, legislative histories and demographic data in an effort to understand what types of policies have been proposed, which communities have proposed them and why.

PHAIWA has conducted a number of media analysis on issues as we are aware how much influence the media can have on framing issues and public perception. We understand that journalists’ decisions about which of the many pressing issues of the day to cover can raise the profile of a social issue, whereas issues outside the media spotlight can be left out of the public conversation and policymakers’ consideration.

In this study, the research team found that 77 American communities had proposed 100 separate fast-food-related land-use policies during the study period. The news sample included 320 articles and blogs containing 1,526 arguments. The researchers also identified 246 relevant legislative documents, including 106 ordinances, 66 meeting minutes, 37 advocacy materials and 18 meeting agendas. These policies proposed 57 permanent bans, 16 temporary bans, and 23 other types of restrictions, such as conditional use and special permit requirements, quotas and density or distance requirements.

The research team identified the impetus for these policies to be drafted and found that according to news coverage and legislative documents, land-use policies were most commonly proposed to protect community aesthetics (80 per cent). Supporters also frequently described policies in terms of their potential to protect the local economy (61 per cent) or improve quality of life in the community by reducing nuisances like litter and traffic (53 per cent). Almost a third of policies were characterised as improving the walkability of the community (31 per cent).

Improving community nutrition was rarely cited as a rationale for proposing land-use policies (20 per cent). When the nutrition impact of a policy was referenced, policy supporters argued that zoning and other land-use restrictions could prevent obesity, diabetes and other diet-related diseases.

Inspired by the lack of nutrition as a policy rationale, the research team identified the differences in the policies when nutrition was a focus. They found that more than half (52 per cent) of the policies proposed in ‘communities of colour’ were intended to improve community health and nutrition, compared to a fraction (6 per cent) of the policies debated in predominately ‘white communities’. Communities where nutrition-focused land-use policies were proposed also tended to be larger and more urban: 90 per cent of the nutrition-focused policies were proposed in communities with populations exceeding 50,000, compared to 29 per cent of policies that had other rationales.

By far the most common argument (53 per cent) for regulations that did not explicitly aim to improve health was that they would protect community appearance or charm. Local officials, community members, local business owners, and opinion writers all relied heavily on this argument. Stakeholders also argued that land-use regulations would protect the local economy and local businesses (28 per cent of all favorable arguments).

The most common argument that critics leveled against land-use policies intended to improve nutrition was that they represented an inappropriate government intrusion into individuals’ personal choices. When nutrition-focused land-use policies were proposed in ‘communities of colour’, critics of the restrictions sometimes took this line of reasoning a step further and argued that the policies unfairly targeted such communities.

In contrast with the nutrition-focused polices, people seldom criticised non-nutrition-focused policies as an inappropriate government intrusion. Instead, opponents of policies without a nutrition focus mainly argued that these measures would negatively affect the local economy by discouraging investment and entrepreneurship in the community.

So although it seems like a really sensible thing to do, developing planning policies that restrict fast food premises is no simple feat, especially if we public health advocates are going to continually use the reducing obesity argument.

This study found that nutrition-focused land-use policies faced more opposition, which was reflected both in newspaper coverage and in the fact that these policies were weaker (restrictions or temporary bans vs permanent bans) and less likely to have passed by local governments. It’s time to rethink our tactics. We already run the risk of being called ‘nanny staters’ and even more challenging is deciding how public health advocates can successfully argue against fast food premises when current planning policies focus mainly on improving the appearance of a community or bolstering its local businesses.