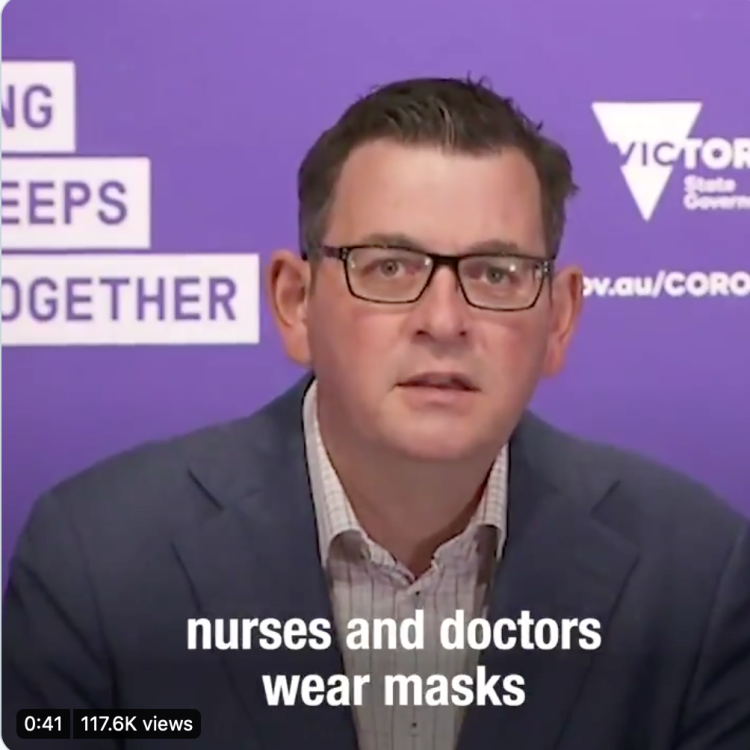 Introduction by Croakey: The daily COVID-19 press conferences held by Victorian Premier Daniel Andrews have exposed the general public to the raw and often combative environment of these events to a level which previously has not occurred.

This has prompted a heated discussion on Twitter about the conduct of journalists at these conferences, with some people making vitriolic comments about their reporting of the COVID-19 pandemic.

Award winning journalist and author, Margaret Simons, has responded via a Twitter thread addressing this criticism, outlines key features of the current media environment that influence reporting on COVID-19, and highlights the importance of continued scrutiny of government decisions by journalists.

The thread has been collated below.

Now the atmosphere around media in Victoria is slightly less shouty, I’m going to say something about it. Perhaps we can now move beyond the binary of “all journalists suck” on the side of the critics and “don’t tell us how to do our jobs, plebs” from the more arrogant journalists.

The Twitter storm was provoked largely because many people are watching Daniel Andrews’ media conferences live, and so are seeing how the news sausage is made. Normally, they just get the finished sausage.

It isn’t pretty. Of course it isn’t – inherently adversarial. And I would never defend every question asked by every journalist. And yes, some questions are silly and showy. And there is bias. And even good questioners can be repetitive.

The particularly willing media conference that caused the storm was provoked by the head of the judicial inquiry into the quarantine failures basically “giving permission” for questions to be asked and answered. That predictably caused a high water mark in aggressive questioning

I thought most of it was fair enough. I also thought Daniel Andrews did a good job in answering the questions, with the new information being emphasis on how he didn’t himself know the chain of responsibility. A revealing thing to say. I think it will have a long chain as we move on.

One of the strands of criticism of the media was that at the same time, many people were desperately trying to get information on detail of Stage 4 measures, including access to childcare etc, and they were frustrated by journalists not asking about that, but instead focussing on past events.

Very understandable. But this is to misunderstand the press conference as the main thing journalists do, rather than only the most visible thing.

Every day, journalists make dozens of phone calls seeking information, send dozens of emails. It is a constant and largely frustrating experience. That was happening last week at the same time as the political reporters (mainly) were going at Daniel Andrews.

Clear information is not always available. As we have seen, and as the Premier acknowledges, this is being done very fast and has never been done before and sometimes the reason journalists can’t get answers is because there are no answers.

That part of the process is not visible. Instead, you only get the end product – information, hopefully packaged in a way that is useful. There is also the invisible effect of journalists questions on the bureaucracy.

Nobody who has seen it doubts that the fact questions are being asked has an effect, even when the answers are hard to get. It makes it clear that the bureaucracy needs to find answers! It holds them to account.

Underlying all this are some problems. Some of the reporting – we all know the outlets – has been seriously biased and inacurate, and irresponsible, and the tendency is to move swiftly from that observation to assuming all journalists are hopeless and craven.

As well, there are fewer journalists than there used to be, and they are spread far too thin. Part of a long standing crisis which COVID-19 has merely emphasised – see the Public Interest Journalism account @PIJI_Journalism for more – also think that this thin-spreading is leading to an over-reliance by all outlets on the live blog format, which suits journalists because it allows rapid fire publication of scraps of information, as well as incorporation of social media activity.

But if you are a parent trying to find out about childcare arrangements, for example, it is an extremely frustrating format to navigate. Often, the need is for old fashioned inverted pyramid form news reports. Newsrooms need to be a bit more discriminating about liveblog use, in my opinion.

It is certainly also the case that journalistss tend to report politics top down, rather than bottom up. This too is a longstanding issue on which I have written previously. Also too much tendency to report it as though it were spectator sport rather than something in which all citizens have a stake. This, too, is a longstanding problem and while the COVID crisis has changed some journalistic habits, not all, not all the time.

I detect another trend. For years now it has been fashionable to mix opinion and reporting. But the crisis highlights that journalists’ main worth is to get the facts, to find things out. And that is what people are demanding of us.

Asking questions like “how can people ever trust you again” is a wasted opportunity at a press conference. Showy, spectator sport question all about the journalists’ egos. It cannot possibly result in more information.

But it is hard to imagine a society in which there were no journalists to ask questions of the Premier about the quarantine bungles. That would be a dangerous society, and not one in which I would want to live.

Yes, we have an inquiry – and that is as it should be. It should give us some answers. But it doesn’t mean, as the judge said, that all other questions should cease. How could that possibly be the case, when we are talking life and death as a result of government actions?

Meanwhile, I am grateful for the day to day work of many journalists making those phone calls, sending those emails, asking those questions and publishing the results.

Criticise by all means, but never allow that criticism to obscure the importance of what journalists do. Hold us to account, but do not deny our function.

Margaret Simons is an award-winning freelance journalist and the author of  many books and numerous articles and essays. She is also a journalism academic. Follow on Twitter: @MargaretSimons

PrevPreviousAs the NT election approaches, this is a critical health threat in search of political will
NextCalling for action, global and local, to avoid “media extinction”Next