#JustJustice: Campaign to save the NSW Custody Notification Service: ‘lifeline’ for Indigenous people in custody 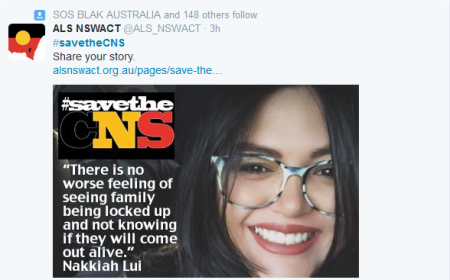 Many Croakey readers will know that we recently reached the target to fund the #JustJustice campaign at Croakey, to look at the solutions to over-incarceration of Aboriginal and Torres Strait Islander people. We will be starting work soon on the project, which aims to give a priority platform to community voices and stories. We’re very grateful for the support and will update everyone soon on progress.

In the meantime, there’s deep concern about the looming threat to the landmark Custody Notification Service (CNS) in New South Wales – which is set to lose its federal funding from July 1.

As PhD candidate Eugene Schofield-Georgeson writes in the post below (originally published at The Conversation) the CNS provides NSW with one of the most effective strategies in curbing Indigenous deaths in police custody.

There’s a strong #savetheCNS campaign on Twitter, nearly 14,000 have signed this change.org petition, and much lobbying elsewhere from others who know how important is the service that provides Indigenous prisoners in police custody with personal and legal advice. It also ensures that they receive adequate health care while monitoring their treatment by police. See more info and appeals for support from the NSW Aboriginal legal Service.

The New South Wales Council of Civil Liberties has this week written to Indigenous Affairs Minister Nigel Scullion and the Prime Minister Tony Abbott calling for the Federal Government to continue its funding of the CNS, saying:

The CNS has proved a vital, effective and low-cost service, acting as a lifeline for advice and support for Indigenous people in custody. We understand there have been no Aboriginal deaths in custody in NSW/ACT since the service began in 2000….
It would be a severe indictment on this Government’s commitment to Closing the Gap and reversing Indigenous incarceration rates if the CNS was to cease under its tenure.

Croakey today asked the Minister’s office for news about whether or not funding will be continued. We will update this post when we hear back.

The federal government is poised to abolish the Custody Notification Service in New South Wales through a funding cut on July 1 – for the sake of saving A$526,000 a year. For that modest amount, the service provides NSW with one of the most effective strategies in curbing Indigenous deaths in police custody.

The service is a telephone hotline that provides Indigenous prisoners in police custody with personal and legal advice. It also ensures that they receive adequate health care while monitoring their treatment by police.

NSW Aboriginal Legal Services CEO Kane Ellis has told me that the service is a “transparency measure” that “increases the professionalism of police”. It provides Indigenous people with assistance that is often:

… as simple as getting a person essential medication that can save a life.

Why the service is essential

At last count in 2013, Indigenous deaths in custody had spiked to all-time highs in other states and territories where the service has not been implemented, as well as among Indigenous prison populations.

The Royal Commission into Aboriginal Deaths in Custody in 1991 recommended the establishment of the Custody Notification Service. The reasons why the service must continue reflect the commission’s major findings. These are reasons that state and federal governments have mostly ignored since 1991.

The Custody Notification Service helps prevent Indigenous deaths in both police and prison custody by addressing the problem of over-representation of Indigenous offenders in prison through the provision of legal advice. Such advice usually informs an Indigenous person in custody of their right to silence. This prevents false confessions and unreliable evidence, thereby reducing unfair and unsafe convictions.

The right to silence for Indigenous people remains intact despite recent legislative amendments in NSW restricting the use of this legal right.

Background to its abolition

The Carr government implemented the Custody Notification Service as a compulsory custody right in NSW across a range of criminal legislation. Section 33 of the Law Enforcement (Powers and Responsibilities) Regulation provides that when an Aboriginal or Torres Strait Islander person is detained in police custody, a custody manager must immediately notify a representative of the Aboriginal Legal Service and inform the prisoner accordingly.

In one case, Justice Hidden of the NSW Supreme Court found confessional evidence from four Indigenous men was inadmissible as evidence in court because police failed to comply with the Custody Notification Service requirements under the legislation.

In 2013, former NSW attorney-general Greg Smith announced the O’Farrell government’s commitment to these laws. Accordingly, if the service is abolished in practice by funding cuts but remains on the statute books – as it almost certainly will – the NSW government will be faced with the absurd but very real proposition that most confessional evidence from Indigenous people in custody will be rendered inadmissible because police cannot contact an Aboriginal Legal Service representative.

However, requiring the service to operate through the charitable goodwill of its already overworked skeleton staff is an unreasonable and untenable demand.

Rather than abolishing this successful program, governments both state and federal should be implementing and funding more like it nationwide. Without the Custody Notification Service in NSW, deaths of Indigenous people in police custody will almost certainly increase, along with their over-representation in prison.

Eugene Schofield-Georgeson has worked as a Solicitor-Advocate for the North Australian Aboriginal Justice Agency (NAAJA) and is affiliated with the New South Wales Council for Civil Liberties (NSWCCL). 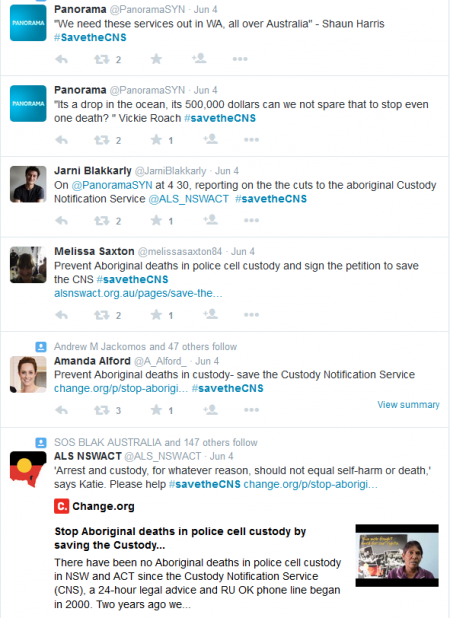