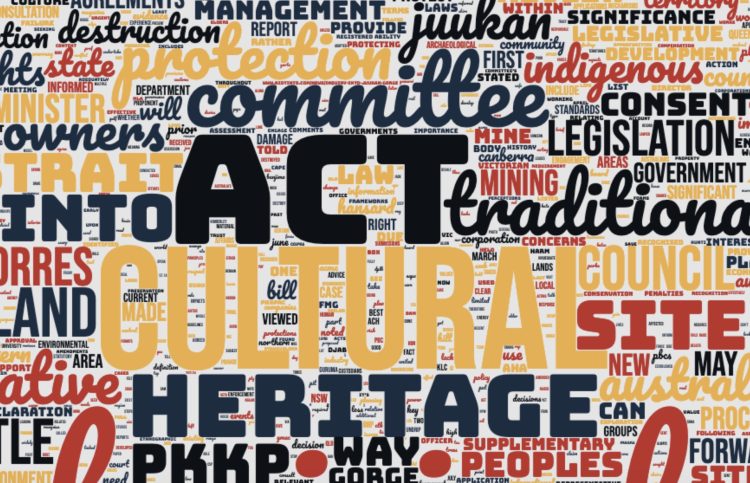 A word cloud made from the report, A Way Forward.

The destruction of ancient Aboriginal rock shelters at Juukan Gorge in Western Australia last year sparked outrage and highlighted the lack of protections for sacred sites across the country.

A Parliamentary Inquiry into the disaster has issued its final report, which includes a range of recommendations to prevent future desecration of Indigenous heritage sites.

In the article below, Professor Deanna Kemp, Professor Bronwyn Fredericks and Rodger Barnes of The University of Queensland, and Kado Muir of the National Native Title Council and Ngalia Cultural Leader, Indigenous Knowledge, say the report is strong on the need for change, but achieving reform will be far from straightforward.

This article was first published in The Conversation under the title, ‘Fixing Australia’s shocking record of Indigenous heritage destruction: Juukan inquiry offers a way forward’.

In tabling the report, committee chair and Liberal MP Warren Entsch said while the destruction was a disaster for traditional owners – the Puutu Kunti Kurrama and Pinikura peoples – it was “not unique”.

Rio Tinto’s actions form part of a broader discriminatory pattern of development in Australia. Traditional owners are denied the right to object and as a result, Aboriginal heritage is routinely destroyed.

The committee’s final report grapples with the complex issues of cultural heritage protection in Australia. It recommends major legislative reforms, including:

The report is strong on the need for change, although achieving this will be far from straightforward. 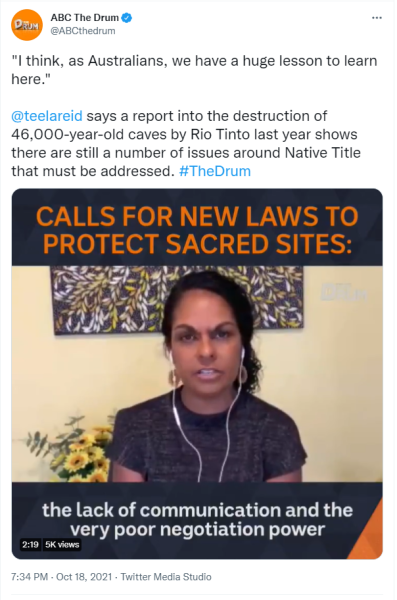 The committee’s interim report was released in December last year. From it, we learned how Rio Tinto silenced traditional owners and prevented their cultural heritage specialists from raising concerns. Rio Tinto prioritised production over heritage protection.

A Way Forward places the tragedy of Juukan Gorge in a broader context. It shines a light on how the regulatory system empowered Rio Tinto to destroy the caves and prevented the Puutu Kunti Kurrama and Pinikura peoples from doing anything about it.

It also demonstrates how the system has run roughshod over Indigenous interests for decades. Governments have been able to make determinations about cultural heritage without proper consultation and consent.

The report focuses on getting the regulatory framework right. It succeeds in bringing a wide and complex set of controversial issues together in the one place. But many of these issues are highly contested, which has hindered previous attempts to solve them.

Already, two committee members, Senator Dean Smith and MP George Christensen, disagree with the rest of the committee on the need for the Commonwealth to set standards for states’ cultural heritage protection laws. They say this would constrain the mining industry and give anti-mining activists too much power.

In contrast, Greens Senator and Gunnai Gunditjmara and Djab Wurrung woman Lidia Thorpe supports traditional owners having a “right to veto” the destruction of their cultural heritage.

Western Australian Premier Mark McGowan and some industry organisations have dismissed the inquiry’s calls for a stronger federal government role in protecting cultural heritage across Australia. Western Australia is yet to pass its draft heritage law, which the premier says will address the issues raised in the final report.

Aboriginal groups disagree that ultimate control over the destruction of cultural heritage should rest with the minister. These groups have tabled their issues at the United Nations.

One of the most contentious matters addressed in the final report is the need to obtain free prior and informed consent of traditional owners under Australia’s federal and state laws, affording them the right to manage their own heritage sites.

It is not an ideal time to be driving this type of major change. Australia is heading towards a federal election. The Federal Government is focused on COVID-19 vaccinations, opening borders and the nation’s economic recovery from the pandemic.

The mining sector sits at the centre of Australia’s economic recovery, with climate change driving demand for energy transition minerals. Australian states and territories are focused on mining these minerals for green and renewable technologies.

Green technologies will require more extraction of copper, nickel, lithium, cobalt, and other critical minerals, often located on Indigenous peoples’ lands and territories. This will put added pressure on the consent processes that A Way Forward recommends so strongly. 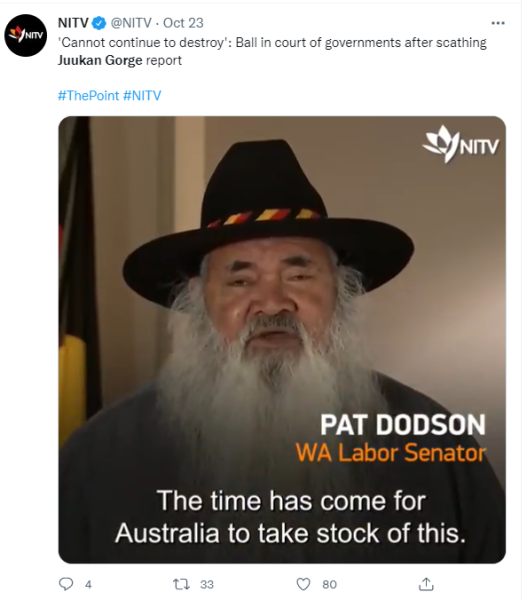 So far, none of the big mining companies have come out in support of the committee’s recommendations for regulatory reform. But there are some positive prospects for change.

The inquiry has helped generate public awareness and a greater appreciation of Australia’s Indigenous heritage and the need to protect it. Australia’s commitments to the United Nations Declaration on the Rights of Indigenous Peoples have come under national and international scrutiny. This has added weight to the inquiry’s recommendations to elevate the importance of free prior and informed consent.

Institutional investors such as HESTA and Australian Council of Superannuation Investors have publicly supported the inquiry’s recommendations.

In the absence of regulatory reform to address systemic issues, Indigenous groups such as the National Native Title Council continue working with investor groups and peak industry bodies for change through developing voluntary guidelines and other formal commitments.

Indigenous Affairs Minister Ken Wyatt, along with the National Indigenous Australians Agency, has demonstrated capacity for co-design through their work on the Closing the Gap refresh.

Returning responsibility for cultural heritage to the Indigenous affairs minister’s portfolio, as recommended in the final report, could be a positive step.

Nothing short of the recommended reforms in the report will address the lessons learned from Juukan Gorge. The public must be vigilant in holding business, investors, and politicians to account by insisting on meaningful change.

Deanna is chief investigator of an ARC Linkage grant on public-private inquiries in mining; member of the International Council of Mining and Metals independent expert review panel; and trustee and member of the international advisory council for the Institute for Human Rights and Business. She is Director of the Centre for Social Responsibility in Mining (CSRM) at UQ. CSRM conducts applied research with communities, governments, and major mining companies. Deanna was previously the BMA Chair in Indigenous Engagement at the CQUniversity, Australia (2013-2018).

Kado Muir is the chairperson of the National Native Title Council, which operates with funding from the federal government.

Rodger is a Research Manager at the Centre for Social Responsibility in Mining (CSRM) at UQ, which conducts applied research with communities, governments, and mining companies, including Rio Tinto.

PrevPreviousAustralian nurses look to champion change ahead
NextOn planet, health and hope: what a roller coaster of a rideNext