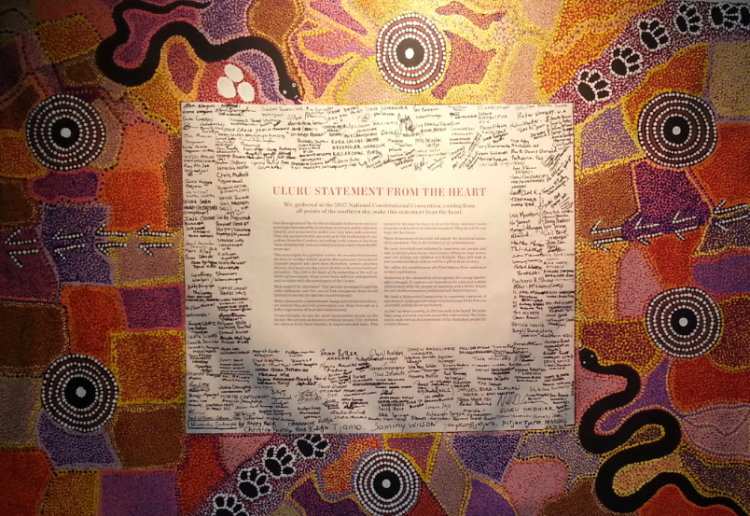 Uluru Statement from the Heart: on display at the Darwin Aboriginal Art Fair 2017: Photo by Lea McInerney

“Keep a copy of the Uluru Statement, share it, talk about it, understand it. It is history in the making”

We were told to go away, in the spirit of self-determination, and come up with a proposal to forward the constitutional change agenda. Invited to participate, to work with Aboriginal and Torres Strait Islander peoples from across the land to form a position, both leaders from our major political parties declined, didn’t want to impose themselves on the machinations of our important work.

And so, in May of this year over 250 Aboriginal and Torres Strait Islander leaders met at the foot of Uluru in Central Australia on the lands of the Aṉangu people. In good faith they confronted the daunting task of working toward a consensus position that would encapsulate the dreams and hopes of the diverse nations of the first peoples.

Over three arduous days, the leaders were tested intellectually and emotionally. At the end of it all, the majority resolved in the Uluru Statement from the Heart, a statement in my humble opinion that will go down in history as one of the most eloquent and substantial social justice statements in modern Australian history.

‘We seek constitutional reforms to empower our people and take a rightful place in our own country. When we have power over our destiny our children will flourish. They will walk in two worlds and their culture will be a gift to their country.

We call for the establishment of a First Nations Voice enshrined in the Constitution.’ – Uluru Statement for the Heart

In short, the Uluru Statement calls for recognition of Australia’s first peoples not in purely symbolic terms, to merely fix a historical wrong, but to permanently enshrine the First Nations Voice in the constitution. A voice in Parliament that will act as a consultative body to government that will help ensure the ill-advised and damaging policies inflicted on Aboriginal and Torres Strait peoples in history are not doomed to be repeated no matter the motive.

The second practical element the statement calls for is the establishment of ‘a Makarrata Commission to supervise a process of agreement-making between governments and First Nations and truth-telling about our history’.

The commission creates a practical mechanism that recognises diversity within the Aboriginal and Torres Strait islander community, which consists of over 500 clans (I wonder how many Australians know that). The talk of treaty has been a part of the broader political lexicon since Bob Hawke was presented with the Barunga Statement, which called for a treaty with the Commonwealth of Australia. Despite a bit of grandstanding from Hawke, nothing happened. That’s not to say the passion, pride and bravery of those who have come before us doesn’t empower us to this very day. No Barunga statement, no Uluru statement.

Those of us who are advocates for our people or are students of the history of the struggle know that governments come and go. Opposition often comes in the guise of political fads, politicians gripped by opinion polls both negative and positive.

However, the tide of social justice, getting a society to a point where it has no option but to do the merely decent thing, rolls on. Those that walked off the Cummeragunja mission in 1939 knew it, those that boarded the bus for the freedom ride knew it, Vincent Lingiari and the cattlemen of at Wave Hill Cattle Station knew it and the countless everyday men and women of the 500 clans also know it.

The Aboriginal and Torres Strait Islander community were asked by the Government to give our view on constitutional reform, it was given and after several months of  ‘deliberation’ the Turnbull government rejected the Uluru Statement and the modest and meaningful proposals within.

The Prime Minister explained the decision not to support the Statement as follows:

‘You don’t respect people by telling them what they want to hear or by kicking ideas you think have no merit off into the long grass or into a committee.
You have got to be fair dinkum, you’ve got to be forthright.
We believe it is important to deliver recognition, but focus on things that are achievable.’

This has been the problem all along, not the ambition and desires of Aboriginal and Torres Strait Islander peoples, but the lack of vision and expectation the broader community, our political leadership in particular, have had for us.

The flagrant disregard of the work of the delegates, their  wisdom, experience and hard work is offensive. What really grates is the eagerness of many of our parliamentarians to see section 44 of the constitution changed in light of the inept citizenship scandal, i.e. to save their own necks before even considering putting right an unjustified historical wrong.

Lack of ambition from the political class hasn’t stopped us before and it won’t stop us now. I encourage you to keep a copy of the Uluru Statement, share with your friends, talk about it and understand it and its context.

It is history in the making.