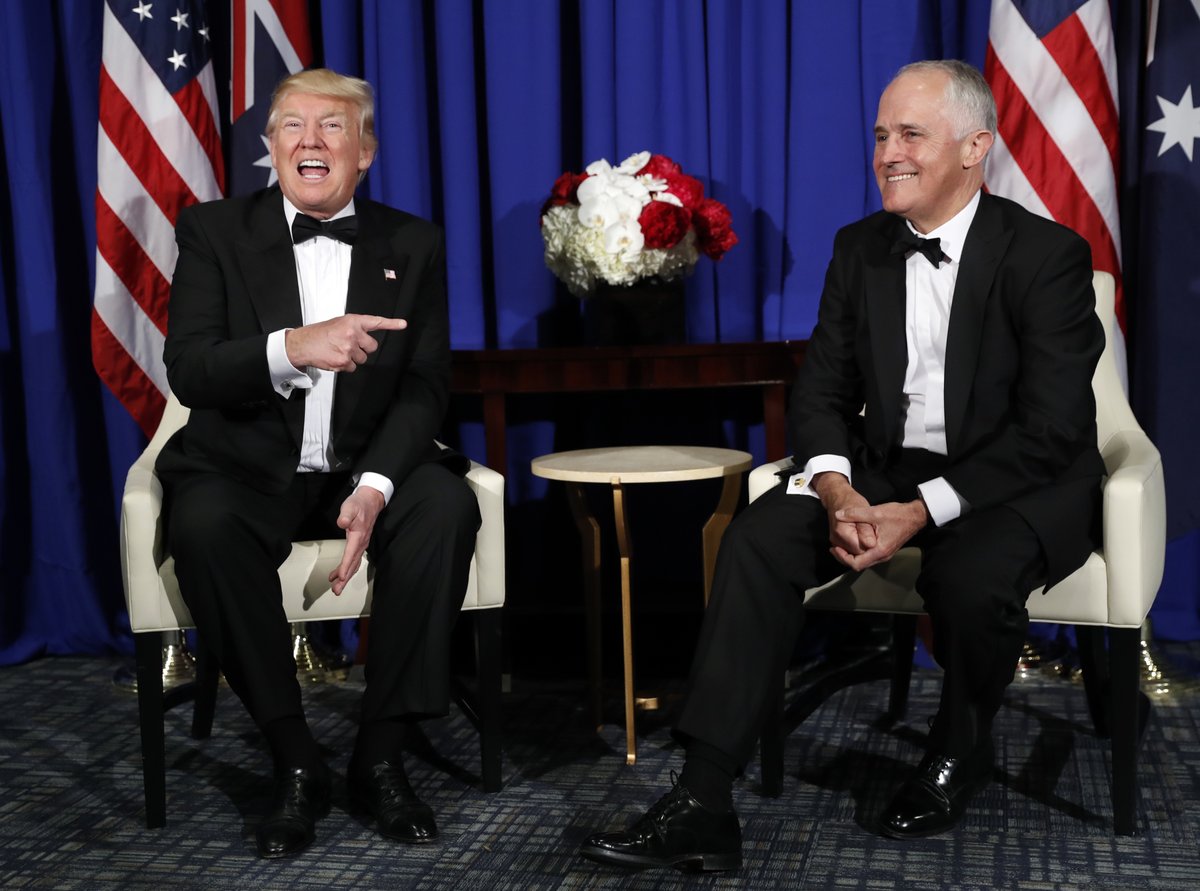 Awkward praise by Prime Minister Malcolm Turnbull for US President Donald Trump’s repeal of the Obama administration’s Affordable Care Act might give Australians pause on the eve of the Federal Budget, experts have warned, with health spending expected to be a red-ticket item amid several major reviews into the health system.

Turnbull made headlines with remarks at a Coral Sea Battle commemoration dinner in the United States, commending Trump for winning a major concession in his bid to roll back the ACA, telling him “keep at it, it’s great”.

Here’s the Channel Nine video of Turnbull praising Trump for the repeal of Obamacare: “So keep at it, it’s great” https://t.co/tmgwcHMli2 pic.twitter.com/QAiLePLJJu

Compounding the awkwardness of the exchange, Trump had prefaced Turnbull’s remarks with praise for Australia’s health care system, which he described as better than America’s. (The White House has since walked back this statement, while Trump himself has sought to clarify that ‘everyone’ has better health care than America).

Of course the Australians have better healthcare than we do –everybody does. ObamaCare is dead! But our healthcare will soon be great.

The rhetoric raised eyebrows back home in Australia, where the incumbent Turnbull government endured a “Mediscare” campaign by the Labor-led opposition on the privatisation of universal health care, and the first Federal Budget since the election is due to be handed down on Tuesday.

After being made to wait. Turnbull congratulates Trump on a healthcare bill that might see Rape and DV as ‘preexisting conditions’. Pathetic pic.twitter.com/9KsiX4tFKE

In short, Trump just took $1 trillion from the middle-class and poor, and gave it to billionaires. And Turnbull praised it. Shameful. https://t.co/e5Vu250ptR

Turnbull believes the repeal of Obamacare “is great”. Libs hate Medicare & want to take us down US road of survival of the fittest #auspol

It’s not the first time the current Australian government has been captured praising the US health system; Health Minister Greg Hunt famously used his maiden speech to parliament to advocate for US-style health inusrance.

Leaders in the health space have expressed concern at Turnbull’s turn of phrase as the Federal Budget looms. We’ve rounded up some of the highlights below — please get in touch with your thoughts, and join us on the hashtag #healthbudget17.

We’re hoping PM Turnbull’s warm words for President Trump on the repeal of the US Affordable Care Act were an unfortunate slip of the tongue.  There have been repeated reassurances from the Prime Minister of the Coalition’s support for universal health care, and we hope this week’s budget will confirm that support is not diminished.  President Trump acknowledged that Australia has a much better and more affordable health system than the United States – and this has been achieved largely through a half century of commitment to universal health care.

Donald Trump and the Republican Party are exulting in the fact that the House of Representatives has passed a bill that will deprive some 24 million Americans of health insurance and undermine protections around access and affordability for many more.  There’s every reason to believe Trump neither knows nor cares about what is in this bill – it’s about political ideology and destroying Obama’s legacy.
Malcolm Turnbull’s congratulations to Trump was at best thoughtless; at worse it gives 24 million Australians reasons to ponder – yet again – the commitment of the LNP government to the universality and sustainability of Medicare.

We must hope that the Prime Minister’s congratulations to President Trump on the legislation unwinding Obamacare was a diplomatic courtesy.  Certainly the Prime Minister did not specifically welcome the new provisions which are expected to worsen health inequities in the United States.

It does appear on the eve of the Budget that the Mediscare jolt to the Coalition at the last federal election has convinced the Government of the public’s support for a strong and equitable national health system and thus it is expected to lift the freeze on Medicare payments and drop other “zombie” measures like the proposed $5 PBS co-payment.

My reading of Turnbull’s comments is that they were referring to the politics of the issue rather than the policy.  Turnbull may not be Medicare’s greatest friend but even he is not so ideologically blinkered as to embrace the high cost, low value, inefficient and inequitable US health system as a positive example of a more ‘free market’ approach to health care.

However, on one level I think it is telling – the fact that Turnbull is so little engaged with health policy that he can make a throw-away line like that without understanding its resonance reflects how important the macro-political environment is when making decisions that impact upon the health system.

Budgetary pressures, short-term goals, media headlines and trade-offs between different voter groups will all feature much more prominently in the Government’s decision making than sensible, efficient and evidence-based policy.  This is one reason why the Australian Healthcare Reform Alliance (AHCRA) suggests establishing an independent body to oversee the development of health policies and programs.

In the meantime, it is important that interest groups and stakeholders understand where their issues and concerns sit in the hierarchy of politicians’ priorities, if they want the best chance of influencing policy decisions.