It is expected the campaign will reach up to 80 per cent of Australians aged between 12 and 18. It uses a digital tracking methodology, which – in conjunction with a cohort study that will survey and interview young people over time – will measure its impact on behaviour change.

In the article below, the lead researcher for the Safe and Well Online project, Dr Barbara Spears from the University of South Australia, explains some of the background to the campaign, including the role of young people in its development.

As a researcher involved in the Young and Well CRC’s Safe and Well Online project and Keep it Tame campaign, I thought I would share some thinking behind the use of online social marketing as an emerging strategy to address cyberbullying and other cybersafety issues.

This article is drawn from a recently published book chapter I co-wrote, and I encourage you to read further (see reference below).

Bullying remains a highly significant issue for young people in schools and, as we all know, the increasingly available and ready access to technology and social media has seen cyberbullying emerge as the latest version of this age-old problem. 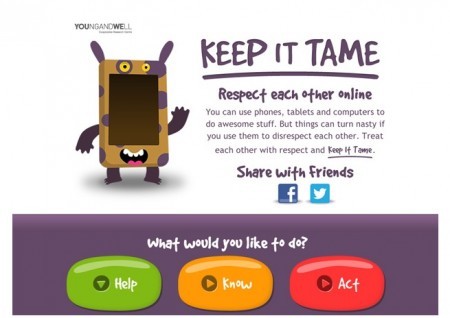 We know that bullying results in a range of social, physical and mental health-related outcomes, leading to profound impacts on young people and the broader community.

Currently, strategies to explore cyberbullying are drawn from ‘traditional’ bullying interventions and approaches, but we really need to be asking ourselves the question: are these the best strategies to change young people’s negative online behaviours?

We know from research that there is an overlap between those who bully offline, and those who bully online, suggesting that they are not totally separate or independent behaviours. This would appear to support using traditional approaches for cases of cyberbullying.

However, as technology is employed in the act of cyberbullying, there is the possibility that different methodologies and ways of intervening need to be considered.

Traditionally, we have employed strategies specifically targeting the: individual; peer group; classroom management and curriculum; and school policy and climate, with the most recent approaches targeting the whole school community, engaging parents and support staff, in a united effort to reduce these aggressive interactions.

The whole-school approach seems to be the most promising of these, but the range of interventions across all dimensions serve to highlight the complexity of bullying per se. (See Rigby & Smith 2011).

In addition, translational research, which is concerned with the sustainability and generalisability of successful programs, highlights a shift towards addressing the system, rather than the individual, in efforts to prevent, promote and intervene against bullying.

Cyberbullying, however, presents several challenges simply because of the mediums used and because there remain many unknowns. Issues of anonymity, repetition and constant advances in technology present potentially new ways of bullying, and, for the first time, school-related bullying is not occurring in real-time, or even in school settings.

Young people’s use of technologies

Adults also, do not know from first-hand experience, for example, what it is like to be an adolescent, socialising in this social media-driven peer context.

This represents a significant shift, as adults are trying to comprehend a phenomenon and provide intervention for a problem that they do not ‘know’ from their own experience base. It is highly relevant then, to consider the agency and role of youth voice in directing and understanding efforts to prevent and intervene in cases of cyberbullying.

As young people increasingly socialise through progressively sophisticated social media, moving seamlessly between online and offline environments, some thought needs to be given to employing social media and online environments as potential platforms for intervention.

Early efforts at dealing with cyberbullying, and indeed, still continuing today, have seen the creation of a plethora of self-help and information-sharing web sites for students, teachers and parents to visit; yet many of these have remained largely static in design.

But are these actually useful in reaching young people where they congregate and socialise online? What evidence do we have, other than web analytics which indicate how many times the site has been visited and how long they stayed or clicked through the site, of these web portals actually impacting on, and changing young people’s behaviour?

Given the cumulative difference in web technologies over time, from static to interactive, to user-centred design where everyone is a creator/publisher, to the convergence towards mobile platforms which enable messages to go ‘viral’ and spread across the globe, it would seem opportune to be thinking about moving directly into the online spaces where young people actually are hanging out (see Danah Boyd’s work) to deliver youth-led, user-designed anti-cyberbullying messages.

This is therefore an emerging methodological strategy to address cybersafety and cyberbullying, using authentic advocacy and messaging direct from young people to young people.

Social marketing techniques have been employed for many years across communities to deliver messages that are designed for social good: for example, anti-smoking and other public health-related campaigns.

Interestingly, some public health researchers are turning to schools as targeted settings to deliver their messages, at a time when some cyberbullying researchers are looking to online settings: hence it is the online social marketing techniques which are of interest here, as the online environment is central to young people’s socialising in contemporary societies.

The question follows: how can online social marketing be used to promote positive behaviour in relation to bullying and cyberbullying practices, to improve young people’s mental health and wellbeing?

Further to this is the question relating to how young people can harness these techniques to develop, deliver and test user-driven anti-cyberbullying messaging which is relevant and authentic to them.

Young people have always actively contributed to social, economic, environmental and political change, but the combination of the internet, the rapid adoption of technologies by young people and the associated power to influence and mobilise others, actually gives young people the opportunity to take control over the messages which are constructed about them and their lives.

Providing opportunities for young people to successfully advocate for, participate in, and drive social change, such as through the creation and delivery of anti-cyberbullying messaging, is essential.

Young people however, should not just be ‘data providers’, but must act as co-researchers, who partner with researchers to deepen the knowledge and experience-base of the phenomenon.

Co-construction of meaning in relation to cyberbullying is particularly relevant, as adults have no experiences of this themselves when younger. This process is important, as it elevates young people to a position of equal power, challenging researchers to recognise and value their knowledge and experiences (see this article on young people’s voices informing school action on cyberbullying).

The online environment is a challenging one for researchers as they have needed to not only learn about and adapt to it, but have also had to contend with bringing their own assumptions about bullying, derived from their experiences from offline schooling contexts and a history of research that spans nearly four decades.

The online environment is neither a school setting nor a social institution: it is a setting which sits symbiotically with the school/home environment, yet is also a system which operates in concert with and intersects the individual, school, family and wider community.

How researchers understand the online environment: either as simply an extension of their social reality, or as a third dimension encircling the child and its environments, or as a new environment/system with different contexts and rules together with ever increasing ways of accessing it, presents fundamental and ongoing challenges, which in turn, influence the approaches used to explore cyberbullying (see this report on the opportunities and challenges of online psychological research).

What the Young and Well CRC is doing

Online social marketing is being used in the Young and Well CRC to target young people’s attitudes and behaviours related to cybersafety and cyberbullying, with a view towards not only increasing online responsibility and subsequently ethical digital citizenship, but decreasing the harmful interactions which lead to profound impacts on young people who are constantly targeted in mean and harmful ways.

Developed in conjunction with young people, these campaigns will be tested for impact, reach and effectiveness over the next four years. We look forward to reporting on our journey as we uncover the intricacies of this environment and its relation to human behaviours.

Keep it Tame, launched 12 November 2012, is the first of these campaigns and draws attention to the consequence of thoughtless and hurtful use of social media and empowers teenagers to act with respect online.

• Dr Barbara Spears is a leading internationally recognised researcher of girls’ bullying and cyberbullying. She is a Senior Lecturer at the University of South Australia and a contributor to the Young and Well CRC’s Safe and Well Online project.