Keep Me Safe Tonight: seeking your support for a documentary

Sadly, suicide remains the leading cause of death for men under 44 and women under 34 in Australia.(1)

Despite reductions in rates since the mid-1990s, suicide still claims more lives than road accidents (2359 suicides to 1367 road accidents in 2010)(2) yet most of us are not nearly as well educated on suicide prevention as we are on safe driving.

In August 2011, the Australian Press Council updated its guidelines on suicide reporting. While the guidelines still ask for caution in reporting suicide deaths and pose a number of considerations, they acknowledge that responsible reporting of the broader issue can be beneficial for the community.

Following this change in guidelines, a number of newspapers including The Age have reported on the issue of suicide in the past year, inspiring my teammates and I to make a documentary about suicide.

The idea eventually evolved into Keep Me Safe Tonight, a half hour documentary to be broadcast on the ABC2 later this year as part of the Opening Shot series for 2013.

Opening Shot is a unique series comprised of five standalone documentaries made by independent filmmakers under the age of 35. Each documentary tackles a contemporary issue that matters to my generation. I am the producer of Keep Me Safe Tonight and I am working alongside director Corrie Chen and writer Michelle Law.

While it is widely accepted by the suicide prevention community that talking about suicide in the media can be beneficial, the big question is: How do we talk about it?

Unlike a TV news piece, the aim of a documentary isn’t to convey the most dramatic elements of an incident in two minutes, but to tell a story with fleshed out emotional arcs and characters with whom the audience can empathise.

We want to document the stories of people who can provide us with the deepest insight into suicide. It quickly became evident through our research that social stigma surrounding suicide and the associated mental health problems is the biggest obstacle for suicide prevention.

When confronted by the knowledge that a friend is feeling suicidal, how many of us have said: “But you have so much to live for”;  “Don’t be selfish, you will hurt your family”; or “Why would you do something so crazy?” Selfish and crazy – such is the judgment and dismissiveness faced by those who are suffering. So is it then a surprise that most suicidal people do not seek help?

It has always been our intention that the heart and soul of the film is the story of someone who had once attempted suicide and been a victim to stigma.

We want to capture a candid recount that reveals something true about the darkest as well as the brightest moments. We want the audience to sit in the mud with that person and take a moment to listen and then we want them to see that there’s always hope.

Interviewing someone who had once come so close to the edge will mean we must enact proper duty of care. We are looking for someone who is in a position to reflect on the past with maturity and frankness. We are striving to be sensitive and insightful, never sensational.

We have been consulting with mental health and suicide prevention organisations every step of the way to ensure that we are being responsible filmmakers.

Our film will also feature someone who works at a telephone crisis centre. These incredible men and women literally save lives on a daily basis. Their story will illustrate the difference that one can make for someone in crisis by offering to listen without judgment.

The third story will take us to the aftermath of a suicide. People bereaved by suicide often feel guilt for not recognising the signs that someone may be feeling suicidal, or anger at the deceased for making a decision that causes others so much pain. We will explore how these complex feelings are tempered by the same stigma that stops suicidal people from speaking out.

We want these interweaving stories to inspire individuals to take personal action against the stigma surrounding suicide.

The documentary is currently in the process of completing its financing.

Like most TV programs in Australia, Keep Me Safe Tonight is financed by bringing together several funders such as a broadcaster and government film-financing agencies. We have successfully secured the majority of the funds needed to make the film but we are short by a small, yet critical, amount.

To raise that final amount, we began a crowd funding campaign on Pozible.

Pozible allows creative projects to accept online donations from members of the community. We have been spreading the word about our campaign through social media and local press.

We also received promotional support from organisations and community groups such as Suicide Prevention Australia, Young and Well CRC, Headspace, Mental Health Association NSW, ReachOut.com, Soften The F*ck Up, and Mental Health Awareness Australia, as well as passionate individuals who really believe in what we’re doing.

So far, we’ve successfully raised over $7200 through this platform and we’ve got till Tuesday March 5th to raise the remaining $2,800. After we reach our fundraising target, we will be fully financed and ready to start filming.

The inspiration for the title of our film comes from a night of research we did at Lifeline. We had heard a telephone crisis supporter say to a caller “my job is to keep you safe tonight.”

Those words really resonated with us because we believe it is all of our jobs to keep our friends, family members, colleagues and neighbours safe.

If you would like to pledge to Keep Me Safe Tonight please visit: www.pozible.com/keepmesafe 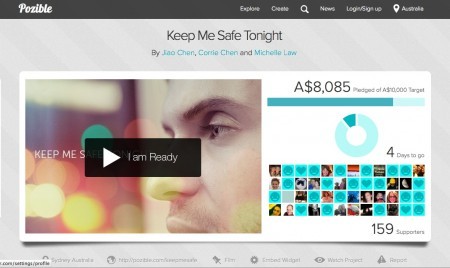