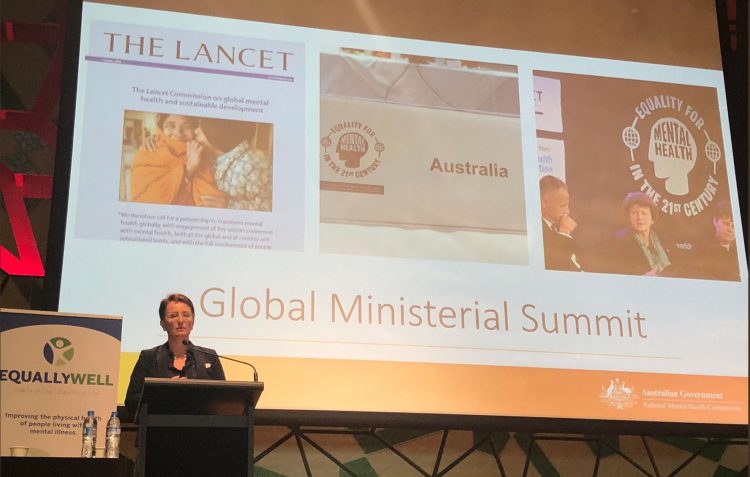 Keeping body and mind together with Medicare

Introduction by Croakey: More than 37,000 people have signed an online petition protesting against a Medicare compliance initiative that critics fear will deter holistic treatment for people with mental health concerns.

Leanne Wells, CEO of the Consumers Health Forum of Australia, writes below that the concerns raised by the crackdown are symptomatic of a health system under strain.

(And see also our comprehensive report from the Equally Well Symposium in Melbourne last year, which highlighted a global push to improve the physical health of people with mental health issues, as illustrated in the feature image above from the event).

The recent letter sent to GPs warning against co-billing Medicare for physical and mental health issues is as concerning for health consumers as it is for doctors.

We expect Medicare funding to be used appropriately to deliver high-value care and for waste to be avoided, but the treatment of physical and mental health issues alongside each other in a coordinated manner is not an example of waste in the system.

In contrast, it is a key element of patient-centred, whole-of-person health care.

We understand that since the letters were sent, the Department of Health has moved to address rising concerns, stating that there is no suggestion that treating mental and physical conditions in the same consultation is inappropriate.

This clarification is important and must be backed up with reforms that encourage rather than discourage a more holistic approach.

When Medicare was established in 1984, doctors were more commonly providing episodic services such as treatment of infectious disease and injuries. Today a typical caseload is dominated by ongoing care for patients with chronic conditions such as diabetes, cardiovascular disease, cancers, arthritis, back pain, asthma and mental illness.

The Health Department’s own figures show that one in two Australians has at least one of these chronic conditions, and nearly one in four have two or more.

For example, a patient who has both diabetes and anxiety should be able to discuss both issues in one consultation with their GP. A cancer patient who is depressed due to their extensive treatment regime or the side effects of their medication needs to have these issues considered collectively, not in isolation.

A person’s health is not compartmentalised into individual body parts or diagnoses: their care shouldn’t be either.

Consumers value GPs who will spend the extra time to consider them as a person and understand that each issue exists within a broader context.

The community does not want to see Medicare funds abused in the form of fraud or outright overservicing, but a heavy-handed compliance approach which discourages GPs from delivering whole-of-person care will lead to worse patient outcomes.

It is also unreasonable to expect that consumers will have the time and money to return for a second consultation when two issues could easily be dealt with at once. Too many people already avoid going to the doctor, filling scripts and taking up referrals due to cost.

This is yet another example of the pathology of a health system under strain. We continue to rely on funding arrangements that include adverse incentives to achieve volumes of services rather than better outcomes through team-based, co-ordinated care.

We need integrated primary health care that provides personalised, patient-focussed services that keep people well and away from hospital. Services that bring care for physical and mental health together rather than separate them are the hallmarks of a system when it is working well.

We need a system that more actively encourages and rewards GPs to work in teams to provide care that meets the needs of the whole patient, not just one part of them. Otherwise we risk our health system becoming one where universal access to high quality health care exists in principle but not in practice.

It is time to modernise Medicare. Health Minister Greg Hunt’s Primary Health Care 10-Year Plan is an opportunity to ensure that it is fit-for-purpose for 21st century care.

PrevPreviousCompulsory isolation in the fight against coronavirus: a clash of human rights and public health
NextCOVID-19: Lessons from South Korea’s quick responseNext