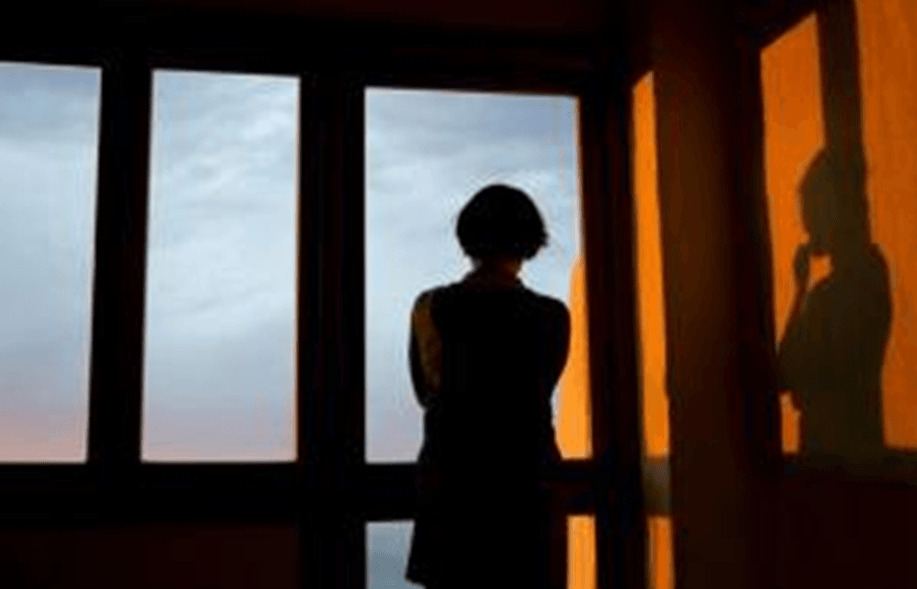 “Killing with kindness” – calling out some myths about smoking, mental health and substance abuse

Clinicians and health services who think it is too much to ask people with mental health and drug and alcohol issues to give up smoking are “killing them with kindness”, according to a senior researcher.

Professor Amanda Baker, from the University of Newcastle, said that high smoking rates among people with mental health and drug and alcohol issues are a huge problem, which remains largely hidden in the health and tobacco control sector while imposing a terrible physical health burden.

Smoking rates among these groups are gravely high, particularly when they are in treatment – up to 80 per cent of people in residential rehabilitation facilities smoke, compared to 14 per cent in the general population, she said.

While there is a range of factors involved, including self-medication, a major and easily preventable driver is a reluctance by mental health and social service professionals to offer smoking cessation programs and to even consider the idea that patients or clients should quit smoking.

But we now know that’s not the case. In fact, mental health improves when people stop smoking and people’s drug and alcohol problems don’t worsen.

We are killing them with ‘kindness’.”

In the busy, low resource environment of a mental health or drug and alcohol service or facility, tobacco did not cause the disturbance that other drugs like amphetamines do, “so we tend to overlook it”.

Conversely, services are also afraid that people will become aggressive if they can’t smoke.

These concerns also were outlined powerfully at the conference by a mental health peer support worker, who told delegates she had been “very shocked” by the views and attitudes of some staff about smoking when she moved into a tackling tobacco role (her presentation will be covered in a forthcoming Croakey article).

Another presenter, Jane Galea-Singer, from the Auckland District Health Board, also talked about the impact of a traditional “tolerance” towards smoking in mental health and addictions services in New Zealand.

“A few weeks ago someone in Customs told me that all of the cigarettes they used to confiscate, they would give to mental health institutions and the homeless,” she said.

Watch an interview with Galea-Singer at the bottom of the post to hear about the Let’s Kick Butt, incentivised mass quit challenge her service runs each year.

Baker is a National Health and Medical Research Council Senior Research Fellow at the University of Newcastle, who specialises in the treatment of co-existing mental health and substance use problems.

She has been an advisor during the transition of forensic hospitals to smoke-free facilities, and is currently working on a phone-delivered smoking cessation program for people with mental health problems, in partnership with Quitline Victoria.

Having always assumed that people with severe mental illness need intensive individual intervention for smoking with face-to-face treatment, she’s buoyed by the results of a trial program showing that phone intervention is simpler, briefer and just as effective.

A clinical psychologist, Baker remembers smoking with her patients in her early days in the profession in the 1980s, when it was a very “socially acceptable” way of connecting.

But the shocking rates of smoking among those being treated for mental health and substance abuse, and how they were overlooked as an issue in mental health and drug and alcohol silos, really came home to her about 20 years ago.

People were spending their pension on cigarettes, they were really in poor health. I could see that smoking was not being addressed (by services), there was no interest.

We found in one of our trials that one third of people actually took up smoking when they were admitted to mental health hospitals.”

Thus Baker welcomed the focus of a number of presentations at the #OTCC2017 on mental health and smoking cessation, but she urged tobacco control researchers to include more people from the cohort into studies to really dig down into what treatments work.

“So there’s been very minimal research in the real world clients on how treatments will work.”

Baker also called on tobacco control experts in Australia to be more open to the potential of e-cigarettes, which are effectively banned here, citing one small study (of 14 people) where 50 per cent of smokers with schizophrenia reduced their smoking by 50 per cent over a full year, and 14 per cent quit.

“We’re among friends, let’s find out if e-cigarettes are helpful, it’s an empirical question,” she said, likening the issue to harm reduction debates about methadone in the 1980s.

But Baker said there was light on the horizon from standard quit smoking programs too, with emerging evidence that treatments combining pharmacotherapy and psychotherapy work, with variability about combinations, length of time, frequency and manner of delivery that will affect individual and broader interventions.

Studies also show that smokers with mental health and drug and alcohol problems are as motivated to quit as others and that is now being seen in smoking rates, that while still very high, are beginning to fall (see slide below). 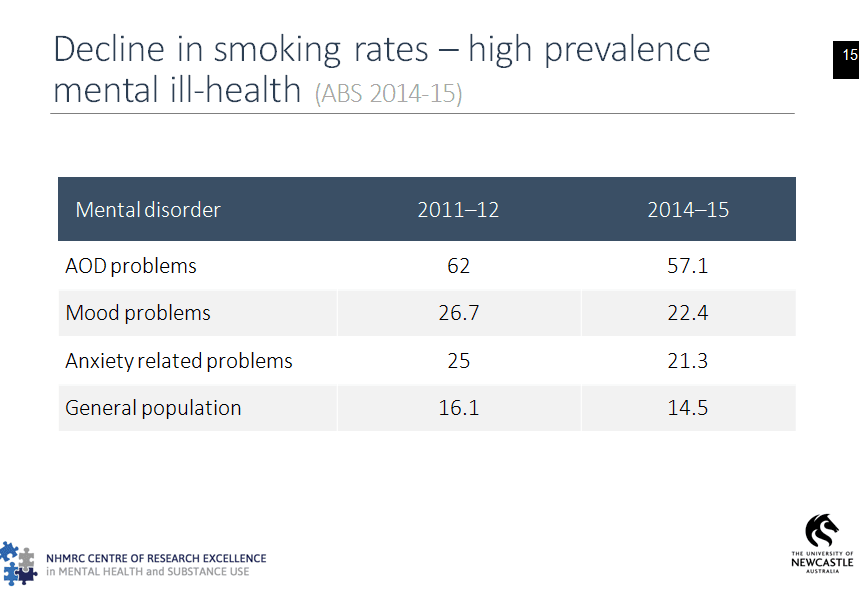 And, Baker said, treatment settings and the most severe mental health issues should not be the last places to start, even though they may seem the most difficult.

“There’s no need to pussy foot around,” she said. “We should treat smokers within treatment and once they are discharged.”

See slide below of smoking rates in treatment settings, including community health services. 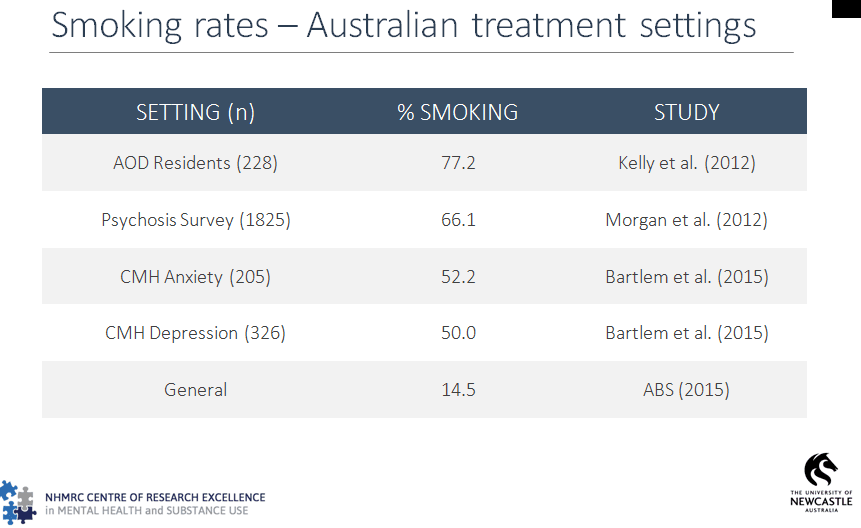 Baker said such high levels of smoking contribute to terrible physical health outcomes, described in 2012 by the National Mental Health Commission as “a national disgrace“.

Latest figures show that 50 per cent of deaths in people with mental health or substance use disorder are due to tobacco-related cancer, cardiovascular disease, and respiratory conditions.

They have a reduced life expectancy of 10-15 years compared to the general population, and very low quality of life in the last ten years of life, she said.

“We’ve got no excuse now, the evidence is there (that quit programs work),” she said. “People might not want to quit immediately… or in the next 30 days, but they’ll be wanting to quit somewhere along the line, and we can help them prepare for that.”

Conference oorganisers intend to produce a mental health statement from the conference in coming weeks. Croakey will update this post when it is published.

Watch this interview with Jane Galea-Singer

Galea-Singer is from the Auckland District Health Board and talks about her work as a Smokefree Co-ordinator for Mental Health and Addictions services. She presented to the conference on the “Let’s Kick Butt” mass quit challenge. 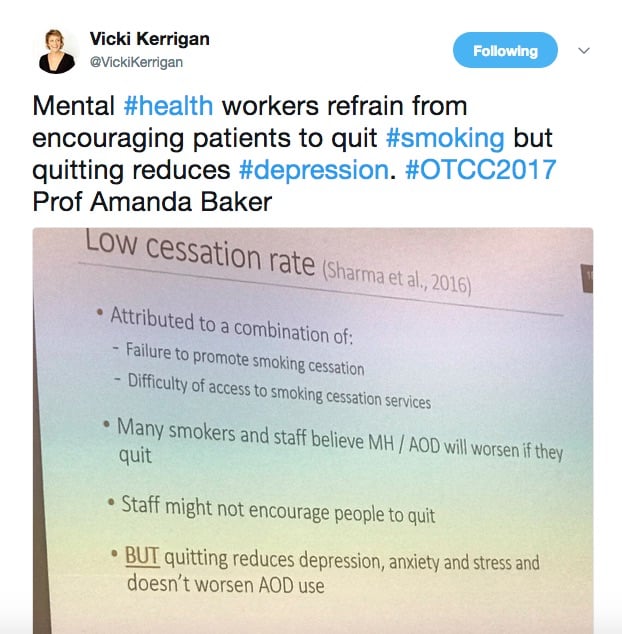 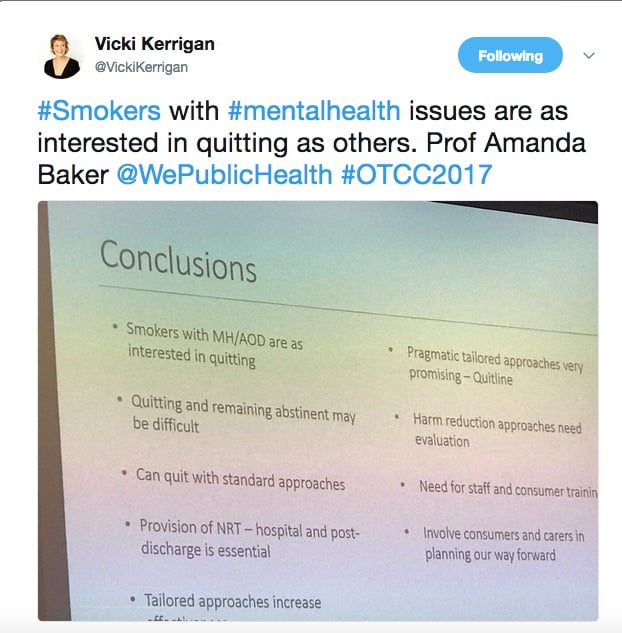 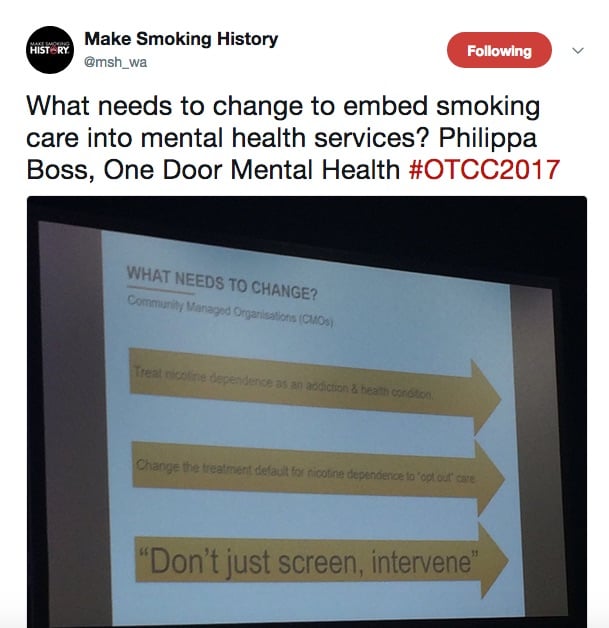 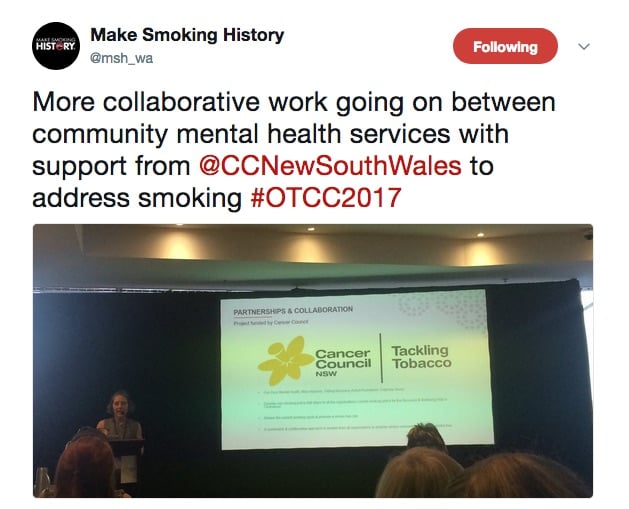 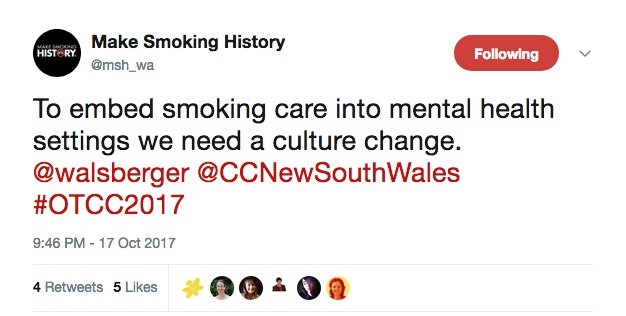