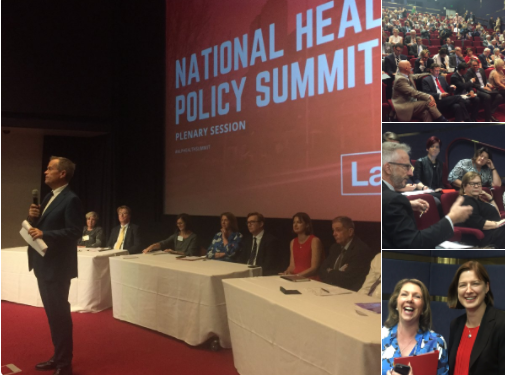 On the weekend, Croakey reported on Labor’s national health policy summit, and published a number of interviews with health experts engaged in the discussions.

In the post below, former National Rural Health Alliance CEO Gordon Gregory reflects on those reports and interviews and warns that health advocacy is often too focused “on matters that are related to organisational principles, strategy, governance and (frankly) motherhood”.

He suggests there are four classes of issues on which health advocates can work, and they should not get equal time in meetings with the Minister of the day.

On Friday, 3 March, the Australian Labor Party held a National Health Policy Summit in Canberra. Thanks to the endeavours of Croakey, and in particular to Marie McInerney, we were able to hear the views of some of the 150 experts there through Twitter, Periscope and Marie’s videoed online interviews.

This is not a piece about the relative value or effectiveness of the health policies of Government and Opposition. It concerns the difficulty health advocates seem continually to have in framing and agreeing proposals of the sort which might be adopted by the Government of the day or included by the Opposition of the day in its health policy platform for a coming election.

Everyone knows that advocacy should focus on answers, not problems. For the most part, politicians do not need to be reminded of what the issues are. But certain types of ‘answer’ are much more likely than others to be practicable and to improve health outcomes in the short term.

In meetings of health advocates, too much time is often spent on matters that are related to organisational principles, strategy, governance and (frankly) motherhood.

With the best will in the world, a Health Minister and their Department cannot operationalise generic principles. Nor are they what will really matter in an Opposition’s policy platform.

We can do much better.

Where the National Health Policy Summit was concerned, I read in Croakey that “there were benefits in having a big crowd of people committed to improving health in the same room, sharing an agenda with people outside their own ‘silos’ and reiterating key issues and messages with politicians and advisors that they often don’t get to reach”.

But how much more useful might it have been if there had been more focus on new policy proposals for this year’s and next year’s budget, and less on principles and strategic approaches!

This (untested!) observation led me to speculate about the type of initiatives on which health advocates currently spend their time, and what a more desirable mix would be.

Best use of an hour with the Health Minister

It is my belief that there are four classes of issue on which health advocates can work. They can be described as:

Such a classification could be applied to policies and programs which affect health but which are not within the health sector itself. That, then, would see it applied to the social determinants of health, including not just health risk factors but also, for example, proposals about taxation. However, for the purposes of this piece, I have restricted the analysis to matters that lie wholly or largely within the health sector and thus within the purview of Health Ministers and their Departments.

Table: Best use of an advocate’s one hour with the Minister of the day

In the first class are what might be called strategic or organisational approaches to health. including such things as:

When lobbying politicians or engaging with the media, health advocates should, for two reasons, allocate very little time to such matters. For one thing, there is precious little disagreement, in Australia or anywhere else, about their importance. For another, such matters can and do inform ongoing political decisions but are not the stuff of short-term change or new policy proposals.

The second class of issue consists of strategies or plans (probably national) which are not currently in place but which, if adopted by government, would be the frame within which specific programs would operate and on which new health budget allocations would be made.

Different advocates will have different views on such potential new plans or program frameworks; some will argue that a particular plan should not be introduced.

This class includes such things as:

Proposals for the redistribution of existing program expenditures

The third class comprises proposals relating to existing policies or programs, suggesting ways in which the effectiveness of expenditures already on budget could be improved. This would include, for example, suggestions about how existing mental health programs should be altered, extended or terminated; or revised regulations to be applied to incentives for general practitioners who work in rural and remote areas.

Such proposals would legitimise the redirection of funding or even the termination of particular health expenditures. Such changes are of great interest to governments, particularly in fiscally-challenging times when any new program expenditures must be offset by savings from within the portfolio.

This class would include things such as:

These are potential new programs which are justified on the basis of evidence about particular aspects of health service need, and about the efficacy of particular approaches to its management and/or treatment.

Such programs are in effect ‘shovel-ready’, with the evidence collected and the case made – in all probability by one or more advocacy body with a vested interest in the plan (not necessarily to support it). With the evidence in, there will in effect be a contest of ideas between them all, with the question of which are adopted by government answered through normal political processes.

There is a place for general principles and approaches in what might be regarded as the Foreword to a set of programs for improving health outcomes on the ground. But for the most part there is only furious agreement about these principles, and what really matters are specific new policy proposals.

We have to get over the situation in which, in a room of 150 health experts, each one feels a sense of duty towards their own job or profession – as if they are in attendance with a representational duty.

What this means is that it will be easy for them to agree with others about the importance of, for example, continuity of care, but much harder to agree that scarce health dollars should be spent on anything but their own interest. When advocates for each special interest area bring their Number 1 proposal to the table, a contest of specific ideas can take place. Evidence will be scrutinised, assumptions challenged.

And at the end of the day there will hopefully be sufficient collegiality in the sector as a whole for the most effective proposals to be unanimously supported.

Croakey is very grateful to the supporters who backed our #HealthMatters fundraising campaign so we could report in detail on the summit. Follow the coverage at this link.

We thank them all for their generous support.

We will update this post with full details of our fundraising for #HealthMatters when the project is finalised.