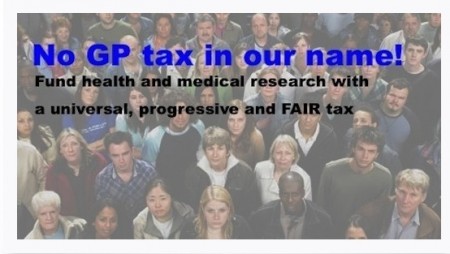 The Government’s plans for a new medical research fund are coming under widespread attack, from the consumer health lobby, and even from within its own ranks.

Liberal backbencher Dr Dennis Jensen has criticised the absence of a coherent science policy, and questioned the plan for a medical research fund when cuts are being made to other science areas (interestingly, less widely reported has been his rejection of climate science.)

With concerns raised about the ethics involved, more than 1,000 people have signed a petition from health and medical researchers protesting Government plans to use GP copayments to fund a new medical research fund.

“The idea of taxing people who go to the GP and then holding them to ransom by saying the GP tax will be used to fund medical research is unethical. Our society is diminished when an unfair burden falls on patients to fund research.”

The plan’s lack of logic has also been highlighted.

Meanwhile, Professor Mike Daube, professor of health policy at Curtin University, suggests it would be better to fund the initiative via a modest increase in tobacco tax and abolition of the Wine Equalisation Tax (WET), which discriminates in favour of cheap wine.

He writes at The Conversation that this would be “a win-win-win-win-win” – by funding more health and medical research; improving community health; bringing added benefits to disadvantaged groups; winning support from health groups; and not causing public pain.

But perhaps the Government’s announcement of the Fund is also acting as something of a Trojan Horse?

A question raised in the article below by Opposition health spokeswoman Catherine King is whether the fund is part of a long-term goal to phase out the NHMRC.

Labor supports additional funding for health and medical research.  We showed this support in government and will continue to in opposition, but Australia shouldn’t fund the search for the cures of tomorrow by imposing a tax on the patients of today.

This government’s first budget says almost as much about Australia’s history as it does about what Australia’s future looks like with Tony Abbott as Prime Minister.

In 1992 Abbott was one of the principal architects of Fightback!.  It argued that over servicing by doctors was ‘widespread’ and called for restrictions on bulk billing, but maintained bulk billing for pensioners and health care cardholders.

Abbott’s first budget goes much further in cutting health funding and reshaping the system than Fightback! ever suggested.  Pensioners and health care cardholders are not exempt from Abbott’s destruction of Medicare, rather they will be amongst the worst hit.

Indeed, last week the former President of the Australian Medical Association said of Tony Abbott’s GP Tax, “it’s very disappointing. I mean, this affects every single person…the reality is it’ll (the money) come from patients and it’ll hurt the people who are most price sensitive and they’re the people who have got the least money.”

Australians should not be asked to sacrifice universal health care in order to fund medical research – it is a false choice, it’s deceitful and it’s unfair.

Of course Australia should be at the forefront of health and medical research, and like all Australians, I hope we do find a cure for cancer, dementia and Alzheimer’s Disease and I hope we find it quickly, but it shouldn’t be at the cost of a deteriorating quality of care, higher out of pocket health costs and a lower life expectancy.

But even if all the government’s cuts were to pass parliament – which seems unlikely – it would pay less than $20 million in additional research funding at a cost of billions of dollars in health cuts.

You cannot on the one hand cut $50 billion from Australia’s public hospitals and on the other say it ‘might’ mean Australia finds a cure for cancer.  Australians need good healthcare now as well as into the future.

After the Prime Minister’s massive breach of faith in last week’s budget, the Australian public is right to be sceptical about his long-term intentions for this fund.

There is no mechanism to guarantee that the current pool of National Health and Medical Research Council funds will not decline, with the proposed Medical Research Future Fund simply replacing it over time.  Such an action would be entirely consistent with Tony Abbott’s views on outsourcing the funding and delivery of healthcare.

These are issues the Labor opposition will be pursuing at Senate Estimates, because researchers have a right to know what the government’s plans for this fund are.  So far the details have been scant.

If Tony Abbott were serious about adequately funding health and medical research, he’d know that slashing the budget of the Australian Research Council and CSIRO is no way to do it.

Research experts have told him time and time again that new discoveries in medical research do not happen in isolation: they need other areas of science to thrive.  Anyone who has had a knee replacement or heart surgery has enjoyed better outcomes because of advances in the materials used to manufacture artificial joints and stents – a direct result of physics.

There are a number of questions to be worked through regarding how this fund might operate.  Labor will continue to support health and medical research, but not at Medicare’s expense.