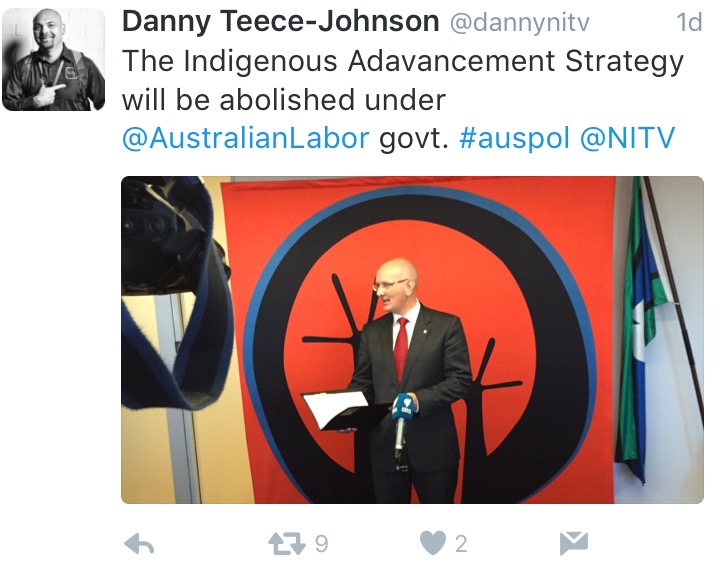 Following last week’s launch of the Redfern Statement, Labor’s shadow minister for Indigenous affairs, Shayne Neumann, was at the Redfern headquarters of the National Congress of Australia’s First Peoples (Congress) on Thursday to respond to the statement and introduce some of the policies his party will introduce if elected.

The Redfern Statement, covered in full by Croakey here, is the result of an historic collaboration between 16 Aboriginal and Torres Strait Islander peak organisations, supported by many more health groups and NGOs, to produce a call for Government action to produce policies that will “meaningfully address Aboriginal and Torres Strait Islander disadvantage”, in the lead-up to the election.

Neumann indicated that the policy announcements were Labor’s direct response to the Redfern Statement, and that he “acknowledged and welcomed” the statement as, “a declaration of powerful and uncomfortable truths, that reflects upon our past and informs our future as a truly reconciled nation”. 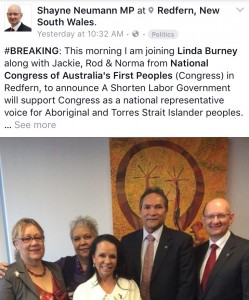 The highlights of his speech were:

A recommitment from Labor to close the gap on Indigenous disadvantage, and progress genuine reconciliation via equal, engaged and empowered partnership with Aboriginal and Torres Strait Islander peoples.

A pledge to restore the funding for Congress (which was defunded in the 2014 budget) with an infusion of $15 million over the next three years.

An acknowledgement that the policies being launched were informed by the hard work of many Aboriginal and Torres Strait Islander individuals, communities and organisations, including those represented in the room.

Those present at the event received a printed draft copy of Labor’s suite of policies however the final version is not yet available online.  A spokesperson for Shayne Neumann told Croakey it would be so ‘in the coming days”.

Other areas with specific new programs or investments include: 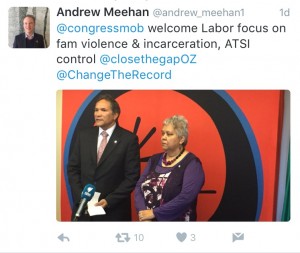 The Secretariat National Aboriginal and Islander Child Care (SNAICC) responded with a statement welcoming the pledge of $57 million “to support the expansion of places and the delivery of a range of holistic services for Aboriginal and Torres Strait Islander children and families.” and said the policies signalled “a significant, more inclusive approach to genuine partnerships with Aboriginal leadership, services and peoples”.

ANTaR – national advocacy organisation for Aboriginal and Torres Strait Islander rights National Director, Andrew Meehan, said it was “pleasing” that Labor had acknowledged the Redfern Statement, releasing its policy platform, and “committing to reset a relationship based on engagement”.

“This election is a time to look at priorities and recommit to closing the gap. Addressing health equity issues and the broad range of social determinants of health for Aboriginal and Torres Strait Islanders needs collaborative efforts from all levels of Government.”

Undoubtedly all those involved with the Redfern Statement would agree that the issues they have outlined need to be firmly on the agenda no matter who is in government come July 3. Labor has set the benchmark by directly responding, and by committing to meaningful partnership, with funding.  We now await the responses of the other parties. As SNAICC Chairperson, Sharron Williams concluded,

“These announcements break the silence on political directions for Aboriginal and Torres Strait Islander issues in this election campaign. We welcome the opportunity for respectful dialogue as equals with all major parties, and Labor’s recognition of the importance of representative bodies and community-controlled services in meeting the needs of our people.”

In a separate Labor policy announcement on Thursday, Shadow assistant treasurer Andrew Leigh said his party, if in Government, would establish a fine enforcement collection scheme that would allow the states and territories to use the tax and social security system to recover unpaid fines.

While welcoming the renewed discussion on reducing imprisonment for fine default, Change The Record (CTR) Coalition co-chairs, Antoinette Braybrook and Shane Duffy said there were significant concerns with the use of the social security system to enforce fine payment by Aboriginal and Torres Strait Islander people, who may already be socioeconomically vulnerable. They recommended that all political parties consult with Aboriginal and Torres Strait Islander community controlled organisations and the legal sector, to ensure unanticipated negative consequences of fine default policies are avoided, pointing to the effective use of Work and Development Order schemes, in NSW as an alternative to fine recovery schemes.

“We stand ready to work in partnership with government to develop appropriate and effective reform options” said Shane Duffy.

Is it too much to hope that we are finally seeing the politics of listening, learning, responding, and including in policy that impacts on Aboriginal and Torres Strait Islander people? If not, let’s also hope we see politicians from all parties vying for a slot to respond to the Redfern Statement very soon.

With thanks to Summer May Finlay for her notes on Shayne Neumann’s speech on Thursday 16 June. Croakey will post links to the full text of the speech, and the policy statement, when they are available online.

PrevPreviousWhose suffering should count in the assisted dying debate?
NextLabor runs hard on health and “the Medicare election” – wrapping the policies and reactionNext