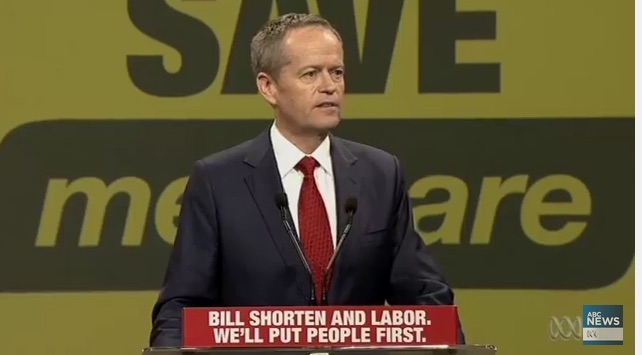 Mental health, suicide prevention, and the framing of this election as “a referendum on Medicare” were among the health highlights of Opposition leader Bill Shorten’s speech at the official Labor campaign launch in Sydney today.

Shorten pledged $72 million for 12 regional suicide prevention projects, to “unfreeze” Medicare rebates and reverse cuts to bulk billing incentives for diagnostic imaging and pathology, and sought to position Medicare as the defining issue of the election campaign.

Many important social determinants of health also were spotlighted, including fair funding for public education, support for TAFE and apprenticeships, equality for women and the need for action on family violence. Shorten also pledged to make marriage equality a reality within the first 100 days of his Government.

He put little emphasis on climate change – I counted only two passing mentions. This seems particularly surprising given that Shorten sought to position this election as a vote for where Australia should be aspiring for in 2030. By that time, it is likely that many more Australians will be extremely cross about the state of climate action circa 2013-2016.

Meanwhile, Labor also announced a series of public health initiatives this weekend, totalling $300 million over four years, with commitments of: 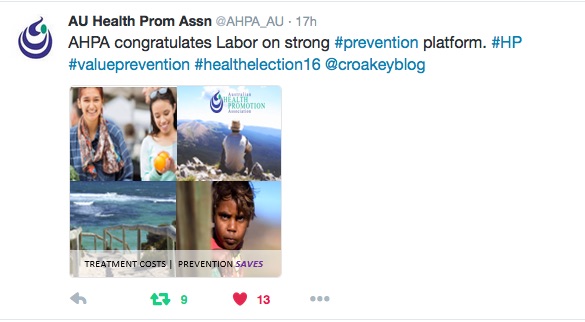 While health groups warmly welcomed the announcements (see statements below), it was surprising Labor did not focus more explicitly on addressing the role of structural inequality and social and economic disadvantage in driving health inequalities and chronic diseases.

It’s strange, not only because the evidence suggests this would be sensible, but it also seems a missed political opportunity, given that the Shorten Opposition has been positioning itself as the champion of “a fair go”.

See this assessment of the public health announcements by Professor Sharon Friel, of the ANU.

Meanwhile, it also seems quite extraordinary that Labor would put forward public health policies without specifically addressing climate change. Healthy communities will need to be resilient and adaptive in the face of a changing climate. Again, this seems a glaring lapse from both policy and political perspectives. 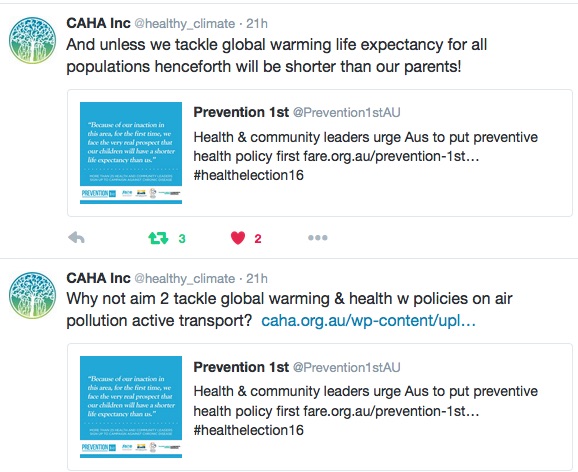 Big tick from The Australian Healthcare and Hospitals Association

The ALP’s announcement that it will reverse cuts to bulk billing incentives for diagnostic imaging and pathology is a positive measure which will ensure patients can continue to access essential tests without being confronted with high out-of-pocket costs, says Alison Verhoeven, Chief Executive of the AHHA.

When the cuts to bulk billing incentives were announced in the 2015-16 Mid-Year Economic and Fiscal Outlook measures by the Turnbull Government, the private pathology and diagnostic imaging sectors made it clear that it would be patients who would bear the pain of increased costs.

This had the potential to result in many people putting off tests they need but can’t afford (with potentially worse health outcomes and greater costs for the health system), and more people seeking these tests through the already financially challenged public system.

Subsequent deals made in the past few weeks between the Health Minister and private sector pathology and diagnostic imaging providers will do little to ensure patients continue to receive affordable care, although they have appeased business owners.

“More than 20 million diagnostic imaging procedures are performed each year in Australia, to diagnose and manage conditions ranging from bone fractures to cancer, stroke and heart disease. It’s important that the health sector ensures referrals for these services are warranted, and it’s equally important that these services remain affordable and accessible to all people who need them, not just those who can afford to pay out-of-pocket costs,” says Ms Verhoeven.

“Investments proposed this weekend by the ALP in community-based preventive health are a valuable measure, guided by strategy and underpinned by evidence.”

And a big tick from the Consumers Health Forum

Labor’s promise to retain the bulk billing incentive for pathology and diagnostic imaging will reduce the risk of patients foregoing vital tests and scans because they can’t afford them, the Consumers Health Forum said today.

“Labor’s health policy is protecting a central principle of Medicare — that is universal access to medical attention based on need rather than ability to pay,” the CEO of the Consumers Health Forum, Leanne Wells said.

“As it is now, five per cent, or more than one million Australians, delay or don’t see a GP because of cost, ABS figures show.  An even higher proportion of people, eight per cent, cite cost as a barrier to seeing a specialist.

“We support measures that reduce out of pocket bills and take away cost barriers to people seeking appropriate and timely treatment care.

“It should not be forgotten that, on the whole, people are referred for pathology and radiology by doctors for good reason.  To allow cost to become a barrier to tests and scans strikes at the heart of Medicare.

“It is well past time that we as a nation took concerted action to turn around the unhealthy way of life that puts so many children and adults on the path to obesity and ill-health,” said Leanne Wells.

“Labor’s five-point plan to implement measures like the focus on 50 communities at high risk of chronic disease, and national plans for healthy nutrition and physical activity, raise hopes for real leadership on this the most important health challenge facing Australia.

“It is a national shame that Australia scores 94th on an international physical activity index and that nearly one in four children is overweight.

“We particularly welcome the Healthy Communities Initiative. It takes a place-based approach that will enable communities and consumers to tailor localised strategies for better health that address the social determinants associated with poor health.

“What we need is a commitment to a long term direction. In the past, well-meaning measures have faltered because of the lack of a credible, enduring national drive necessary to convince consumers of the benefits of healthy lifestyle.

The announcement has been welcomed by Prevention 1st, a preventive health alliance led by the Foundation for Alcohol Research and Education (FARE), the Public Health Association of Australia (PHAA), Consumer Health Forum of Australia and Alzheimer’s Australia, that has been calling on all political parties to commit to efforts to reduce chronic disease ahead of the July election.

The announcement follows the Labor Party’s commitment to Fetal Alcohol Spectrum Disorders, stroke and dementia announced over the past week and equates to an investment in health of more than $350 million.

Alzheimer’s Australia’s Chief Executive Carol Bennett congratulated the Labor Party for resuscitating its commitment to preventive health and building on the work of the Preventative Health Taskforce.

“I commend the Labor Party for acknowledging the importance of preventive health. We know that investing today secures the health of our children and of future generations, but will save lives,” Ms Bennett said.

At least 31 per cent of the disease burden can be prevented if governments would target five modifiable risk factors; tobacco use (9%), high body mass (5.5%), alcohol use (5.1%), physical inactivity (5%) and high blood pressure (4.9%).

Mr Thorn says it is now up to the Coalition to indicate how it intends responding to Australia’s greatest health challenge, for tackling chronic disease in Australia.

And a tick from the Public Health Association of Australia

“This policy will have a major impact in reducing chronic diseases which are the leading cause of illness, disability and death in Australia. Labor has listened and is implementing a policy which shows a real understanding that prevention must be a top priority for our health system,” said Professor Yeatman.

“Investing significant funds and resources into nutrition, physical activity, tobacco and alcohol will have a major impact on reducing chronic disease in the community. Labor is demonstrating the national leadership and commitment that is required to secure Australia’s future health.

“We especially welcome Labor’s ‘Healthy Communities’ plan to target communities who need most support to achieve the health opportunities that others take for granted,” said Professor Yeatman.

“PHAA also welcomes the $20 million investment to revive the successful National Tobacco Campaign together with additional action to target vulnerable groups including Aboriginal and Torres Strait Islander people, people with poor mental health and people living in rural and remote areas. These investments are a vital step to closing the life expectancy gap in Aboriginal and Torres Strait Islander communities,” said Professor Yeatman.

“PHAA looks forward to a similar commitment from other parties. Today, Senator Nick Xenophon commented to the Sydney Morning Herald his list of demands with his fourth demand to change the emphasis on health care towards more preventative measures,” said Professor Yeatman.

“Prevention is key to improving the lives of all Australians and policies such as these will bring enormous benefits to Australia’s health,” concluded Professor Yeatman.

The preventive health policy announced today by Shadow Health Minister Catherine King has been welcomed by the Heart Foundation as a significant contribution that, if implemented, would help reduce death and suffering from heart disease and reduce pressure on our hard pressed health system.

“The Heart Foundation has been urging all major parties to develop a national physical activity action plan,” Mr Shilton said.

“Some 57% of adults don’t meet the physical activity guidelines. With children it’s even worse at 80%.  But if we all walked for 30 to 60 minutes most days a week, heart disease would drop by 35%, there’d be 20% fewer cases of breast and colon cancer, 40% less diabetes and 30 less depression.”

“The lack of an Australian plan has been a huge gap in our approach to disease prevention. Physical inactivity is a grossly under-rated risk factor of heart disease that is estimated to cause 14,000 deaths a year.”

The announcement has followed other recent commitments from political parties that address physical inactivity, including the Coalition’s pledge to provide an extra $60m for the Sporting Schools program, Labor commitment to an ‘active ageing fund’ and an extra $21m to the ABC to provide greater coverage of women’s sport; and the Greens $250m plan for cycling and walking infrastructure.

“Far too many Australians lead sedentary lives, with eight out of 10 children not meeting the physical activity guidelines of 60 minutes a day and two in three Australians aged 15 and over sedentary or have low levels of exercise,” Mr Shilton said

[divide style=”dots” width=”medium”]
Meanwhile, just a reminder of other critical health concerns raised this weekend (if not at the #LaborLaunch). 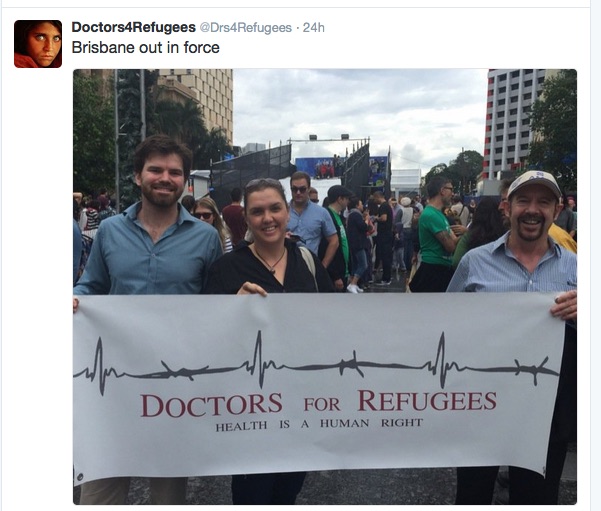 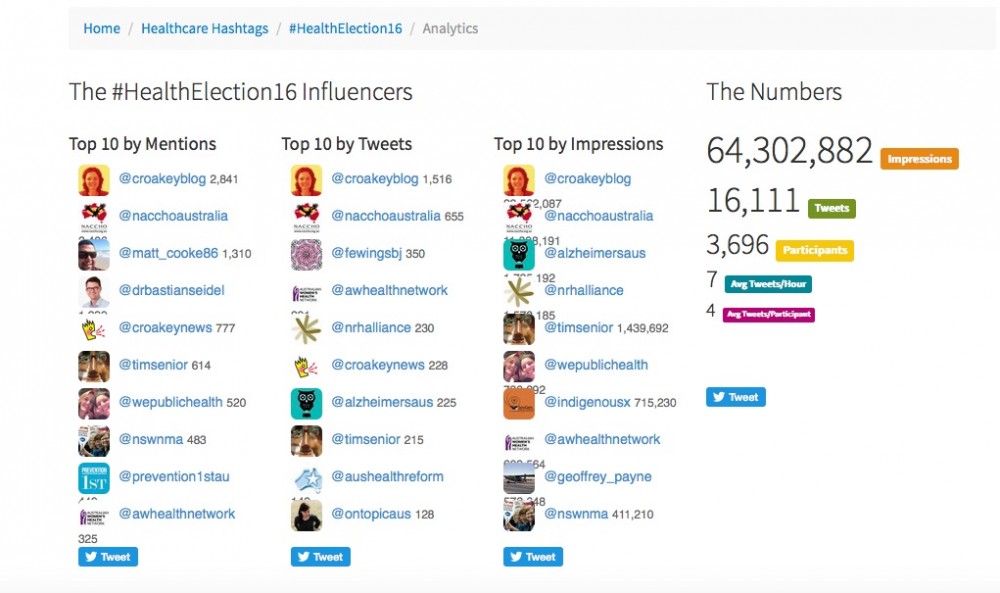