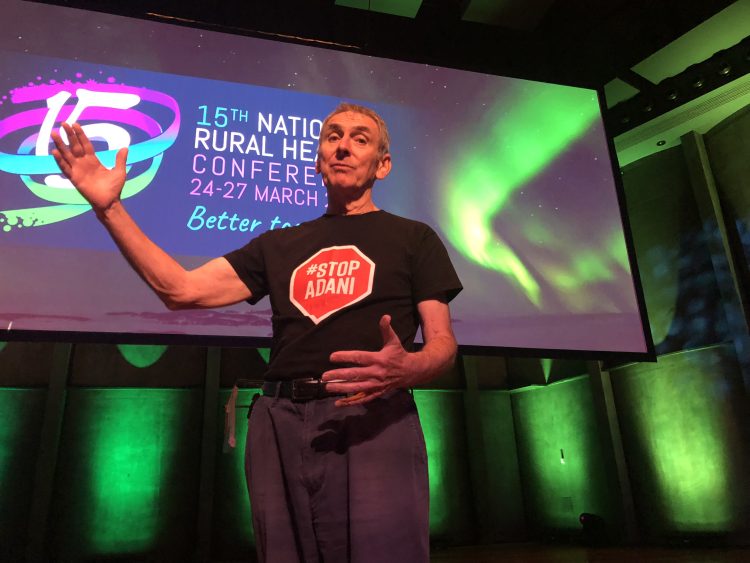 Labor has re-committed to implementing a national strategy on climate change and health, following concerns raised yesterday by leading health experts about the omission of this strategy from its new climate change action plan.

A spokeswoman for the Shadow Minister for Climate Change and Energy, Mark Butler, told Croakey this morning the health sector’s concerns would be addressed. “We’ve definitely got that message,” she said.

A senior public health expert yesterday told Croakey that it was “disappointing” Labor’s new climate action plan did not include an explicit focus on a national climate and health strategy, although the Opposition had previously committed to it.

Professor Peter Sainsbury, who last week delivered a rousing address on climate change to the National Rural Health Conference, also said he was disappointed Labor had ruled out a carbon price, which “was like trying to tackle emissions with one hand tied behind your back”.

Meanwhile, Doctors for the Environment Australia also noted the lack of a health focus in their response to the policy.

Asked for comment, Shadow Health Minister Catherine King, who in June 2017 pledged that a Labor Government would implement a national strategy on climate, health and well-being, told Croakey:

We announced the climate change and health strategy over a year ago. No reason it wasn’t included today other than that we have already announced it. It is also included in our National Platform released in December.”

King also tweeted in response to concerns raised by others in the sector. 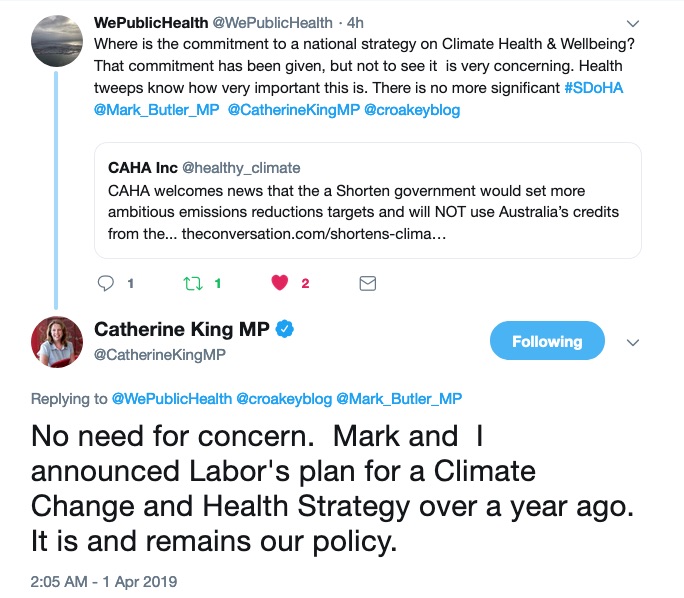 This morning Butler and King issued a joint statement re-committing to the strategy, as per this tweet.

However, Labor’s policy issued yesterday presents as a missed opportunity to champion the health benefits of climate change action, with scant reference to the health impacts, and no mention of the role of health services in either mitigation or adaptation.

Sainsbury, a former chair of the Climate and Health Alliance and past president of the Public Health Association of Australia, told rural health leaders in nipaluna/Hobart last week that health services have “an immense role” to play in addressing climate change, not least because of their significant contribution to carbon emissions.

“We’re killing people with what we are doing in our health services,” he told delegates. “We are creating the change that is killing people.” 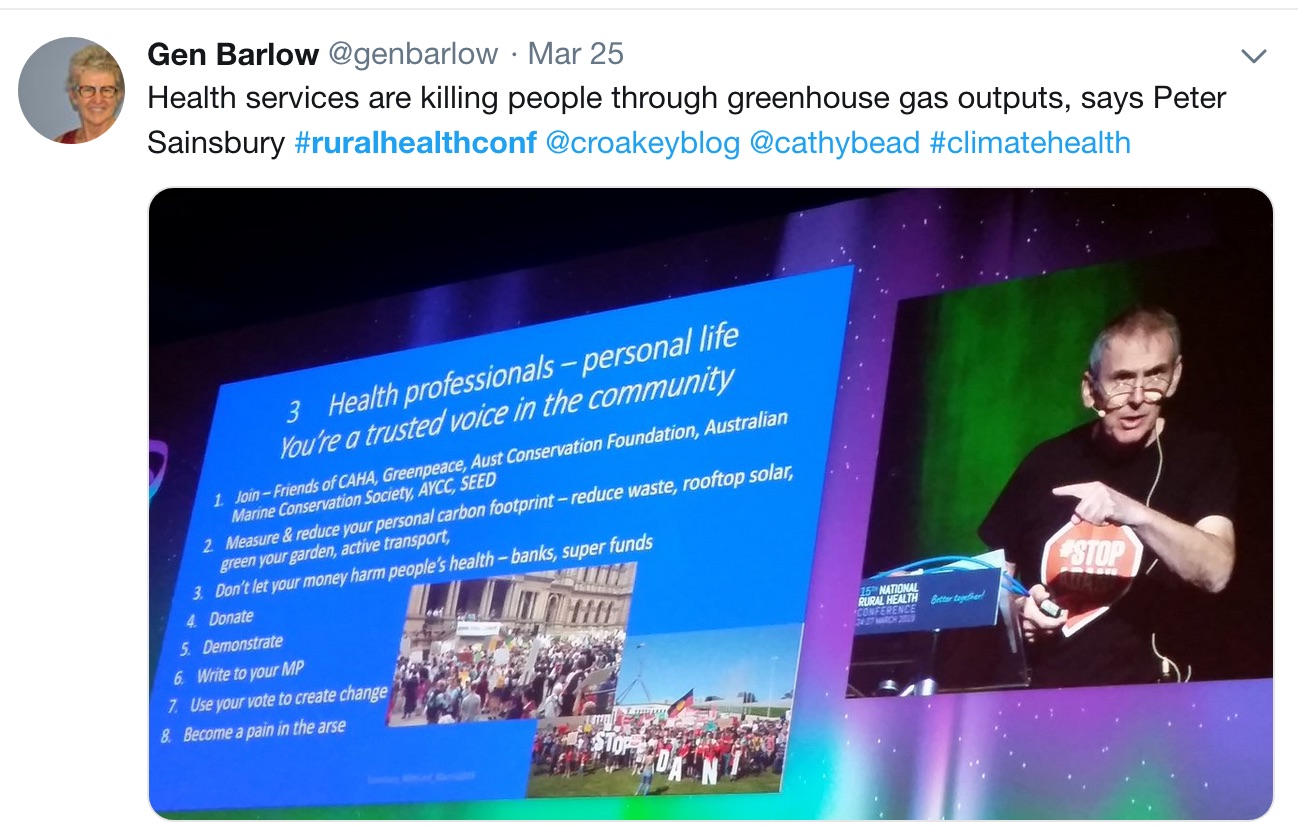 Citing research showing that healthcare contributes to seven percent of Australia’s greenhouse gas emissions, Sainsbury said most of these emissions were caused by healthcare interventions, particularly medications, whose production, packaging and distribution was “immensely carbon intensive”.

However, the contribution of the health sector to carbon emissions was not well understood by the general community or even by health services and health professionals, he said.

Sainsbury called on the Australian Commission on Safety and Quality in Health Care to incorporate climate change considerations into national standards and accreditation processes for health services.

“It’s not just about reducing carbon emissions and the rest of the environmental footprint, it’s also about getting better prepared for the effects of climate change on health and health services,” he told Croakey in an interview after his keynote presentation.

“They should be looking at writing standards that will be included in accreditation processes around climate mitigation and adaptation.”

While there were small pockets of dedicated people in the health sector attempting to drive climate action, they often did not receive much support from their health service or managers, he said.

“And what’s really lacking is leadership from departments of health and states and territories and federal governments,” he said.

However, Sainsbury hailed movements such as Choosing Wisely, which seeks to tackle unnecessary use of tests and treatments, as important for climate action.

He urged health professionals to consider environmental sustainability in all clinical decision making, and to question their use of tests and treatments.

Wearing a “Stop Adani” T-shirt, Sainsbury urged conference delegates against supporting banks or super funds that invest in fossil fuels, and encouraged them to vote for politicians who did not support new coal mines.

“Don’t let your money kill people,” he said. “If you’ve got your money in a bank or super that invests in fossil fuels, your super is killing people.”

He urged health professionals to engage in direct advocacy within their organisations, and with MPs and the general public, encouraging them to become “a pain in the arse” and “a pain in the neck”.

They should also talk to their patients about climate change, he said.

“You talk about smoking or their blood pressure or their diet or domestic violence, all of which are important for health. Why wouldn’t you talk about climate change, and what they can do to try improve their health and the health of their children and grandchildren?”

The message I want you to take away today is that all of this is affecting your communities and that there is a role for you in trying to turn it all around. 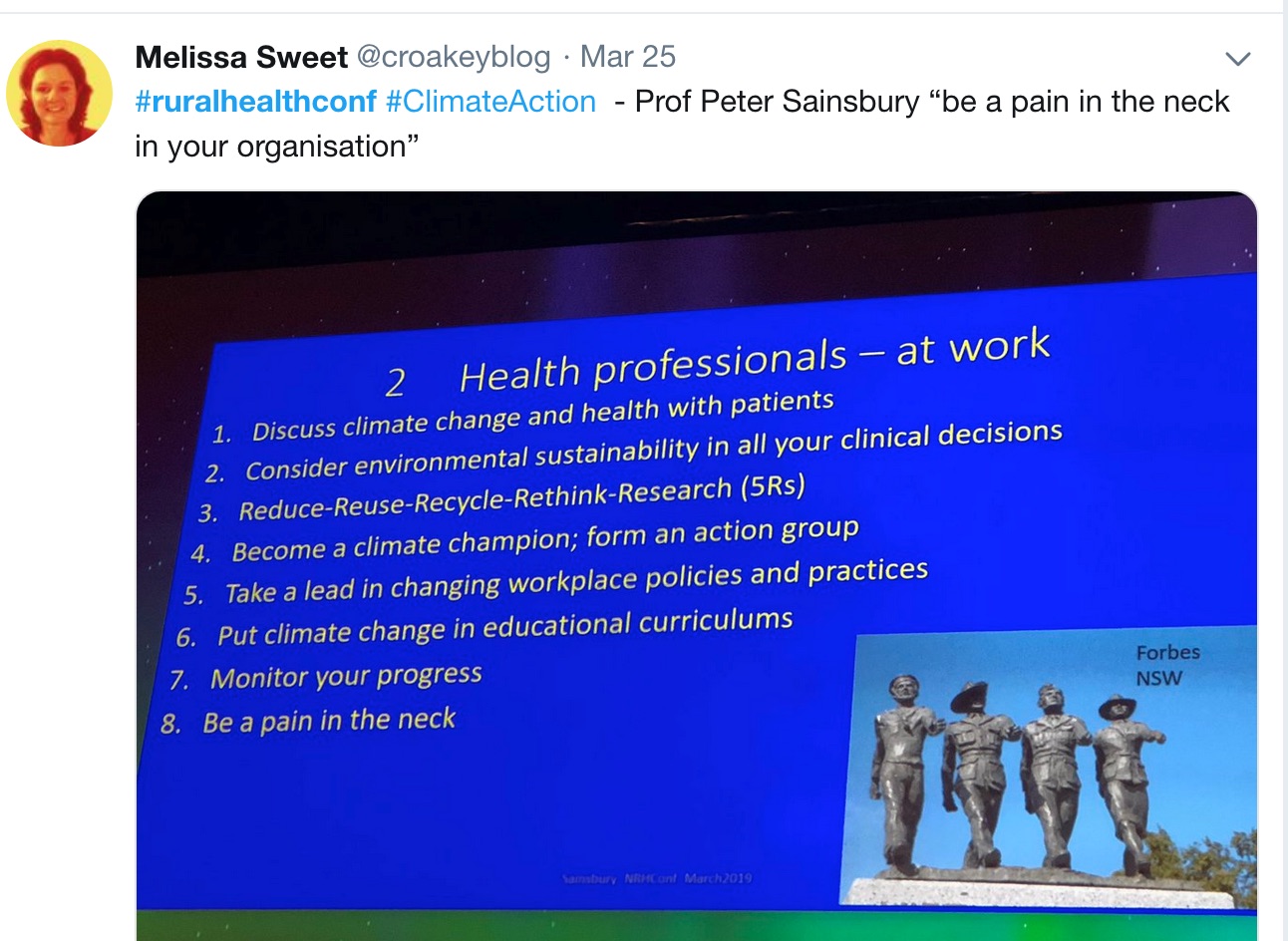 Sainsbury also stressed the co-benefits for health of climate action. Reducing carbon emissions through increased use of walking and public transport would bring other health benefits, while putting solar panels on health services would save money.

There would be “co-benefits galore from doing the right thing,” he said.

Sainsbury stressed to conference delegates that climate change should be understood as a social determinant of health because it was created by societal decisions. “We’ve created these social problems and we potentially can correct them. That’s really important.”

He warned that climate change was an existential threat to the human species, and that one degree in global warming was already bringing devastating effects, while a two degree temperature rise was probably inevitable.

Watch his presentation at #ruralhealthconf 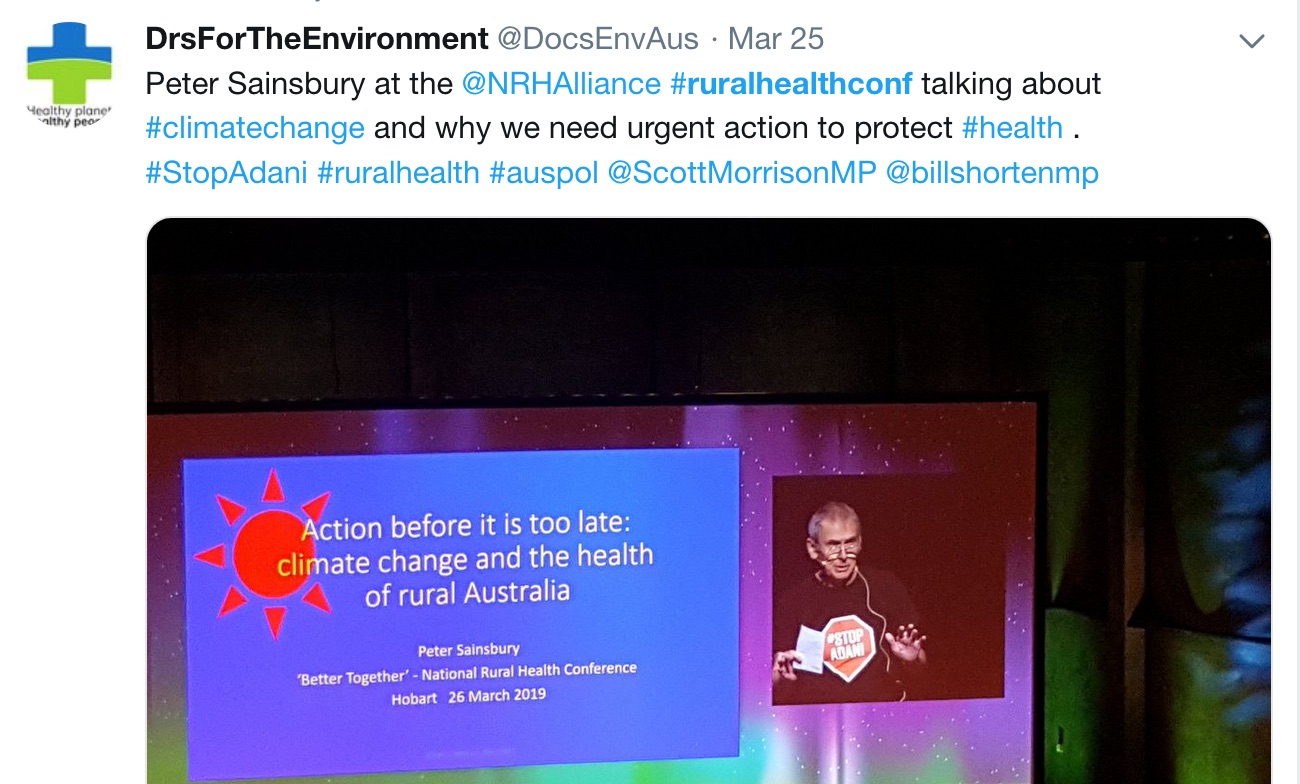 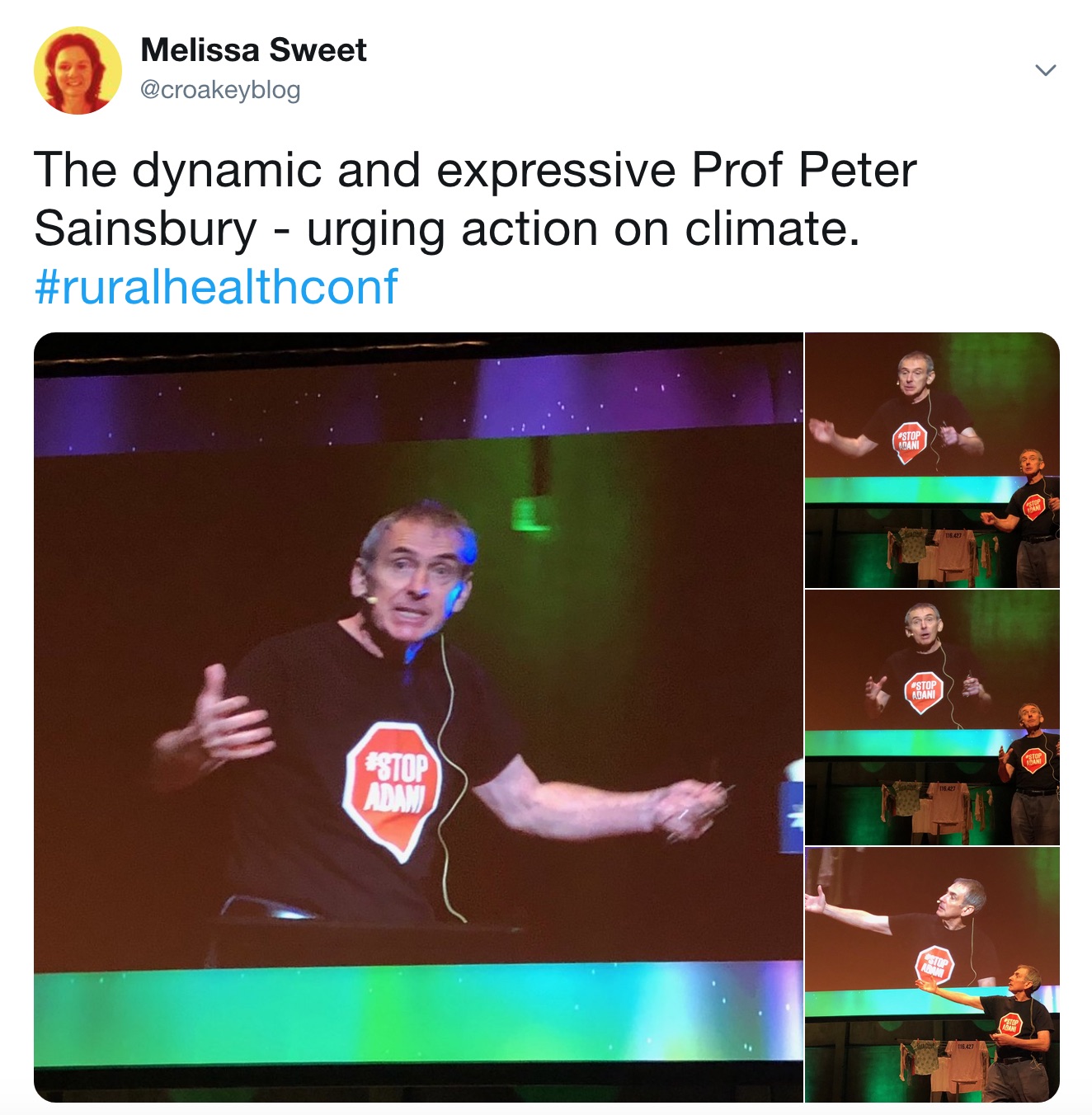 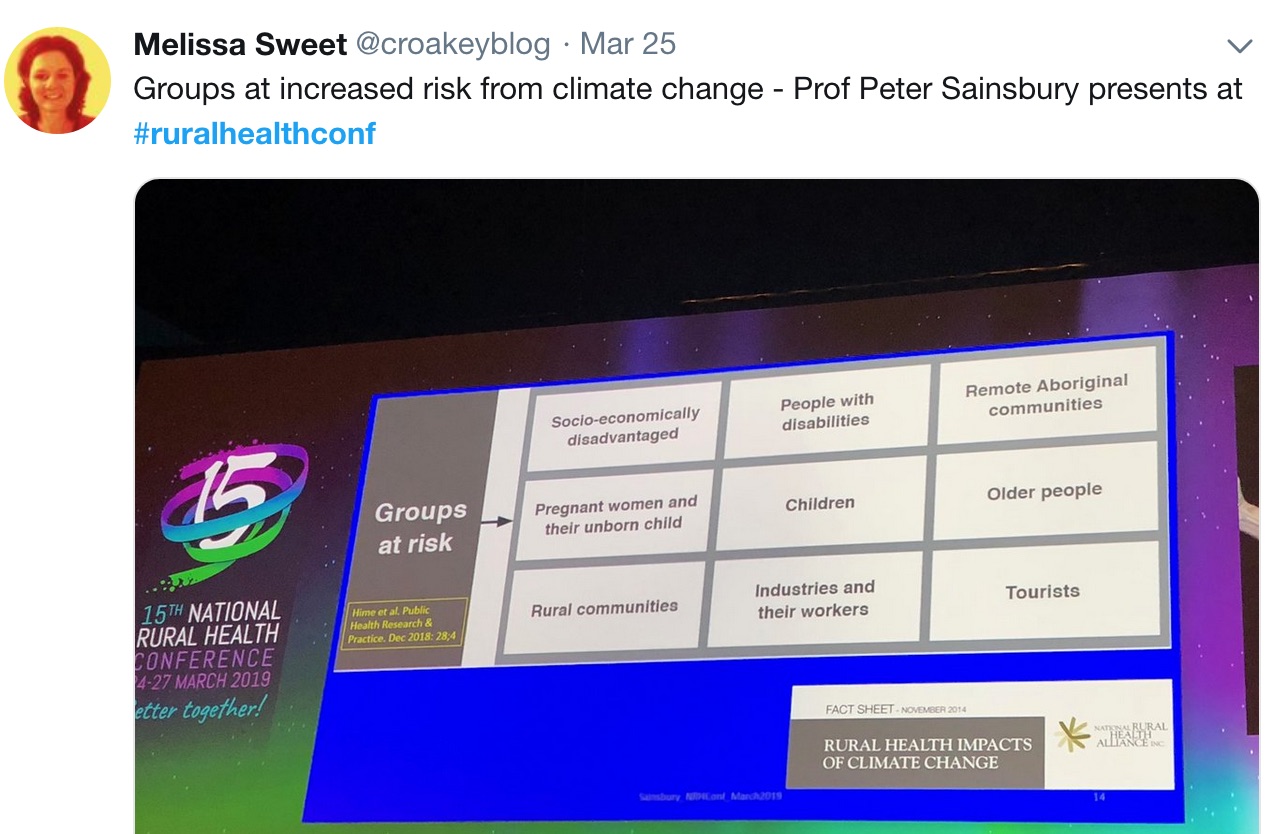 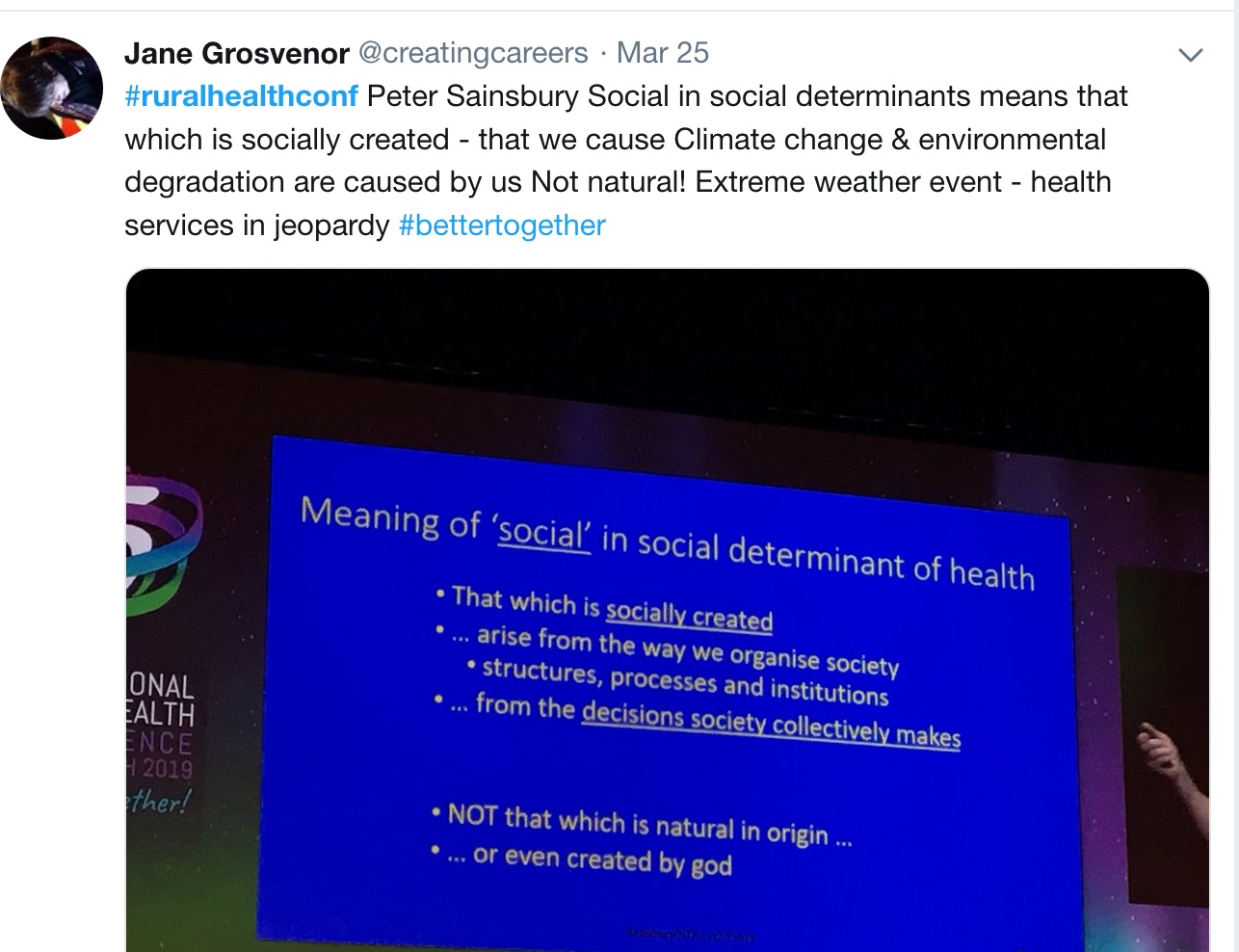 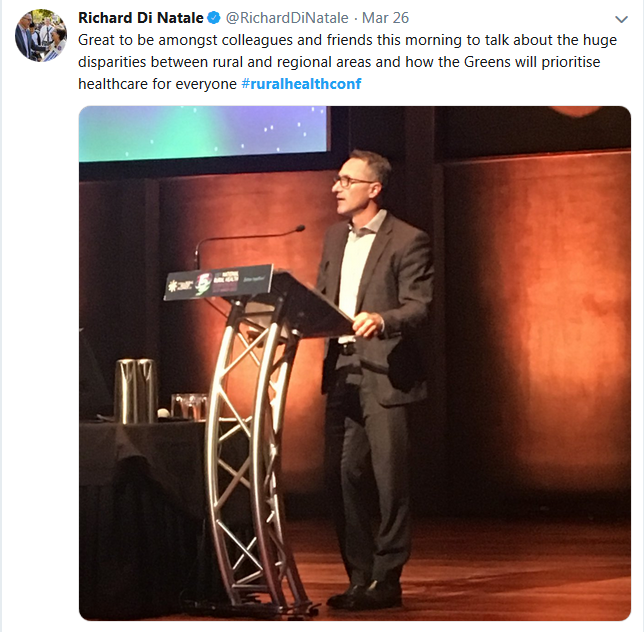 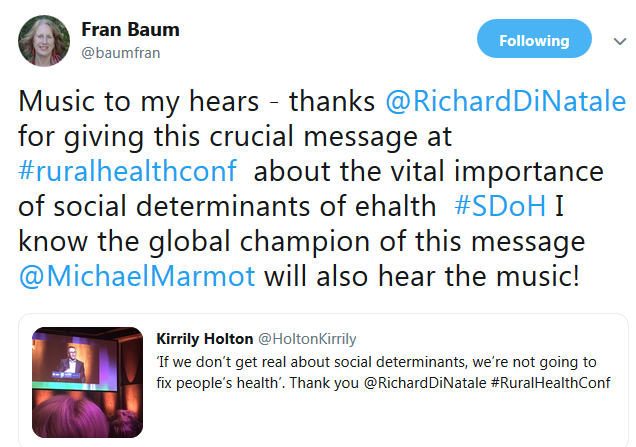 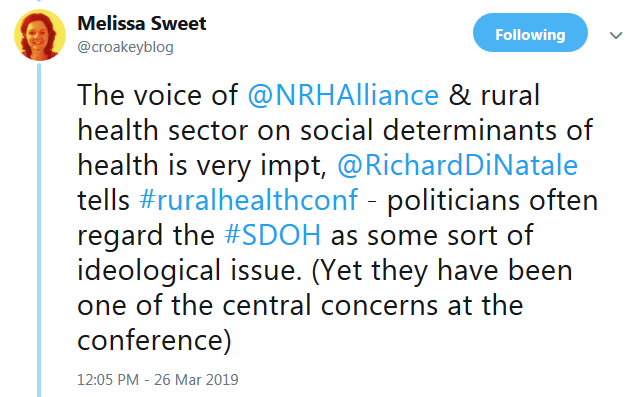 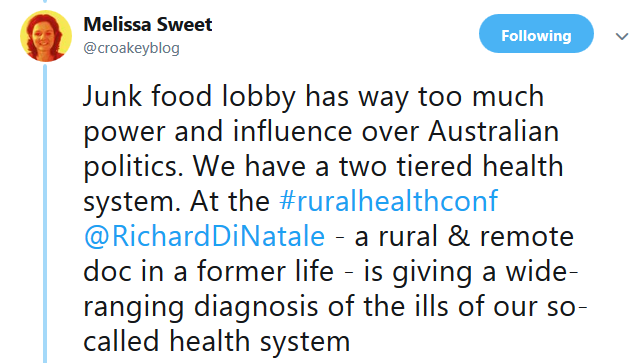 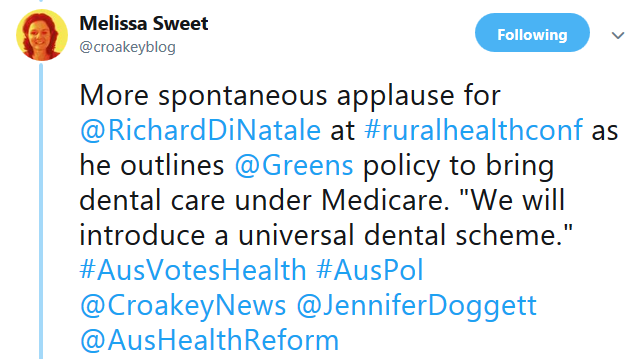 We will publish more stories from the conference over the next week or so. Bookmark this link to track our #ruralhealthconf stories.