Like the Government’s budget, the Federal Opposition’s budget reply fails to address entrenched poverty and other challenges facing many Aboriginal and Torres Strait Islander people, according to the Change the Record campaign.

Change the Record, which represents leading Aboriginal and Torres Strait Islander, human rights and community organisations, has started a petition urging both the Prime Minister and Opposition leader to provide:

Change the Record welcomes Labor’s commitment to increase support for NDIS, safe housing for women escaping violence and a living wage, but is disheartened that the Budget Reply leaves behind First Nations people experiencing poverty.

“The additional support for family violence and the NDIS is much-needed, but we have to make sure our people have equal access to the NDIS,” said Damian Griffis, co-chair of Change the Record.

“We have launched a petition calling on both leaders to address poverty to free our future. We know strong supports and fair laws will see real progress towards freeing Aboriginal and Torres Strait Islander people and ending mass-incarceration,” said Cheryl Axleby, co-chair of Change the Record.

“Labor are forgetting about people struggling to make ends meet, and did not announce an increase to Newstart or plans to scrap ParentsNext. Further, Labor allowed a huge expansion of cashless cards to go through.”

Labor’s amendments will see the cashless card become opt-out, however thousands more Aboriginal and Torres Strait Islander people will have their income controlled and freedoms curtailed by governments.

Indigenous and human rights organisations have opposed the expansion of the cashless cards.

“Cashless cards with opt-out are still discriminatory and fly in the face of self-determination for our communities,” said Mr Griffis.

“Everyone has a right to food on the table and a roof over their heads without being punished for living on their homelands. Evidence shows the cashless card does not work. Strong community-run supports will pull people out of poverty and end mass incarceration.” 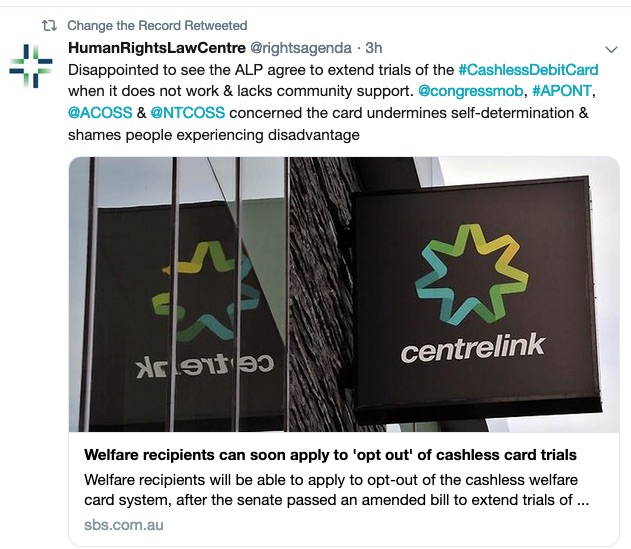 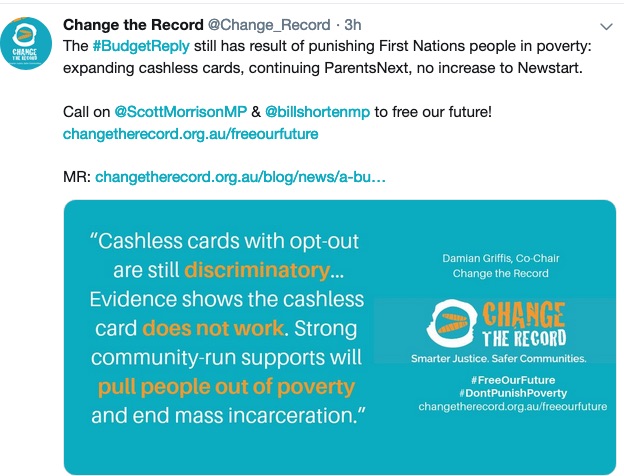 PrevPrevious“The people in most need receive the least”, and other #Budget2019 analysis
NextThe Health Wrap: Focus on pharmacy, what the Budget missed and something for gardenersNext