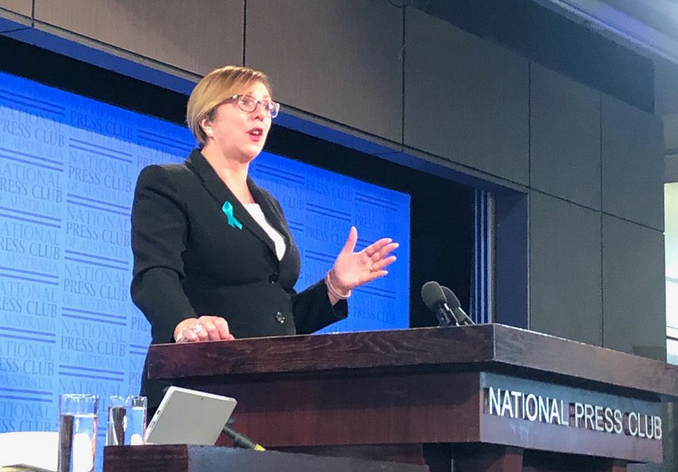 Labor’s announcement on Wednesday that it would establish a permanent Australian Health Reform Commission has been welcomed though all eyes will of course be on the detail and the funding commitments to emerge in the leadup to the next federal election.

While most media outlets published the news in advance (see links below), Labor’s Shadow Minister for Health and Medicare Catherine King outlined the proposal at her first National Press Club address in Canberra. You can read it in full here.

King said the Health Reform Commission would be an independent, legislated body “comparable to the Productivity Commission”.

It would, she said, seek to break the “boom and bust” cycle of national health policy where big, structural reform is “repeatedly undermined by the short-term and combative nature of our political system”.

In early responses, Australian Healthcare and Hospitals Association (AHHA) Chief Executive Alison Verhoeven said the proposed Commission would take “the politics and finger-pointing out of health” in order to deliver a better health system for the nation.

The Consumers Health Forum also welcomed the proposal as “a timely step towards improvement and innovation of Australia’s health system”, while the Royal Australasian College of Physicians (RACP) said such a body “was long overdue and would be a welcome addition to the sector if implemented”.

See more from their statements below.

The biggest plus – that finally we might get some vision and boldness and action on a scale beyond the election cycle and its pressures. The biggest negative – it still needs a funding commitment that is also not captive to politics and election cycles.”

Dr Sebastian Rosenberg, Fellow at the ANU’s Centre for Mental Health Research and Senior Lecturer at Sydney University’s Brain and Mind Centre, said Labor’s proposal is “sensible and long overdue” but he was disappointed that mental health was not referred to as a key priority for reform.

“I don’t think Rudd’s Reform Commission visited even one mental health facility in a year!” he said.

“A new reform commission needs to focus on the big, structural and systemic issues which are inhibiting quality improvement in Australia’s health system.  Mental health needs more help than most other areas, working with other sectors like housing, employment and education.  Huge gains are on offer.  But not with bandaids.  Significant new funds to develop the team-based approaches necessary to provide equitable and quality mental health care are necessary.  If King’s Reform Commission are serious about this, sign me up!!”

Rosenberg said he also wanted to echo journalist Sue Dunlevy’s comment to King at the National Press Club that “we all know what’s wrong with the health system – why don’t you just fix it instead of delaying taking action ?”.

“With various Royal and Productivity Commissions already underway, plus a new Reform group to set up, I am getting very excited about the prospects for the 2023 Budget for mental health.  Do we really have to wait that long before we start doing the right things?” he asked. 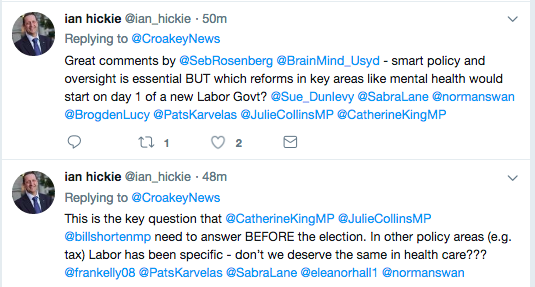 King told the National Press Club that where the Productivity Commission has an economic and financial focus, the Australian Health Reform Commission would focus on finding ways to improve our health care system and health outcomes for all Australians. She said:

It will be a body explicitly charged with reducing health inequality and improving the universality of our health system.”

She said the Commission would be “a well-resourced body” but added that its costs would be offset within the existing resources of the Department of Health.

Commissioners would be appointed for a period of at least five years, to give them the time to develop rigorous and durable policy solutions “that cannot be easily unpicked by one side of politics or another”. She said.

It will transcend our three-year federal election cycle, while also finding ways to forge consensus across the Commonwealth-State divide.

It’s job will be to shepherd important innovations from their conceptual stage to reality – even when they take many years to deliver.

It’s core mission will be simple: to find ways to improve the health outcomes for all Australians. But its specific priorities will be directed through COAG.”

King said some of its early priorities will include how to reform primary care to deal with our ageing population and rising chronic disease burden, and how to deliver better access to public hospital specialists.

It would deliver advice not just to the federal Health Minister but to state Ministers as well – “meaning a federal government will not be able to simply conceal or ignore inconvenient proposals”.

And it would not just develop long-term reforms but also hold Governments accountable for delivering on them by reporting publicly on progress.

Responses to the proposal

AHHA CEO Alison Verhoeven welcomed the proposal as big structural reform that is needed to deliver better healthcare access and affordability, rather than the tinkering around the edges that has been seen in health in recent years. In a statement she said:

Labor’s announcement is a positive step that would take a long-term view beyond our three-year federal election cycle and forge consensus across politics and the federal–state divide.

The AHHA has long called for an independent national health authority, distinct from the Commonwealth, and state and territory health departments, that would report directly to COAG, to tackle the entrenched problems facing our health services and to support better outcomes-focused, integrated care for all Australians.”

Better governance arrangements between the Commonwealth and states would result in better coordination of, and better value for, the nation’s $180 billion healthcare bill.

This will be helped by clear and transparent public reporting by the Commission.

An independent national health reform commission is a needed change to bring common sense and purpose, and better health outcomes to a system currently being shaped by too many vested interests.”

Consumers Health Forum CEO Leanne Wells said the proposed Commission “opens the way to the potential of a more integrated and long-term approach to resolve pressing health challenges including prevention, obesity, primary care and chronic disease and to overcome the current disjointed reality of federal-state divisions”. She said:

“Improving health systems and services takes time and is often confounded by the time-constraints in our political cycle.  If this commission’s primary job is to oversee reform implementation, ensure it is done well and to ensure change is enduring, this is a good move.

“Australia has a good health system: the ideal platform from which to innovate to sustain its best features and shore up its sustainability so Australians can continue to receive high quality accessible care. An expert commission with a mandate to steward important innovations from their conceptual stage to reality offers much promise.

“Key enablers to such a commission fulfilling such an ambitious agenda is for it to oversee implementation of a Ten Year National Health Plan and for its governance and mix of experts to include a robust consumer presence.

“We urge Labor to ensure a strong consumer focus in the membership and priorities of the commission.  By entrenching a consumer-focus to our national health system we can provide impetus to bridge federal-state differences.

“A Labor Government must also ensure that it avoids the creation of merely another level of bureaucracy that could become more talking shop than driver of reform.

Royal Australasian College of Physicians (RACP) Policy and Advocacy Chair, Professor Niki Ellis said the RACP particularly welcomed the renewed focus promised in the announcement by King on chronic disease management and improving access to public hospital specialists, two areas in which the College has repeatedly called for urgent attention and reforms.

Ellis said  the management of chronic diseases is particularly complex, with patients forced to navigate between primary care, hospital and specialist services. She said:

“In light of these complexities, policies relating to secondary and tertiary health sectors should not be seen as separate from reform of primary care, rather they should be treated as interlinked and requiring common structural reforms.

“One such example of a structural reform is the Productivity Commission’s recommendation to invest a modest share of current funding for public hospital  activity into a common pool to be jointly managed across the different health sectors to address chronic disease. This recommendation should be considered by the proposed Australian Health Reform Commission.”

In addition, Ellis said the RACP welcomed the focus of the proposed Commission on minimising barriers to accessing care and improving health outcomes for people who are disadvantaged:

“While we have seen a drastic improvement in the overall quality of health of Australians over the last few decades, glaring inequalities in health outcomes persist which need to be immediately addressed.” 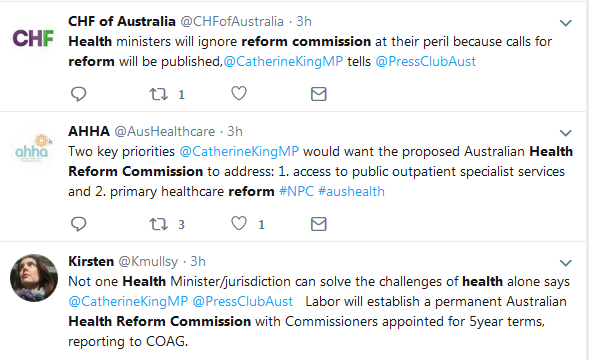 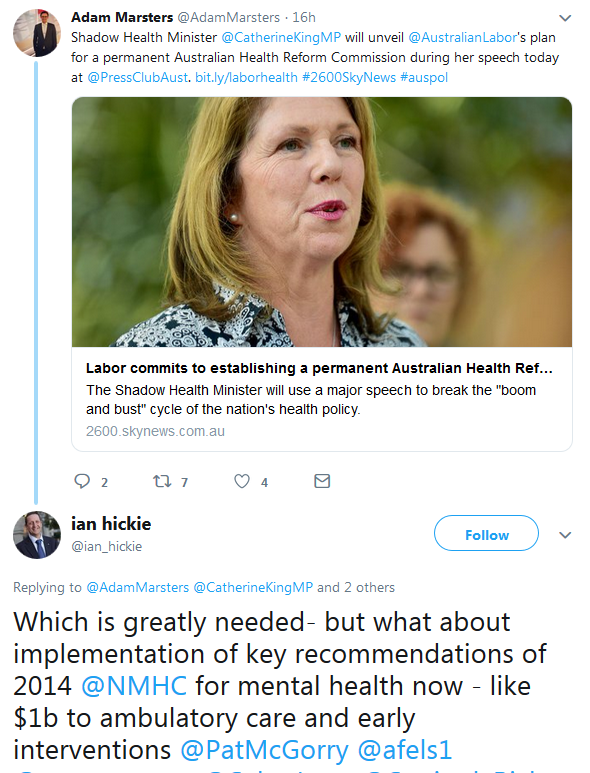 PrevPreviousMBS review urged to improve GP care for people leaving prison
NextOn the future of journalism: a new report and last days to lodge a submissionNext