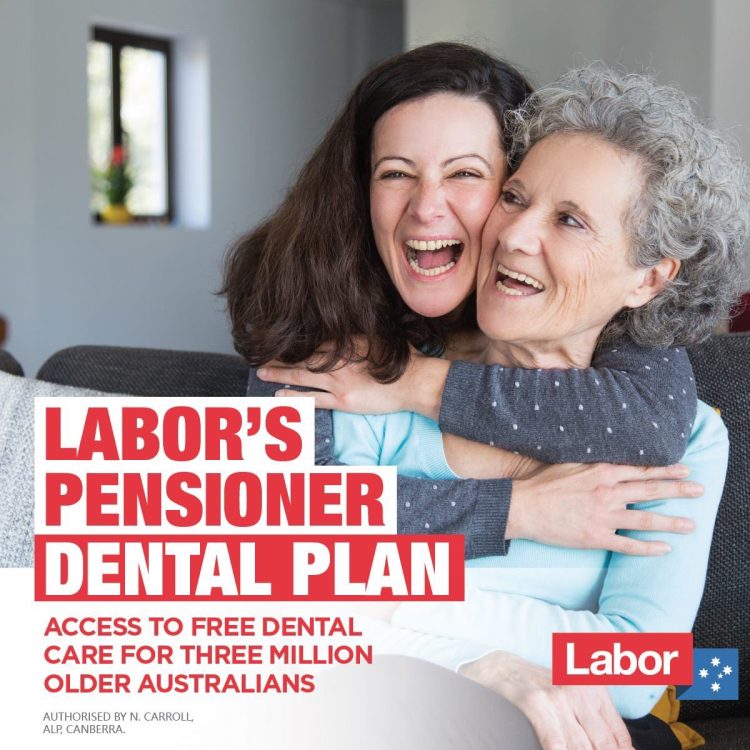 Labor’s 2019 election promise to invest $2.4 billion in a Pensioner Dental Plan – giving up to three million older Australians access to free dental care  – has been welcomed as “life changing” for individuals and as critical and long-urged health system reform.

Opposition Leader Bill Shorten has announced that Australians who receive an Age Pension or hold a Commonwealth Seniors Health Card would be eligible for $1,000 worth of free essential dental care, covered by Medicare, every two years if Labor wins the May 18 poll.

Labor’s announcement follows its introduction in 2013 of the Child Dental Benefits Scheme – giving eligible children aged up to 18 access to free essential dental care, and is, it said,
the next step towards Labor’s vision of universal access to dental care in Australia”.

Health and social sector groups called on the Coalition to “match or better” the promise, saying it would help address one of the most significant gaps in the Australian health system – and an area which has seen significant funding cuts under the Coalition.

“The mouth shouldn’t be seen as a separate body part – good oral health care is an essential part of essential comprehensive health care – and should be what the community expects from a modern Medicare,” said the Consumer Health Forum of Australia (CHF).

The CHF nominated better access to dental health as one of its top three election priorities, calling for the Child Dental Benefits Scheme to be rolled out in stages to adults, beginning with those on low incomes and ultimately providing universal dental benefits.

“The pain and cost of poor dental coverage came up constantly as we consulted members and stakeholders to shape our election priorities.  And also came up repeatedly in our out of pocket costs research over the years,” said CHF CEO Leanne Wells.

“It is unacceptable that a country with Australia’s wealth has left it this long to make dental health care more accessible and affordable – starting first with those who need it most.

The Coalition’s only response to date has been to question the cost of Labor’s proposal.

Gaps still to be filled

As well as concerns that $1,000 every two years will not be enough to cover some people’s urgent dental needs, particularly dentures, the major downside in Labor’s policy is that it doesn’t apply yet to people who receive other social security payments and live in dire financial circumstances, including those on the Disability Support Pension and Newstart.

“However what this announcement highlights is that there are thousands of people on the lowest incomes who are being denied dental services, including people receiving the Disability Support Pension, Newstart or other social security payments,” said ACOSS CEO Dr Cassandra Goldie. She said:

“More than 2 million people in Australia last year delayed or avoided dental care because of the cost. And people on the lowest incomes were the most likely to avoid dental care because of the cost. Poor dental health is a major barrier to people getting a job and it makes no sense to exclude people of working age on the lowest incomes from extended dental services.

“We know that there are more than 63,000 avoidable hospitalisations each year as a result of preventable and treatable oral health conditions. The lack of a universal scheme incurs a cost on our broader health system.

As Croakey editor Jennifer Doggett outlined in this Federal Budget 2019/20 preview article on funding and policy priorities from the health and community sector, oral health has been “one of the standout areas of policy failure in Australia’s health system”. She wrote:

There is no physiological reason why the mouth should be excluded from Medicare. Oral health is intimately related to overall health and dental problems can both cause and be caused by health problems elsewhere in the body.

There are also many reasons why it makes sense to include oral health within Australia’s universal health system. One compelling reason is the fact that dental problems, if untreated, can lead to more serious (and more expensive) health problems down the track.

You can access a host of Croakey stories on oral health needs, funding and policies  here.

Announcing the promise on Sunday, Shorten said more than 185,000 older Australians a year skip getting the dental care they need because of cost.

Yet, he said, the Coalition Government had cut $283 million a year from public dental funding – the equivalent of over 465,000 fewer dental visits every year.

While details of implementation are still to be worked out and announced, Shorten said the Pensioner Dental Plan, within its cap, would cover a wide range of dental services such as examinations, x-rays, cleaning, fluoride treatment, fissure sealants, fillings, root canals, extractions, periodontal treatment and dentures.

He said a specific schedule of benefits will be developed in consultation with dentists and experts, to ensure standard costs when accessing the scheme.

“Labor will work with dentists to roll out the scheme, with accredited private dental practices able to join on the condition that they bulk bill, and meet minimum quality, safety and efficiency standards,” he said.

Professor Marc Tennant, from the University of Western Australia’s International Research Collaborative – Oral Health and Equity, welcomed the policy but urged that arrangements for the plan focus on public providers for greater “bang for buck” and to avoid implementation problems seen with the earlier Chronic Disease Dental Scheme (see tweets below).

Health and social groups generally welcomed the broad arrangements of the proposal.

The CHF said the requirement on states and territories for bulk billing and maintenance of existing spending will mean more services to a greater number of people including those who would otherwise wait on public dental health queues.

It and other groups also welcomed commitments on data sharing and that Aboriginal Medical services will have access to the scheme.

Leading seniors advocacy group COTA Australia said Labor’s plan would provide “welcome and overdue relief for older Australians missing out on vital treatment because of cost” and called on the Coalition to “match or better” the Labor plan.

COTA said its State of the (Older) Nation Report in late 2018 found that dental services are the most difficult services for older Australians to access, given many don’t have private health insurance, largely because they can’t afford it. COTA CEO Ian Yates said:

Good oral health is particularly critical for older people who are particularly susceptible to chronic diseases such as dental decay, gum disease and oral cancer.

Poor oral health can cause embarrassment and social isolation for many older Australians. Poor dental health also increases the risk of diabetes, heart disease and chronic malnutrition in older people.

Investing in proper oral and dental care for older Australians is not only an investment in the health and wellbeing of older Australians, it is an important preventative health measure that will alleviate the longer-term pressure on our broader health system.”

Adequate oral and dental health is a huge gap in our health care system for older Australians, with devastating consequences for those who aren’t getting the treatment they need because they can’t afford it,” Mr Yates said.

This is potentially a life changing announcement for many older Australians – a good announcement by Labor – and I now look forward to similar commitments from the Government before the election.”

The Australian Healthcare and Hospital Association welcomed Labor’s plan with the heading: ‘Finally some teeth in election health promises’, saying Australia’s public dental health services have been “grossly under-funded for too long”.

Labor’s targeted investment of $2.4 billion in the dental health needs of 3 million Australians over the age of 65 with pensioner concession cards and senior health cards importantly comes with a requirement that the states and territories maintain their current public dental efforts. This will free up funding for adults under 65 to receive the care they need and will assist in reducing waiting lists.

‘We welcome Labor’s support for this funding to be used in Aboriginal Medical Services, as well as in public and private dental services. As in so many other areas of healthcare, Aboriginal and Torres Strait Islander peoples experience significant inequity in accessing dental care. Improving access to care requires a commitment to improving access to Aboriginal and Torres Strait Islander community-led care.”

Verhoeven also welcomed the requirement for data to be shared with the Commonwealth, saying there are significant data gaps in Australia’s national oral health data collections which must be addressed to ensure public investments are targeted appropriately, and that high value care is provided to the people who need it most in a timely, safe and effective manner.

She urged Labor to include water fluoridation as part of the prevention strategies foreshadowed for the plan.

‘Three million Australians currently don’t have access to fluoridated water. There has been substantial evidence available for more than 50 years that fluoridation prevents tooth decay. If we really want to put teeth into health policy, we need to ensure fluoride is available in our water supply,’ Verhoeven said.

The Australian Dental Association (ADA) also applauded Labor’s plan, though warned that  it was “critically important” that a Labor Government worked with it to develop the finer details of the policy “as there are a number of issues that need to be addressed to ensure a smooth implementation and greatest uptake of the scheme.

“The ADA also backs the model used for the Child Dental Benefits Schedule and have advocated for this model for older Australians, given its success.

The ADA said it expected the Royal Commission into Aged Care to “hear a raft of horror stories about oral and dental care”, saying its submission would raise serious questions about the state of oral and dental health and its impact on older Australians in aged care facilities.

The National Rural Health Alliance also welcomed Labor’s announcement, saying it would provide relief to older people in rural communities who did not have access to such services.

Alliance CEO Mark Diamond said access to oral health services was vital in rural areas where a maldistribution of dentists made it especially difficult for people to visit a dentist.

“This is a good announcement for the general community and rural communities in particular,” he said. 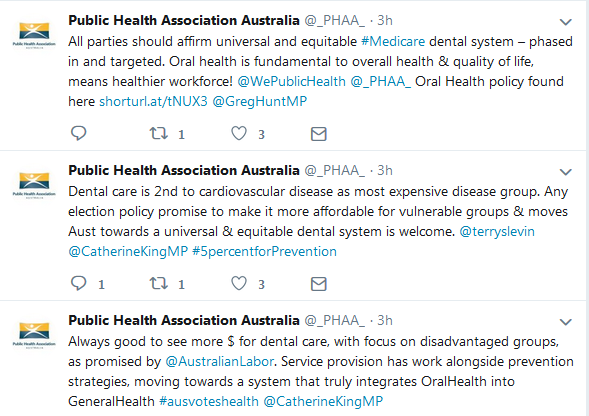 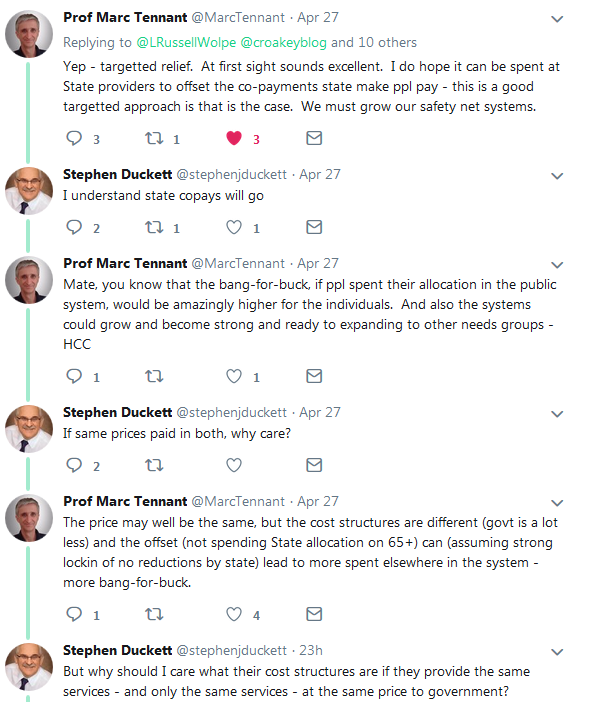 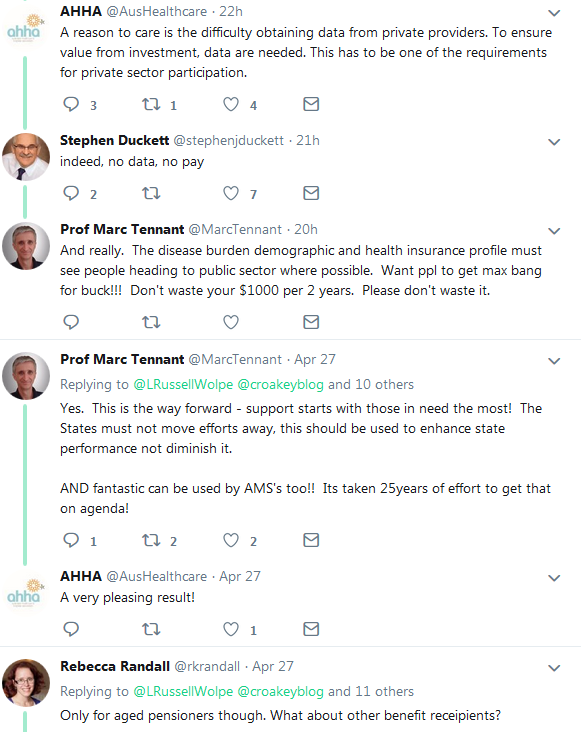