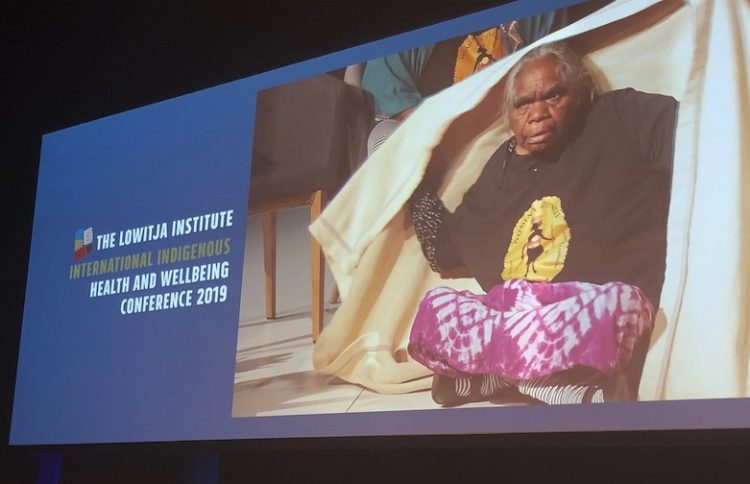 Providing a powerful illustration of the oppression of English language. Photo by Marie McInerney

“Language is the crux of everything” – more powerful stories from #LowitjaConf2019

The critical importance of Indigenous languages for health and wellbeing was a central focus of the Lowitja Institute’s recent International Indigenous Health and Wellbeing Conference on the Larrakia Nation in Darwin.

Marie McInerney and Summer May Finlay report below for the Croakey Conference News Service.

Rene Kulitja walked to the front of the stage area and laid a blanket on the floor.

Speaking in Pitjantjatjara, through an interpreter, the Ngangkari Traditional Healer talked just briefly about life and language, in what is now known as the Ngaanyatjarra Pitjantjatjara Yankunytjatjara (NPY) Lands, before white people arrived.

She then sat cross-legged on the floor of the stage and pulled the large beige blanket over her body and head until we could barely see even her eyes.

“This is English,” she said from underneath the blanket, adding:

This is representing English, which is coming and pressing down on me and I can only see out through a tiny hole.

Why is it like this? I’m not an English person. I’m a Pitjantjatjara person.” 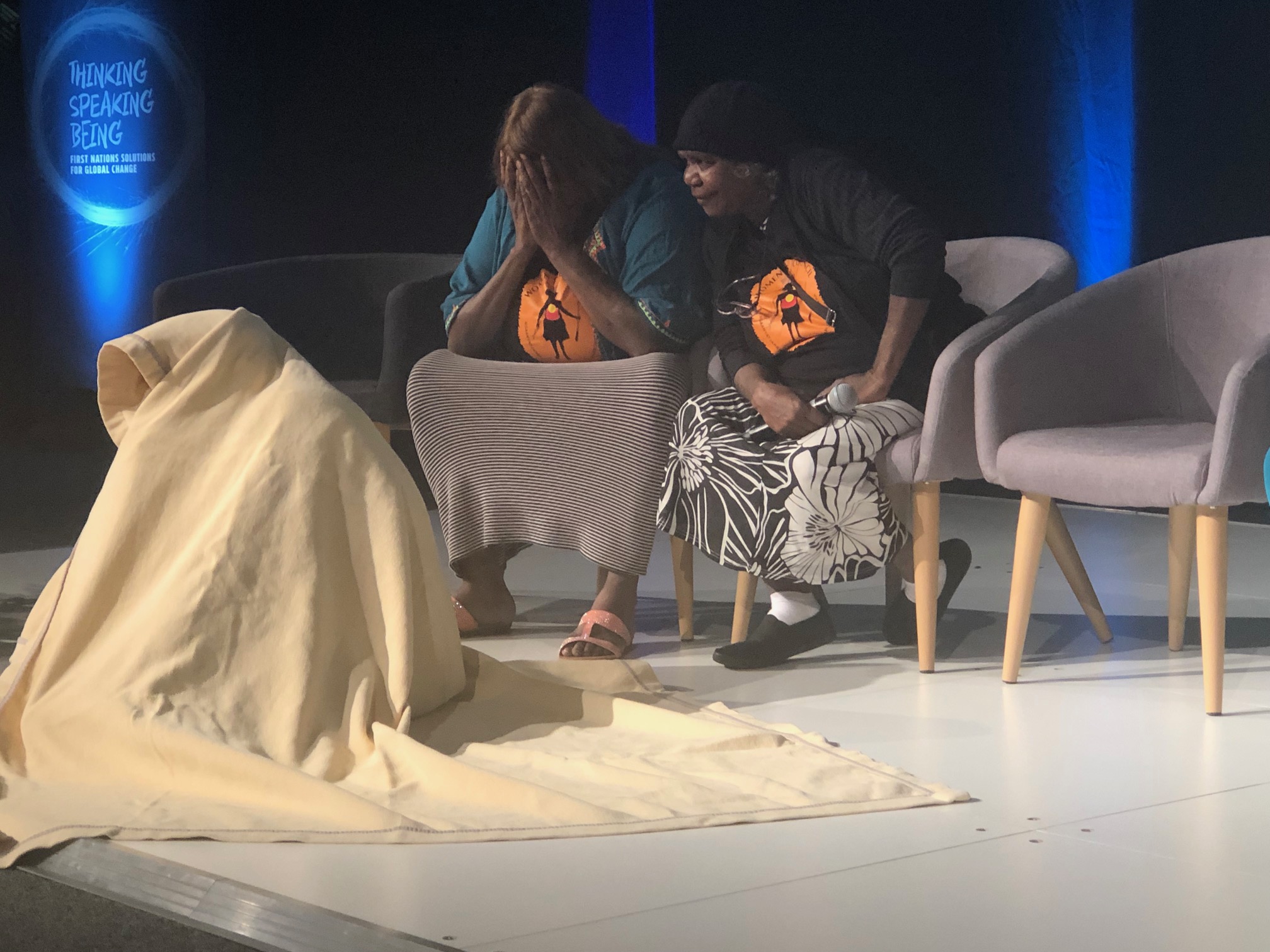 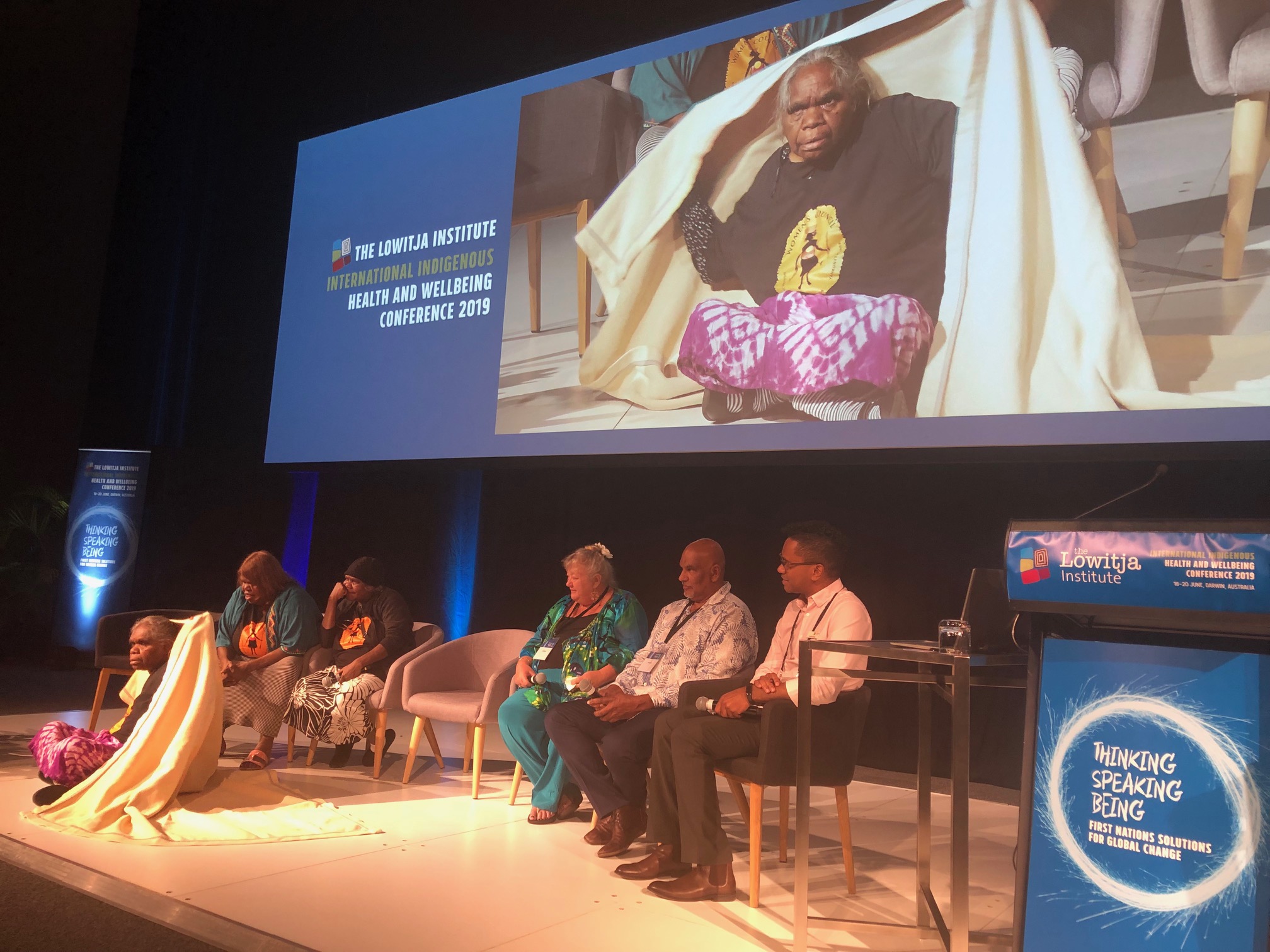 Her performance lasted just a minute or two, but captivated hundreds of delegates at a special panel discussion on the role of language at the Lowitja Institute International Indigenous Health and Wellbeing Conference in Darwin, on Larrakia land.

It also graphically captured the importance of culture and language and the impact of colonisation on Indigenous peoples, particularly in Australia where 250 Indigenous languages were spoken at the time of European settlement in 1788. 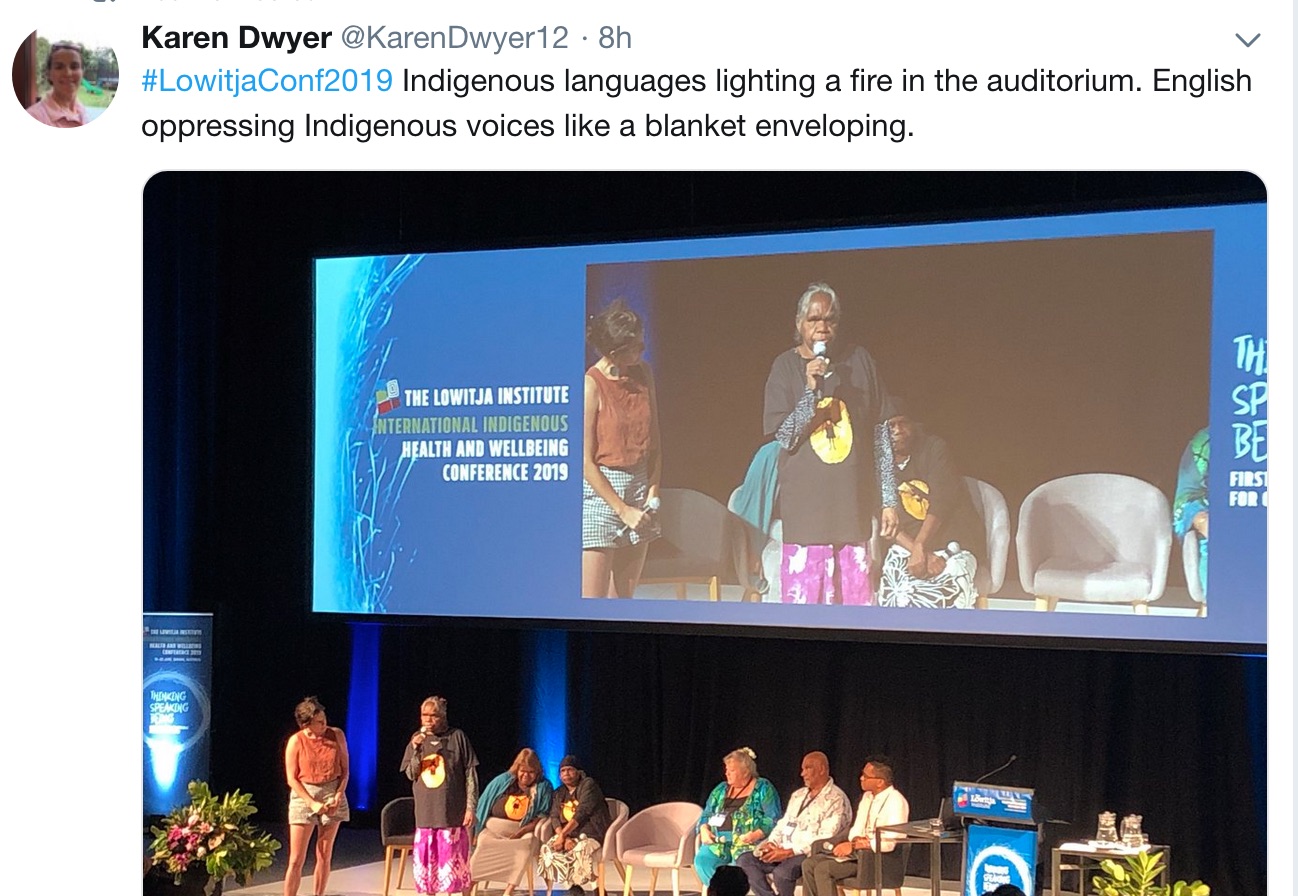 At the turn of the century, one significant international study singled out Australia as a place where languages were disappearing at a faster rate than anywhere else in the world, devastated by official policies and practices that banned and discouraged Aboriginal and Torres Strait Islander people from speaking their languages up until recent times.

Now 145 languages are still actively spoken but 110 are considered either critically or severely endangered, according to researchers conducting the five year Barngarla Language & Wellbeing Study, which is looking at the mental health and social and emotional wellbeing impacts of language reclamation in South Australia, who presented at the conference. 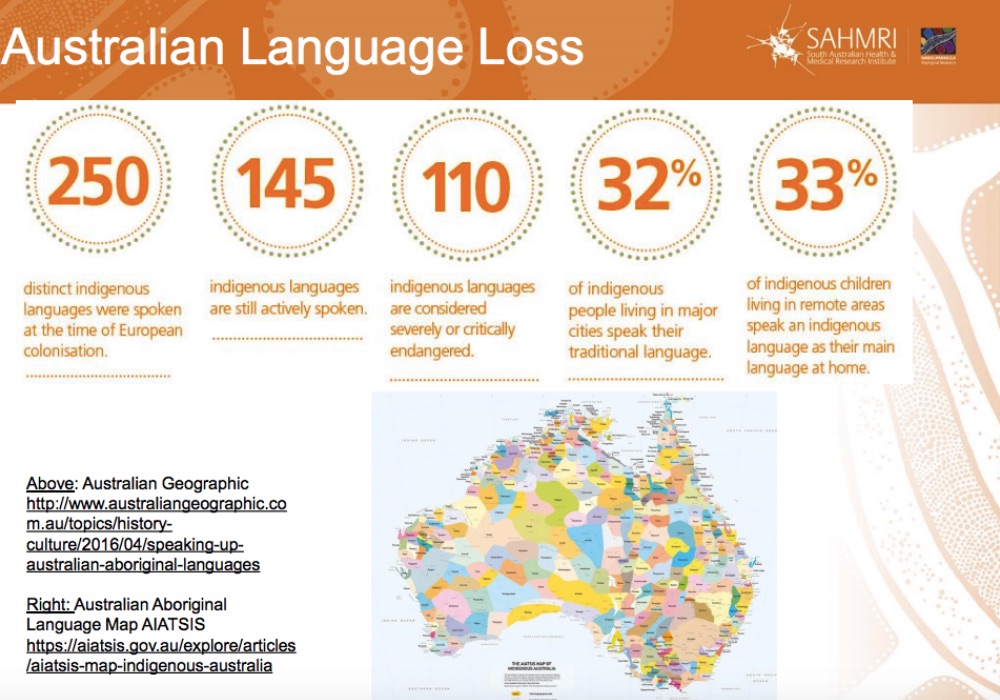 But, as the most recent report of the Second National Indigenous Languages Survey said in 2014, there is much revival underway, with “an overwhelming desire” from Aboriginal and Torres Strait Islander people “across the country and of all ages” to strengthen traditional languages and a growing recognition of its role in health and wellbeing.

That role was a key theme at the Lowitja Institute conference, which officially marked 2019 as the UN’s International Year of Indigenous Languages in its theme and many presentations, declaring:

How we speak, the languages we use, and what we’re saying all have an impact on the health and wellbeing of our peoples.

Indigenous languages and the ways we share knowledges are at the forefront of international conversations right now.”

At the conference, Croakey spoke to a number of delegates and speakers about the role of language in culture and health, and in their own lives.

Watch a compilation clip below (which closes with a dance from Renee Kulitja at the conference), or see them all individually below, or via this playlist.

Kulitja is a well-known artist, whose most famous design is ‘Yananyi Dreaming’, which covers a Qantas Boeing 737. She is also a strong community advocate, and has campaigned to address issues of petrol sniffing in Aboriginal communities in central Australia and to seek an increase in renal dialysis machines for NPY communities.

Croakey readers may also be interested in this article: Our languages are a tool to understanding our ways of knowing and being, by Ali Drummond, who chaired the panel session. Drummond is a Meriam and Wuthathi man who grew up on Torres Strait, a PhD candidate, a nursing lecturer, director of Indigenous health at QUT and board director for the Lowitja Institute.

Professor Dawn Bessarab: “When he spoke Bard, it was like listening to music”

A Bard/Yjindjabandi woman from Broome in the Kimberley and Director of the Centre for Aboriginal Medical and Dental Health at the University of Western Australia, Professor Dawn Bessarab talks about the role of language, plus her takeaways from the conference.

“I think language is the crux of everything, because language helps to construct the way you think and see the world. If you start to use Aboriginal words and think in Aboriginal concepts, it’s a completely different world view to the way English constructs the world.”

She welcomed evidence being presented on the importance of culture and particularly of going back to Country for health. “We’ve always known that but nothing is validated until it’s ‘discovered’, that’s the Western way of doing things!”

Senior Yawuru man and conference keynoter Peter Yu spoke with Summer May Finlay about efforts in his community to kickstart intergenerational language learning, with the Yawaru community currently only having about 10 people still fluent in language, as a result of colonisation.

He talked about how Aboriginal and Torres Strait Islander people should not feel shame or embarrassment for the loss of their languages, which was not their fault, but should celebrate their resilience and renaissance.

Dr Kū Kahakalau has been at the forefront of efforts to revitalise the Hawaiian language, which Indigenous Hawaiians were taught to feel shame about, and is seeking now to take it out of the classroom and back into community.

“It means really being a native person, being connected to my land, to my ancestors and to the future. To have hope for the future we have to know the past. Our language explains who we are, why we do the things we do, what is important to us, what our values are.”

Dr Vicki Saunders, a Gunggari woman from south west Queensland, talks about ways that she uses language in her work, including to shift from a deficit lens in researching child wellbeing and in the Listening to Country project which is bringing cultural comfort to women in prison.

“I come from a strong tradition where we focus on keeping our language alive as much as we can we can and I’ve been told by my aunties to use language wherever and whenever I can,” she said.

Jenifer Darr: on pain, possibility and where responsibility resides

A First Nation Yuwibara woman, Jenifer Darr is hopeful that the Native Title process can open windows for language recognition and revival for communities who had cultural ways taken from them through colonisation.

(My family) were rounded up and placed on the biggest Aboriginal reserve in Queensland, in Mackay in the 1890s.

Dorothy Yunggirrnga Bukulatjpi: “We have to keep the language strong”

Dorothy Yunggirrnga Bukulatjpi is from the Galiwin’ku community on Elcho Island, off the coast of Arnhem Land. She says:

There is a lot of language in my community.

We have to teach our children to be able to stand in that and make themselves strong… We have to keep the language strong.”

Mara West and Isabelle Adams: Language is part of culture

Mara West and Isabelle Adams are joint coordinators of the Kulunga Aboriginal Research Development Unit (KARDU) at Telethon Kids WA. They talk about the role of language in their lives and in health, including the need for health researchers to make their language comprehensible. West says:

It’s one thing to speak language … but I think we also have to be cognisant that we speak a language that community people can understand.

We work with researchers and we’re always telling them they need to have a  plain English translation of their research because sometimes researchers and clinicians and scientists get carried away with the jargon they use in their different areas.”

Alison Wunungmurra: Standing in two worlds, “valuing what you bring”

Alison Wunungmurra is a Dhalwangu Yolngu woman, who is a Family Educator and teacher in Gapuwiyak in north-eastern Arnhem Land.

She is looking for solutions for young people that bring together Indigenous and non Indigenous families and colleagues in ways that say “I’m valuing your ideas and I respect who you are and what you bring to this space…to say we’re here together in this journey, what is the next step we need to take?”

Language is our identity. It highlights who we are as Yolngu…

My vision is to see a Yolngu kid be the PM of this country, for our kids to be flying the jetplanes…”