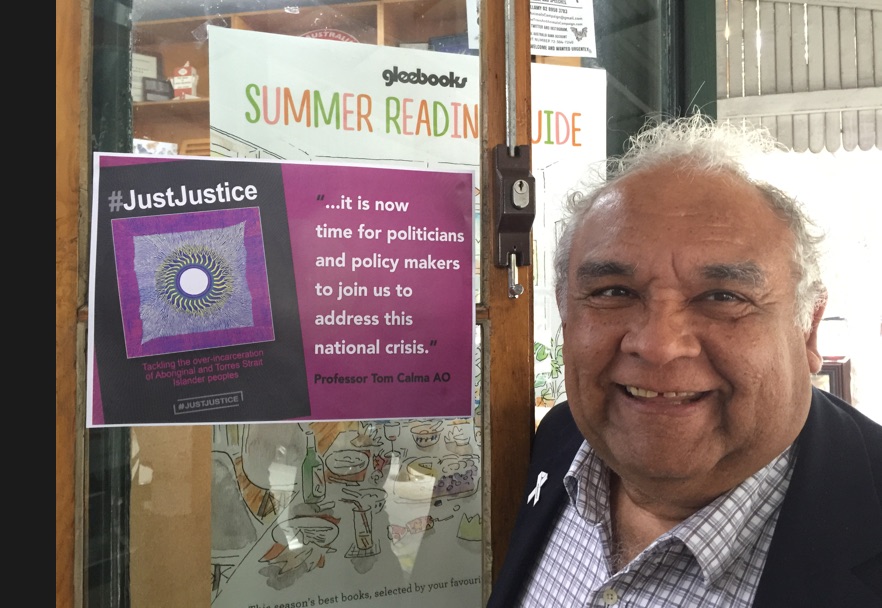 At the launch of the #JustJustice book in Sydney on Sunday, politicians and policy makers were urged to “read and absorb” its advice for stopping the over-incarceration of Aboriginal and Torres Strait Islander people.

Professor Tom Calma AO, Chancellor of the University of Canberra, told the packed launch at Gleebooks that everyone in the room had a responsibility to bring the issue of over-incarceration to the attention of their MPs. 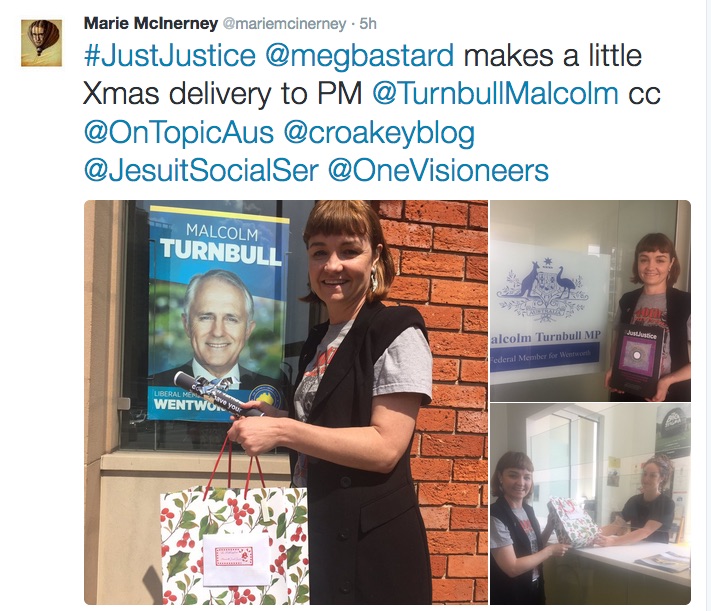 He suggested sending a copy of the book – which is freely available online – to politicians.

“They need to understand this is not an issue that is someone else’s problem,” he said.

The Prime Minister Malcolm Turnbull has no excuse for not reading the book – which has already had more than 2,700 downloads.

Dr Megan Williams, a descendant of the Wiradjuri people and a #JustJustice team member, hand-delivered a Christmas copy to his electorate office in Edgecliffe today, and met with a very cordial welcome from a staff member.

In a Periscope interview outside the PM’s office, Williams said the #JustJustice team offered the book to him as a way to enliven the current National Aboriginal and Torres Strait Islander Health Plan and to meet closing the gap targets as well as commitments under the UN Declaration on the Rights of Indigenous Peoples. (Watch the clip here and at the bottom of the post).

“Very best wishes for the festive season and we do hope you take the time to read this,” she said.

It was a message also taken up by her #JustJustice colleague Summer May Finlay in this clip, urging the PM to use his “listening ears”. (Also watch the clip at the end of this post). 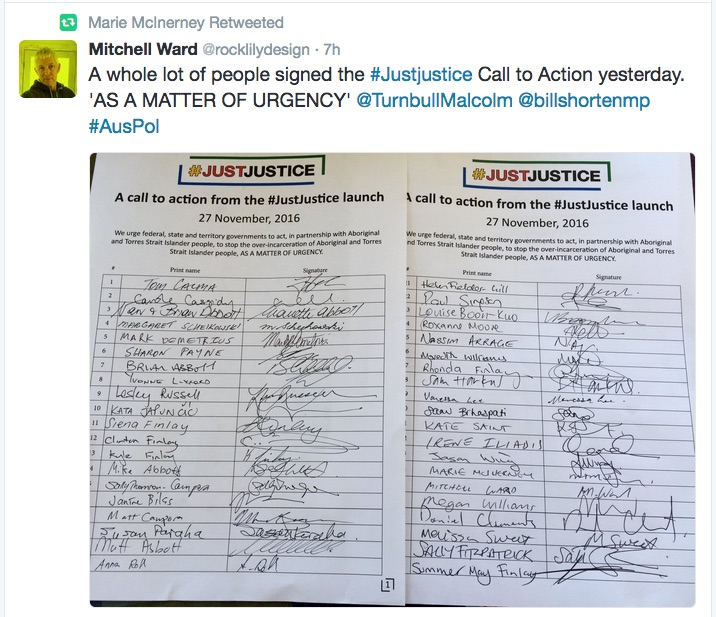 Croakey readers are invited to download the 242-page e-version and to take up Calma’s call to spread the word, in circulating the link widely, encouraging libraries to stock the book, teachers and educators to use it, and politicians to read it. We would also love to see the book and contributors featuring at writers’ festivals around the country.

The book compiles more than 90 articles from more than 70 contributors published over the past 18 months at Croakey since more than 300 donors contributed to the crowdfunding campaign that concluded in mid-2015.

Warm thanks to contributors who attended the launch, including Roxanne Moore (who was also present at the early discussions leading to the birth of #JustJustice in early 2015), Richard Weston, Sharon Payne, Jason Wing, Eugene Schofield-Georgeson, Dr Ruth Armstrong, Sam Harkus, Tiffany Overall and Heather McCormack.

Calma said it was important the book privileges the voices and expertise of Aboriginal and Torres Strait Islander people and organisations and takes a solutions focus. He also highlighted the importance of youth – a message powerfully underscored by the Acknowledgement of Country, given by 13-year-old Mannix Thomson, a descendant of the Wiradjuri people.

Calma also revealed that the Commonwealth Department of Health is establishing a social and cultural determinants unit that will come into effect from 1 January 2017 and will be trialed for six months.

“The unit will comprise executive level staff from major departments to operationalise the National Aboriginal and Torres Strait Islander Health Plan Implementation Plan,” he said, adding that the National Health Leadership Forum will have a role in the new unit.

The launch featured a panel discussion facilitated by #Just Justice team member Summer May Finlay, with Yvonne Weldon, a Wiradjuri woman from Cowra with ties to the Kalare/ Lachlan and Murrumbidgee Rivers in NSW, who is Chairperson of the Metropolitan Aboriginal Land Council located in Redfern.

Also on the panel were Michael Doyle, an early career Aboriginal researcher in the alcohol and drug field with a particular interest in prisoner health, who is in the final year of his PhD at the Kirby Institute, UNSW, and Dr Megan Williams.

A strong message from the panel was that governments continue to ignore countless reports and investigations that all recommend how to address over-incarceration, and that governments must stop implementing programs to which Indigenous people and communities are not party.

“From our perspective, if we don’t have Aboriginal people leading the way, we don’t actually have the way at all,” said Weldon.

Calma highlighted a number of stories about the failure of governments to either grasp new policy solutions, like Justice Reinvestment programs, or to provide proper funding to programs that are proven to be successful, such as the Custody Notification Service in New South Wales and the ACT.

“We’re not short of information (on solutions),” he said. “What government needs to do is work with us to implement them.”

Prisons had been shown to be “extremely costly, damaging and ultimately ineffective at reducing crime,” he said.

Governments needed new and innovative approaches to address underlying socio-economic disadvantage such as poverty, poor education, mental health, drug and alcohol abuse, high unemployment and disability that “are the hallmark of crime and imprisonment of Aboriginal and Torres Strait Islander peoples.

“You hear stories, and they’re true, where some people would rather be inside prison than outside: that’s a real sad indictment on society that people feel safer inside prison,” he said.

Another strong message from panelists was the vital need for better post-prison support to stop high rates of recidivism among Aboriginal and Torres Strait Islander prisoners, who often enter or return to prison as a result of basic breaches in paying fines or on remand and then miss out, as a result, on rehabilitation programs and post-prison supports.

Yvonne Weldon said: “If that navigation to that (post-prison) pathway is not clear, then the cycle will not change because all we are creating is pathways to come back…the exit point becomes the entry point.”

Williams said the #JustJustice series did not just put forward solutions for better programs but also highlighted “the need to insist on accountability” for legislation and policies that promise better support for Aboriginal and Torres Strait Islander people in the justice system.

“All of the examples in this book help us to meet legislative demands as well as policy principles,” she said. “Some of the policies at federal and state levels are beautiful; we are saying ‘here are examples to enliven those policy statements, let’s get on with it!’.

Doyle told the launch about his research work with young Aboriginal and Torres Strait Islander male prisoners, interviewing them about what they thought would work best for them in alcohol and drug treatment. He said: “it’s stunning it’s the first time anyone has really done that.”

His big takeaway message was the need for young Indigenous men to have more role models.

“It shouldn’t be a strange thing to come across an Aboriginal person in a university but be all too normal in the prison system,” he said, saying how the prisoners he worked with were “fascinated” to meet an Aboriginal man doing what he was doing.

“At the end, I would ask if there were any questions; they’d say, ‘yes, how do you get into uni?’”

In response to a question by #JustJustice contributor Sharon Payne, the panel also urged more effort to address mainstream media perceptions that family violence in Aboriginal communities is caused only by Aboriginal people and that FASD is an Aboriginal problem.

Calma urged those in the room to challenge the stereotypes often perpetrated by the mainstream media, to read the #JustJustice series, to look at NITV or SBS “to get another perspective”, and for Aboriginal and Torres Strait Islander scholars to start writing and speaking out more, on platforms like The Conversation.

“We are too silent as a peoples,” he said. “Hopefully this book can give people the courage to stand up and write the good stories that challenge the orthodoxy.”

Yvonne Weldon urged for Australia to confront racism, saying that her daughter’s school “believes Australia wasn’t invaded”. Stressing the importance for healing, she warned about the implication of bringing up a new generation “angry because of what they have lived through, their parents and grandparents”.

Williams said another important message of the #JustJustice series was that it offers solutions for non-Indigenous communities that suffer over-incarceration and other issues.

She challenged non-Indigenous Australians to support Aboriginal and Torres Strait Islander people by distributing information that can lead to policy breakthroughs and by “learning more about the culture and country that you’re from.”

“Become au fait with the (Indigenous) names, be comfortable with who you are as a citizen, sharing this land with this unreconciled history,” she said. “It’s not easy to make that process till you fall in love with Aboriginal people and culture.”

“Our solutions are for every community and lots of us are multicultural.”

Selection of tweets from panel discussion 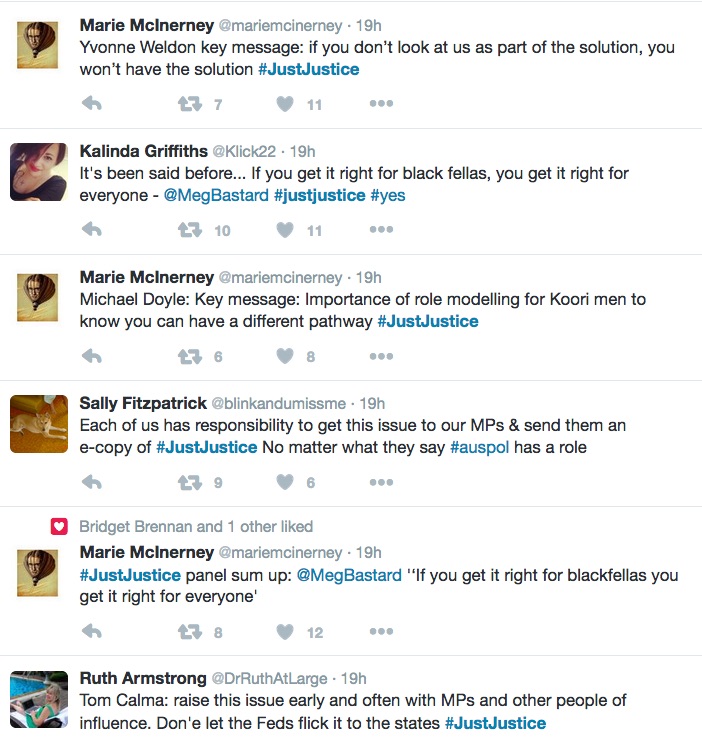 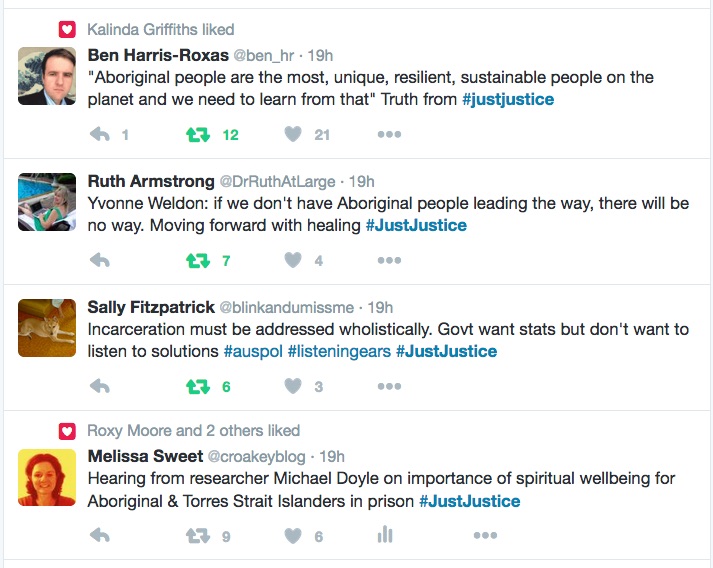 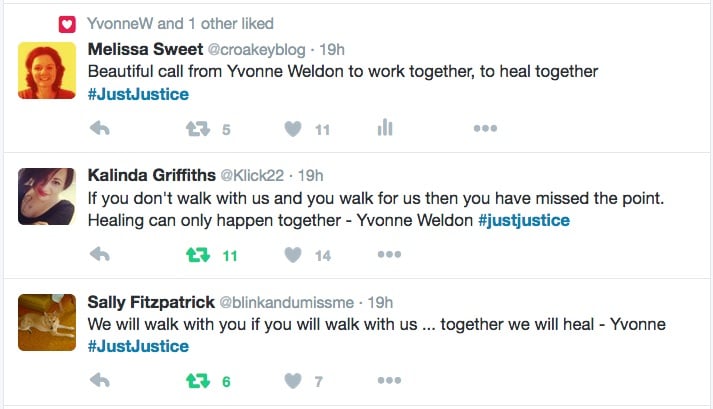 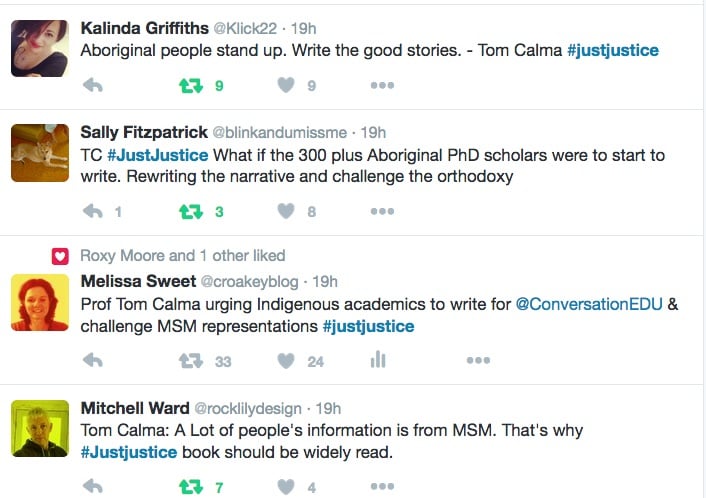 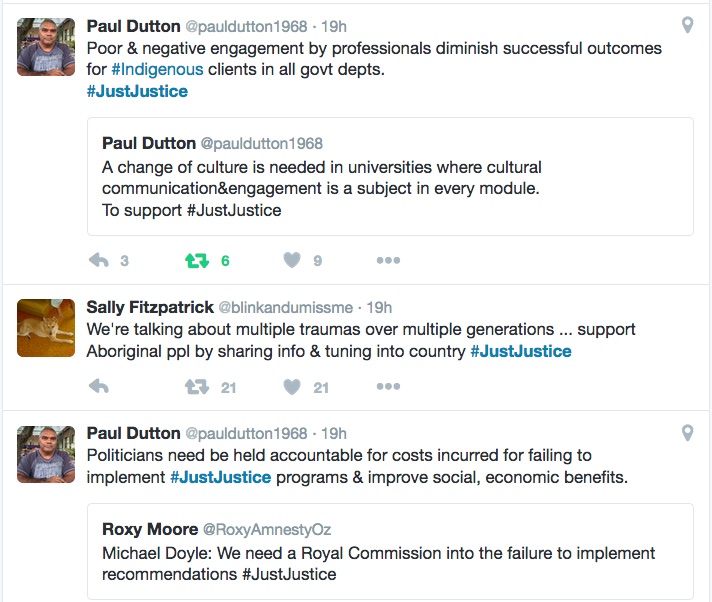 With all the Twitter action, it was great to see #JustJustice trending nationally. 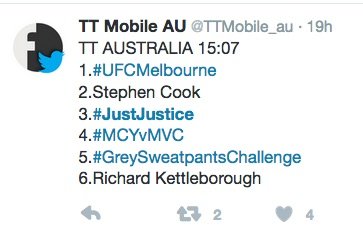 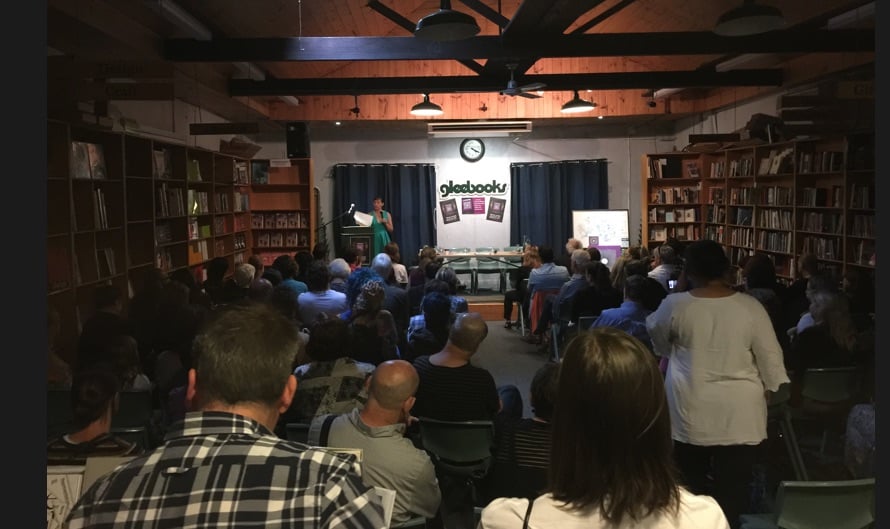 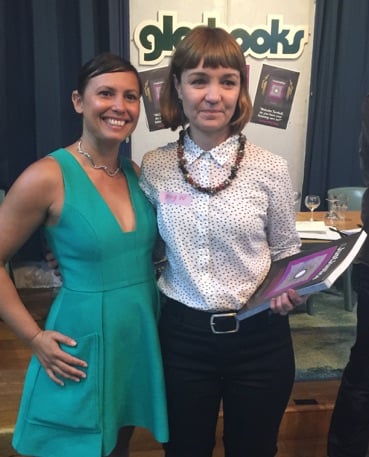 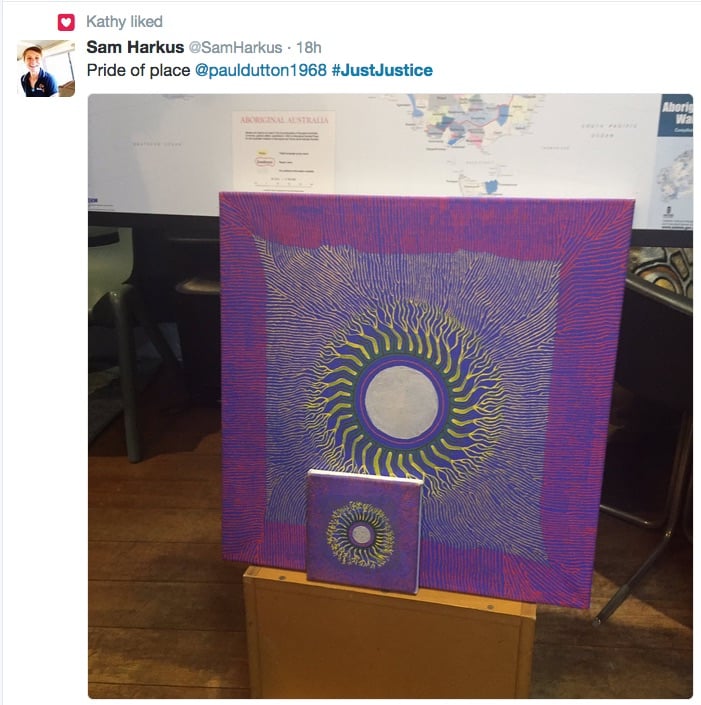 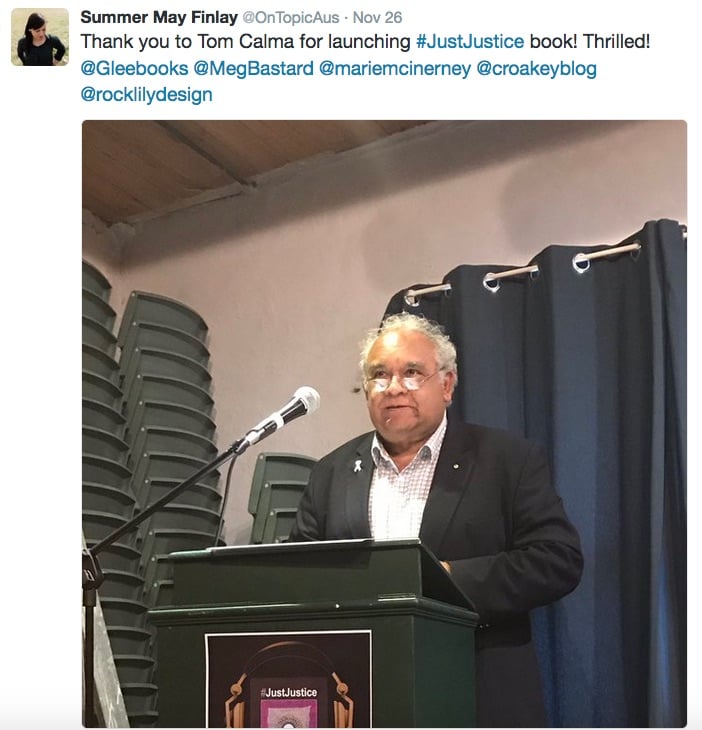 We thank all those donors, including premium donors Jesuit Social Services and Frank Meany from One Vision, and the 70 plus contributors from across Australia, including academics, policy makers, community members and people with lived experience of the justice system.