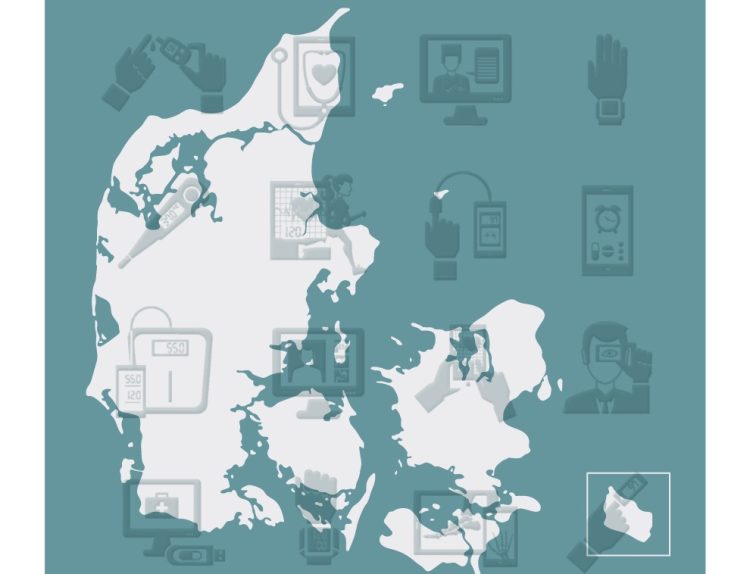 Image from the cover of a report, Denmark – a telehealth nation.

In an ode to primary care published ahead of the Federal election last year, GP Dr Karen Price suggested Australia could learn from Denmark, which has been able to dramatically reduce the number of hospitals they need because of investment in primary care.

Our emphasis must shift from putting more and more money into inpatient hospital care – to improving care outside hospitals, providing more outpatient ambulatory care on hospital premises, and increased prevention and health promotion, they write in an article first published at John Menadue’s site, Pearls and Irritations.

(The report cited in the feature image, Denmark – a telehealth nation, can be read here.)

Denmark has been recognised as a world leader in healthcare reform over the past decade or so. It has a current estimated population of 5.8 million people, compared with 7.5 million in NSW, of whom 4.8 million live in the Greater Sydney Area, according to ABS statistics.

Denmark has a land area of 42,933 km2, compared with 809,444 km2 in NSW, and whilst there are clear differences in geography, we argue that these cannot totally justify the difference in the comparative reliance on hospital-based care between the two systems. At last count there were 220 public hospitals in NSW and 21 in Denmark.

The Greater Sydney Area alone, with a smaller population than Denmark, and, at 12,369 km2, less than a third the size of it, has a total of 103 hospitals (48 public and 55 private), according to Info Australia.

It was recognised early in the Danish reform process that sweeping change to their system was imperative, given that the population was ageing and that there was a consequent increase in chronic disease and multiple morbidities.

It was considered that radical change was possible; but that change should be fundamentally based on evidence, and that clinicians, patients, carers and families and the population at large should be involved from the beginning.

As an example, “citizen juries” were presented with the evidence and came to rational conclusions. This enabled a fundamental shift in power away from vested individual and group interests, which would have inevitably been disposed to militate against the required radical changes. The influence and power of the bureaucracy also needed to be tempered. Andrew Wilson, in a March 2015 blog in P&I, has also suggested the use of citizens juries in Australian healthcare reform.

In Australia, Ministers, the media and the community seldom think beyond hospitals when they think about health services. And Australia is not alone, the UK Daily Telegraph of 29 September 2019 quoted Boris Johnson in campaign mode pledging that “I will spend 12 billion pounds and build 40 new hospitals in the next 10 years”.

In the last Australian election both major parties promised more building and refurbishing of hospitals, whilst the NSW Health website currently says under the banner of “Rebuilding Health”, that “There is a hospital building boom going on across NSW to provide more and better treatment to patients”.

However, in Denmark local politicians were persuaded that change was necessary, and that the focus of healthcare needed to be shifted away from simply building more hospitals. Expert committees were established, and support gained from the Danish Medical Association.

The Danish reforms were based on three principles:

Firstly, there should be fast and equitable access to high quality care and improved acute services. In general, the population accepted the argument that a smaller number of quality acute services was preferable to the proximity of more geographically dispersed services.

Secondly, there should be an increase in primary healthcare-led prevention, health promotion and community-based services in order to improve patient care in the community and avoid hospital admissions if at all possible.

Thirdly, and underpinning the above, was the implementation of a nationwide comprehensive electronic patient record.

In 2007 there were 40 hospitals in Denmark. By 2016 there were 21. As many health services as possible were provided through primary healthcare, health centres and outpatient clinics. Hospital admissions were reserved for the acutely sick, providing them with highly specialised services.

Forty-six primary care centres were established by Municipalities, with the main function of providing health services to the general population, delivering all aspects of health promotion, disease prevention and rehabilitation, and focusing particularly on patients with chronic conditions. This relatively recent article examines emergency and urgent care systems in six countries, including Denmark, identifying reform trends.

Some hospitals were closed, others transformed into health centres. The remaining hospitals were subject to strict criteria if they were to maintain government funding. Criteria included capacity to deliver specific clinical services, patient volumes, experience and expertise, access to technical services, and documented clinical quality.

In Denmark there has been an almost seismic shift in the focus of healthcare from tertiary and quaternary hospital-based services, to the primary care system, as described in this article by Jill Margo in February 2019. In essence, “the GP is the gatekeeper of healthcare, concluding 9 out of 10 issues.”

All referrals to hospitals except emergencies are now made by GPs, many of whom run out of hour’s services, often on hospital premises. There are now more nurses and health workers on the ground and in patient’s homes, providing in situ healthcare for patients with chronic conditions.

Electronic patient records have been fully implemented in Danish hospitals and an increased use of telemedicine for patients with chronic conditions has allowed even more patients to be treated in their homes.

It is estimated that there has been a 50 percent increase in ambulatory visits to hospitals and a 20 percent decrease in demand for hospital beds. Waiting times for planned surgery have decreased by 20 percent, whilst increased activity in ambulatory care, shorter waiting times and lengths of hospital stay, have all been achieved. A substantial share of hospital care is now delivered as outpatient care within the hospitals.

There is now an App to guide patients to out-of-hours centres. The use of private hospitals has increased as a means of reducing waiting times, and a new method of financing healthcare has given municipalities incentives to invest in health prevention and health promotion.

Meanwhile, back in Australia, the Federal Fovernment has spent $8b on hospitals over the last eight years.

John Menadue chaired a Generational Health Review in South Australia in 2003. He advised the SA Government that its health service should be “primary care focused”. However, SA subsequently spent $2.4 Billion on a new Royal Adelaide Hospital.

Supporting patients in the community using integrated approaches to care has demonstrated reductions in unnecessary hospital visits by delivering care closer to home.

Focusing on preventative healthcare in the community also helps people stay as healthy as possible for as long as possible while ensuring the hospital system operates as efficiently as possible.

The Premier’s Priority aims to reduce potentially preventable visits to hospital by five per cent through to 2023 for people who can safely receive their care in the community. Delivering this result will strengthen the care provided to people in the community, improve patient experience and keep people healthier in the long-term.”

This is clearly a move in the right direction and should be applauded; however, to achieve this target would reverse a concerning trend where “the number of potentially preventable hospital days has steadily increased from 2.1 million in 2013–14 to 2.3 million in 2017–18”.

The Premier rightly states that: “Reducing the number of days spent in hospital for patients with conditions where a hospital visit can be avoided will require focused and coordinated effort between hospitals and primary care providers.”

It seems that there is much that we can learn from Denmark about healthcare reform. The focus of our work in the early 2000’s was the acute system in the Greater Metropolitan Area of Sydney, and as such, we were not asked to examine the relationship with the primary health sector. This was a significant shortcoming as demonstrated by the holistic approach taken in the Danish reforms.

Our emphasis must shift from putting more and more money into inpatient hospital care.

We need to improve care outside hospitals, whilst providing more outpatient ambulatory care on hospital premises, and increase our emphasis on prevention and health promotion. Our GPs, together with nurses and allied health professionals in the community and in the home should be central to the delivery of health services.

• Jon Blackwell has managed hospital and health services in the Pilbara and South Australia and was the CEO of the Central Coast Area Health Service from 1997-2003. He was subsequently CEO of Workcover NSW from 2003-2009.

• Kerry Goulston was convenor of the Health Reform Group from 2002-2018. He worked for many years as a Gastroenterologist in hospital salaried positions and in private practice.

This article was first published at Pearls and Irritations.