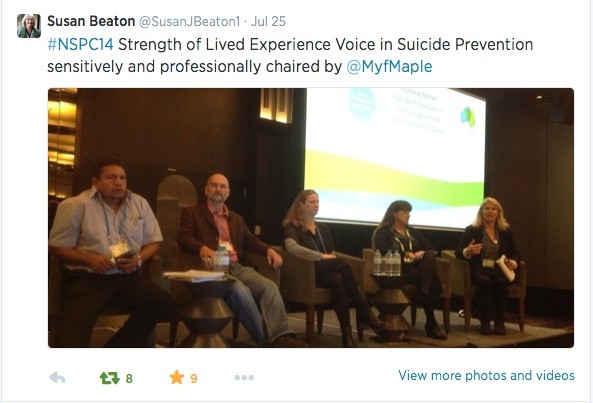 One of the concepts that will endure beyond the bounds of the 2014 National Suicide Prevention Conference is the value of learning from the lived experience of suicide.

Throughout the conference, attendees and presenters alike emphasised the need to include in research and prevention programs the voices of people who have survived a suicide attempt, had suicidal thoughts, or who are bereaved by suicide.

The importance of lived experience was also the subject of the conference’s final special session on July 26, Harnessing the Voice of Lived Experience.

In addition to panels and presentations elaborating on how lived experience can be used, the session presented a draft national statement on the inclusion of lived experience in suicide prevention.

For Suicide Prevention Australia CEO Sue Murray, lived experience is unique, rare and effective as both a resource and a form of recovery.

“Lived experience and harnessing it is bringing in an expertise that is only available to those people who have been directly impact by a suicide, or have had suicidal thoughts,” she said in an interview before the session.

“It can inform researchers about the kind of questions that need to be answered, it can inform clinicians about the type of interventions that are going to most effectively impact on an individual’s decision about taking their life, and it’s going to help communities to understand that you can continue to live a productive life despite the impact of suicide.” 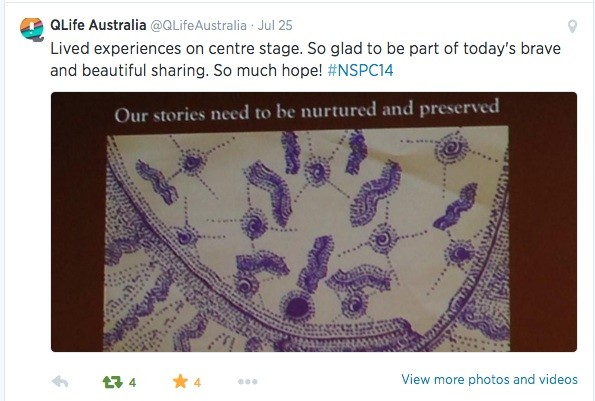 “Like many in the community, I had no deep knowledge of suicide until I lost my son in 2007,” he said.

“In about 2008 I had a great need to find meaning, so I became involved in Lifeline in order to give back to those who had helped myself and my family through that really dark time after the loss of our son.

“In about 2009, 2010, I got involved with SPA. It gives great meaning and purpose to my life to be a leader in change in our community’s views around suicide, and to be there for others who have had similar experiences.”

The stigma attached to suicide is often what stops at-risk individuals from seeking help, and what makes suicide bereavement especially painful.

Using lived experience in research, treatment and engagement ameliorates the stigma of suicide, which is an important part of what makes it an elegant tool for preventing suicide.

Sue Murray said: “Whether you’re someone who has attempted to take your life, or you’re a carer, or if you’re bereaved by suicide, the nature of suicide creates a schism between you and the rest of society to some extent.

“So, being able to be a part of a wider community that wants to address suicide, and being respected and valued in that community, gives great comfort and meaning to your life again. You can be a part of a community, and you can achieve great things.”

David Kelly said: “They say it normalises suicide. That’s what we’re aiming to do.

“We want to make it so suicide is not something that isolates people from a community, in fact there’s a community that is prepared to embrace that suicide is a complex social issue, and there are things that we can do about it.’

During Friday’s plenary panel, Suicide Risk Assessment: An Effective Tool for Practice?, Jacinta Hawgood from the Australian Institute for Suicide Prevention and Research made the case for the input of lived experience into risk assessment.

Risk assessment is a problematic prevention tool, for the most part because of its ineffectiveness but also because it has the potential to disenfranchise patients who are at risk.

Feedback from patients who undergo risk assessment could help change that.

“One of the most common comments from patients is that they are angry when a clinician is only interested in whether they will suicide again, and not their emotional well-being,” she said.

“I’m so excited to use lived experience, we’re eager to learn what kinds of questions to ask, and how people at risk of suicide are feeling.” 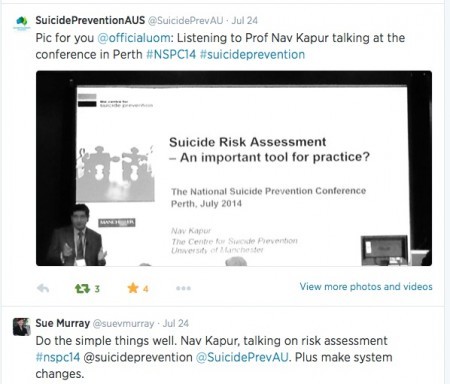 At the same panel, Professor Nav Kapur from the University of Manchester noted that in almost 90% of suicides that followed a risk assessment, clinicians estimated a low risk.

Further, even though risk assessment metrics almost certainly cannot predict accurately whether a person will attempt suicide, research shows that the use of assessments results in a 40% reduction of suicides.

Kapur advocates the use of psychosocial assessment, rather than risk assessment, to understand what is going on fully with the patient, and involve them as a subject in their care, rather than the object of an assessment quiz.

Kelly said that this approach also needs to be taken across the board in suicide prevention.

“It’s about having a seat at the table in terms of developing strategy, and developing academic research,” he said.

“It’s about not being the subject of academic research, but being a part of how that research is undertaken. It’s about being collaborative.” 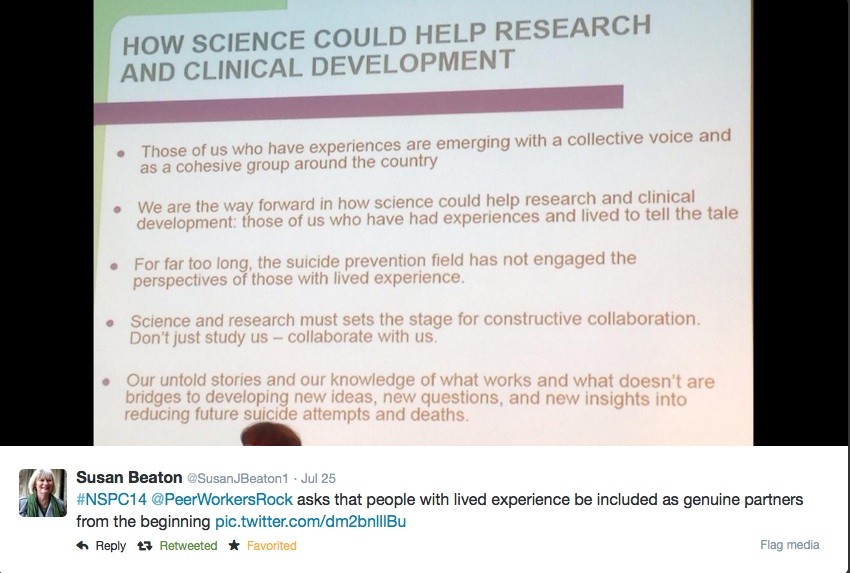 Saturday’s special session launched a draft of the SPA lived experience committee’s Lived Experience Statement, which is made up of eight key principles.

The principles were developed at a symposium of the committee and forty lived experience individuals. They will be discussed among key stakeholders and revised over the next three weeks before their official release.

1. Lived experience changes the culture surrounding suicide and preserves and promotes life through compassion and understanding.

2. People with a lived experience have a valuable, unique and legitimate role in suicide prevention.

4. Empower and support those with lived experience to share their insights and stories with a view to preventing suicide.

5. Utilise our lived experience to educate, promote resilience, inspire others and instil hope.

6. People with lived experience support, advocate for and contribute to research, evidence-based practice and evaluation.

7. All suicide prevention programs, policies, strategies and services will at all levels include genuine meaningly participation from those with lived experience.

8. Encourage and nurture collaboration and partnerships between organisations and stakeholders.

Meanwhile, the Twittersphere reported on priorities and gaps in suicide prevention 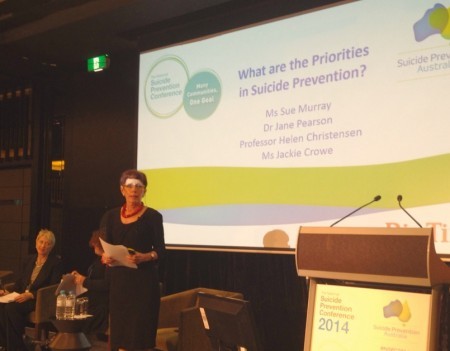 The tweet below cites Dr Matthew Spittal, a Senior Research Fellow within the Centre for Health Policy, Programs and Economics in the Melbourne School of Population and Global Health at the University of Melbourne. 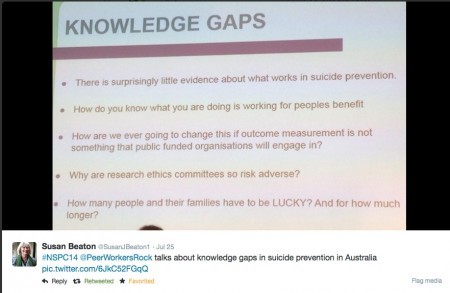 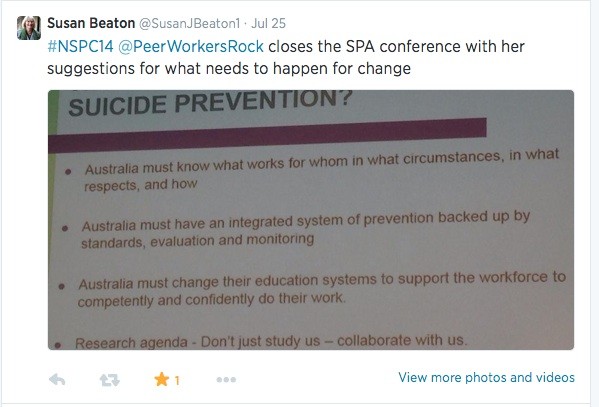 Tweets below cite Mic Eales, an artist whose research is titled, Different Voice, Different Perspective: a visual arts enquiry into understanding suicide through original voice narratives; and Danny Ford, who is of Nyoongah heritage and is a consultant with a background as a Senior Executive Officer in the Western Australia State Government. 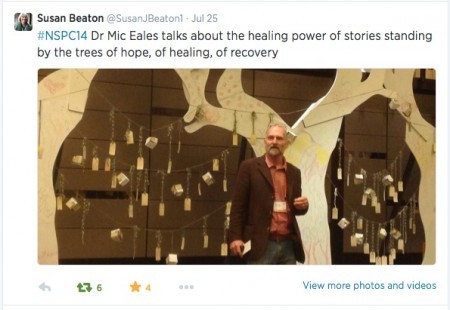 (For more information on preventing suicide in Indigenous communities, check these reports by Summer May Finlay from the Healing Foundation’s recent Cultural Solutions forum.)

The conference also heard about the US research agenda in suicide prevention, from Dr Jane Pearson, who chairs the National Institute of Mental Health’s (NIMH) Suicide Research Consortium – more information about this work is here. 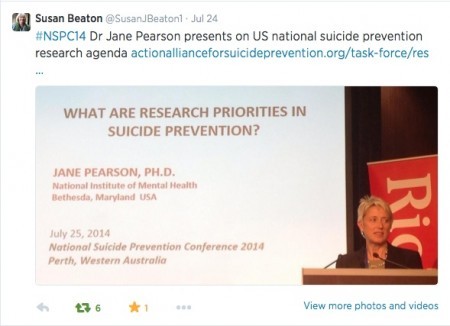 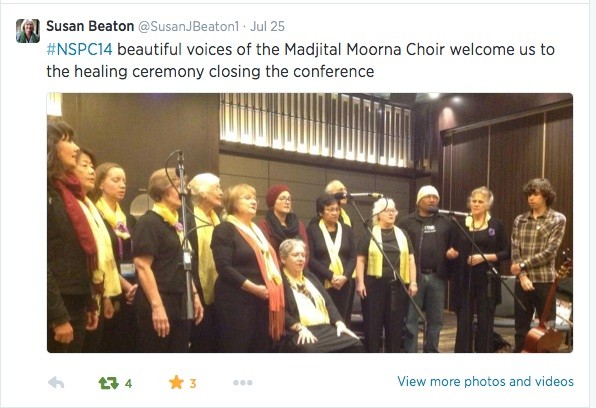 PrevPrevious“We have a voice, and people are listening” – wrapping #IPCHIV14 and #AIDS2014
Next2014 the year of the co-payment: lessons from the NHSNext