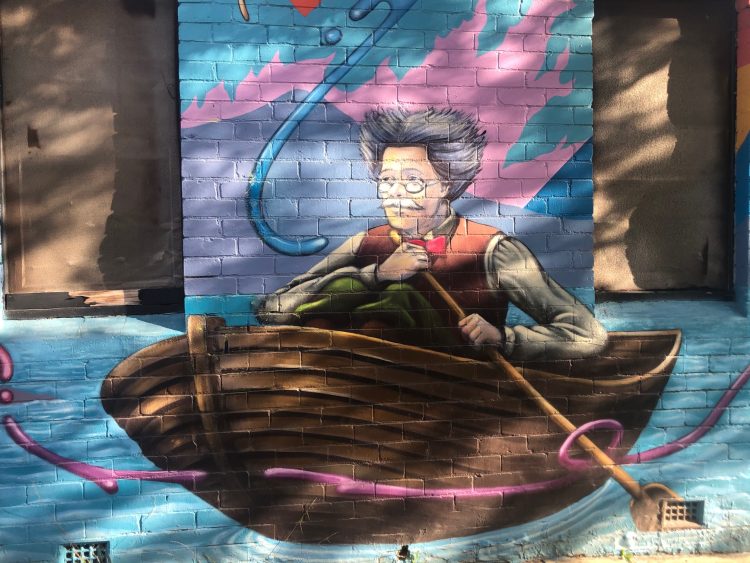 Victoria is at the “sharp end” of mental health reform and must be as ready as possible so that it does not squander the opportunities about to unfold but can make the most of them, a webinar hosted by hosted by Mental Health Victoria and the Victorian Healthcare Association heard recently.

Croakey journalist Marie McInerney covered the event for the Croakey Conference News Service and reports on the discussions below. You can also read a Twitter thread of #MHReform here.

McInerney also covered an earlier session in the webinar series on lived experience: you can read her report here.

Victoria’s mental health system is on the cusp of monumental change but the sector has been warned to expect external and internal frustration with the pace and scale of change and urged to not look for a “rescue party” or rely on buckets of money to deliver a transformed system on their behalf.

“I think there is a tendency to look to the rescue party over the hill that will save us all from what we think is wrong,” Shearer told a Victorian webinar on implementation of mental health reform hosted this month by Mental Health Victoria, the Victorian Healthcare Association and Deloitte Access Economics.

“There is not someone coming to make this happen, it is us (who have to do so),” she said. 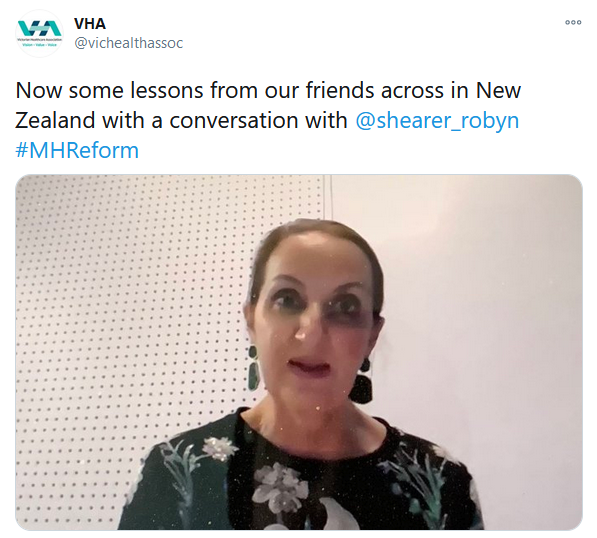 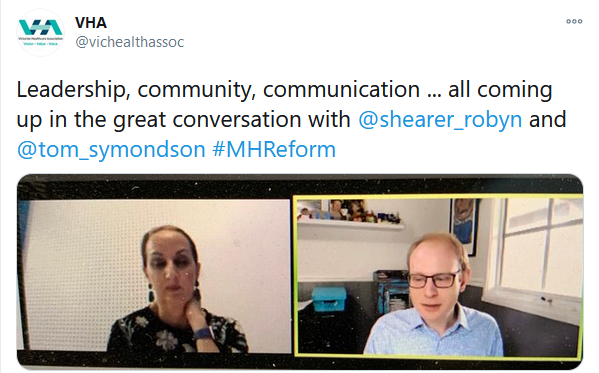 Shearer was invited to the #MHReform webinar to talk about New Zealand’s experience in reform, given it is about 12 months further down the path than Victoria.

Victoria has this year been implementing a number of practical reforms, including via the creation of Mental Health Reform Victoria, which were recommended in the interim report of its Royal Commission into Victoria’s Mental Health System.

The Royal Commission’s final report will be handed to the State Government on 5 February 2021, but mental health reform is not confined to the state or to state changes.

The national mental health sector is also waiting on the final report of the Productivity Commission inquiry into mental health, which was handed to the Federal Government on 30 June but not yet been released and was not factored into the 2021-21 Federal Budget, as many had hoped and expected.

Its release is expected any day now but required by early December.

Having promised to implement its Royal Commission’s findings in full, the Victorian Government on Thursday announced its 24 November State Budget would include $868.6 million to deal with the ‘twin wicked challenge’ of a broken mental health system and the impact of the global pandemic — welcomed by Mental Health Victoria as a “downpayment” for next year’s full report.

But Shearer, former CEO at Te Pou o te Whakaaro Nui, a national centre of evidence-based workforce development for the mental health, addiction and disability sectors, told the webinar that while significant financial investment is critical to mental health reform, it’s not the panacea to all issues when transformational changes is required and ordered.

New Zealand’s He Ara Oranga report found the system there was “under pressure and unsustainable”, with escalating demand for specialist services, limited support for people in the community and difficulties recruiting and retaining staff and unmet needs and poorer outcomes for particular groups.

They were particularly so for Māori — who the report found are subject to much greater use of compulsory treatment and seclusion, and for Pacific peoples, disabled people, LGBTIQ communities, prisoners, and refugees and migrants.

Also regarded as presenting a ‘once in a generation’ opportunity for change, as is Victoria’s Royal Commission, the report noted a striking degree of consensus in New Zealand society for an emphasis on wellbeing and community, with more prevention and early intervention, expanded access to services, more treatment options, treatment closer to home, whānau- and community-based responses and cross-government action.

The New Zealand Government’s commitment to that change was clear in the $1.9 billion allocation for mental health and addiction in the last national budget, but that level of funding “comes with some inherent tensions in seeding expectations that are not able to be quickly met”, Shearer said.

That includes where government may think it’s easy to roll out a new program to give better service options and don’t understand you “can’t just find people to suddenly deliver those new options to people” or there may be difficulty integrating new services with current programs.

But it’s not just government. Expectations also need to be managed within the sector and the community amid excitement about announcements of funding that can turn to frustration or concern: ‘This is fantastic. Where is the money now? Why isn’t that happening? Why isn’t it happening quickly enough?’, she said.

“It’s not just throwing money at the problem, there is the whole leadership and system transformation process that needs to occur,” she said. That includes having a well-developed framework and evidence base, and strong communication and engagement via skills that may need to come from outside — in her case at times with New Zealand’s chief COVID-19 communicator Dr Ashley Bloomfield.

“It requires really determined leadership at all levels and you need champions who are going to be on the journey, sharing learning and also working with you through some of the mistakes that will inevitably, inevitably happen,” she said. “Life is not perfect or ever smooth sailing.”

Shearer said her department had focused on four priorities for the past year:

The COVID-19 pandemic had been a major interruption but it had also allowed a lot of trial and innovation around education, digital tools and policy approaches, enabling her team to “use the opportunity to try some new options for people and have a much stronger focus on wellbeing”.

The cross winds of a pandemic

The silver lining of COVID-19 was echoed by others in the webinar, including Mental Health Reform Victoria CEO Pam Anders.

She said the new agency, which has been rolling out the Royal Commission’s interim recommendations, looked to take a systems approach through 2020: “how do you think and work with complexity, all of this within the cross winds of a pandemic”. 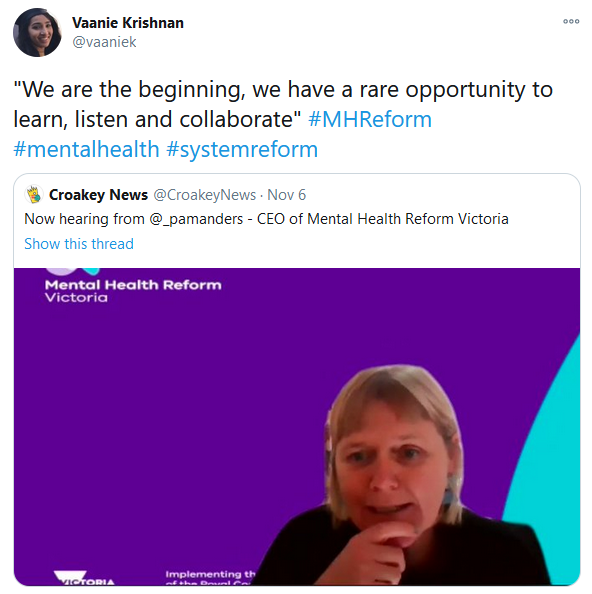 Anders said COVID had defined much of 2020 for people in Victoria, personally and professionally, creating different pressures and different risks in different parts of the population.

But, she said, it had also seen “an incredible amount of agility and ability to scale innovation across the sector”, for example through the mainstreaming of telehealth services, increased collaboration and localized responses, and the rollout in a record four weeks of 15 ‘pop-up’ mental health clinics across Victoria.

“Whilst COVID has amplified many of the reasons why we have had an inquiry (into the mental health system) at the state level, I think it’s also demonstrated simultaneously that capability of the sector to reform and to transform,” she said.

Also at the forum, Victoria’s Mental Health Complaints Commissioner and the Disability Services Commissioner Treasure Jennings urged an overall focus on co-design, saying she is concerned that the voice of lived experience and the efficacy of people with disability to press for co-design in services is more advanced than the mental health sector and noted that Australia has a less developed lived experience workforce than other comparative nations. 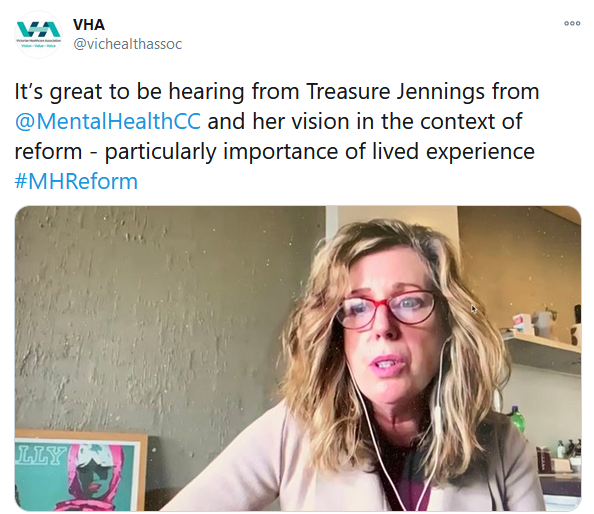 Jennings predicted the Royal Commission would recommend expansion of the peer support workforce, but warned the sector it would need to address a number of barriers, such as inconsistency of development across services, reasonable accommodations, credibility, and career pathways.

Having taken up the position in July 2020, Jennings said she was pleased to have inherited “a very well-formed lived experience strategy and framework” – Driven by lived experience– beginnings, present & future from her predecessor Dr Lynne Coulson Barr, and saw an early opportunity in her work ahead to support mental health services to “better develop their own internal complaint handling skills, especially at the coalface of those services”.

Mental Health Victoria CEO Angus Clelland said the forum was held to inform a “capstone” policy paper to be put to the Victorian Government on how best to implement the Royal Commission reforms, aiming to avoid the risks often involved with major reform processes, where they can “lose momentum, they can make mistakes, and they can leave people and communities behind”.

“We are absolutely committed to making sure that that doesn’t happen…and to make sure that we’ve learned the lessons that have been learned from other reforms, and of course from our colleagues from overseas,” he said.

Notes from the breakout sessions 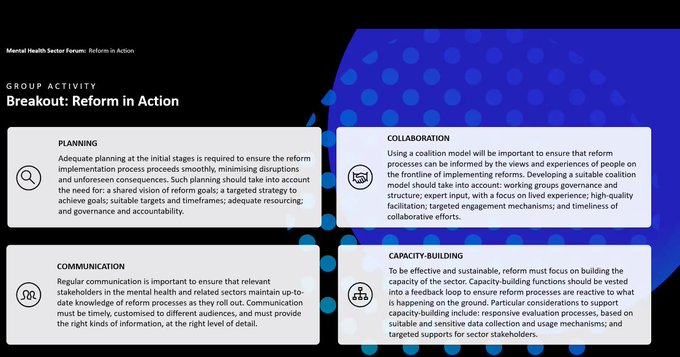 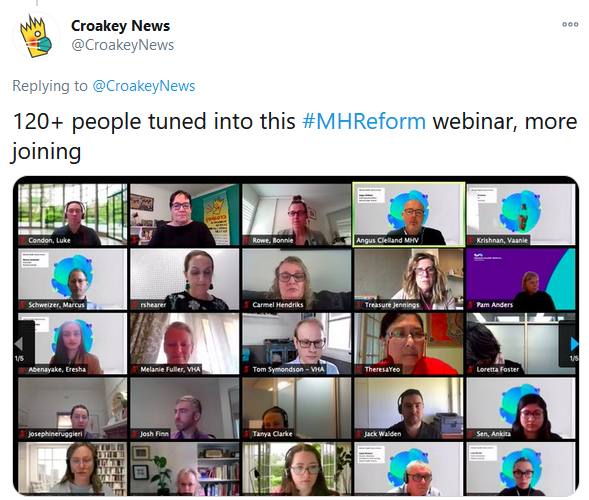