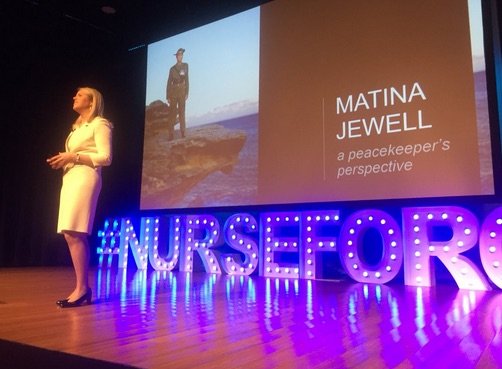 Lessons from the battlefield – a rousing presentation to #Nurseforce

While it may seem a long way from commanding a UN convoy under fire in Lebanon to daily practice in primary health care nurse settings across Australia, Jewell’s lessons of resilience, strength and courage clearly resonated with the audience.

Journalist Marie McInerney, who is covering the event for the Croakey Conference News Service, reports below on Jewell’s battles, including with her own government for health cover and recognition after a tragic ending to her UN tour.

Retired Australian soldier and UN peacekeeper Major Matia Jewell credits two important experiences with helping to her to survive when the 2006 Lebanon War broke out between Israel and Hezbollah and she had to lead a UN convoy to safety under fire.

The first lesson came when she was deployed by the Australian Army on operations in the Middle East after the September 11 attacks in New York and Washington.

Working with US Navy Seals, she was tasked to run operations with Kuwaiti special forces soldiers who, she said, “could not get their heads around” the idea of a woman being permitted to serve in the military, much less to command an all male team.

They had a very polarised response, she said. “Half of them would literally spit at the ground in front of me, turn their backs, not look at me, not speak to me, sure as hell not take orders from me. The other half, they wanted to marry me.”

It was, she said, the first time in her career where her culture and gender posed limitations for her leadership, and she ended up having to authorise one of her soldiers to pass on her decisions to the Kuwaiti soldiers.

Some years later, back in the Middle East with the UN, she decided she had to give herself new skills to have a better chance this time. So she learnt Arabic.

“That language skill made me a better peacekeeper and leader on a day to day basis,” she said. She was able to have critical face-to-face conversations with local mayors and muftas in Syria and Lebanon about minefield clearances and vital humanitarian aid distribution.

“It was vital I did have a voice I those conversations. But as a white woman, I would not have been invited in the room, let alone to sit at the table, without those language skills.”

It was, she said, a lesson for her – and one that she says can apply to very different settings – about the need to identify what we might face in future “and to set about ‘future proofing’ ourselves and our organisations, to give us the best chance to be on the front foot”.

And she said her Arabic skills would later save her life when she came under fire in Lebanon, allowing her to get directions for a safer route out from a local policeman.

The second lesson, she said, was when she learnt to ‘fast rope’ out of a helicopter – a skill she needed to take up the appointment as head of an assault team.

It was not just a huge physical challenge, of strength and endurance, but more importantly a mental challenge, she said. “Because I am absolutely terrified of heights”.

But she said it taught her to face fear, and not to place limitations on her capabilities.

“It is 100 per cent normal for us to face fear, when we are looking in the face of a big challenge or going through big changes. For me, being able to continue operating in the face of fear was a vital skill I needed to survive in that war.” 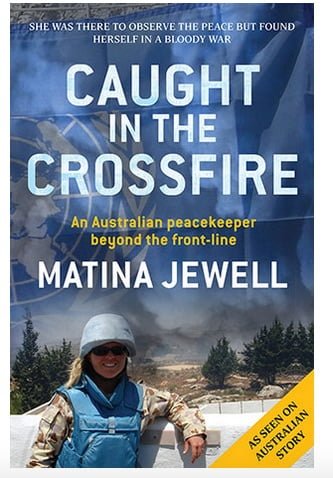 It’s little wonder that Jewell, author of Caught in the Crossfire: an Australian peacekeeper beyond the frontline is currently looking forward to a movie being made of her life.

It’s also little wonder that she’s in high demand as a public speaker, able to translate the experiences of being caught up, unarmed, in a full-scale war with tragic consequences into clear lessons on resilience and strength for other professions and organisations.

Jewell is also, she says, the epitome of why the most effective teams need to have leaders at every single layer of their organisation, not just those who have ‘leader’ in their job title.

This is because, she says, “in every career is a time when we’re called upon to step up, to lead, even when it is not our responsibility.”

In 2006, Jewell was the only Australian and only woman on the UN patrol base Khiam on the border between Israel and Lebanon when the 33-day war broke out.

Having already, with her UN colleagues, survived over 50 near misses from Israeli bombs and artillery and Hezbollah rockets, she had been due to go to Egypt on holiday, ahead of returning home from her tour.

Instead, she was called on to command a convoy of UN vehicles to safety on a road that normally took two hours to drive, but on this horrendous journey took two days, under heavy fire.

Against many odds, they made it to safety, but she was badly injured when a sudden evasive manoeuvre threw her into the bullet-proofed window of their armoured vehicle, breaking her back in five places and ending her career. Days later, her fellow peacekeepers at the Khiam base, whom she regarded more as brothers than colleagues, were killed in another assault.

There were, she said, many different lessons in those days and weeks to come.

There was the comfort, before the accident, of knowing that she had the full support of the UN command hierarchy in the choices she made to steer the convoy to safety.

That was the benefit, she said, of working in a culture that fully supported and empowered people in decision making processes rather than becoming, as so many organisations do, risk averse.

But she was also a casualty of many failures too, including having to lie for two days on her back, on a tiled floor, without pain relief, while the UN scrambled to evacuate her – its plans and backup plans having failed.

And she was devastated by the failure of any of her commanders to contact her about the deaths of her Khiam colleagues. “All the information I received via the media, on CNN”.

“Don’t ever forget your people,” she told delegates.

And there were more battles to come – with the Australian Government, over both her health cover and war service recognition, a “long, drawn out battle that took many years”, and also for her mental health, when she “hit absolute rock bottom”, fighting depression, survivor guilt, and post traumatic stress disorder.

Eventually, she found new purpose, including wanting to make sure that “no Aussie soldier had to endure what I had”.

She was appointed to the Prime Ministerial Advisory Council on Ex-Service Matters (PMAC), advocated for injured soldiers, and was Ambassador of the Australian Peacekeepers and Peacemakers Veterans’ Association. Her book, she says, has helped lead to changes at the UN “which I know will save lives”.

What Jewell now has taken away from all those different experiences, she told the conference, is to “never underestimate the power of my own voice”.

“I think sometimes as individuals we think we’re not capable of effecting change on large industries or organisations but our voices can be a ripple that goes on to be a tidal wave of change,” she said.

“Even out of great adversity can come incredible opportunities, just so long as we have the courage to pursue them.”

Jewell asked the #Nurseforce delegates to consider: “What is your purpose? What is in your life, your team, your organisation, that is really worth fighting for?” 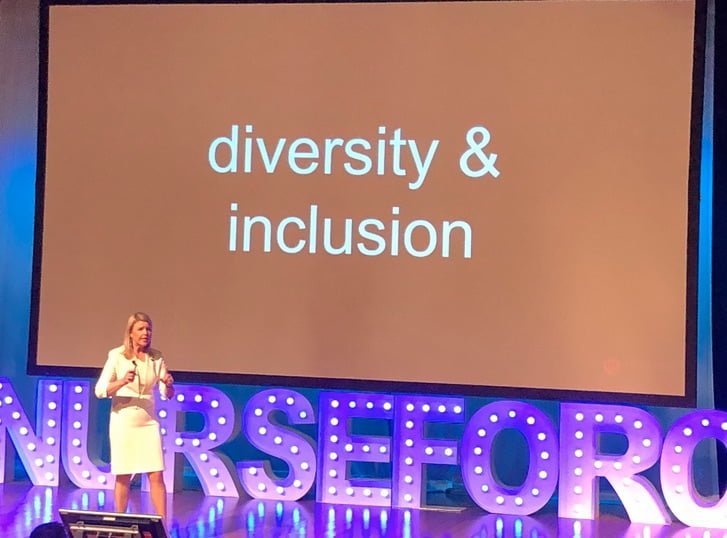 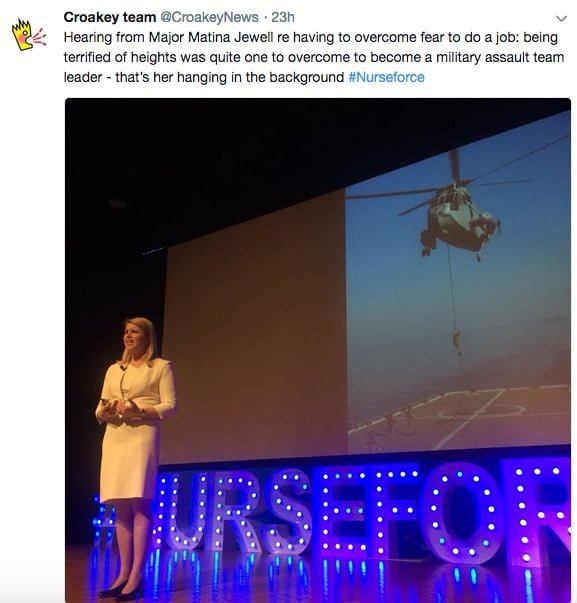 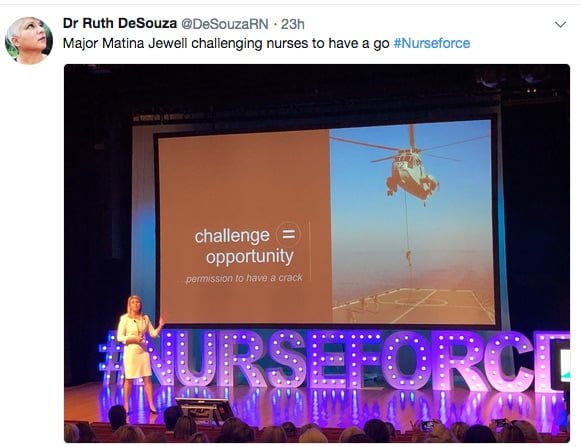 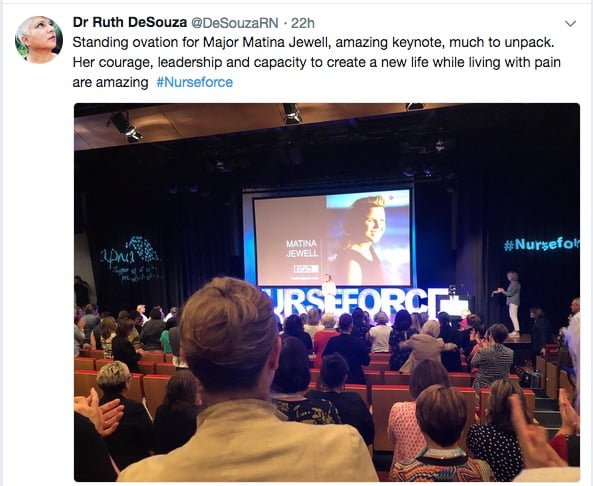 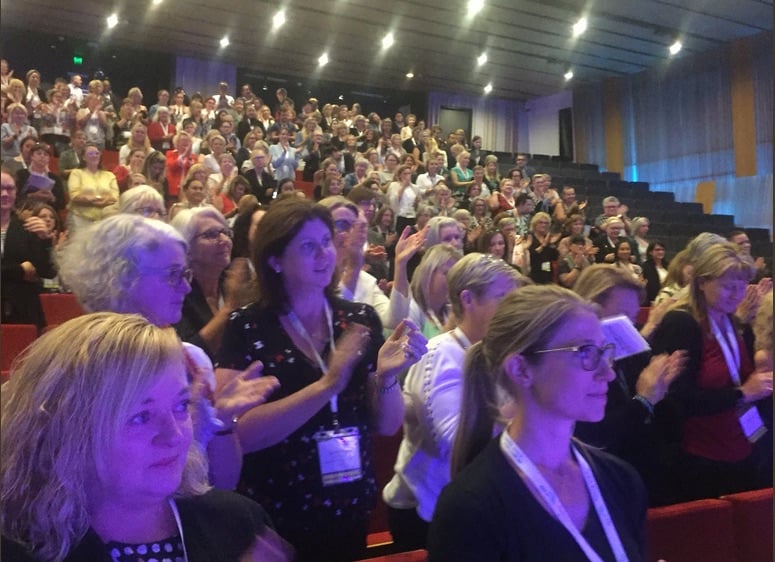 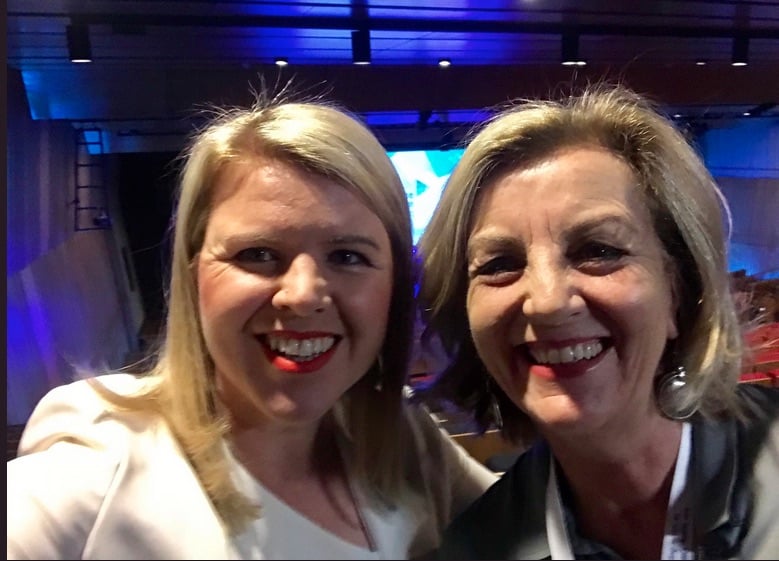 Marie McInerney is covering the #Nurseforce conference for the Croakey Conference News Service. Bookmark this link to follow our coverage.

PrevPreviousCould shock campaigns reverse obesity in Australia? Research says yes
NextChildren stand together with three-year-old in detention, on her birthdayNext