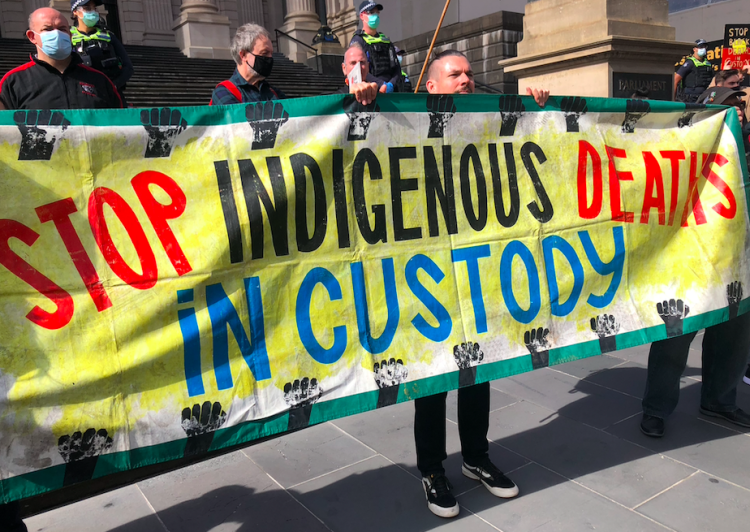 #EndBlackDeathsInCustody rally in Naarm/Melbourne to mark 30th anniversary of the Royal Commission into Aboriginal Deaths in Custody: Photo by Marie McInerney

Lessons from the Royal Commission on deaths in custody still unheeded

** Warning: Aboriginal and Torres Strait Islander readers are advised that this story includes the names of people who have passed away, and discusses sensitive issues such as deaths in custody**

Introduction by Croakey: The Aboriginal Legal Service NSW/ACT today confirmed “with great sadness” the recent death in custody of Frank ‘Gud’ Coleman, a 43-year-old Ngemba man born in Brewarrina and raised in Mt Druitt, who died on 8 July at the Long Bay Correctional Complex.

In a statement, the Service said it and Coleman’s family are demanding answers, saying there has been no determination of cause of death and that the family’s grief was compounded by the fact they had not seen him in person for about 18 months, largely due to COVID restrictions.

“We understand he didn’t have any visitors for several months and that’s an agonising period of time to go without any physical contact with your siblings, your parents, your children,” his former partner Skye Hipwell said in the statement.

“Frank always said he was not a free man, he was living under a white man’s law, and it breaks my heart that he died not a free man. He died alone in a jail cell and no one knows anything about his last minutes,” Hipwell said.

According to Guardian Australia, Coleman’s is the fourth Aboriginal and Torres Strait Islander death in custody since April, which marked the 30th anniversary of the Royal Commission into Aboriginal Deaths in Custody and the ninth nationally since the start of this year.

Associate Professor Megan Williams, Research Lead and Assistant Director at the University of Sydney’s National Centre for Cultural Competence, and co-chair of Croakey Health Media, is leading a Twitter “hour of power” on the 15th day of each month this year to sustain focus on the need for action on Aboriginal and Torres Strait Islander deaths in custody.

See in the post below her tweets from 15 June on what the Royal Commission had to say about health issues, and where the gaps continue today.

Tomorrow (Thursday 15 July ) she will focus on:

Over the past week, justice and health advocates have also condemned Australia’s rejection of a United Nations call to raise the age of criminal responsibility from 10 to 14, made as part of the five yearly review of Australia’s human rights performance by the UN Human Rights Council.

“Governments talk about Closing the Gap on the one hand, but build new prisons and lock up children as young as 10 years old with the other,” said Cheryl Axleby, Change the Record Co-Chair.

NATSILS has also urged action on the NT Government’s punitive youth bail reforms, saying it had been “devastated but not surprised” to learn they were already having harmful and life-altering effects on Aboriginal and Torres Strait Islander children, with a week-on-week increase in youth in detention reported since the reforms were introduced in May.

“These punitive laws are capturing young first time offenders who are ending up on remand when they would not ordinarily enter into the youth detention system,” said Priscilla Atkins, NATSILS Chair and CEO of the North Australian Aboriginal Justice Agency (NAAJA).

They fly in the face of another Royal Commission — held into the Detention and Protection of Children in the Northern Territory in the wake of abuses at the Don Dale detention centre, she said.

“It is tragic to see the same failures of a broken system that the Royal Commission sought to reform.” 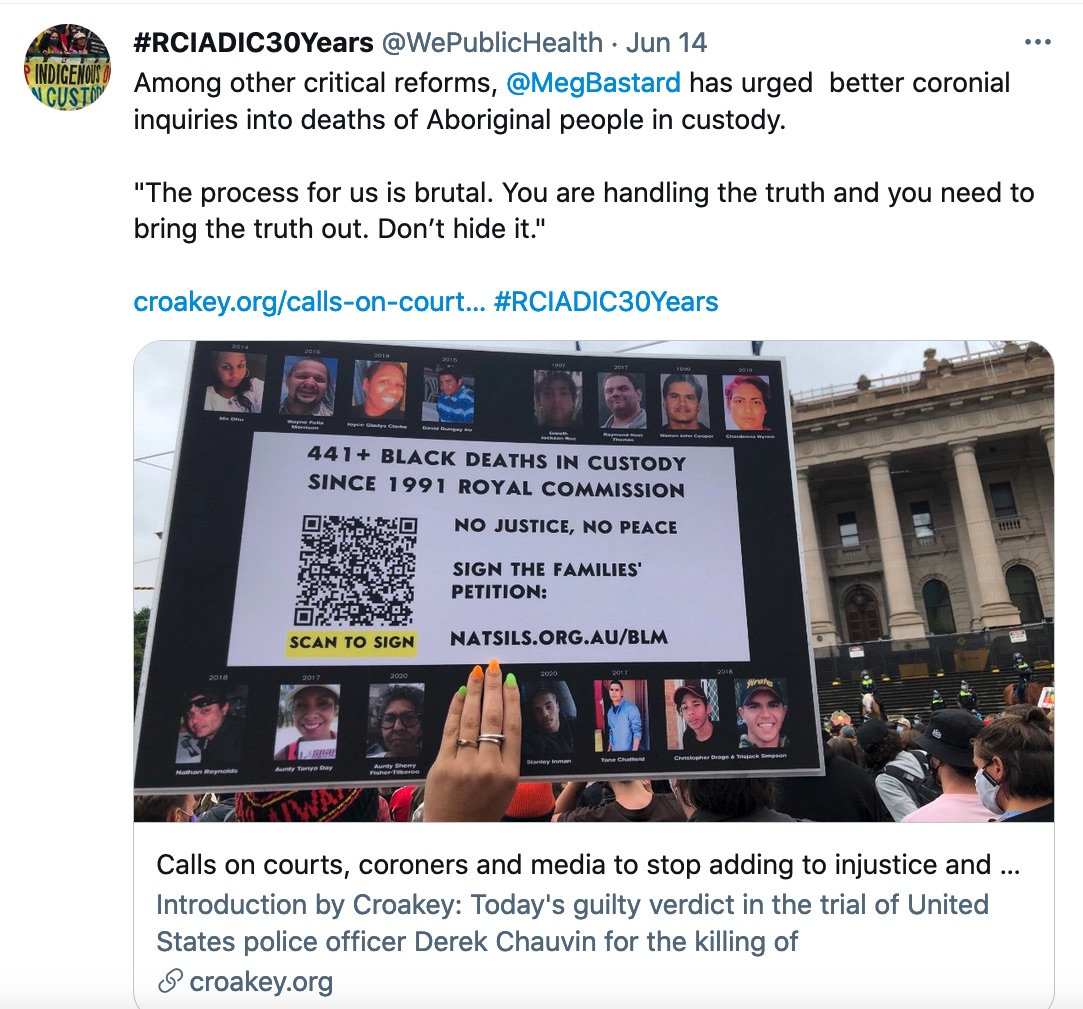 Being the 15th of the month, let’s put an hour into understanding recommendations of the Royal Commission into Aboriginal Deaths in Custody released 15 April 1991 #RCIADIC30Years

Key points #RCIADIC30Years: in my read, over 20 RCIADIC recommendations say how Aboriginal health services could self-determine improvements in prison health services including health planning and examining delivery of medical services to people in police custody (127) and hospitals (252)

Other #RCIADIC30Years recommendations to improve health and safety of Aboriginal and Torres Strait Islander people in prisons are reviewing and guiding prison health standards, including on cultural matters (152). Imagine that!

#RCIADIC30Yesrs recommended “funding arrangements necessary for them [then called Aboriginal Health Services] to facilitate their greater involvement” (127). That hasn’t occurred.

Why state health departments don’t and can’t meet health care and safety needs of Aboriginal and Torres Strait Islander people in prison nor rights including to cultural care, self-determination and equivalent care in prison as in the community

PrevPreviousWe’ve had enough! The pandemic response is a mess and needs community leadership
NextThe NDIS is fighting a trust deficit. Its future depends on putting this rightNext