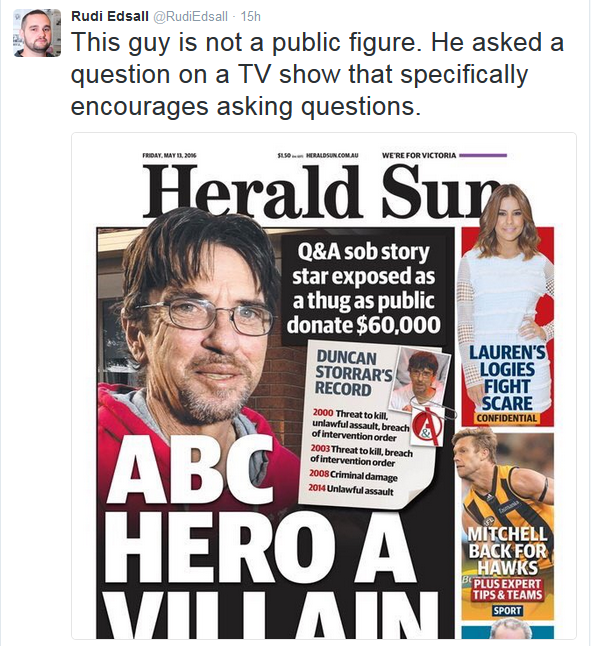 Let’s debate the fairness of our tax system, not Duncan Storrar *UPDATED*

It’s likely that Victorian Council of Social Service (VCOSS) CEO Emma King is speaking for many Australians in this post below, cross-published here with permission from the organisation’s  Facebook page. It follows the front page treatment (feature image above) given to Duncan Storrar in today’s Herald Sun after he rose to national prominence with his question about tax equity on this week’s ABC Q&A program. 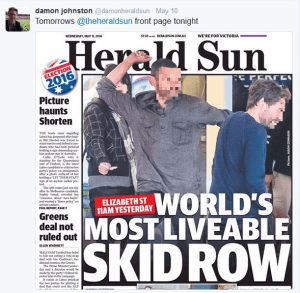 Earlier in the week the Herald Sun also attracted criticism and concern with a front page story and series of photos about “aggressive beggars picking fights with pedestrians” – we have pixilated the twitter pic (right) which critics, like ABC 774 Morning host Jon Faine have said the Melbourne newspaper should at least have done.  VCOSS tweeted then: “The best way to address homelessness is to attack its root causes, not publicly humiliate its victims.” See also this response by the Council for Homeless Persons (CHP).

“If you put yourself on the public stage, particularly in the middle of an election campaign, questioning government policy… I think you’re entitled to be subject to a bit of scrutiny.”

The exchange is very much worth a listen, particularly at this point in the federal election campaign.

See also this piece:What the Duncan Storrar controversy teaches us about debating people over policy

There has never been a more dangerous time to be an Australian. Just ask Duncan Storrar.

We now live in an age where simply having the temerity to ask a Government MP a question about tax relief makes you fair game for public ridicule. After his appearance on Q&A, some have elevated Duncan to the status of a national hero. But Duncan didn’t ask for that. Others have sought to tear Duncan down. He certainly didn’t ask for that.

They say never to pick a fight with somebody who buys ink by the barrel. And that may be true. But all Duncan did was ask a question.

The truth is this isn’t about any individual. A federal election is upon us and every minute we spend debating whether or not Duncan is a good bloke is a wasted minute.

It’s 60 seconds we’re not discussing the future of fairness in our country or how to make our tax system more equitable.

Instead of dissecting Duncan’s life, we could be discussing that in Victoria alone we currently have more than 650,000 people living in poverty. We could be musing on the fact that, of these, almost one third are earning a wage but it’s just not enough to pay the bills.

We could be outraged that 22,000 people are homeless in Victoria

We could be discussing how entrenched social disadvantage is mighty difficult to fix, because social problems are complex, with multiple, interrelated causes.

And, specifically, we could be discussing proposed changes to Australia’s tax regime. And how such changes might affect those who are doing it tough.

So why don’t we focus on the issues? That is what Duncan asked for. 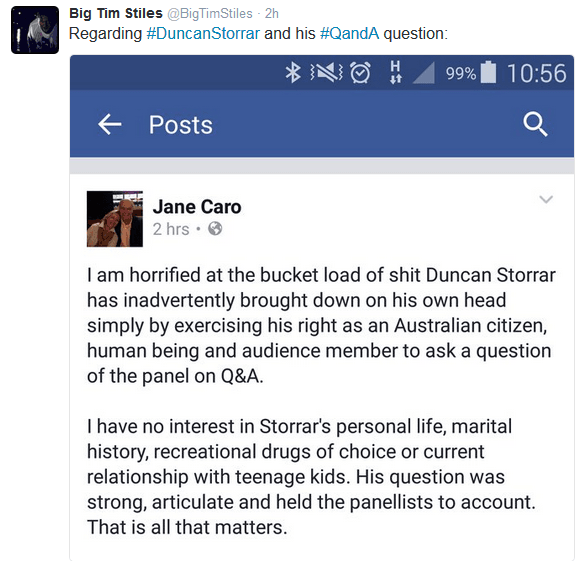 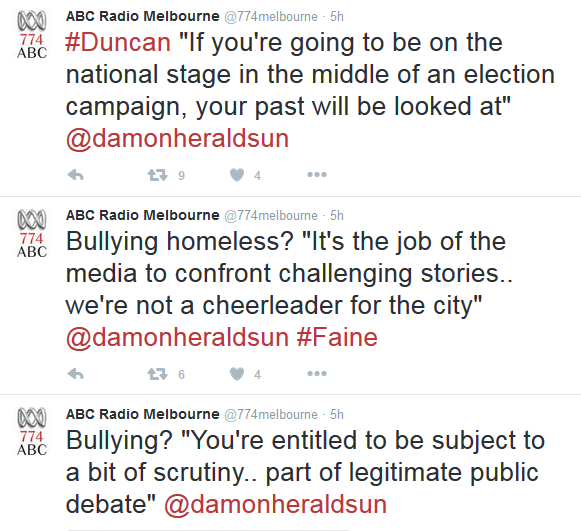 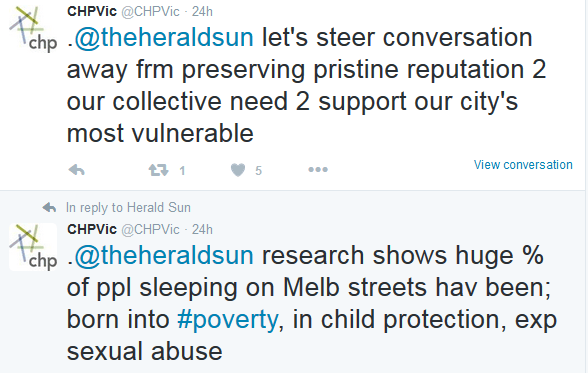 A coalition of more than thirty community leaders, commentators and thinkers in civil society, including representatives of disability organisations and not for profits, eminent individuals, union and association leaders, and other commentators, this morning released a “National Civil Society Statement of Concern” about the media treatment of Duncan Storrar. The statement, which underscores the right of any member of the public to ask questions, the job of the media to report them, and the responsibility of parliamentarians to protect our ability to do so, is reproduced below. It can also be found here.

PrevPreviousSmoke & mirrors or harm reduction breakthrough? A compilation of verdicts on electronic cigarettes
NextRevealing the top reads at Croakey in AprilNext