A stack of health-related inquiries and reports have been released that may be of interest to Croakey readers. Plus, some human rights ranting to follow…

• The second interim report of the Senate Select Committee inquiring into health policies raised concerns about the damage being done to primary health care by Federal funding cuts. Cuts to the Flexible Funds will also hit many services, programs and organisations, according to evidence presented by the AHHA’s Alison Verhoeven.

On related, The Mandarin has a most interesting story about a stoush over NSW health executives being directed not to attend a local hearing of the Committee.

• An inquiry has released its report into the “Adequacy of existing residential care arrangements available for young people with severe physical, mental or intellectual disabilities in Australia”.

• Dr Lesley Russell from the Menzies Centre for Health Policy published an investigation of “Indigenous Provisions in the 2015-16 budget” and concludes:

“Despite the need and the promises, Commonwealth funding for Indigenous Affairs as a percentage of both total outlays and GDP is in decline. And it is disconcerting to see Indigenous voices and input into decision-making being side-lined. Indigenous groups and spokespeople have called the government on the absence of real engagement and consultation – something which has long been recognised as the key to failure or success in Indigenous affairs.

…. What emerges most strikingly from this year’s Budget analysis is that little has been done over the past twelve months to assess the implications of commissioned reports and reviews, to capitalise on the restructure and realignment of Indigenous programs, to develop promised new policies and to roll them out. All that has been done to date is to shift responsibility for programs to the Department of Prime Minister and Cabinet and to rebrand programs that may or may not be effective. It’s a policy-free zone, where ad hoc decisions are the norm and budgets continue to be constrained in ways that limit the effectiveness and reach of programs and services.

There are a number of examples where program funding has been provided at the expense of other needed programs – taking $11.5 million from Indigenous Safety and Wellbeing programs to reverse funding cuts to the Indigenous Legal Assistance Program is perhaps the most egregious example. There are also concerns that proposed changes to mainstream programs such as increased co-payments and safety net threshold in health, reduced Commonwealth funding for public hospitals, increased costs for higher education, and changes to the collection of census data will have a disproportionate impact on Indigenous Australians.

Small wonder then that most Closing the Gap targets remain out of reach and the sector is struggling to keep programs functioning and retain staff.”

• The House of Representatives standing committee on Indigenous Affairs released recommendations to tackle the harmful use of alcohol in Aboriginal and Torres Strait Islander communities (more on this will be published at Croakey soon).

• A Senate Committee inquiry into treaties, Blind agreement: reforming Australia’s treaty-making process, said there was a need for more transparency and consultation, as well as independent analysis of treaties.

But perhaps the most profound message from recent events is the centrality of human rights to any discussions about health. It’s very difficult to ensure the conditions for good health, or to provide good healthcare in the absence of respect for human rights.

Yet this week, the Federal Government and Opposition united to oppose the reporting of abuse of children in immigration detention, amongst things, prompting this series of tweets from Dr Andrew Weatherall (a doctor who cares for children): 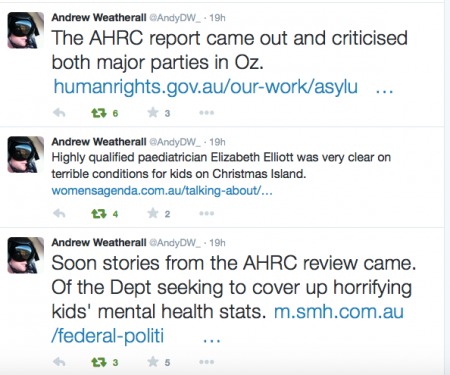 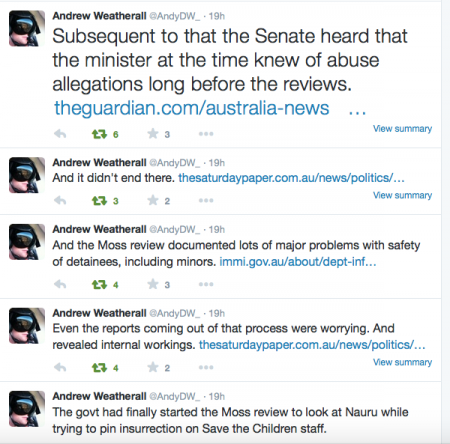 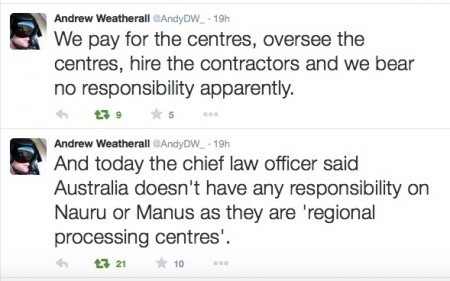 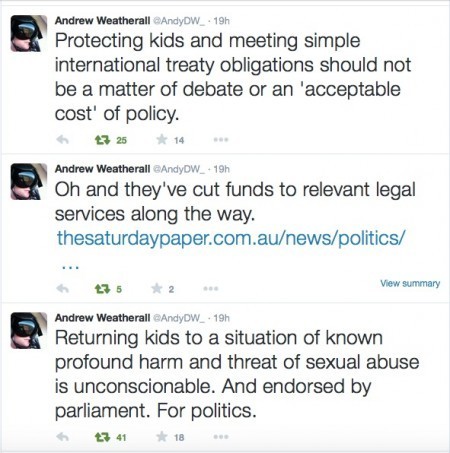 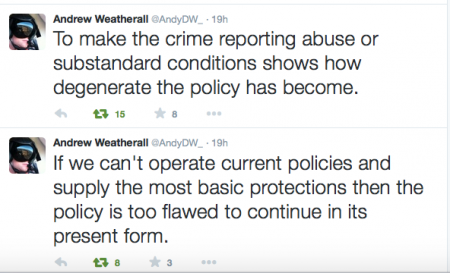