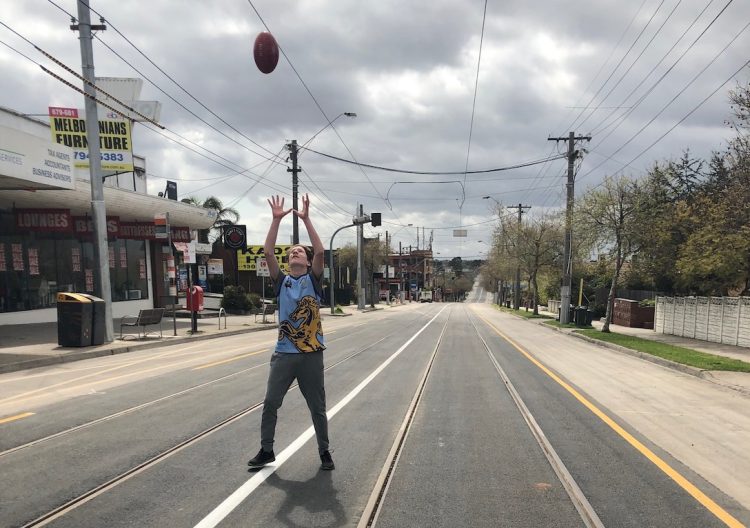 Living locally and reclaiming the streets: what are the health equity considerations?

VicHealth is putting the spotlight on local communities and urban design this week as part of its Life and Health ReImagined initiative.

Join the webinar discussions from 2pm AEST on Thursday, Streets for people –  lessons from a return to local living.

Marie McInerney previews the discussions below for the Croakey Conference News Service, which is covering the #HealthReImagined discussions over five weeks of webinars.

The coronavirus lockdown transformed many cities around the world, resulting in more liveable, walkable, connected neighbourhoods, with streets reclaimed from cars and millions of people working from home – at least for a time.

But, as cities seek to reopen, urban planners are warning of the risks to health and the environment if people now retreat to the “bubble” of their cars to avoid COVID-19 and if new urban design strategies overlook deep inequities facing people in poorer communities.

A paper written for a VicHealth webinar this week says that “sticking close to home” became the new normal in Australia during the weeks of lockdown.

Car traffic numbers plummeted, with an estimated 88 percent cut in Melbourne car trips in March, while bikes were reported to be “the new toilet paper”, with soaring sales and numbers of cyclists dramatically up – on one Melbourne bike trail by nearly 800 per cent in April, it said. (A similar trend has also been reported in NSW).

“Many people have realised how great it is to walk and cycle through the COVID experience, and they’ve come to appreciate local parks and local areas,” said RMIT Professor Billie Giles-Corti, one of the authors of the paper.

“We should capitalise on that,” she told Croakey, saying the return to local living is highlighting the importance of creating 20-minute neighbourhoods, a Melbourne goal for 2050, where people can live locally, in “villages” that meet most of their daily needs within a 20-minute walk from home,

Giles-Corti, who heads the NHMRC Centre of Research Excellence in Healthy Liveable Communities, will be a panelist on Thursday’s VicHealth webinar, part of its Life and Health Re-imagined series, that will focus on urban design, with the theme: Streets for people: lessons from a return to local living.

The ‘streets for people’ call is one that is resounding globally in the wake of pandemic lockdowns, which saw streets retrofitted into bicycle lanes, walkways, plazas, and parking spaces converted into retail and eating spaces, and even a drive-in movie theater set up in an idle airport in Vilnius.

But the shifting urban shapes are also raising questions, particularly alongside the Black Lives Matters protests, about equity and what “local living” means to people living in poverty or on the margins.

Canadian author and urban planner Jay Pitter is talking about “forgotten densities” – communities in cities across the globe that live with ageing infrastructure, over-policing, predatory enterprises like pay day lending businesses and bottle shops, inadequate transportation options, and sick buildings – “structures that contribute to illness due to their poor design, materials and maintenance”.

“While mainstream urbanists are loudly advocating to widen sidewalks and public parks – two important but narrow points of focus – individuals living in forgotten densities are pleading to have their urgent concerns heard,” she writes.

Anna Muessig, a San Francisco urban planner who will also join Thursday’s webinar, says the lockdown prompted people to use streets “more as public spaces than as places to move in”, offering not only an outlet for public life and social connection but acting as “really critical pieces of resilience infrastructure”.

A small global survey conducted by her firm over ten days in April found that respondents were leaning on their neighbourhoods as “a crutch for maintaining their physical and mental health”.

A third stayed home except for essential trips, but those who ventured into public space “relied heavily on destinations at their doorsteps — from neighborhood streets and sidewalks to local parks and front stoops,” it said.

“Places that may have once been relegated to passing through are now places for exercising, decompressing, and socialising at a safe distance — especially for those at greatest risk of isolation and infection.”

Reclaiming city streets and getting to know local communities can also be life-saving, Muessig told Croakey.

Chicago’s 1995 deadly heatwave was a good example of where neighbours who know each other do better in public health emergencies, she said, with research showing the toll was much lower in “socially cohesive” communities, regardless of socio-economic status.

Muessig works for the Copenhagen-based urban design company Gehl, which has played a role in the transformation of Melbourne over decades into one of the world’s most liveable and likeable cities.

A big focus of her work is to get more cars off roads and more people onto bikes and scooters, so it’s been a shock for her to see how the pandemic is affecting public transport use, with even its biggest advocates scared off by the risks of infection.

“It’s really scary to see even the most dedicated urbanists jumping in their car to go to a meeting who would normally take a [tram]”, she says.

The university’s Institute of Transport and Logistics Studies researchers said government should encourage work from home as much as possible and that businesses would need to be flexible with remote working and staggered starting and finishing hours. Otherwise levels of traffic congestion could “exceed those experienced prior to COVID-19”, they said.

For Dr Jason Thompson, a Senior Research Fellow at the Melbourne School of Design and Transport, the jury is out on what the pandemic will mean longer term for public transport usage.

On one hand, amid concerns about infection risks from crowding on trains, buses and trams, more people “are retreating into their little bubbles of cars”, adding to congestion and pollution and reducing the incidental levels of walking that public transport use brings.

Thompson said this trend also raises questions about viability for public transport operators (many privately owned) which are looking to  spread out passengers physically and across timetables as well as facing more intensive cleaning costs.

“If you were thinking about investing in public transport, now is probably not the time you would be doing it,” he said.

But on the other hand, the pandemic has demonstrated to many people and businesses that work is possible and productive without necessarily having to get in a car at the same time each day and drive to the city.

That not only can mean different ways of working and travelling, but may invigorate local neighbourhoods, including seeing the return of the corner store, he said.

It’s a future that is hard to predict, says Thompson, but one thing seems certain: we are “not going to return to the same style of commuting we had before”.

Restore a rite of passage

Billie Giles-Corti and her co-author Dr Anna Timperio, from the Institute for Physical Activity and Nutrition (IPAN) at Deakin University, hope the pandemic will lead to an increase in how many Australian children walk or ride to and from school.

In 2018, primary school students in Melbourne made approximately three-quarters of journeys for education purposes by private vehicle, representing approximately 1.2 million kilometres on an average weekday, the paper says.

“That’s a lot of traffic for children to contend with around schools,” Giles-Corti told Croakey.

Some of that is due to increasing school catchments, amalgamations and low density sprawl that means many children travel far to get to school. However, the report says convenience, low parental confidence in their child’s abilities, and lower neighbourhood interactions are also to blame.

The terrible irony, Giles-Corti says, is that high rates of car use are mostly driven by parental fears that their children are not safe in traffic, so to avoid that they add to the congestion and risk.

She and Timperio want governments and local councils to capitalise on the fun and growing confidence that many families found in walking and riding around their suburbs during the lockdowns, to restore an important “rite of passage” that brings multiple health and development benefits for children.

As well as better cycling paths, they recommend a big focus on “calming” traffic around schools, including drop off zones about 800 metres from schools and trials of ‘woonerfs’, or ‘living streets’, which originated in the Netherlands, where cars, pedestrians and cyclists share the space, and traffic is slowed to a walking pace.

In the United States, the City of Portland has been a pace-setter in establishing “complete neighbourhoods” across its boundaries, to ensure the health and environmental benefits of being able to stick close to home are not confined to inner city suburbs.

It recognises that being able to “live locally” does not hold much appeal if your local area lacks amenities, you are stuck in overcrowded or poorly designed housing, or where racial profiling by police or others can make jogging dangerous.

She has seen that shown graphically in mapping that reveals “an almost complete overlap” between the low income households in housing stress and COVID-19 hotspots in Canada’s two largest cities, Montreal and Toronto, she said.

She shares growing concerns that low income people, who also disproportionately make up the ranks of low paid essential services for many cities, will also miss out in urban planning responses to the pandemic.

Whitzman welcomes the focus on 20-minute neighbourhoods in Australia, which she has also long championed, and on the physical activity needs of children and young people.

But she also urges planning advocates in Australia to apply a strong equity lens to what’s needed for “living locally” and to “amplify the voices of the kids who are less understood”.

“So, if you talk to a bunch of kids of Sudanese heritage about walking and cycling to school and they bring up police violence, listen to them. Don’t go, ‘okay, but where do you need the crossing?’”

Whitzman says that justice issues have not often been part of planning’s “wheelhouse”, but they must be “if we’re going to address the issues of safety and health and public space that people are talking about” in the nexus between COVID-19 and Black Lives Matters injustices.

These “twin discriminatory health crises” have brought about an outpouring of reflections on how planning and design must change to become more equitable in the US and Canada,” she told Croakey.

“I am on Twitter, probably too much, but I haven’t seen the equivalent self-reflection going on in Australia.” 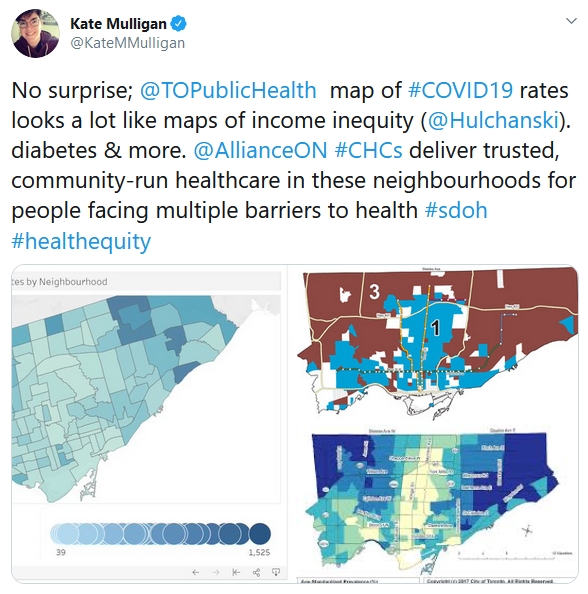 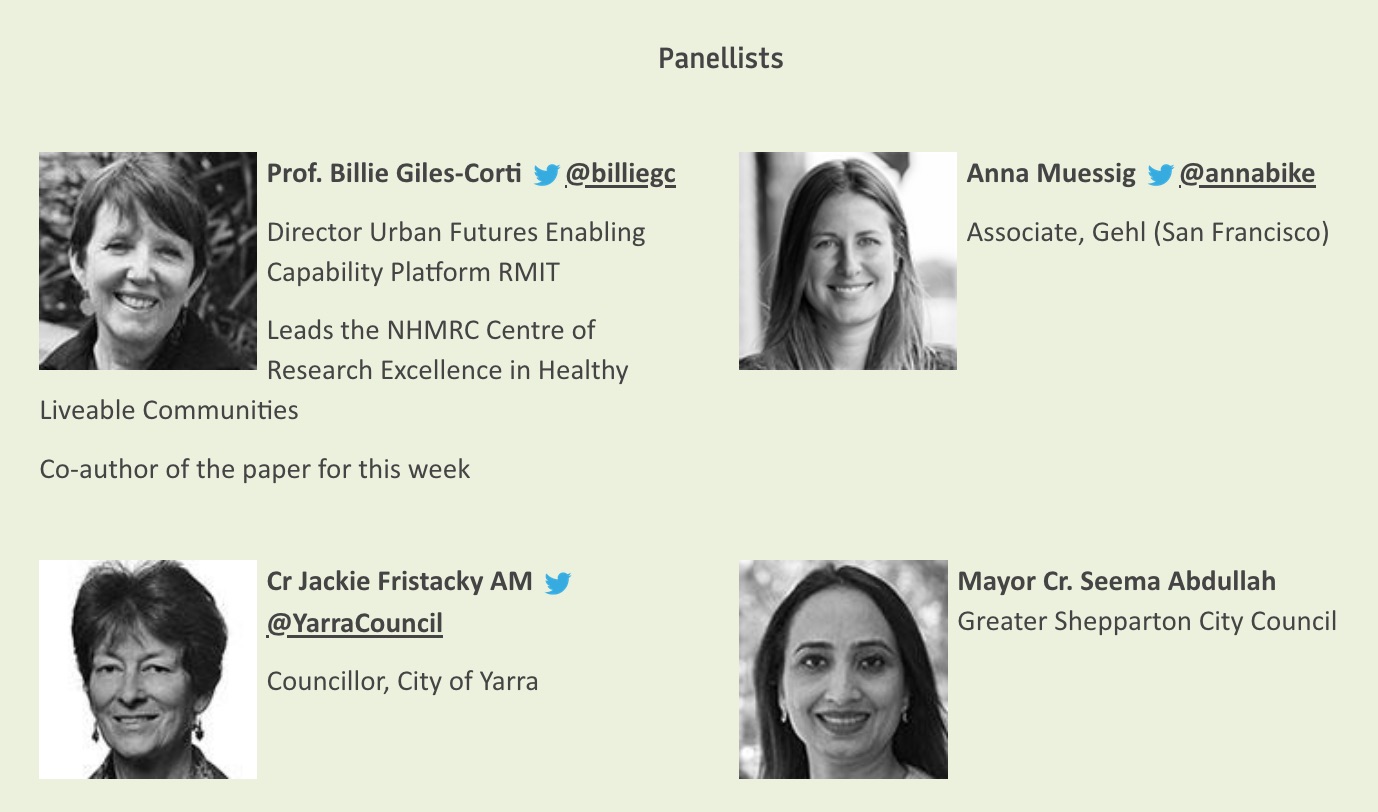 So far, 368 Twitter accounts have been participating in the #HealthReImagined discussions, sending 1,808 tweets, and creating more than 19 million Twitter impressions, according to Symplur analytics (15-29 June). Read the Twitter transcript here. 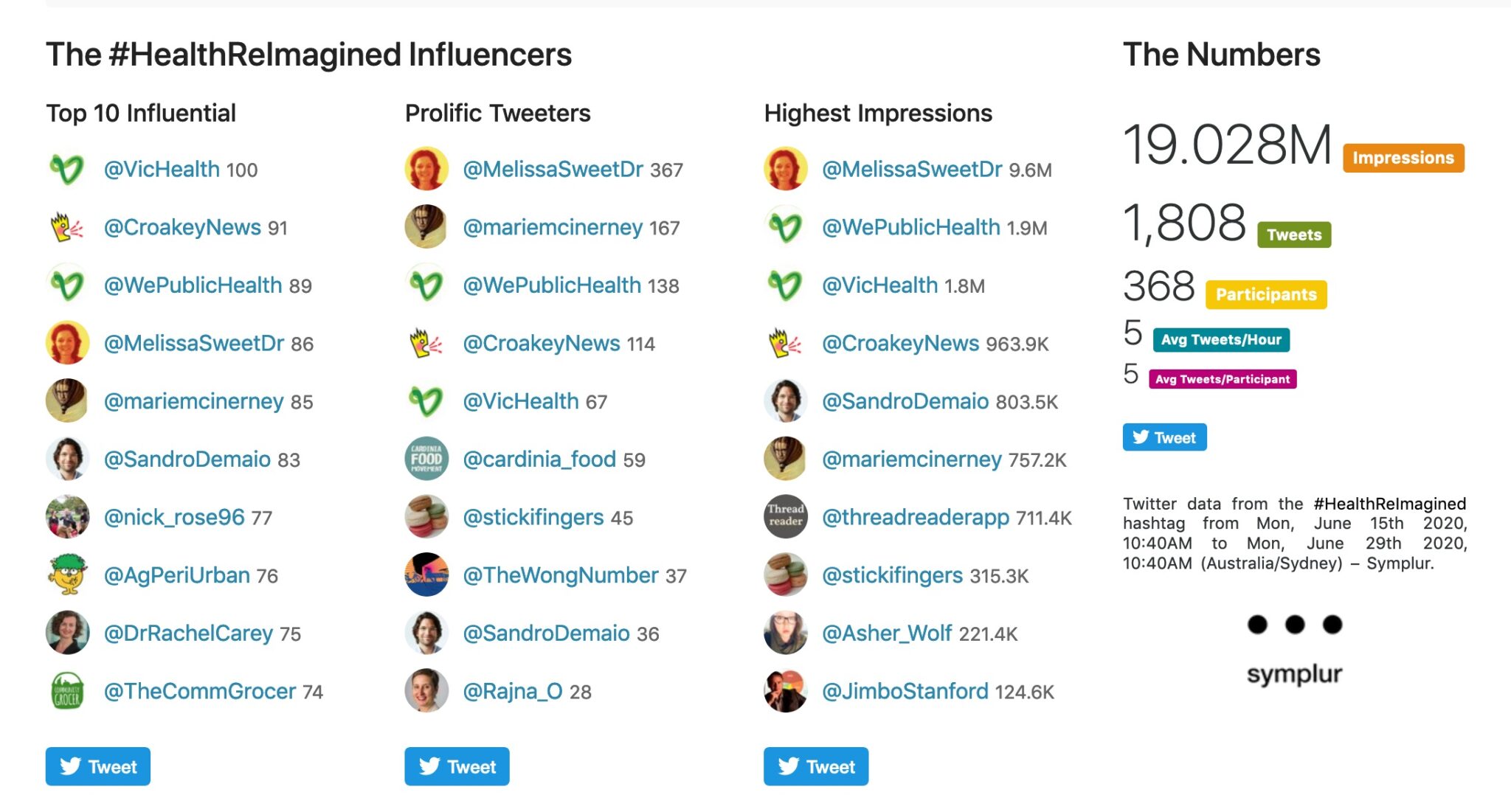 PrevPreviousFor parents, teachers and children, some resources for decolonising education
NextStanding against the slide to fascism: what can public health do now?Next