Living longer, but chronic disease toll rising: Australia’s 14th biennial health report card (and what of its own future?)

We are living longer, have lower death rates for cancer and many other diseases, and a health system that people say they are mostly happy with. But chronic diseases related to our ageing population as well as to lifestyles and health habits are taking an increasing toll.

That’s the verdict of Australia’s Health 2014, the 14th biennial report card from the Australian Institute of Health and Welfare (AIHW). As usual the publication raises lots of big issues about health care and priorities, but this year’s has another question: whether this will be the last such report card?

The Federal Government announced in the 2014-15 Budget that it would create a new  Health Performance and Productivity Commission by merging the AIHW with the National Health Performance Authority, the Independent Hospital Pricing Authority, the National Health Funding Body, the Administrator of the National Health Funding Pool, and the Safety and Quality Commission. What this will mean for reports like this (which Health Minister Peter Dutton described today as “the most comprehensive analysis of the health of Australians and their health system”) and the broader welfare functions of the Institute, remains to be seen.

Among the detailed findings of the 578 page report is a focus on Indigenous health, confirming improvements in recent years – including lower rates of death from circulatory and respiratory diseases, declining infant mortality rates and reductions in smoking rates – however still a significant gap, with Indigenous Australians more likely to die at younger ages, experience disability and report their health as fair or poor. 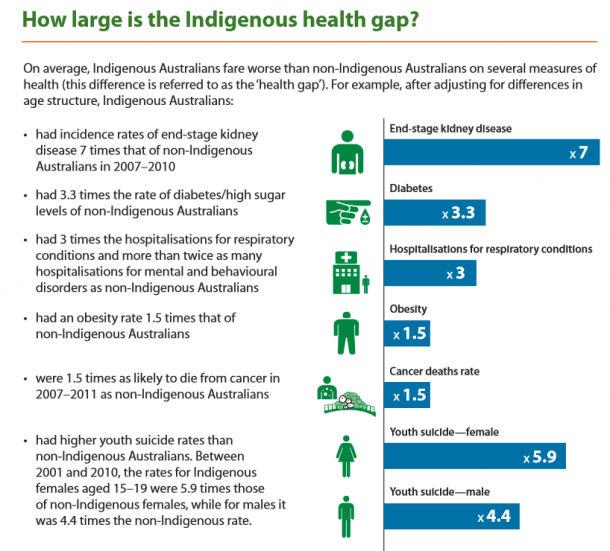 Australia’s health 2014 was released in Canberra today by Dutton, whose media release seeks to justify tough health measures in the 2014-15 Budget, including the introduction of the $7 GP copayment, by focusing on the report’s finding that total health spending in 2011-12 was around $140 billion, 70 per cent higher in real terms than a decade prior. He said:

Australians on average are now living 25 years longer than a century ago; however, these improvements come with a rapidly rising price tag.

The report shows that health expenditure has grown in real terms at an average rate of 5.4 per cent per year in the past decade, far outstripping growth in the broader economy, which has only been growing at 3.1 per cent.

Almost 70 per cent of total health spending in 2011-12 was funded by governments, with the Australian Government contributing the greatest share at 42.4 per cent.

However, see the analysis of the costs in the post below by Dr Stephen Duckett, health program director at the Grattan Institute, who notes that cost increases are significantly driven by new technologies – drugs and machines that lead to improved diagnoses and improved outcomes, and that there is a context to the rising ratio of spending to receipts:

Importantly, the AIHW report highlights that this is a revenue side issue – the share increased because of a GFC-induced fall in revenues. With improved economic health, the ratio is now falling back towards a more comfortable position, at least for the Commonwealth. (see graph) 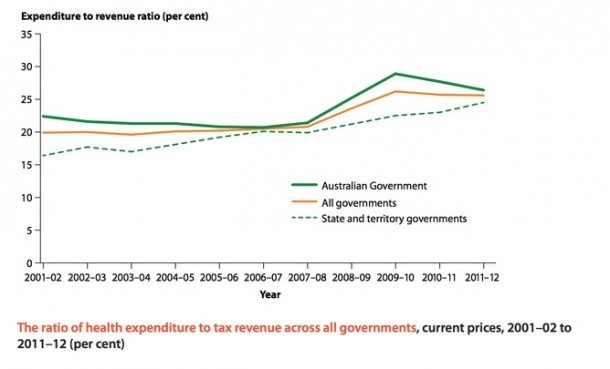 In this release, the Consumers Health Forum said the report showed that individual consumers were  already covering up 30 per cent of the cost of primary health care:

The largest share of non-government health funding, $24.3 billion, came directly from individuals. Private health insurance funded another $11.2 billion of health expenditure and most of that came from individuals through the premiums they pay.

See also insights on health prevention and equity by Rob Moodie and Sharon Friel in The Conversation’s assessment below, as well as some Twitter reactions at the very bottom.

Here’s the AIHW media release, which outlines the main points from the report, or its summary report.

And here too are some of the early media reports:

Australians have one the longest life expectancies in the world but are living with growing levels of lifestyle-induced chronic illness, according to the latest national health report card.

The Australian Institute of Health and Welfare’s Australia’s Health 2014, released today, shows Australians can expect to live about 25 years longer than a century ago – to 79.9 for men and 84.3 for women.

But life expectancy for Indigenous and rural Australians is much lower.

Excess weight remains a considerable burden on the health system, with 63% of Australians either overweight or obese. Around 43% of Australians meet the recommended minimum levels for exercise, with the just one in four over-75s sufficiently active.

Almost one in five Australians (19.5%) consume more than the recommended maximum of two drinks per day, which has remained constant. But the proportion of people who never drink alcohol has increased slightly, from 10.1% in 2007 to 12.1% in 2010.

Chronic diseases are the leading cause of illness and death in Australia. Coronary heart disease remains the biggest killer, followed by:

The Conversation’s health experts analyse the report’s findings on lifestyle choices, health inequalities and the cost of care.

Rob Moodie, Professor of Public Health at the University of Melbourne

There is some very good news in this report. Life expectancy continues to rise, and years lived with disability decline. Smoking rates are dramatically down over the last 50 years (from 58% to 16%) and heart attack, cancer and asthma death rates are all falling.

Injury deaths too, are down, and vaccination rates are improving – particularly at age five – and an increasing proportion of girls are being prevented from cervical cancer with the HPV vaccine.

The report shows our greatest health challenges are now chronic diseases, which are responsible for 90% of deaths in Australia. These are the non-communicable diseases (NCDs) including cancer, diabetes, cardiovascular and respiratory diseases.

We know that up to 80% of heart disease, stroke and diabetes and one third of cancers, the so-called “lifestyle” diseases, can be prevented by stopping smoking, shifting to healthy diets, increasing physical activity and stopping the harmful use of alcohol.

However, levels of excess weight and obesity in adults continue to rise and remain stubbornly at Everest-like heights for children. These are accompanied by very low levels (8% and 49% respectively) adhering to recommended vegetable and fruit intake, less than half exercising enough, and one on five Australians drinking more than two standard drinks per day.

Why aren’t we successful with managing our weight, our diets, our levels of exercise and alcohol consumption, as we have been with smoking, or skin cancer prevention? We do have choices, so taking personal and parental responsibility is part of the solution – and it’s a lot easier if you have high income, education and are employed.

But losing weight on your own, for example, is notoriously hard. As a nation we have put weight on together. I’m convinced that to lose it we’ll have to do it together, just as we have reduced smoking levels over time.

NCDs are not only “lifestyle” diseases, they are also “industrial” diseases fuelled by powerful transnational tobacco, junk food and drink, and alcohol corporations. The tobacco epidemic would simply not exist without the tobacco industry.

The biggest challenge we have is for the community to force changes in the behaviour of these unhealthy industries on the one hand, and for the best and the brightest in Australia to turn healthy food and physical activity into outstanding commercial successes on the other! If this happens then our personal and parental responsibility really can work.

Unsurprisingly, Indigenous Australians, people from lower socioeconomic groups and rural dwellers continue to have poorer health and health outcomes compared to other social group. Averages mask inequities. So it’s good to see the summary report shine a spotlight on the stubborn, and in some cases worsening, health inequities in Australia.

Inequities are also keenly observed between the health of people living in rural and remote areas compared to more urbanised areas. Rural and remote dwellers have less access to health services, travel greater distances to seek medical attention, and generally have higher rates of ill health and early death than people living in larger cities.

People from lower socioeconomic status also experienced higher rates of lifetime harm from drinking alcohol (22%) than those in wealthier areas (17%).

Why do these inequities exist and persist? The report provides a breakdown of the contribution of factors to the health inequities between Indigenous and non-Indigenous Australians:

If we want to address health inequities in Australia, we need to focus on the conditions in which people are born, grow, live work and age. We need policy and practice that aims to address educational disadvantage, lower employment and income rates.

And we need a real focus on removing the institutional racism that reinforces the health inequities between Indigenous and non-Indigenous Australians.

Stephen Duckett, Director of the Health Program at Grattan Institute

The new AIHW report confirms both “known knowns” and “known unknowns”, as Donald Rumsfeld once distinguished.

Health costs are rising as a percentage of GDP – over the last decade increasing at 5.4% per year compared to annual GDP growth of around 3.1%. But only Dickensian characters and the occasional politician focus entirely on costs, ignoring value or benefits for increased spending.

The report highlights that cost increases are significantly driven by new technologies – drugs and machines that lead to improved diagnoses and improved outcomes. Community expectations are also increasing, both in terms of expectations about the ability of technology to address health problems and access to those technologies.

The Report, though, lists some important gaps in data collation:

there is a lack of information generally on the outcomes of health care in Australia, and limited information is collected on safety and quality, efficiency and cost-effectiveness.

The report also presents government health expenditure data in a new way, comparing the ratio of spending to receipts. After a decade of stability where government health spending was around a fifth of government revenues, the health share increased to more than one quarter.

Importantly, the AIHW report highlights that this is a revenue side issue – the share increased because of a GFC-induced fall in revenues. With improved economic health, the ratio is now falling back towards a more comfortable position, at least for the Commonwealth.

The trend line for the states isn’t changing, showing a continued increase in the ratio of health spending to state revenues. This makes their squeals of pain following the 2014 commonwealth budget cuts to the states even more understandable.

The report shows bulk billing is highly variable, residents of the ACT have to use a microscope to find a bulk-billing doctor (about 55% of services bulk billed) compared to much better access across the border in NSW (87%).

Finally, on access, the report presents a depressingly familiar picture: one in every 30 or so patents wait more than a year for elective procedures; one in ten wait more than eight months. 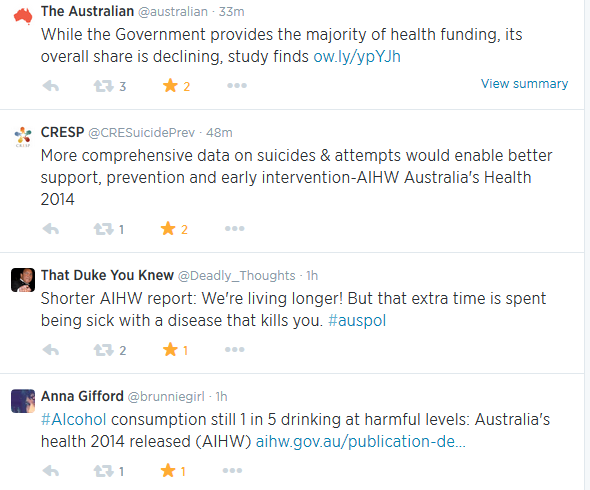 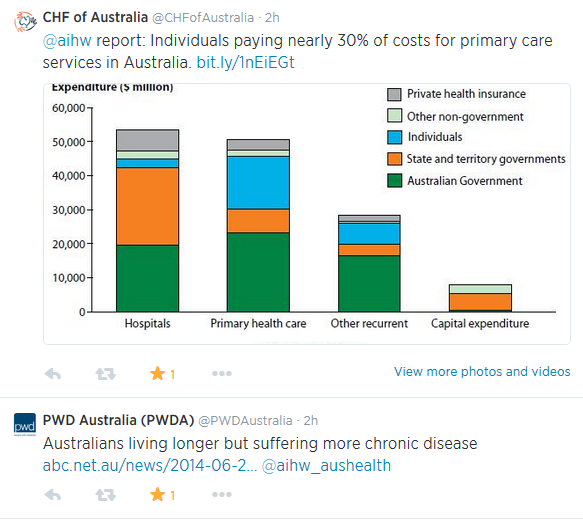 PrevPreviousYoung people already at risk in crowded housing market: what next under #2014Budget?
NextBig Tobacco and plain packaging: another smoke and mirror job?Next