Local knowledge and solutions are essential for health reform: the experience of one Medicare Local

The article below, profiling the early work of a Medicare Local in northern NSW, is in response to the challenge posed in the previous post – which asked what health policy or system innovations have had a positive impact on health care access, quality, outcomes, and/or costs.

For real change to occur, she argues that “local knowledge and local solutions are essential”.

In a short time, a lot has been achieved

Whilst I share the frustration of many that health reform is taking too long, notwithstanding the entrenched and longstanding system problems that must be addressed, I’ll give you an example that is hopeful, creative, and involves the community.

This example suggests we should not give up on reform and should retain hope while ensuring the potential of Medicare Locals are realised.

I would like to describe ‘our’ Medicare Local. In a little over six months, the Medicare Local is starting to make a difference – albeit this is still small and vulnerable. The road it is taking, however, looks positive.

This Medicare Local covers 35, 570 square kilometres of the North Coast of NSW with a population of over half a million. The region accommodates 12 local government areas and has the one of the highest rates of population growth in the State. At the same time the proportion of people over 65 is greater, at 18%, than the rest of New South Wales.

Despite pockets of affluence on the beaches, we are lower than the State average in almost all socio-economic measures and have nearly twice the NSW average of residents identifying themselves as Aboriginal.

Our Medicare Local was formed in April by joining four divisions of general practice that covered two recently established Local Health Districts. These Divisions had been preparing for change prior to this with a high level of interaction between them.

Despite goodwill and preparation, the energy and challenges of bringing financial systems, information services, and human resources and four teams into one system have been enormous.

Nonetheless, staff and the initial Board did not get bogged down. They have achieved substantial gains, a readiness for change and strong engagement with the community, primary health care practitioners, social and other agencies, and are working hard to engage with the two local health districts that it straddles.

An early and urgent priority was to address the sense of loss felt by the four Divisions of their own practical infrastructure and support and to meet their needs.

A priority was to get them involved and benefiting from the Medicare Local. A solution has been to strengthen and consolidate the four Practice Assistance and Liaison (PAL) Teams who are now better resourced and work as a consolidated team.

The Medicare Local has increased their resources and now has eight full-time PAL staff who intend to regularly engage with each general practice to help with practice accreditation, continuous education, quality, auditing, training new staff in medical software, e-Health, Aboriginal Health, immunisation and ensuring practitioners have the latest information on Medicare. They are also available on the phone for support at any time.

However, the ‘brief’ for these workers has also expanded. They now are working to improve integration and coordination of primary health care by not only delivering support to GPs but also other care providers such as psychologists, pharmacists and Residential Aged Care Facilities.

They have set up practice improvement meetings (‘collaboratives’) for these health professionals to learn from each other, share knowledge and work on quality improvement.  These groups will also discuss how to make complex initiatives work – such as setting up electronic prescribing in aged care facilities. This requires the cooperation of general practice, aged care facilities and pharmacists. The Medicare Local has provided the vehicle for this to occur.

Team members are the agents through which the Medicare Local engages and promotes innovation and best practice and they are starting to bring together the primary health care team to more effectively support the GPs and their patients through a ‘medical home’.

Reconceptualising general practice has occurred through focused work from GP leadership around the medical home. This provides a vision but also the basis for the integration and activity linking disciplines and agencies. This work has established the centrality of the patient and family in wellness and managing illness for the Medicare Local.

Board members and the CEO and local University researchers have already applied for competitive research funds to research the application of the medical home across the Medicare Local.

A local knowledge local solution framework has been developed, to encourage innovative thinking, harness a culture of creativity and bring about change – to build a community of ideas and innovation.  One initiative of the innovation arm is the PITCH (Practical Ideas To Change Healthcare).

The Medicare Local will then breathe life into the idea and fund its implementation to improve health services. Each PITCH series has a different theme. The first invitation to ‘PITCH’ ideas resulted in 27 entries and resulted in much enthusiasm and innovation.

The ML spent the month of June, two months into its life, meeting with clinicians and the community. In total 14 meetings were held. They were a combination of nine “Town Hall” style public meetings and five round table discussions across the geographical footprint – from Tweed Heads to Port Macquarie (see this previous Croakey post for more detail).

The Medicare Local has also established HealthSpeak, an impressive regional communication tool. HealthSpeak is a full colour 32-page publication magazine produced quarterly for all health professionals, media, politicians and members of the public with an interest in health issues.

The magazine has over 8000 online readers and 1500 hard copies were also distributed. 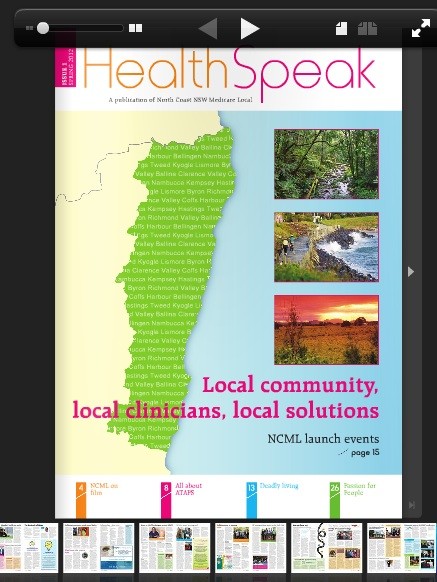 The final activity described here, but by no means is the least, is combined work occurring in one of the previous Divisions between the Local Health District, the Medicare Local, Aboriginal Controlled Medical Services, our ‘GP Training’ organisation and local university entities.

This is planned to combine services and teaching of students and registrars so gaps for underserved populations can be filled. Together we are all working out the best way to maximise skills, and a range of input from agencies to provide services where these do not exist. The capacity to work with students enables us to extend these services beyond those that are Medicare rebatable.

We are also exploring the sustainability of these services. Opportunities are being explored to provide general practice, allied health, exercise physiology and pharmacy services etc where these do not exist because population size precludes a business model of practice.

No one should underestimate the difficulty of bringing about real reform given the entrenched divisions in funding and organisational structures in the Australian health care system.

The expectation that Medicare Locals will make immediate change in short period of time is unrealistic. It is early days but we are hopeful and determined to succeed.

Perhaps it is easier in the ‘country’ because we do have an ethos of working together and a stronger sense of community that thrives in most small towns.

People seem to behind this and are enthusiastic to participate in ways more difficult to do with the hospital sector perhaps. So do not write reform off – we just need vehicles to carry it. The Medicare Locals can be one of these.

I have recently been elected to the board of this Medicare local. The work I describe here occurred before my election through an interim board, based on leaders from the previous general practice divisions and a new CEO. A number of these board members have been re-elected to the new board.

Stay tuned: the next post will feature some recent work by the Tasmania Medicare Local…

PrevPreviousAfter all the years of health reform effort and expense, what has been achieved?
NextWhat does the community want from after hours care?Next