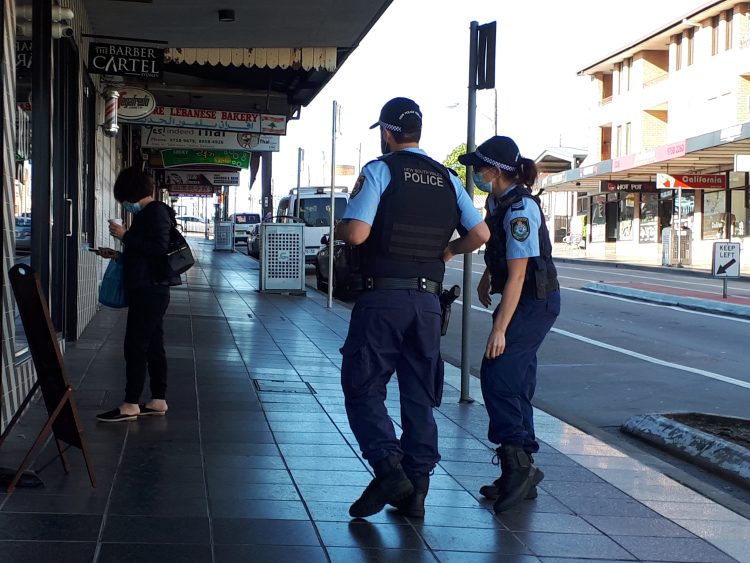 Police are patrolling the streets of Sydney's LGAs of concern. Photo by Cate Carrigan

Lock down smarter, not harder

Introduction by Croakey: Hard and fast lockdowns may still miss key pathways of COVID-19 transmission in workplaces and among some communities, particularly those who are providing the essential services that everyone relies on, from aged care to food distribution.

In the article below, first published in Inside Story, health promotion strategist and PhD student Daniel Reeders writes that looking to limit workplace mixing, as Victoria learnt to do last year, and building the capacity of affected communities to respond to the outbreak is the smarter response. He concludes:

The same interpersonal networks that can transmit a pathogen or misinformation can be harnessed to pass on resources and skills for protecting yourself, your loved ones and your community from the crisis.

As we have learned from the HIV/AIDS crisis, highly mobilised communities are more powerful in promoting health than any punitive response.”

My ears pricked up a few weeks ago when the NSW chief health officer, Dr Kerry Chant, described workplaces as melting pots. Made at the daily presser, the remark highlighted the crucial fact that interpersonal networks drive outbreaks of SARS-CoV-2.

Understanding the network epidemiology of COVID-19 is the key to bringing the current NSW outbreak under control.

It begins with a paradox. As we learned at a subsequent presser, 70 percent of cases are being transmitted among household members. So why focus on workplaces? We all understand that the virus travels through the networks established when people spend time together. When it gets into a household, Delta rapidly infects everyone living there, and often their extended family as well, generating a big spike in case numbers.

But we need to be asking how it reaches households in the first place.

When we describe workplaces as melting pots, we mean they are places where people who don’t otherwise know each other are mixing, creating links among household and family networks that wouldn’t otherwise exist. If we want to prevent the household clusters that generate big numbers, we need to eliminate these “bridging” cases.

Restrictions are not simply intended to ensure everyone stays at home so that nobody can possibly be infected. Their little-recognised goal is to reduce the mixing rate among people from different networks.

Not understanding this, we fear the wrong thing. The general public and the news media worry enormously about casual contact among people in public spaces.

But as Victoria’s second wave demonstrates, when COVID-19 gets into workplaces, that’s when the trouble really begins. Introducing 9pm curfews, increasing police presence on street corners, and wearing masks at all times in public have zero effect on this crucial transmission mechanism.

Lockdown’s Achilles heel is it almost never extends to essential workers. Our click-and-collect orders aren’t going to pack themselves. We need workers to drive trucks and stack shelves with food, not to mention the toilet paper we run out of. Healthcare, aged care and disability services must continue. And all of this permits workplace transmission to continue even as restrictions get tighter and tighter.

It’s no accident that transmission is concentrated in the areas of Sydney with the highest proportion of precarious migrant workers. In communities like these, people need dense social networks offering practical, spiritual and cultural support to survive under pressure. This “network topology” facilitates transmission of contagious pathogens.

Informal aged care, for example, is extremely common in migrant communities. Gladys Berejiklian keeps talking about people in large families visiting other households, as if they’re getting together for long lunches. But what we’re talking about is family members taking turns to bring food and provide care to grandma. You can’t just stop doing that, no matter how steep the penalties become.

The other problem with network-driven outbreaks is that they are really hard to model. Estimating transmission rates depends on understanding the network landscape, and that’s exceptionally difficult to map in real time. You can’t do it using the abstract mathematical models that dominate our public debate.

At long last, we’re beginning to see discussion of these modelling shortfalls. Models that assume the population is a monolith ignore the heterogeneity of networks and groups, which can sustain ongoing transmission even when the population is under lockdown or 80 percent vaccinated overall.

We need to lockdown smarter, not harder. This means a lockdown that responds to the network contours of the outbreak in front of us.

Outspoken public commentators have learned all the wrong lessons from Victoria’s second wave. Rather than copying interventions that apply to low-risk activities in public — curfews, limits on exercise, playground closures and mask-wearing in public — we should look at what Victoria did to limit workplace mixing.

Under the restricted activity directions enacted on 5 August last year, the Victorian Government imposed extremely detailed limits on workplace occupancy. The meat industry was reduced to two-thirds of employees on-site, while construction was reduced to “pilot light” levels, at 25 percent of normal workforce.

So far in New South Wales, the burden has been placed on the shoulders of workers in “LGAs of concern”, including a requirement to get swabbed every three days before leaving the local government area for work. But with Delta, a lot can happen in three days. To drive cases towards zero, strict limits must be applied to employers rather than employees.

And there’s the rub. The NSW Premier must manage three factions in her cabinet. One favours a public health response to the crisis, following health advice from Chant. Another demands (with increasing success) a law-and-order response. And a third, in the ascendant, demands freedom for industry and the economy.

Backed by the PM, Berejiklian has adopted the line that we need to learn to live with the virus. As the state moves towards 80 percent double-dose vaccination in the community, she says, what will matter is not the daily case rate but numbers of hospitalisations and deaths. This is primarily consistent with the demand for economic liberalisation.

A health equity perspective tells us that an 80 percent average will conceal pockets of the community where vaccination rates are much lower. If New South Wales opens up at that point, this heterogeneity will sustain ongoing outbreaks. These will include breakthrough infections among the vaccinated, but will concentrate illness and death among precarious and vulnerable groups.

Rather than going harder and harder until the heat death of the universe, a smart lockdown would make greater use of soft skills.

Instead of putting police and the military on the streets of LGAs with significant migrant populations from war-torn countries, it would further invest in building the capacity of affected communities to respond to the outbreak.

The same interpersonal networks that can transmit a pathogen or misinformation can be harnessed to pass on resources and skills for protecting yourself, your loved ones and your community from the crisis. As we have learned from the HIV/AIDS crisis, highly mobilised communities are more powerful in promoting health than any punitive response.

This article was first published in Inside Story, and was supported by a grant from the Judith Neilson Institute for Journalism and Ideas. Croakey thanks Inside Story and Daniel Reeders for permission to re-publish this piece.

PrevPreviousWhat is needed to deliver on the investment in the Medical Research Future Fund?
NextOpening up when 80 percent of eligible adults are vaccinated won’t be ‘safe’ for all AustraliansNext