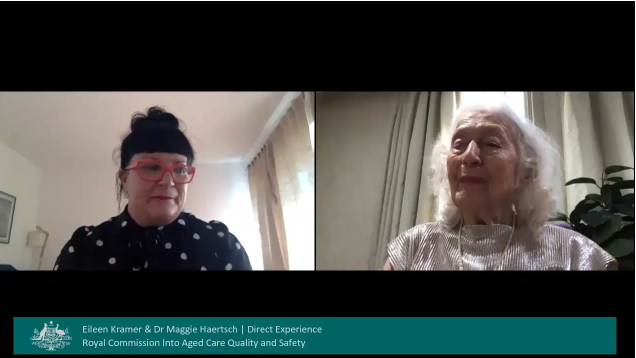 “Look after the house so the spirit can enjoy life”: stories of hope and harm from the Aged Care Royal Commission

Harrowing descriptions of individual experiences in aged care – by residents, families, and aged care workers – were at the heart of the final submissions from senior counsel assisting the Royal Commission into Aged Care Quality and Safety last week.

Among them were the “heartbreaking account” of a young man forced by a football assault to live in aged care, who described how he cried the first night he was there, thinking: I’m 22, I’ve got maybe 65 years left in my life and I’m forced to live here for the rest of it with no ability of ever getting out.”

A union representative for aged care workers talked about them feeling like they were “‘on the bottom of the Titanic ship”, while an older resident of an aged care facility declared: “This is not a home, it’s an institution, it’s where you live.”

Not all were stories of pain or distress, with a number showcasing the impact and importance of good care and comfort, but all pointed to the need for urgent, comprehensive system change. See the cases highlighted from the final submission in full below.

Informed by those stories and many other submissions, the senior counsel, QCs  Peter Gray and Peter Rozen, have called for an independent Australian Aged Care Commission to be established, along with new legislation based on human rights and mandated staffing ratios, among 124 recommendations they put to the Royal Commission last week as part of their 475 page final submission.

As media outlets have reported, there is no guarantee the recommendations will be taken up by the Royal Commissioners in their final report, particularly around the need for a new independent body.

Anyone interested can respond to the final submissions and other matters arising at the hearing, but must do so by 12 November 2020. The Royal Commission’s final report is expected to be handed down in February 2021.

See at the bottom of the post too for responses from key groups to the final submissions.

“Once in a lifetime chance for change”

Gray and Rozen opened their final submission by quoting the late Commissioner Richard Tracey that:

The Royal Commission is a once-in-a-lifetime opportunity to come together as a nation to consider how we can create a better system of care for elderly Australians that better aligns with the expectations of the Australian people.

The hallmark of a civilised society is how it treats its most vulnerable people.”

Saying this has been “most in-depth and thorough examination of Australian’s aged care system that has ever been undertaken”, they detailed an array of statistics about the breadth and depth of the Royal Commission’s inquiry including:

But, critically and in moving detail, they observed that while these statistics are impressive, “they are so much more than a collection of numbers”.

Saluting the courage of witnesses for sharing the most intimate details of their lives to inform this inquiry, and noting how difficult it was to hear many of the experiences, they highlighted individual stories from residents, families and aged care workers that had informed their submission and recommendations. They said:

Many of these accounts were difficult to listen to; all were very valuable. We are grateful to these many brave people.”

Senior counsel said that over the course of the Royal Commission’s public hearings many aged care workers, including registered nurses, and personal care workers who work in home and community care and in residential aged care facilities, have given evidence.

“Some of these workers also work in the disability sector. All of these witnesses spoke with passion and commitment for the work they do and for the older people for whom they care.

“Many explained that they are aware that they are the only point of contact the older person has with the outside world on any given day. However, in equal measure, they spoke of the lack of value that is placed on their work. Of always being rushed in their work, and how attending to one resident’s needs would mean not being able to attend to the needs of other residents.

“They described how there is simply not enough staff or time available to support the needs of the residents. Many explained that they would regularly stay back on their own time to meet the needs of people receiving aged care services. Most spoke of the need for improved conditions and training and increased remuneration and respect.”

Senior counsel said the role of allied health in aged care is fundamental, as is access to oral and dental, and mental health treatment and services.

In closing their overview of individual stories, they said the words of Ms Eileen Kramer are worth recalling:

Having had a successful career in modern dance and the arts overseas, Ms Kramer returned to Sydney when she was 99. She now lives in a residential aged care facility and continues to work choreographing a new dance, writing and producing artworks. Ms Kramer is a reminder that there is much to learn from our older people.

Ms Kramer memorably urged us to ‘Look after the house so the spirit can enjoy life’. With this in mind, we submit it is the responsibility of the aged care system to support and nurture our older people.

Recommendations for the Royal Commission to consider

Senior counsel said the final report of the Royal Commission “will represent the culmination of the Commission’s nearly two and half year inquiry into aged care quality and safety” and be the “basis for judging the quality of the inquiry process and the credibility of findings”.

They said while all of their 124 recommendations are important, the most significant are:

Responses to the closing submission

PrevPreviousAs UN nuclear ban treaty enters into force, time for Australia to address its role and history
NextOf all the places that have seen off a second coronavirus wave, only Vietnam and Hong Kong have done as well as VictoriansNext