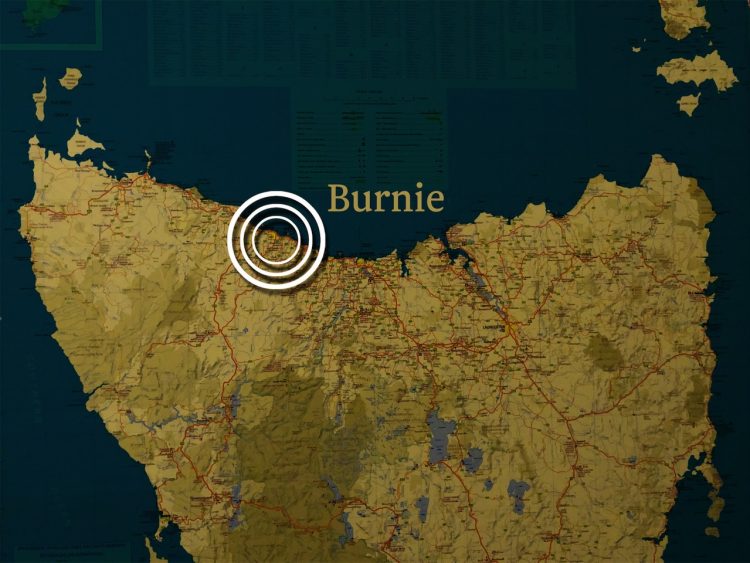 National lessons from a local outbreak. Image by Mitchell Ward

A regional community in north-west Tasmania is dealing with wide-ranging ramifications of a localised outbreak of COVID-19, reports Marie McInerney.

Health experts are looking for urgent answers as to how Tasmania’s North West region has become the coronavirus epicentre of the state amid warnings that unprepared rural hospitals across Australia are “ticking timebombs” in the pandemic.

The dramatic shutdown of the North West Regional Hospital and North West Private Hospital in Burnie on Monday, and immediate quarantining of about 5,000 people, including around 1,200 health care workers, has major implications for the region and beyond.

A significant proportion of the population is affected, given that Burnie has a population of about 20,000, while the North West region has about 113,000 people.

Health and community experts are worried about health issues and healthcare for people in the region, which has high levels of disadvantage and chronic health conditions, and about adding pressure to healthcare services elsewhere in the region and the state.

Concerns have also been raised about community cohesion and wellbeing as rumours swirl about the Burnie outbreak, with the region accountable for 85 of Tasmania’s 169 COVID-19 cases.

A broader concern is what the Burnie situation might foreshadow for other regions in Australia. Those risks that were highlighted on Wednesday by Rural Health Commissioner Paul Worley, who tweeted that 14 rural clinicians at Kalgoorlie Health Service in Western Australia are also now in isolation after caring for patients who had atypical COVID-19 symptoms.

The Australian College of Rural and Remote Medicine (ACRRM) and the Rural Doctors Association of Australia (RDAA) said today there are “many gaps” in preparation for COVID-19 in some hospitals that governments must urgently address.

In a statement titled “Ticking time bombs – under-prepared hospitals could blow up under COVID pressure”, they said it is essential that all state health departments support rural hospitals with appropriate supplies of personal protection equipment (PPE), critical care drugs, equipment and simulation training.

Burnie’s experience shows that it doesn’t take much take much for the coronavirus to “go through the workforce” of a rural or regional hospital or health service, shutting it down and risking further spread, says Rural Doctors Association of Tasmania (RDAT) secretary Dr Ben Dodds.

“I think we all want to understand from Public Health Tasmania the results of their investigations (into the Burnie outbreak) so we can have real time learnings and understandings of what’s happened in our hospitals, so it’s not replicated in the same hospitals and any hospitals across the country,” he told Croakey.

Dodds is a rural generalist registrar who works in community palliative care in Burnie. He is not based at either of the affected hospitals, but does provide services there, including a visit to a medical ward earlier this month.

That meant on Sunday he was required to go into immediate 14-day quarantine, along with his partner, an emergency doctor at the nearby Mersey Hospital, near Devonport.

It’s frustrating, he says, to be stuck at home as doctors during a health crisis, “but you realise the way you can help is to stay home”, he says.

Under the scaled up response to growing concerns about COVID-19 cases in the region announced by Tasmanian Premier Peter Gutwein, both hospitals are being “deep cleaned”.

Fifty members of the Australian Defence Force and seven AUSMAT (Australian Medical Assistance team) personnel arrived in Burnie on Tuesday to ensure emergency services at North West Regional can come back online, in the absence of so many staff, after the deep clean.

Meanwhile, the Premier announced that extra staff would be deployed to the Mersey Community Hospital to help care for existing patients from Burnie, with transported patients treated “with the full precautions – as if they have coronavirus”.

Other measures now being put in place include the ramping up of retrieval services and transfers to Launceston General Hospital.

Dodds said the impact of the outbreak and lockdown at Burnie has been “huge” and is yet to unfold fully, including the impact on mental health and wellbeing.

“I think everyone’s mental health is quite fragile here in the North West,” he said.

There’s a layer of stress in any case about the pandemic, he added, but there’s now a ‘heightened sense of anxiety’ about being in media headlines across the country of ‘an example of what can go wrong’.”

Meanwhile, Premier Gutwein warned “keyboard warriors” who are out there taking a pot shot at health care workers about the outbreak to “just draw breath and accept that there is a process under way”.

Dr Eve Merfield, RDAT president, told a rural health webinar this week that media reports about the rumour had caused “enormous hurt and anger” for the community. She later told Croakey such rumours risk adding to worrying levels of abuse of health workers around the country in response to the pandemic. She said:

You look at other parts of the world where people are out cheering and clapping health workers.

It’s very disappointing to see people reacting to health care workers in that way, and something that should be absolutely condemned.

They’re putting their lives on the line to help people.”

Rather than apportion blame, Dodds wants to learn from the investigation what Burnie might have been doing differently from other hospitals that have managed to safely treat patients with COVID-19, or whether there is something yet unknown in the mix.

He says there will always be the ability in a crisis to look back and ask whether or not authorities should have acted sooner and faster. What is critical is to be able to guarantee that the hospitals can re-open as soon as possible and to do so safely.

Key questions expected to be asked by the investigation are around the role and quality of infection control and the adequacy and effectiveness of protective action. That includes basic “non-sexy” hygiene practice like hand washing, but also whether there was appropriate access to personal protection equipment (PPE) and if it was being used in the right way.

Health professionals say they want to know whether there was “crossover” between different departments, wards, and rosters that could have spread infection, what safeguards and protocols were and are in place for an unexpected COVID-19 patient or if a health worker was inadvertently exposed, and what risks have come from the high reliance of the area on locums brought in from other areas of Tasmania and the mainland.

Dr Elizabeth Haworth, Adjunct Senior Research Fellow from the Menzies Institute for Medical Research at the University of Tasmania, said the report of the investigation has been promised to the public.

Haworth said all symptomatic cases and their contacts are being tested for the novel coronavirus, but that may need to be widened, “at least to a random sample of the defined population or particular GP populations to assess the community spread of the infection”.

Ruth Forrest, the independent Member for Murchison, who represents the region and was was born in Burnie , said the decision to close both Burnie hospitals was huge.

But she felt there was “almost a collective sigh of relief” at the Premier’s announcement, after growing concern at the increasing number of COVID-19 cases and infections among health workers.

“I think people realised something fairly dramatic needed to happen,” she told Croakey.

The former nurse and midwife says she is confident measures are being put in place to manage health needs in the region in the interim, and to get both hospitals and the workforce back on deck, safely, as soon as possible.

But she also reports that there is considerable anxiety, concern and risk.

Burnie and the many towns that rely on it may look close to each other on the map, but roads are narrow and windy, winter is looming, and for some, even an hour’s drive may be too far. 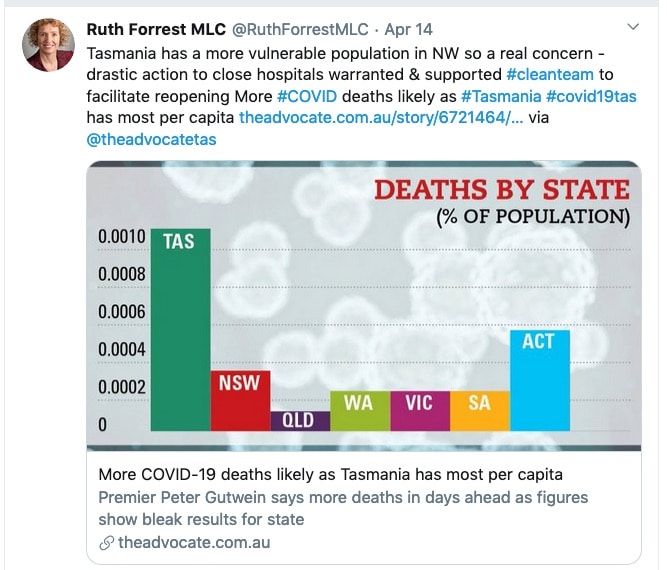 Nikki-Lee Butler, from Burnie, is one of those experiencing some anxiety. Just over 37 weeks pregnant, she got a call late on Monday night from Public Health Tasmania advising her to go to Launceston General Hospital for the birth.

They said free accommodation would be available to her and about 40 other women in the North-West region who are due to give birth over the next four weeks.

That was a welcome reassurance after the “huge shock” of hearing that the North West Regional Hospital was shut down.

But with her previous labour taking less than an hour, Butler was also still worried about having to balance the need to look after her two young daughters, one of whom has asthma, and her fear of “having my little one on the side of the road”.

She is just over 30 weeks pregnant with her fourth child, and has an auto immune disorder, which puts her in the vulnerable category for COVID-19. Her pregnancy is also high-risk as she required an emergency caesarean at 29 weeks with her last child.

Forrest hopes health services will be able to step up and resolve the community’s concerns as soon as possible, but says there are many other health and social worries for a region that has an above average ageing population, high rates of intergenerational poverty and disadvantage, and a high burden of chronic disease.

She is worried about what happens for people with “everyday” medical emergencies – a heart attack, stroke, diabetic episode, a severe asthma attack or someone who breaks their leg – all of those emergency needs that “don’t stop because of COVID-19”.

The Tasmanian Council of Social Service (TasCOSS) shares many of Forrest’s concerns, worried that the hospitals’ closure will exacerbate the region’s already significant lack of access to affordable primary health care services.

Local GPs have sought to step into the breach, with many opening on Easter Monday to relieve some of the pressure from the hospital closures.

Forrest has been assured that increased retrieval services are being put in place to transfer patients to Launceston. She says a callout from Launceston General Hospital has met with “quite a decent uptake” from retired and former health professionals.

She wants the State Government to keep a close eye to ensure there is adequate capacity in Launceston and, if needed, in Hobart, including the possibility of a wider deployment of Australian Defence Force personnel now stationed in Burnie.

“Yes, there will be pressure and it will busy, but if there was an outbreak happened in Launceston or Hobart, we would too play our part up here to assist our fellow Tasmanians,” she says.

Forrest and TasCOSS hope the COVID-19 outbreak in the North West will not only spotlight inequalities but help address them, including through new systems to increase access to digital technologies, information and healthcare.

“These kinds of developments lay the groundwork for remote delivery of primary health care in the future and have the potential to improve access to primary health services for Tasmanians for many years to come,” Zell said.

However, there may be more immediate challenges if a significant proportion of the 5,000 people now under quarantine become sick. This will have implications for health workforce numbers, as well as demand on health services.

A former health manager, who did not want to be named, told Croakey that emergency health services “are gearing up for ‘what if’ – that’s what they train for”.

We think this is still at the bus crash level and we hope we don’t get to the 747 scenario, but I think everyone is rightly nervous, particularly those in ICU who would be the ones prioritising care, making potentially life and death decisions.” 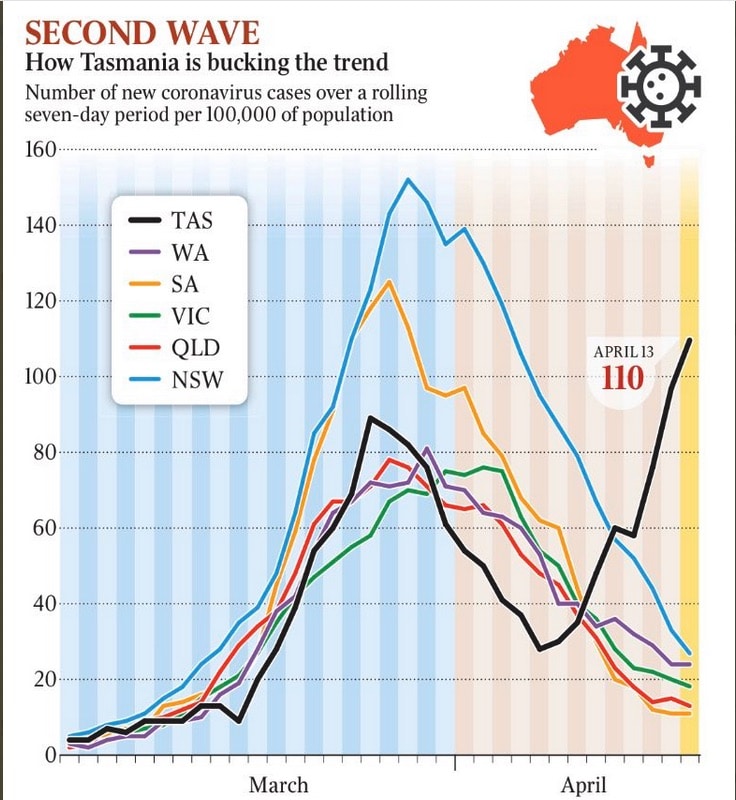 PrevPreviousCOVID-19 has our attention, but other emergencies are destroying our foundations
Next‘Cancer’: what is really in a name?Next