Love rural? What WAS that all about…

Each year, the National Rural Health Alliance holds a “CouncilFest”, an event of many parts, including an opportunity for engaging in some policy development and advocacy. 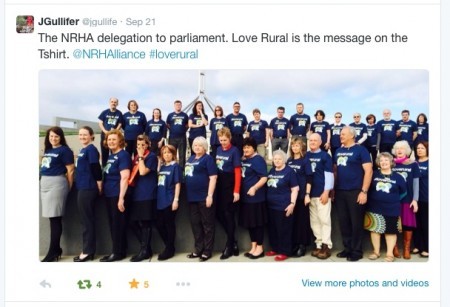 During the recent CouncilFest, many Croakey readers may have noticed an avalanche of photos on Twitter of people walking the Canberra halls of power wearing “Love rural” T-shirts.

In the article below, NRHA CEO Gordon Gregory explains some of the background to CouncilFest – a model which may be of interest to other organisations – and kicks off a Croakey series investigating five key rural health issues.

Imagine, if you will, that in one corner of the Mudgee Field Days ground are all of the aeroplanes, flight nurses and pilots of the Royal Flying Doctor Service. Milling around with them are members of all the Branches of the Country Women’s Association, ready to argue the case against female genital mutilation and to consider advocating for medicinal cannabis.

Also there are the Aboriginal Medical Services of the National Aboriginal Community Controlled Health Organisation, all the Indigenous doctors (still not as many as we need!), the rural health academics and pharmacists.

You get the picture. There in Mudgee are just eleven of the 37 national bodies that comprise the National Rural Health Alliance. To collect together all the members of all the bodies would take up the grounds of the Yorke Peninsula, Dowerin and Lardner Field Days as well as Mudgee’s.

That’s what the NRHA is: a collective of 37 national organisations. Passionately rural and remote, with loads of lived experience of the large and small communities beyond the metropolitan fringes.

The name is significant: it is not just ‘the-annual-meeting-of-the-delegates-to-Council-of-all-37-member-bodies-plus-the-Chair-of-Friends-of-the-Alliance-and-three-individuals-co-opted-for-their-particular-skills’.

It is characterised by the knowledge in the minds of all participants that 40 other individuals have travelled from various parts of rural or remote Australia to share their particular views on the common cause: improving the health and wellbeing of the people outside Australia’s capital cities.

CouncilFest brings together a manager of population health in the Kimberley region, the only optometrist who people in parts of north-west New South Wales ever see, a grazier (with a nursing background) from central southern Queensland, and an experienced remote area nurse now coordinating professional services for CRANAplus. They join practising GPs and rural health researchers and teachers, rural pharmacy and nursing academics, and a carer from the Top End.

Some of them have met face-to-face before. Many of them have not, but recognise each others’ voices from monthly teleconferences. They recognise an ally, albeit someone from a different profession. They quickly grow to trust each other and to like each other. The energy rises and becomes infectious. There is a little music and theatre and ad hoc physical activity to break up the sessions – often involving flamboyant pelvic exercises.

The program for CouncilFest is like a secret recipe in which the order of adding ingredients can be varied without damage to the final product. There is team building to permit individuals to communicate something from inside themselves to be added to ‘name, rank and number’ – which in our case are name, profession, body represented, and home town.

There is consideration of policy positions – lots of it, done much more effectively face-to-face than on the phone. This work culminates in delegations to Parliamentarians, selected because of their electorate, portfolio or shadow portfolio interests.

There are reports on the organisation’s core business: the biennial conference, the Australian Journal of Rural Health.

There is the NRHA’s dinner – not too formal. (This year the mime artist with the live pink doves didn’t show up and there was an operatic singer instead.) There is the AGM, with the current Chairperson piped to his or her position by Breathless Brian Hungerford, revered Honorary NRHA Piper.

And there are meetings with selected agencies keen to avail themselves of the opportunity to communicate at one fell swoop on matters of mutual interest with 37 national organisations.

At CouncilFest 2014, five priorities were confirmed for the NRHA’s immediate and ongoing attention.

Meanwhile, the article below shares the view from NZ

The 23rd CouncilFest of the NRHA was an extraordinary event to be part of. The NRHA were remarkably generous to us whilst we were “on the ground” and we owe them yet another debt of gratitude, for the opportunity to learn once again what it means to work as an Alliance of member organisations focussed on the health and wellbeing of rural communities.

The benefits for us in our respective roles as Chairperson and Chief Executive of the Rural Health Alliance Aotearoa New Zealand (RHᾹNZ) and to our organisation as a whole, will become more apparent over the next year as we implement some of the processes we have seen in action, and continue our association with the various professional bodies and their representatives that we met over this meeting.

CouncilFest is held each year in Canberra, and provides an opportunity for the member organisations of the NRHA to meet, share concerns and plans, and more importantly interact with the people – bureaucrats and politicians – who make decisions that affect the work they do “in the bush.”

Over the first two days the NRHA honed 20 major issues raised by members down to five policy statements of importance to all 37 organisations, and then prepared to take those statements collectively into Parliament.

They met with ministers and shadow ministers as a large group, and also over 30 parliamentarians and senators were visited, each by groups of around five member organisation representatives, literally walking the many kilometres that make up the corridors of power in Parliament House.

It was really impressive to see the unity of purpose and message that was developed by all the member organisations, who took the same five issues into each discussion and avoided raising profession-specific issues, focussing their 30-minute appointment on the consistent message of the NRHA.

The culture of the NRHA is characterised by collaboration, cooperation, common purpose and community, and along with all the hard work that goes into developing the collective messages, practising the art of the political conversation, and other business of the Alliance, the culture is enhanced by multiple opportunities for fun, song and communal exercise.

The “branding” of the group #loverural on distinctive T-shirts meant that everyone in Canberra knew that rural issues were being highlighted over this time, although on Parliament Day we were almost overshadowed by Tony Abbott’s “Terrorism Speech” which almost had us locked out of a locked down Parliament building.

It was a testament to the reputation and standing of the NRHA that despite this our meetings were able to go ahead, under some heightened security review. The NHRA has been influential in the development of RHᾹNZ, in particular the advice we have had from past chairs Dr Jenny May and Professor Lesley Barclay. 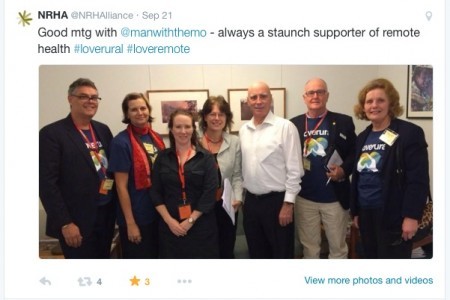 PrevPreviousI Heart My People: some stories from behind the scenes
NextIn brief: ACCC calls for public reporting of payments to doctorsNext