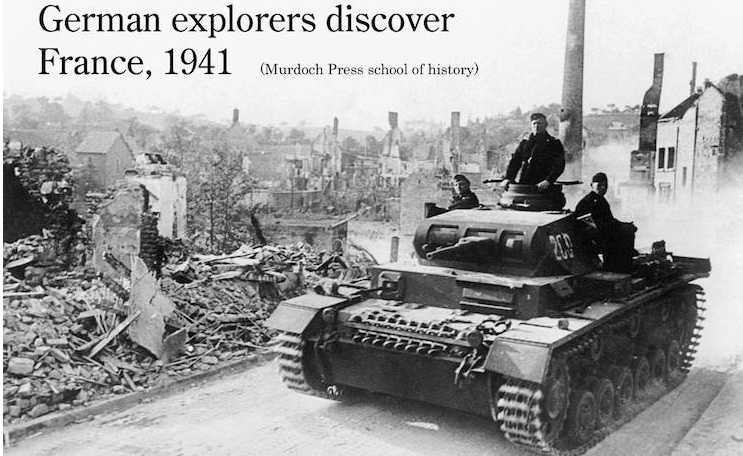 Luke Pearson: You cannot ‘get over’ a colonial past that is still being implemented today.

It’s hard to pick an Australian artist of equivalent stature, particularly on the international stage, as Indigenous musician Gurrumul Yunupingu. Geoffrey Rush? Slava Grigoryan? Richard Flanagan? But it’s impossible to imagine, had there been such concerns about their treatment in a hospital, that they might be accused of being part of a “publicity stunt“.

We saw similar hostility last week over the ‘shock horror’ discovery by the Daily Telegraph that the Indigenous Terminology guidelines of the University of New South Wales concede that Australia was not ‘discovered’ by Captain Cook, nor ‘settled peacefully’.

As Luke Pearson points out in this powerful post below, published first at IndigenousX and republished with permission, the row let loose “a tirade of hatred and ignorance aimed at Aboriginal people”, and the catchcry response for them to “get over” the injustice of the past. It’s impossible, he says, when it’s still in the present.

The invasion of Australia started 200 years ago, but it is everything that has happened since that is the real problem.

The recent shenanigans around the use of ‘invasion’ instead of ‘settlement’ was annoying on so many levels. Not least of which was the stark reminder of how many Australians just require an inciting ‘green light’ from media to let loose a tirade of hatred and ignorance aimed at Aboriginal people.

It can happen at the drop of a hat, over the most insignificant of events. Even a years old document 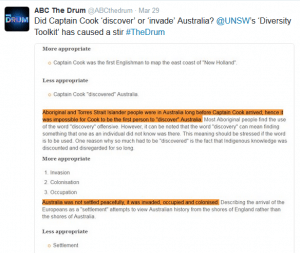 stating things that have been around for decades can set it off. Never mind that it is not an enforceable document demanding students think and talk in a certain way. Never mind Captain Cook, who wasn’t even mentioned in the document in question, was not the first white person to come to Australia. Never mind that the Australian national ethos can proudly embrace historical criminals who opposed government in the form of bushrangers, but feels threatened by the acknowledgement of Aboriginal resistance fighters. Never mind that the edicts from England which spoke of peaceful negotiations, purchasing land and forming treaties were completely ignored in favour of the myth of Terra Nullius, or that the infamous posters pictorially claiming that both white people and Aboriginal people alike would be hung for killing each other was completely ignored (the only white people to be hanged for killing Aboriginal people was after the Myall Creek Massacre, the only massacre that has entered mainstream Australian consciousness, not because of the horrific nature of the massacre itself, but because of the fact that white people were punished for it). Never mind any of that, because as amateur historian Kyle Sandilands said, “get over it, it’s 200 years ago.”

This is a common catch cry of white Australia, one that flies in the face of our other famous war slogan ‘Lest We Forget.”

It is a catch cry so filled with racist crap that we rarely stop to unpack it, but it has always made me curious about just what people like Kyle think so many Aboriginal people are angry about.

Do they think that all of this is about our refusal to ‘get over’ the fact that Captain Cook landed here two hundred years ago, rather than everything that has happened since?

Pemulwuy was killed over 200 years ago, but today his head still sits, unnamed, on a shelf in England somewhere.

The Myall Creek massacre, which I mentioned earlier, was in 1838, 178 years ago.

Jandamarra was killed 119 years ago today, but most people living in Australia still don’t even know his name.

The last formally recognised massacres of Aboriginal people, the Conistan massacres, were 88 years ago. There were plenty of massacres in between too. Australia has such a poor record of acknowledging these that you probably don’t know where the closest massacre site is to where you sit while reading this, but it is a relatively safe bet that it isn’t that too far away.

Aboriginal people were only given the right to vote in the 1960s. Five decades ago.

Lang Hancock called for the sterilisation of ‘half castes’ in 1984, 32 years ago.

Mulrunji Doomadgee was killed by a police officer in 2004, 12 years ago.

These stories are not isolated, and there is no reason to suspect we will not hear similar stories in the future.

Aboriginal children are locked up or removed from their families every single day, as they have been for generations.

Yesterday, white Australian media absolutely lost its shit at the mere mention of the word ‘invasion’. Not two hundred years ago. Yesterday.

These are just snapshots, there are infinitely more stories like these. 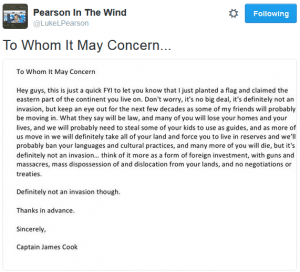 Every time these stories occur though, we can still be confident that Aboriginal voices will not be invited onto most shows to discuss these issues rationally. Not only will Indigenous voices be largely omitted, but the most racist and inflammatory commentators available will be invited to talk on a lot of these shows instead.

We can still be confident that politicians making racist comments will garner public support. That the most disgusting and malicious radio media commentators will be given air time. That police officers who kill Aboriginal people will not be held to account. That governments who fail to meet their own Closing the Gap targets due to their preference of implementing racist, paternalistic and punitive policies will not be held to account. That gross breaches of human rights will be ignored and swept under the rug.

We can be confident that every victory ever won by Aboriginal people in terms of getting our rights is constantly under threat of being taken away. As Dr Perkins once said, “We pray eternally that the White authority structure will not turn on us and impede what little progress we have made”

“We live off the crumbs that fall off the White Australian tables and are told to be grateful.”

All of these comments are as true today as they have ever been.

So tell me, do you really think that we are upset over what happened ‘200 years ago’, or what started 200 years ago?

You cannot ‘get over’ a colonial past that is still being implemented today.

You can not come to terms with a national history that the nation refuses to acknowledge ever happened.

We cannot ‘reconcile’ what happened yesterday when we are too busy bracing ourselves for what will inevitably come tomorrow.

Luke Pearson is a consultant, digital strategist, keynote speaker, social commentator, educator and trainer, and the founder of @IndigenousX – a ground-breaking Twitter account which has a different Aboriginal or Torres Strait Islander person tweeting each week, and which now has its own website. Luke also tweets at @LukeLPearson.