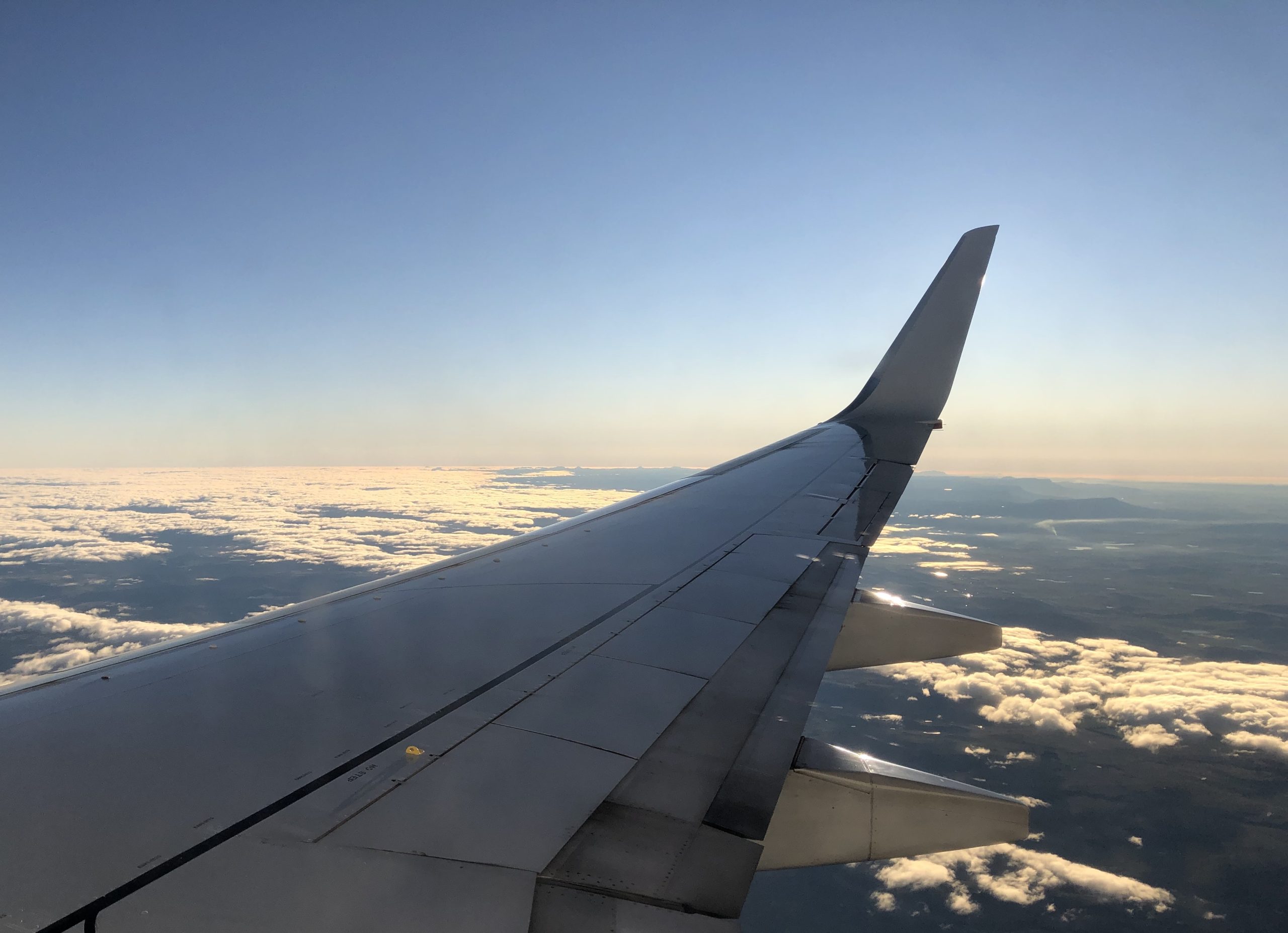 Introduction by Croakey: Amid efforts to reduce the health system’s carbon footprint, it’s worth nothing that the health sector probably boasts more frequent flyers than many other areas of the economy.

Whether flying for business or pleasure, it’s time to consider your flying choices, suggests the article below, first published by The Conversation.

If you’re a traveller who cares about reducing your carbon footprint, are some airlines better to fly with than others?

Several of the world’s major airlines have announced plans to become “carbon neutral”, while others are trialling new aviation fuels. But are any of their climate initiatives making much difference?

Those were the questions we set out to answer a year ago, by analysing what the world’s largest 58 airlines – which fly 70% of the total available seat-kilometres – are doing to live up to their promises to cut their climate impact.

The good news? Some airlines are taking positive steps. The bad news? When you compare what’s being done against the continued growth in emissions, even the best airlines are not doing anywhere near enough.

Our research found three-quarters of the world’s biggest airlines showed improvements in carbon efficiency – measured as carbon dioxide per available seat. But that’s not the same as cutting emissions overall.

One good example was the Spanish flag carrier Iberia, which reduced emissions per seat by about 6% in 2017, but increased absolute emissions by 7%. 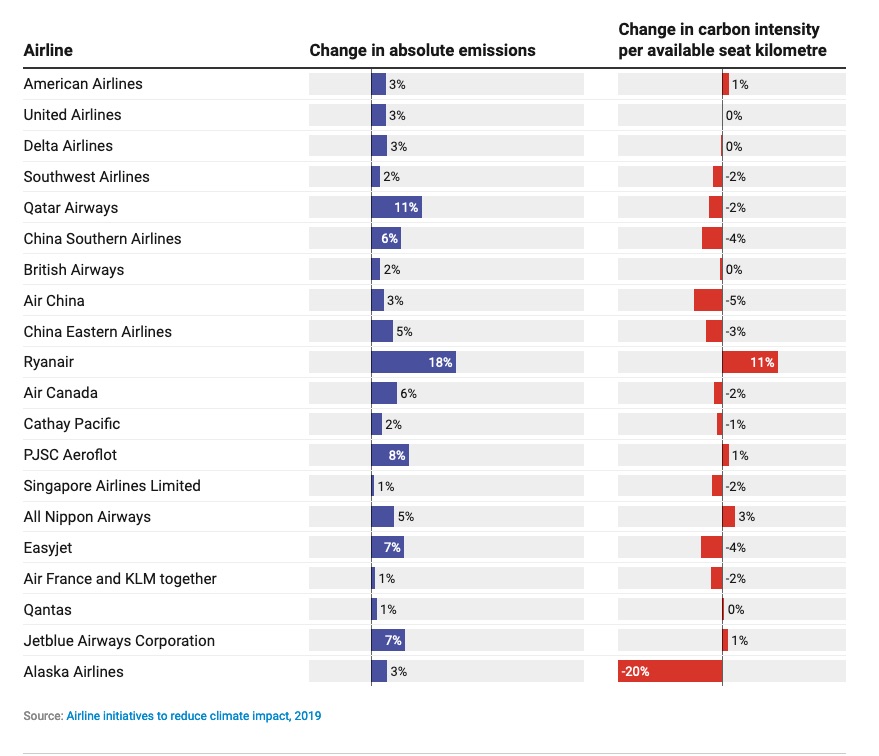 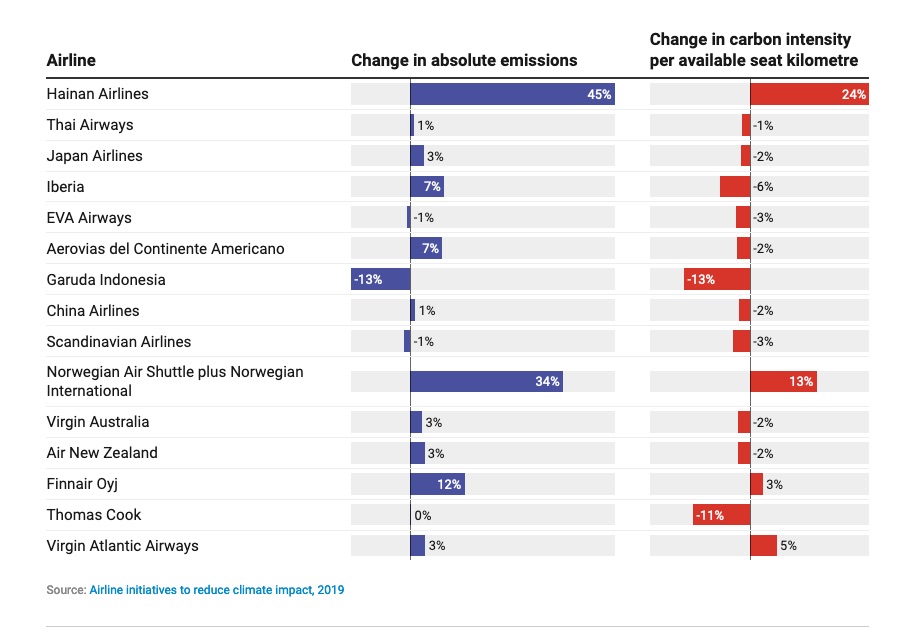 For 2018, compared with 2017, the collective impact of all the climate measures being undertaken by the 58 biggest airlines amounted to an improvement of 1%. This falls short of the industry’s goal of achieving a 1.5% increase in efficiency. And the improvements were more than wiped out by the industry’s overall 5.2% annual increase in emissions.

This challenge is even clearer when you look slightly further back. Industry figures show global airlines produced 733 million tonnes of CO₂ emissions in 2014. Falling fares and more people around wanting to fly saw airline emissions rise 23% in just five years.

What are the airlines doing?

Airlines reported climate initiatives across 22 areas, with the most common involving fleet renewal, engine efficiency, weight reductions and flight path optimisation. Examples in our paper include: 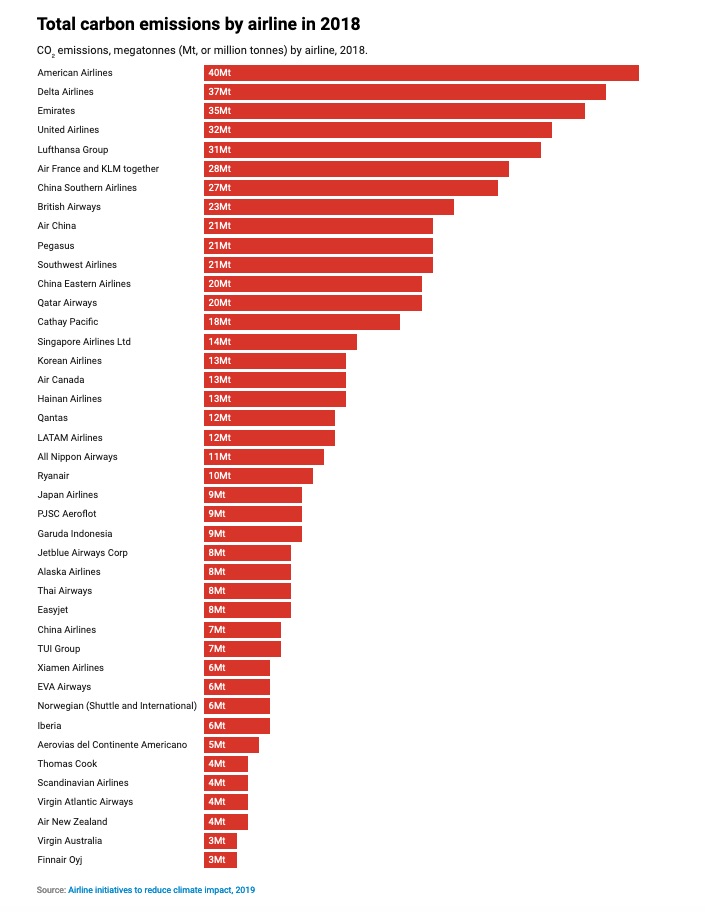 As an example, for Earth Day 2018 Air Canada announced a 160-tonne emissions saving from blending 230,000 litres of “biojet” fuel into 22 domestic flights. How much fuel was that? Not even enough to fill the more than 300,000-litre capacity of just one A380 plane.

Some airlines, including Qantas, are aiming to be carbon neutral by 2050. While that won’t be easy, Qantas is at least starting with better climate reporting; it’s one of only eight airlines addressing its carbon risk through the systematic Task Force on Climate-related Financial Disclosures process.

About half of the major airlines engage in carbon offsetting, but only 13 provide information on measurable impacts. Theses include Air New Zealand, with its FlyNeutral program to help restore native forest in New Zealand.

That lack of detail means the integrity of many offset schemes is questionable. And even if properly managed, offsets still avoid the fact that we can’t make deep carbon cuts if we keep flying at current rates.

What airlines and governments need to do

How you can make a difference

Our research paper was released late last year, at a World Travel and Tourism Council event linked to the Madrid climate summit. Activist Greta Thunberg famously sailed around the world to be there, rather than flying.

Higher-income travellers from around the world have had a disproportionately large impact in driving up aviation emissions. 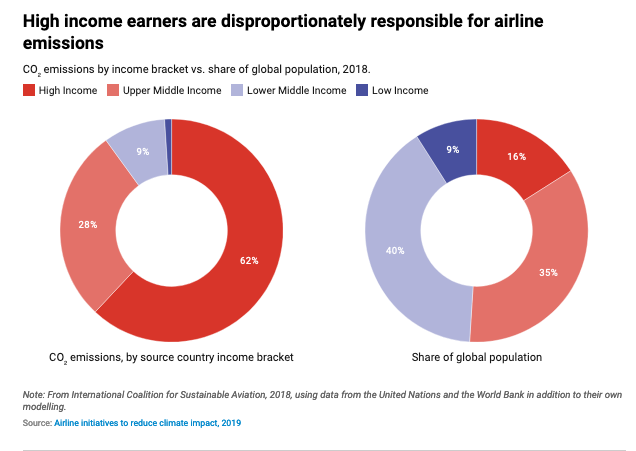 This means that all of us who are privileged enough to fly, for work or pleasure, have a role to play too, by:

To really make an impact, far more of us need to do all three.

Read more: Climate explained: how much does flying contribute to climate change?

• Dr Susanne Becken is a Professor of Sustainable Tourism at Griffith University, Australia, and an Adjunct Professor at Lincoln University, New Zealand. Susanne is a globally recognised expert in the field of sustainable tourism, in particular climate change, resource management, resilience, and environmental behaviour. She acted as a contributing author to the Fourth and Fifth IPCC Assessment Reports of the Intergovernmental Panel of Climate Change and represented Asia-Pacific on the World Meteorological Organisation’s Expert Team on Climate and Tourism.

PrevPreviousPeter Garrett calls for Australia to go onto a ‘war’ footing on climate change
NextGaps can be closed, but only with the right toolsNext