The role of Continuous Quality Improvement (CQI) in improving Aboriginal and Torres Strait Islander primary healthcare will be under the spotlight at a Lowitja Institute conference in Melbourne this week.

Journalist Marie McInerney is covering the conference for the Croakey Conference Reporting Service and in the preview below examines the cultural shift that has occurred around CQI, and details the findings of a new report investigating the factors that help and hinder CQI uptake.

Later in the week, she will report from Congress Lowitja 2014.

Making a real difference for health and healthcare

What has driven a cultural shift towards continuous quality improvement (CQI) initiatives in Aboriginal and Torres Strait Islander primary health, and when and where do they work best?

The 2nd National Conference on Continuous Quality Improvement (CQI) in Aboriginal and Torres Strait Islander Primary Health will this week present CQI approaches and experiences from a diverse range of Indigenous primary health services across Australia to take stock of successes and setbacks and examine what’s needed next.

The discussions follow a recent national appraisal by the University of New South Wales’ Research Centre for Primary Health Care and Equity that showed that a specialist CQI workforce is developing across the Indigenous health sector. It found that while CQI has not been universally adopted as core business, there was “widespread interest and initial take-up” across the sector.

Much of this has come through the work of the One21seventy National Centre for Quality Improvement in Indigenous Primary Health, set up by the Menzies School of Health Research and the Lowitja Institute, which is hosting the conference. It defines CQI as: “a system of regular reflection and refinement to improve processes and outcomes that will provide quality health care.”

One21seventy and National Centre scientific director Ross Bailie says he has seen growing enthusiasm in Indigenous primary health for CQI over the past decade, as more services and staff accept that “it’s not about policing or blaming”.

One of the strongest messages emerging in the program’s surveys of community and health centres is that they really believe that CQI “can make a difference”.

Bailie also believes Indigenous primary health services are leading the way in CQI, in part  because they’re used to being accountable, but also because specific features of CQI suit them well.

“Doctors and nursing staff in Aboriginal community controlled organisations tend to have a more public health and population health orientation and to be part of a larger network,” he said.

“We are seeing greater success with CQI when it’s being done at an integrated level or where we can get systematic data showing practice performance against best practice guidelines – data which we struggle to get more generally in (mainstream) general practice,” he said.

One21seventy is also an important factor, growing out the pioneering Audit and Best Practice in Chronic Disease (ABCD) research project, also steered by Bailie, which ran from 2002-2009 and showed CQI could improve Indigenous health.

It’s credited, for example, with significant improvements in the quality of care and outcomes for diabetes (such as lifting rates of HbA1c testing once every six months from 41 to 74 per cent and the delivery of diabetes guideline scheduled services from 31 to 54 per cent).

ABCD also influenced the Healthy for Life program that collects data from about 100 Indigenous primary health care sites across Australia on essential health indicators and others relating to organisational structure and care provision.

One21seventy was named for its mission to “increase life expectancy for Indigenous people beyond One in infancy, beyond 21 in children and young adults and beyond seventy in the lifespan”.

It has developed a range of clinical audit tools to measure the delivery of best practice service for chronic health conditions and maternal and child health care by more than 200 Indigenous primary healthcare services (see image below – and see the tool in action here). 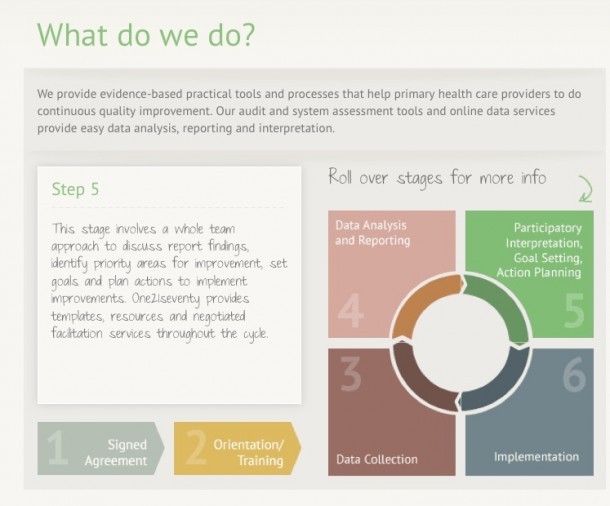 One21seventy will launch a new tool at the conference for improving youth health, and a set of online modules so that health service staff around the country can access training when they want it – another effort, it says, “to overcome the tyranny of distance and cost of workforce development across the Indigenous primary health care sector”.

“Our goal is to make CQI everyone’s business,” she said. To that end, the Lowitja Institute commissioned the University of NSW national appraisal to look at what influences the take up of CQI initiatives in Aboriginal and Torres Strait Islander primary health services.

The appraisal found uptake was assisted by:

The barriers to uptake included:

Similar issues and insights were identified in the June 2013 evaluation by Allen & Clarke of the Northern Territory CQI Investment Strategy being developed and implemented in the NT Aboriginal primary health care sector.

The next step, Bailie says, is to develop and apply a CQI focus not just to the local health centre level but “across the whole system and at different levels of the system”.

“The focus up to now has been very much supporting local primary health care centres to use that information for their own purposes,” he said. “We’re now aggregating that data and analysing it at a state and national and territory level, to identify at a system level what is working well, what are the major barriers to improvement, and what we can do about it.”

The Federal Department of Health looks interested. It’s currently calling for tenders for a summary and analysis of CQI activity on Aboriginal and Torres Strait Islander primary health care, looking to identify “systemic enablers, barriers and linkages relevant to the development of a national continuous quality improvement framework that may be used to support improved capacity.”

The two day conference will:

• Read The Guardian’s profile of Mary Guthrie, general manager of policy and communications at the Lowitja Institute, who is tweeting this week for @IndigenousX. 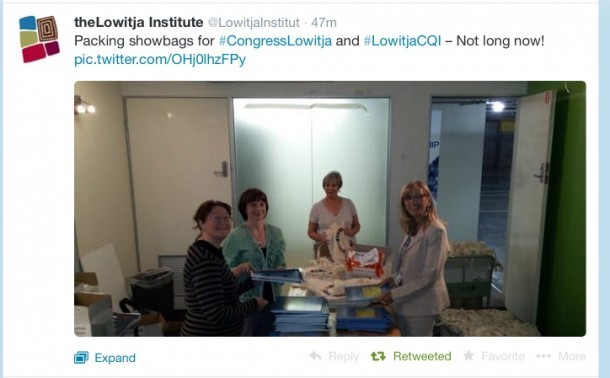 PrevPreviousGambling in a mobile era: a wrap on last month’s 5th International Gambling Conference in NZ
NextClearing the air on managed careNext