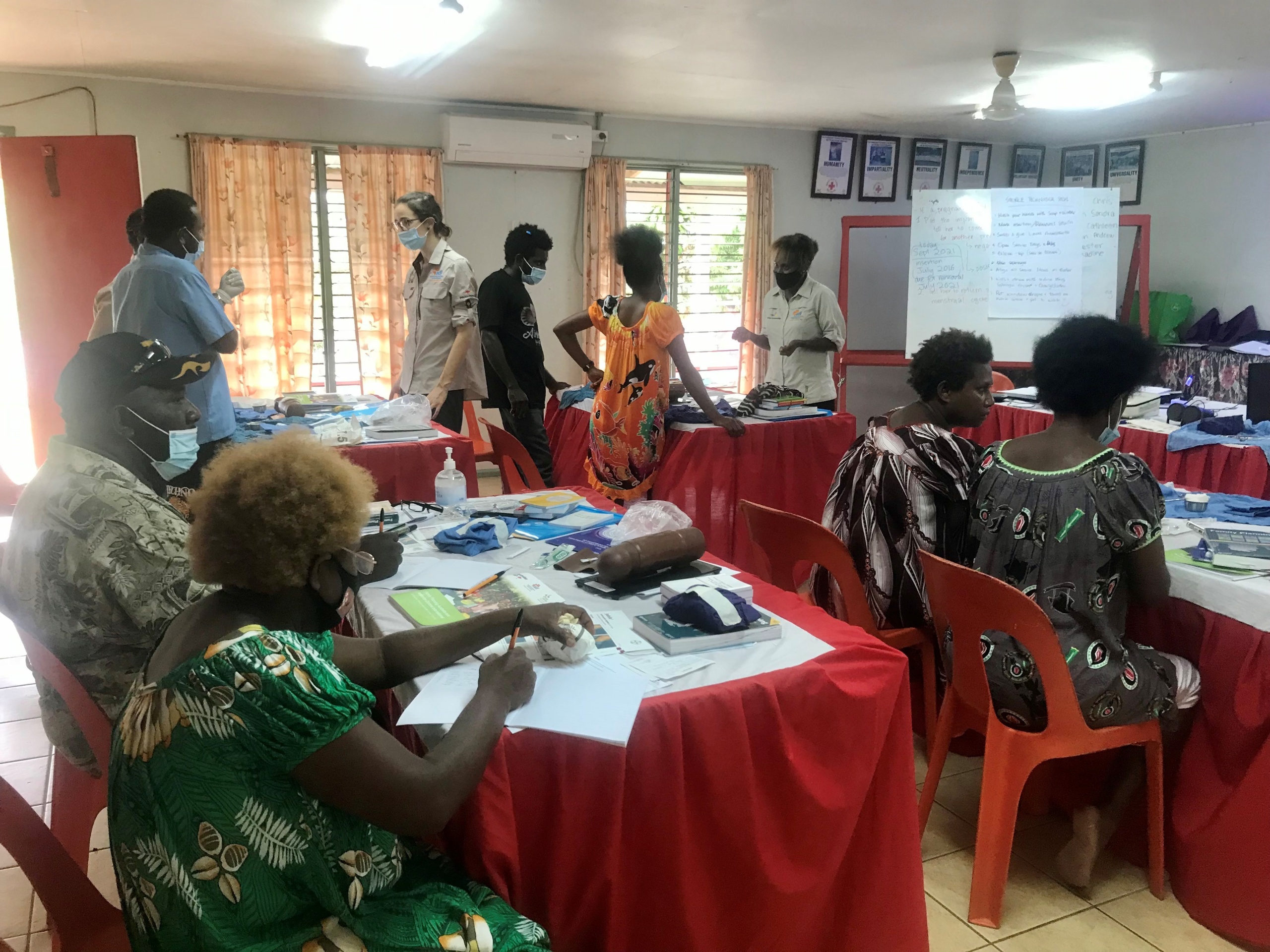 Introduction by Croakey: The death toll from a 7.6 magnitude earthquake in Papua New Guinea’s north-west on Sunday is expected to rise as authorities try to reach remote areas of the country.

Multiple injuries have been reported as well as significant damage to infrastructure, internet and communications.

A statement by Prime Minister James Marape said provincial and national disaster response teams will assess the scale of damage and that the National COVID hotline will be repurposed “for people affected by the earthquake to call to report damages and impacts”.

The earthquake puts the spotlight on some of the challenges in delivering and receiving healthcare in Papua New Guinea.

The highlight of Dr Alison Brown’s three stints as a volunteer doctor with Australian Doctors International (ADI) in Papua New Guinea in 2020 and 2021 was working as part of a team with the local health and community workers on outreach patrols.

Brown was based in Kavieng, the capital of the province of New Ireland, and spent half of each month travelling to remote areas on outreach patrols. The patrols, a collaboration between ADI and the Provincial Health Authority, involve a team of health and logistics staff who deliver education, health promotion, screening and clinical services to communities in remote areas.

“Everyone had their different interests and strengths and roles to play,” Brown said. “We came from different cultural and educational backgrounds, but we all had the same goal of carrying out effective outreach patrol programs to parts of New Ireland.”

ADI CEO Mimi Zilliacus said ADI has been working in PNG for 20 years to improve the health of rural communities.

“Our programs have a strong focus on working in partnership and building capacity so that we have a sustainable impact on the health system over the long term. The volunteer doctors who work with us leave behind a legacy that remains long after their time in PNG,” Zilliacus said.

During her general practice training in Victoria, Brown studied a Master of Public Health, an experience that attracted her to working in Papua New Guinea because she was interested in the social determinants of health and in seeing medicine in a different context.

That experience in public health served her well during her time in Papua New Guinea.

“I had an understanding of the determinants that come together to affect someone’s life course or health outcomes – such as geography, economic circumstances, culture and colonialism,” she said.

With volunteer doctors unable to visit Papua New Guinea for much of 2020 and 2021, ADI accelerated the move to localisation with programs in each province led by local PNG program managers and teams.

Now, with the easing of COVID-19 restrictions and expansion of its work to other provinces, ADI is ramping up its volunteer doctor program to support local health staff and services.

ADI senior program manager Kay Nevill said doctors considering volunteering for ADI should have experience of working in low-resource settings where they had to make decisions without being able to call on a senior doctor. Rural generalists are usually a great fit for the role.

ADI encourages doctors who have only worked in a major referral hospital to do rural locums or work in a regional hospital before applying to ADI.

Nevill said doctors who have an appreciation and interest in public health are most suited to working in Papua New Guinea.

“It’s primary health care, but it’s seen through a public health lens, so for the doctors to get the most out of it and also contribute the most, it’s good to have both,” she said.

“As well as delivering health services, if they can see the issues and see what causes them – the determinants of health – they can work with our teams and with the communities to be aware of that and to implement change.”

Outreach patrols are a vital part of ADI’s work in Papua New Guinea because most people live in rural and remote areas where the nearest health centre could be a day’s walk away.

Most of the health facilities are short on staff. There are many maternal and infant mortality and morbidity issues. We have issues of an HIV/AIDS epidemic, and lack of availability of testing and common drugs to help in the very remote areas. The outreach visits are a vital service to communities.”

Silakau said working with ADI volunteer doctors in the patrol team helped to build the capacity of local people and that it was a “luxury” to be able to refer patients to the doctor.

The learning works both ways, Silakau said. “We learn a lot from the doctor about attending to sickness and injuries and pregnant women, and also the doctors learn from us about how we improvise when we don’t have proper equipment or medicine in a struggling health system.”

Silakau said she had seen the impact of Brown’s input during outreach patrols to train health staff to identify illnesses and to manage them. “When I went back to the health facilities this year, I saw an improvement, and staff are able now to identify people with illnesses such as diabetes and hypertension. They can pick out the basic signs and refer earlier.”

Last year, Brown and Silakau were part of an outreach patrol to Tanga Island to the north east of New Ireland, where they found high rates of probable tuberculosis in adults and children, worse than they had found elsewhere in the province.

Several sick patients had not continued their tuberculosis treatment course in the past and many others had symptoms consistent with the disease.

Brown and Silakau noted that most patients who had suspected or diagnosed tuberculosis would be going without investigations and treatment. There is no access on Tanga to chest X-rays or PCR tests and travel to the referral hospital at Kavieng is unaffordable for most people – it takes two days to reach Kavieng by boat and car.

Brown said a “confluence of possible factors” had come together to create the high rates of tuberculosis on Tanga Island, which has a population of more than 10,000.

Those factors include poverty, overcrowding, geographical barriers, insufficient staff and facilities at the health centre, lack of referral pathways and support for patients to receive diagnosis and treatment.

She said undertreatment of the disease was likely perpetuating the problem, with ongoing transmission of the disease within families, and increased risk of drug-resistant tuberculosis.

Since the patrol, Silakau negotiated with the Provincial Health Authority to arrange for a laboratory technician to join the outreach patrol to screen people on Tanga Island for tuberculosis and to start treatment where needed.

Brown said ADI’s approach of working with Provincial Health Authorities and building local capacity attracted her to volunteering for ADI.

“I worked for ADI because they have sustainable vision of what healthcare improvement looks like. They have close relationships with Provincial Health Authorities and maintain lines of communication and agreements with them about how we can support one another to improve capacity, as opposed to being a parallel health service coming in and doing things for them,” Brown said.

“That’s reflected in the fact that a majority of ADI staff are New Irelander or PNG local staff who are building up their skills.”

Zilliacus said ADI’s approach is to improve access to health care by taking services closer to where people live, and working with local governments and communities to strengthen the existing system rather than trying to build a separate health service.

ADI works in partnership in a co-delivery model with the Provincial Health Authorities to deliver programs that are led by the Authorities, she said.

“It all has to align to their programs, their priorities, their annual plans. We are there to support and to supplement and to build capacity.”

Brown, who studied tropical medicine in the UK after working in Papua New Guinea, said the experience with ADI was rewarding professionally and personally.

“It’s a really great opportunity to expand your understanding of global health and the living experience is fantastic,” she said. “I found Papua New Guinea just the most beautiful country in the world. I love the tropical waters, the food and the friendly people and I felt safe. The experience is something that I really treasure.”

Marge Overs is a consultant health writer and editor with experience in journalism, health publishing and research communications. Originally a journalist, she has worked in senior roles in medical publishing, non-government organisations and research centres. Marge has focused on public health communications since completing a Master of Public Health at the University of Sydney

PrevPreviousPutting the spotlight on environmental health expertise and challenges
NextHeal Our Way: supporting Aboriginal and Torres Strait Islander people to have safe conversations around suicide preventionNext