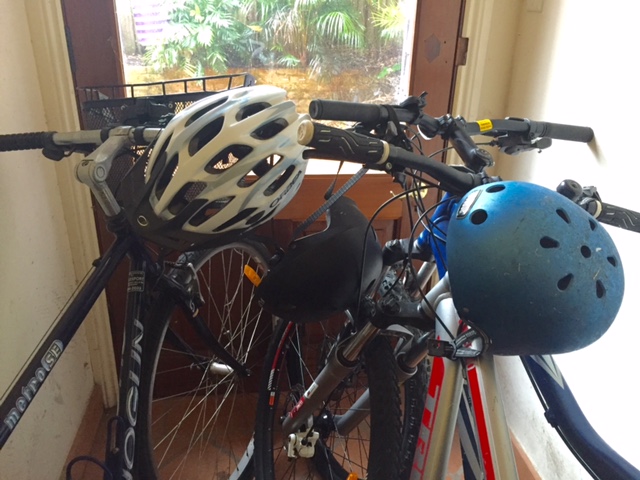 Mandatory bicycle helmet laws in Australia: is it time for a change?

A 2011 survey, conducted by The National Heart Foundation and the Cycling Promotion Fund, found that 60% of respondents had access to a bicycle, but most rarely used it.

Only 17.3% bike owners had ridden in the past month, and 28.5% couldn’t recall riding in more than a year. That’s a lot of bikes in sheds and garages, hanging on walls or under the stairs. It’s a lot of plans for fitness and environmentally sound transport abandoned. It’s disappointing but ultimately understandable.

Having spent a few years joyfully bicycling around Canberra, and a many more years riding sporadically and nervously in inner Sydney, I can relate to the reasons given in the survey for not riding more often. Unsafe road conditions, traffic, and a lack of cycling lanes and trails topped the list. But down at number ten (with 16.5% of respondents who had ridden in the past month agreeing that it discouraged them from riding a bicycle more often) was the mandatory requirement to wear a helmet.

Call me safety girl, but never once have I stood contemplating the parade of improbably large utility vehicles speeding down my narrow street and thought, “Nah, I’ll take the car today; that helmet is such a drag.” It’s the spectre of crunching metal and skin on gravel that keeps my bike gathering dust. When it comes to our own behaviour, we assess risk in complex ways.

The authors of the post below are experts in active transport, and proponents of the greater good for the most people, when it comes to cycling. They acknowledge that helmets protect heads, but urge a rethink on the blanket laws.

Whether you agree or not, it’s a compelling and well-argued read, and the ultimate goal of enabling more people enjoy the simple pleasure, and the health benefits, of cycling is a laudable one.

Let us start off by saying that the evidence is clear, and this article does not dispute that helmeted cyclists are less likely to acquire a head injury in the event of a collision with a motor vehicle or fall. Rather, this article aims to ascertain whether an all-ages, all-areas MHL is effective public health policy, and whether the adverse consequences of such a law are worth the trade-offs when the relative risks are considered. The utility of wearing a helmet comes down to the risk of a collision with a motor vehicle or fall occurring: a helmet will not prevent the rider from being hit by a motor vehicle, or falling from their bicycle.

What is the risk of a fall, or collision with a motor vehicle?

The impact of the introduction of MHL

Australia was the first country to make wearing helmets while cycling mandatory. Laws were introduced between 1990 and 1992 by Australian States and Territories following campaigning by various groups, including the Royal Australasian College of Surgeons.  To date, Australia (excl. Northern Territory), New Zealand and the United Arab Emirates are the only countries in the world to have enforced, all-ages, all-areas MHL. Similar laws have since been introduced in some jurisdictions around the world, and then repealed including in Israel and Mexico, and most recently Bosnia and Herzegovina.

Figure 1, using Western Australian (WA) data, shows that the long-term decline in cyclist head injuries can be attributed to general road safety improvements. All road users experienced reductions in injuries, and specifically head injuries, through the seventies and eighties. This was attributable to strategies such as driver education, enforcement of speed limits, road improvements and random breath testing. Everyone benefited, including cyclists. After MHL came into effect in 1990-1992, there were no further safety improvements to head injuries for cyclists or any other road user.

Studies from other jurisdictions that have trialled MHL (such as in Canadian Provinces) have found minimal reductions in rates of hospital admission for head injuries among cyclists. Worse still, cyclist deaths in New Zealand rose from 24% of pedestrian deaths pre-MHL (1990) to 49% post-MHL (2006-09) after accounting for changes in hours cycled and walked; and saw the average injury risk per hour cycled increase by 20%.

To complement the above analysis of WA, we graphed comparative state-level Australian Bureau of Statistics census data on rates of commuter cycling from 1976-2011. The graph shows a steady increase in rates of cycling to work in WA, followed by a steep decline upon introduction of MHL which has never recovered.

The Northern Territory (NT) introduced MHL in 1992, around the same time as other Australian States and Territories, but in 1994 made a helmet exemption for adults cycling along footpaths and on cycle paths. The NT therefore represents a case study of the impact of relaxing MHL on cycling participation rates in Australia. Figure 3 shows that NT has the highest rates of commuter cycling to work in Australia at 3.4%, 2.6 times the 1.3% of prevalence shown across Australia. Further analysis also shows that NT also has the highest gender equality among commuter cyclists, with NT females making up 37% of total riders, compared with 26% in the rest of Australia. The Australian Capital Territory’s cycling level can be attributed to its significant cycling infrastructure.

Only three jurisdictions in the world have both MHL and a public bike-share scheme. Seattle closed their scheme earlier this year, with the recent commissioner of New York City Department of Transportation stating “NYC has no helmet law, 38 million bike share trips & 0 deaths. Seattle has a helmet law & 1 dead bike share system”  It’s no surprise that ridership for Melbourne and Brisbane’s bike-share schemes are among the lowest in the world, with MHL consistently cited as a deterrent to their use.

Why MHL are a bad idea

An Australia-wide survey of cycling behaviour by the Cycling Promotion Fund found as many as one in six cyclists cited helmets as a barrier to cycling more. Another study of Sydney residents found 23% said they would cycle more if they didn’t have to wear a helmet all the time; with even conservative estimates suggesting that removing the law could double the number of people currently cycling in Sydney.

The mechanisms by which MHL deter riders fall beyond, as some have suggested, simply “inconvenience”. Empirical evidence suggests that at least part of the reason why MHL do not appear to be beneficial is that they disproportionately discourage the safest cyclists. An all-ages, all-areas MHL posits that all cycling is equally dangerous, and perpetuates a culture of cycling as a dangerous activity.  In other words, when cyclists are seen in what would normally be considered a safe environment wearing personal protective equipment, it suggests that cycling in itself is inherently dangerous.

Similarly, a 2013 QLD inquiry into cycling issues stated that there was insufficient evidence of the safety outcomes of compulsory helmet wearing to justify the mandating of helmet wearing for all cyclists of all ages regardless of the situational risk. Further, the Committee was concerned that the introduction of MHL may have had an unintended, adverse impact on cycling participation rates in Queensland and therefore the overall health of the state.

MHL represents an individualistic approach to risk management (or even “victim blaming”), rather than removing the risk to begin with via installation of safe cycling infrastructure, and road user education.

Consistent with the QLD inquiry into cycling Issues, we recommend a trial of relaxing MHL for those aged 16 years and older who are cycling on shared paths, bike paths, and on roads with speed limits of 60km/hr or less; and that an independent, empirical evaluation of that trial is undertaken to quantify the impact of MHL in Australia.

*Dr Jerome Rachele is a Research Fellow at the Institute for Health and Ageing, Australian Catholic University. His research centres around investigating causal relationships between the built and social environment and health using data from longitudinal studies and natural experiments. On twitter @JN_Rachele

*Dr Hannah Badland is a Principal Research Fellow at the Centre for Urban Research at RMIT University. Her research focuses on examining and evaluating associations between health behaviours and outcomes, the physical urban environment, and transport at the neighbourhood-level.

*Professor Chris Rissel is a Professor of Public Health at the School of Public Health, University of Sydney. His current research interests focus on obesity prevention and active transport, cycling advocacy, tobacco control and sexual health.

PrevPreviousCalling for national action for justice, and wrapping the news from Close the Gap
NextWhy ‘green-black’ alliances are less simple than they seemNext