Mapping healthcare variation in Australia: where, what and why

A number of countries – the United States, United Kingdom and New Zealand – have developed resources to better understand some of the complexities behind variation in healthcare and to drive improvements in the quality and safety of care.

Today Australia joined their ranks with the release of the first Australian atlas of healthcare variation by the Australian Commission on Safety and Quality in Health Care.

The Commission says that some variation is expected and associated with need-related factors such as underlying differences in the health of specific populations, or personal preferences, however “the weight of evidence in Australia and internationally suggests that much of the variation documented in the atlas is likely to be unwarranted.”

“Understanding this variation is critical to improving the quality, value and appropriateness of health care.”

In the post below, the Commission’s Senior Medical Advisor Dr Anne Duggan reports that the atlas has found marked variation, particularly in the prescription and dispensing of Attention Deficit Hyperactivity Disorder (ADHD), antidepressant and antipsychotic medicines, and high use of some investigations and procedures where there is evidence of limited benefit.

She writes also that the atlas challenges the system to justify its current use of taxpayer funded resources where there is known benefit but clear variation, for example MBS services for colonoscopy.

The Australian Medical Association said the atlas is a “welcome starting point for further research and examination of health service distribution” but it warned in this statement that it was “not proof that unnecessary or wasteful care is being provided to Australians, and should not be interpreted that way.”

See also this article by a pioneer in the field of unwarranted variation in healthcare, John Wennberg, saying that much of the variation in use of healthcare in the UK and US is accounted for by the willingness and ability of doctors to offer treatment rather than differences in illness or patient preference. 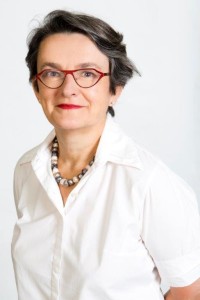 Today, Australian Health Minister Sussan Ley launched the first Australian atlas of healthcare variation. The atlas is destined to generate investigation into reasons for variation, debate about appropriateness of care, and action to change policy and practice where required.

The overarching aim of the atlas is to identify and reduce unwarranted healthcare variation and promote delivery of care that is appropriate and based on patient need, preferences and likely benefits. This is the first of a series of atlases to be published by the Australia Commission on Safety and Quality in Health Care. Publication of these data should help drive efficient and equitable allocation of health care resources, improve health outcomes for all Australians and improve value in the healthcare system.

The atlas follows the Commission’s publication Exploring healthcare variation in Australia and involvement in an international study of variation led by the Organisation for Economic Cooperation and Development. This work stimulated debate when it identified that Australia had higher treatment rates for a number of procedures than many of the other countries participating in the study. There was also substantial variation in the rate of many procedures within Australia.

The current atlas contains 36 items that clinical experts, consumer representatives, the Commonwealth, States and Territories have put at the top of their list:

Clinicians will be pleased to see routine health care data sets being used, including the Admitted Patient Care National Minimum Data Set (APC NMDS), Medical Benefits Scheme (MBS) and Pharmaceutical Benefits Scheme (PBS) data. Analysis has been completed by place of patient residence (not where services were provided). This has allowed assessment of the impact of both remoteness and socioeconomic status on investigations and procedure volumes and rates.

The atlas found marked variation between areas with the highest and lowest rates. In particular:

There is high use of some investigations and procedures where there is evidence of limited benefit. For example, for the item examining knee arthroscopies in over 55 year olds, the majority of patients would be expected to have osteoarthritis. There is strong evidence that knee arthroscopies have limited benefit in patients with knee osteoarthritis and can cause harm.

The atlas also challenges the system to justify its current use of taxpayer funded resources where there is known benefit but clear variation. For example, MBS services for colonoscopy, where there was a 30 times variation between the area with the highest rate compared with the lowest. Colonoscopy forms part of the national strategy for reducing colorectal cancer, a largely preventable cancer which is currently the second most common cause of cancer death in Australia. MBS-funded cataract surgery also had a seven times variation. The findings for both procedures highlight the challenges in accessing appropriate care especially in rural areas.

Australia has one of the best healthcare systems in the world with easy availability of many pharmaceuticals and technology not seen in some other countries. However the volumes and variation in rates of medicines dispensed and use of some investigations and procedures shows there is opportunity for action to get more evidence based, equitable care.

In some cases of variation there will be obvious explanations. For example, PBS data does not capture medications dispensed through some rural, remote and Aboriginal health services and so rates of prescribing in some remote areas will reflect this. We also know that some level of variation in healthcare use is explained by factors such as differences in population need or health status or patient preferences. However, the key point for all Australians is that unwarranted variation (variation that is not related to patient need or preference) may mean some people are missing out on beneficial healthcare interventions or others are receiving inappropriate or unnecessary care. In Australia we know the impact that lack of access to appropriate evidence-based care has on life expectancy, particularly for Aboriginal and Torres Strait Islander peoples.

Addressing unwarranted healthcare variation has the potential to not only lead to safer, but also more equitable, health care with higher quality outcomes. The issue is clearly not necessarily one of more resources because there is growing recognition internationally that more health care is not necessarily better care. The real challenge is to identify appropriate rates of medical interventions based on patient need and preference and evidence of benefit. This requires action at a number of levels. Within the atlas, the Commission lists a large number of recommendations involving consumers, clinicians, system managers and policy makers. Their challenge now is to successfully “conduct” this vast orchestra to achieve what clearly sounds appropriate.

Dr Anne Duggan, FRACP, is Senior Medical Advisor at the Australian Commission on Safety and Quality in Health Care

Declaration: Croakey editor Melissa Sweet contributed to some of the preliminary writing of sections of the report. 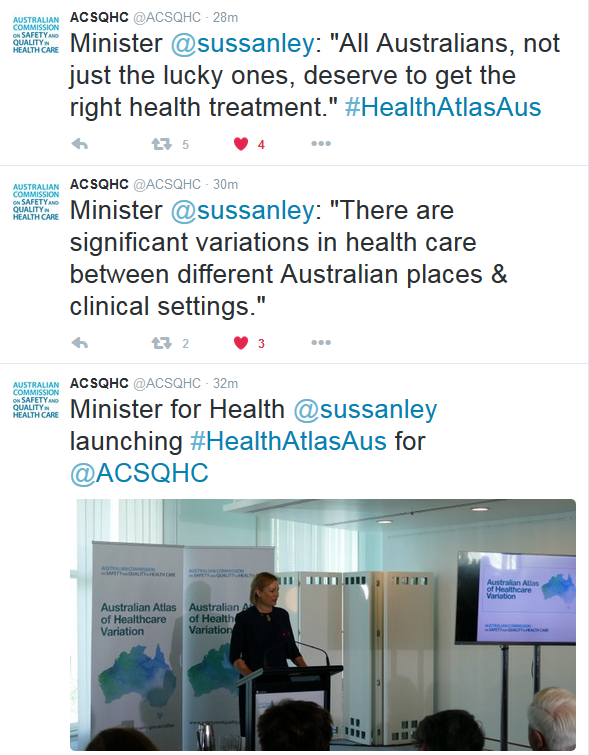 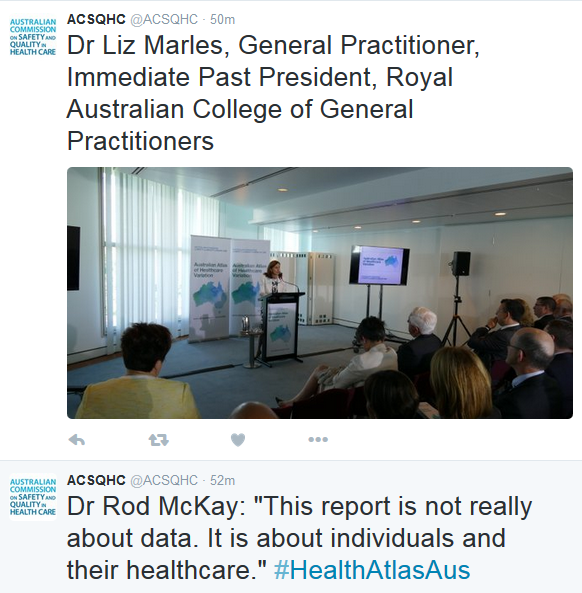