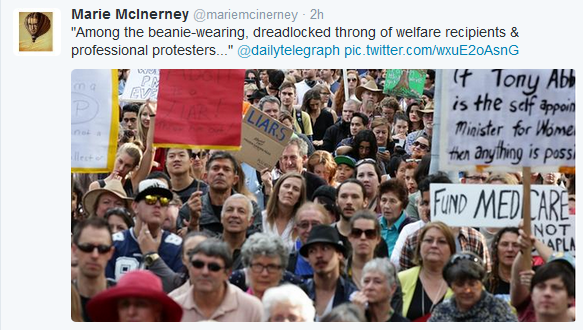 With the headline “Ferals revolting“, Sydney’s Daily Telegraph couldn’t resist the way it characterised the weekend’s #MarchinMay protests, which saw tens of thousands of people marching in cities across Australia against last week’s Federal Budget:

Among the beanie-wearing, dreadlocked throng of welfare recipients and professional protesters, some looked out of place. One of those was Dr Sophie Bernard, 59, from Five Dock, who carried a sign saying: “I am GP not a tax collector.”

“I am horrified by the Budget,” she said.

But its own photo (see tweet above) and alliterative acknowledgement that “doctors and delinquents stood shoulder to shoulder” in the protests points to the growing alliances building against the Federal Budget measures.

As today’s polls and just some of the tweets from the #MarchinMay protests also show below, the Federal Government has managed to unite the “strife of interests” in the health sector and the broader community against a Budget that would spell the end of universal health care and unfairly hit poorer and more vulnerable Australians.

Fairfax media today published analysis by Peter Whiteford and Daniel Nethery that replicates the family outcomes statement that was missing from this year’s Budget, for the first time since 2005.

It shows the breakdown of impact, from an unemployed 23-year-old who loses $47 a week or 18 per cent of their disposable income to the $24 per week, or less than 1 per cent of disposable income, paid through the deficit levy by an individual on three times the average wage – close to $250,000 by 2016–17. They note that high-income couples could together bring in up to $360,000 a year and not contribute an extra cent.

Many at the marches agreed with social researcher Hugh Mackay’s analysis that the Budget not only turns its backs on the problem of inequality, it exacerbates it.

It’s not the economics; it’s not the politics; it’s the clear sign that this government has young people, the sick, the poor, the unemployed, the elderly and the marginalised in its sights. 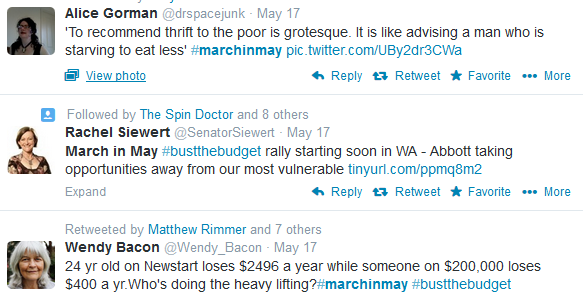 This growing inequity will of course particularly hit Aboriginal and Torres Strait Islander people, amid growing expectation that the Budget measures (in health and beyond) will widen the gap between Indigenous and non-Indigenous Australians.

The Central Australian Aboriginal Congress has warned it can’t risk passing on the GP co-payment to its patients so will have to absorb it, at a cost of $1 million per year. Other Budget measures also put Aboriginal health, housing, justice and education at risk.

Beyond the individual pain, the Budget has taken a wrecking ball to the health system – not to mention years of hard work on the national health reform negotiations – and taken us back to the bad old days of blame game and cost shifting, with  Premiers calling for voters to lobby the Coalition party room and Senate to defeat the cuts.

As Michael Woodhead observed, there’s also something Orwellian about the way the Federal Government is talking through the politics of its decisions, with Prime Minister Tony Abbott explaining today in an ABC interview:

‘I’m talking to them all the time. I talk to the premiers all the time. The changes are not cuts; they’re just a reduced rate of growth in spending.

‘There are no cuts to health or education. In health, all of the money we are saving is going into the Medical Research Investment Fund and that’s going to be dedicated to finding the treatments and the cures of the future that we need if our population is to live longer and better.’

And beneath the politics are the questions of why and how – where’s the policy that supports the drastic measures being taken (particularly the $GP co-payment which is described by medical ethicist David Hunter as “zombie policy” that is in no way justified by the “unfair and unethical” proposal to use it to fund medical research)?

As the tweets below show, there was no question of the diversity of the crowds taking part in #MarchinMay – and no question that the media would again miss the significance of the opposition as they did at the earlier #MarchinMarch event. 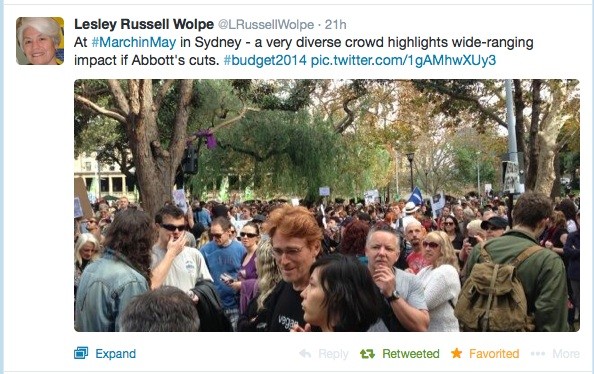 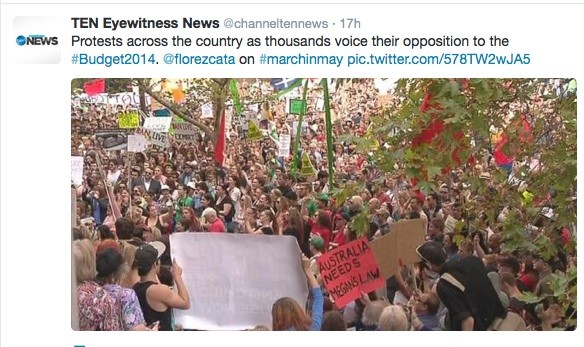 In case you missed it: Thousands have gathered across Australia to protest against the federal budget. Your pics: http://t.co/kRU2WF796C

It was clear too that Abbott and Health Minister Peter Dutton face big community concern on the dismantling of universal health care and the impact of the GP co-payment. 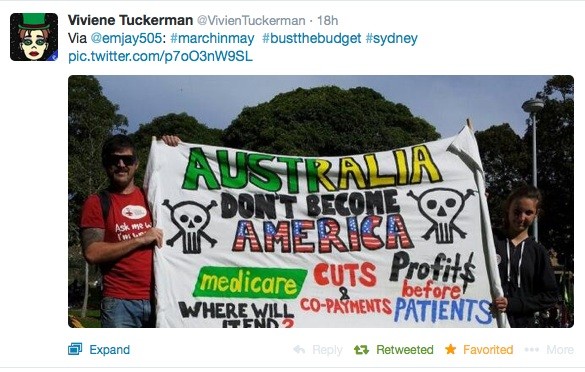 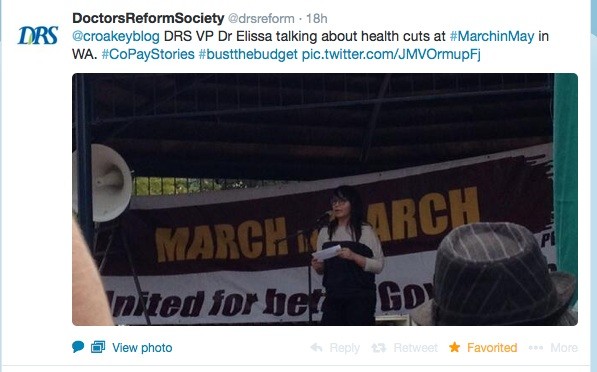 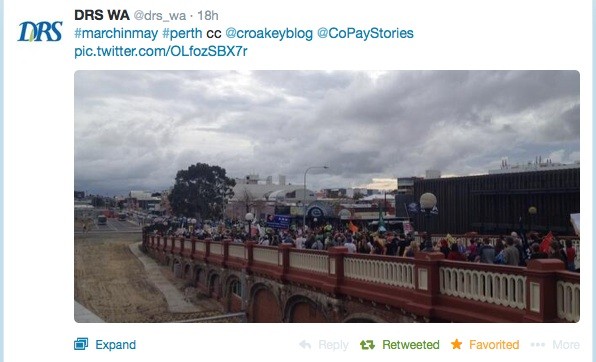 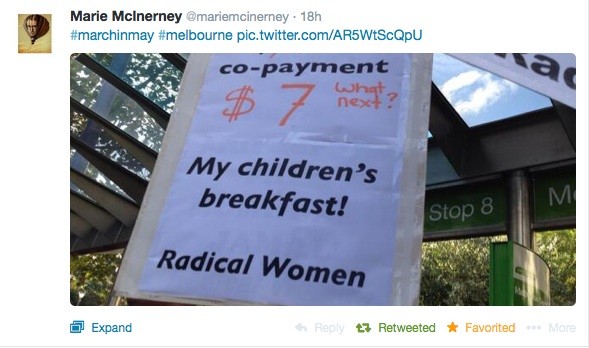 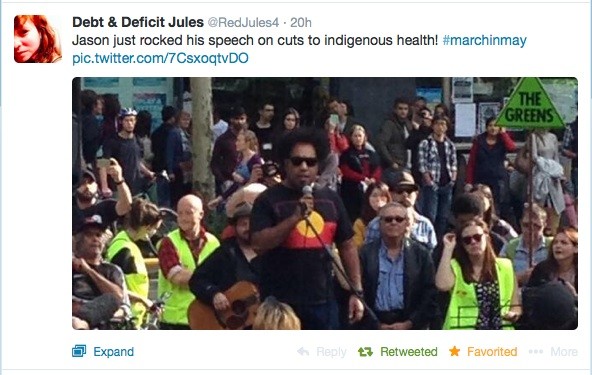 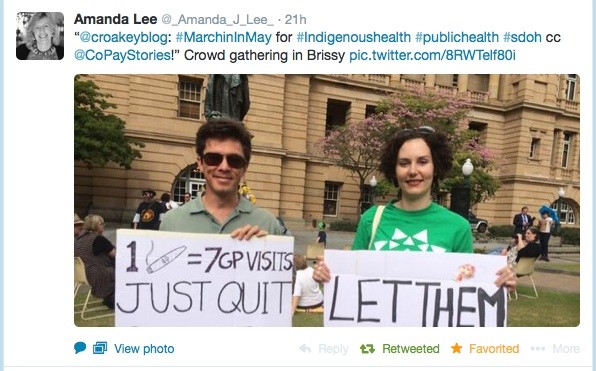 And some more tweets, photos and chance to check out some speeches: 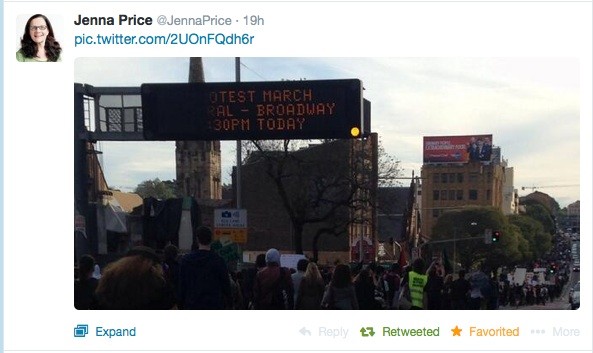 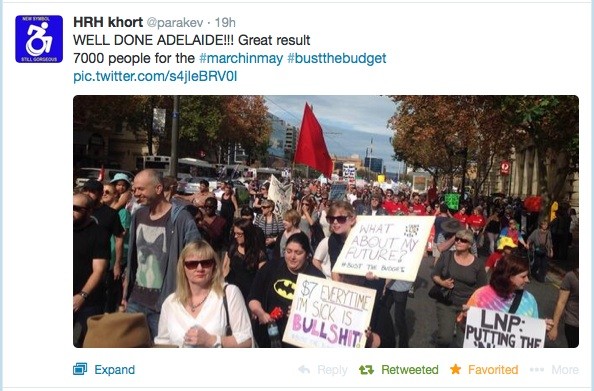 Miss the #marchinmay to #bustthebudget yesterday? Here is the Sydney demo in 15 sweet minutes! https://t.co/tqdubU4cN8 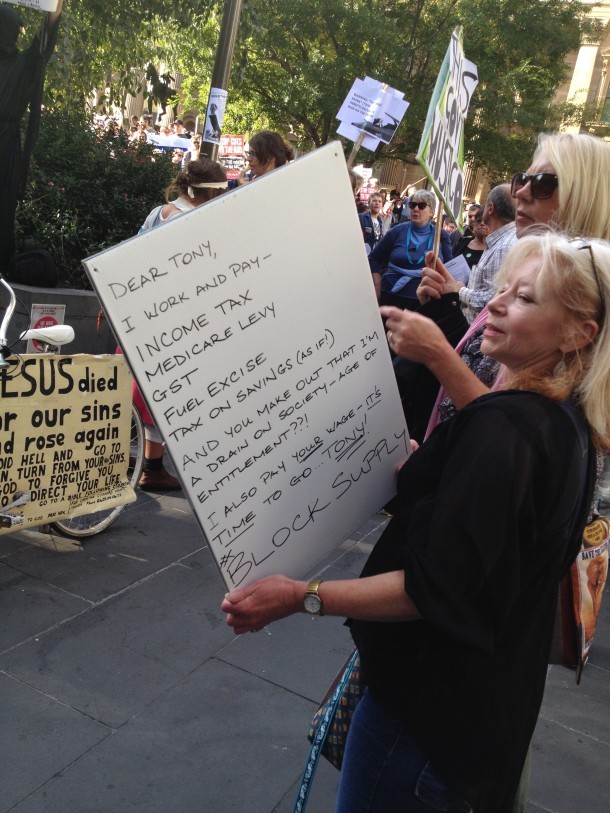 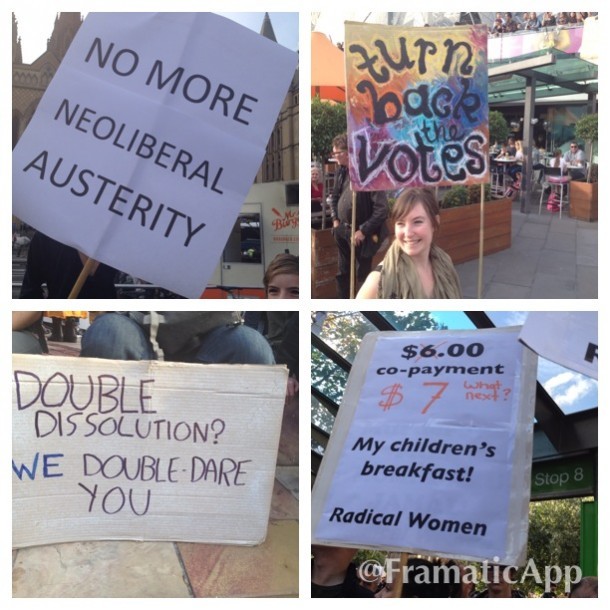